Are Bachelorette Brooke Blurton and Darvid Garayeli still together? 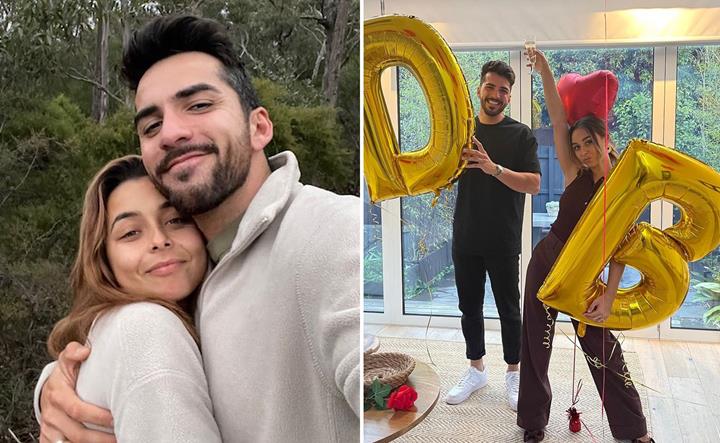 Brooke Blurton went on The Bachelorette to find “her person” and it looked like she did with beau Darvid Garayeli, who was a fan-favourite from the start.

Arriving on a lawnmower, the landscaper promised Brooke three wishes and declared himself her “Persian Prince” all on the first night – and the Bachelorette was smitten.

Their romance developed over the season and when Darvid stepped out of the car at the finale, everyone watching at home knew it was love.

But Darvid confessed to Now To Love that he wasn’t sure Brooke was going to choose him: “For a couple of minutes there I was like, ‘all right, I’m actually about to get my heart broken’.”

“He literally thought I was breaking up with him,” Brooke said, but he was so wrong. “I just wanted to say ‘I love you’ and scream it.”

The pair were so loved-up during our interview that even they poked fun at it, joking “yuck” after Brooke said: “I wholeheartedly like truly love Darvid!”

But where are the couple now, months after filming wrapped and they’ve moved out of reality TV land and into the real world?

Despite Darvid relocating from Queensland to Melbourne to move in with Brooke in November, the couple have since parted ways.

In January, the 2021 Bachelorette winner took to Instagram to confess, “unfortunately Brooke and I have parted ways. Whilst we both genuinely thought we were each others person, things change and thats okay.”

Brooke then shared her own Instagram story afterwards, that read, “Hey beautiful people, before my phone blows up. I just want to say right now I’m finding this really quite overwhelming and just as surprising to me as you guys.

“I just woke up to the news. It was definitely agreed to part ways. I just wanted to do it privately, amicably and respectfully.

“This is not how and what I expected to be doing right now so as you can imagine, this is all a lot.

“You will all have your judgements and have your say but there is a lot going on in my world and D’s of course. So I again just ask you be kind, we are human.

“I really do hope you respect some part of some what ‘privacy’ we do have right now because like I said, this was a surprise to wake up to just as much as it was for you guys.

“For now, tuning out but we will speak soon, B.”

They may be over, but we’ll always have the memories! Keep scrolling for Brooke and Darvid’s best moments as a couple.