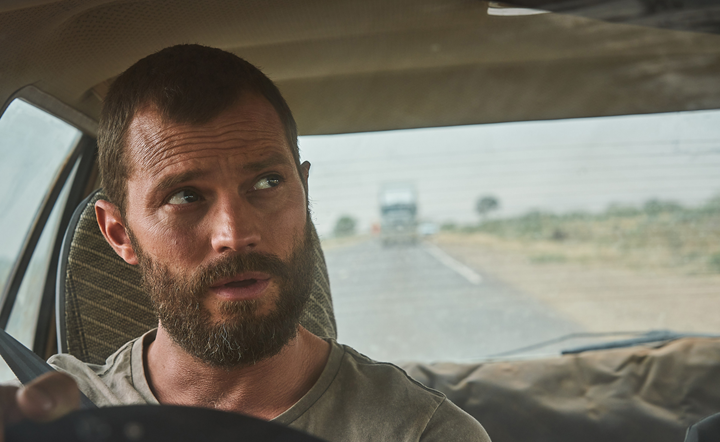 Driving along a remote road in the outback, a man finds himself being pursued by a large truck that crashes into him. He wakes up in hospital with no idea of who he is and what he, an Irishman, is doing there.

This is the dramatic opener of a six-part thriller by acclaimed writing brothers Harry and Jack Williams (Baptiste, The Missing), starring Jamie Dornan in the lead role. As “The Man” searches for his identity, he needs to quickly unravel the puzzle because killers are on his trail.

“Usually, when you read the opening pages of a script you get a sense of who this person is, the sort of life they have, the family they have, the job they have and what their intentions are,” Jamie, 39, best known for Fifty Shades Of Grey and The Fall, tells TV WEEK.

“But with this, there was none of that. It was exciting to have the story revealed to me, bit by bit, in the same way as it will to the audience. ‘The Man’, as we call him, has an instant affinity with probationary police officer Helen Chambers [Danielle Macdonald] and cafe waitress Luci [Shalom Brune-Franklin], who he feels may be able to help him find answers.

“It’s a very heightened and unreal drama at times – and there’s comedy in it, often found in the darkest of places.

“It was very challenging to film. There were a lot of stunts and I tried to do as much as I could. I got thrown around quite a lot. It was scorching hot when we got there and filmed that opening scene and then, towards the end of the entire shoot, the weather changed and we were freezing cold!”

On top of that, because of deadly brown snakes, the cast and crew were advised to have bands around the bottoms of their pants when not on camera to prevent them from slithering up.

“You’re dealing with the isolation of being in the outback, staying in a whitewashed town with not much to do but play pool at the pub,” Jamie says.

This wasn’t the actor’s first visit to Australia, although he admits he didn’t get to see that much first time around, as most of his time was
spent drinking! “I went to Sydney for New Year’s Eve 2008 going into 2009. Two really good mates in Belfast [Jamie’s home town in Northern Ireland] moved there after uni. So we just went on the lash for nine days, slept on a mate’s floor and didn’t really see that much.”

When we tell him that writers Jack and Harry thought that casting him in a drama that was a bit more comedic than he was used to showed a different side to him, he roars with laughter.

‘They obviously didn’t see [2021 comedy film] Barb & Star Go To Vista Del Mar. Thanks, Jack and Harry!” he says with a laugh. “When I first moved to LA, I only wanted to do comedy, but was taken on this very different path, playing a psychopath [Fifty Shades Of Grey].

“I got back with Barb & Star. With The Tourist, I was presented with this merging of all kinds of different worlds, not just drama and comedy. There’s all sorts of stuff in there.”