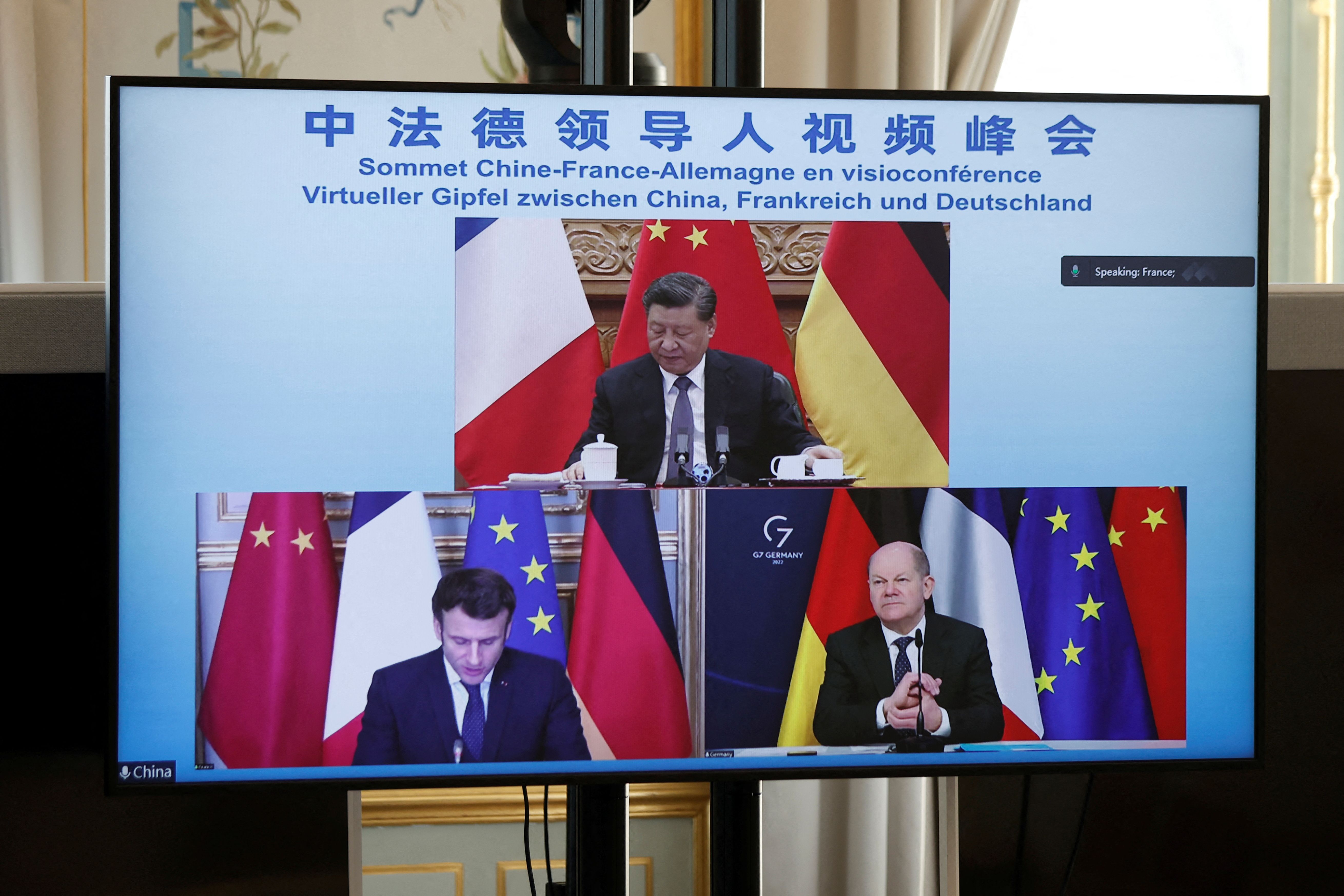 The president of China, Xi Jinping, has called for “maximum containment” in Ukraine on Tuesday, where he considers the situation “worrying”. The priority, he has pointed out, must be “to prevent the tense situation from escalating or even getting out of control.” Xi made the remarks during a virtual meeting with German Chancellor Olaf Scholz and French President Emmanuel Macron, according to a statement distributed by the Foreign Ministry in Beijing. “China deeply deplores to see a new war in Europe,” said the Chinese president, in what represents his most direct public comments so far on the invasion of Ukraine. “China praises the mediation efforts of France and Germany in Ukraine. It will remain in communication and coordination with both of them and with the EU, and in light of the needs of the parties involved, actively cooperate with the international community,” Xi added.

Russia’s best partner is rapidly shaping itself as a key player in the conflict 6,500 kilometers from its capital, amid expectations that it may end up playing some kind of intercession role. Beijing is among the few governments that currently maintain a good relationship with the Ukrainian and Russian authorities. And it is the only one with real capacity to put pressure on Moscow.

At the meeting, the Chinese leader stressed that the Chinese, French and German governments must support the peace talks between Russia and Ukraine that are taking place on the Belarusian border and of which three rounds have already been completed, with little progress. Europe on one side and China on the other should encourage the two sides to “maintain the momentum of the negotiations, overcome difficulties and continue negotiations to achieve results and achieve peace,” the Chinese version of the meeting reported.

Xi has also urged Berlin and Paris to try to reduce the negative impacts of the crisis, and expressed concern about the effect of the sanctions that the West has imposed on Russia on the stability of supply and transport chains, on finance. global and in energy supplies. They will also “harm the global economy already damaged by the pandemic, and that is in no one’s interest.”

For their part, according to the statement, Scholz and Macron have stated that Europe “faces the greatest crisis since World War II” and their countries support that the conflict be resolved through dialogue. The two European leaders declared themselves ready to strengthen communication and coordination with China to encourage peace and promote talks, in order to “avoid a further escalation of the situation and a more serious humanitarian crisis.”

China and Russia are strategic partners, a relationship that they have been strengthening over the last decade and that they consider “without limits”, as Xi and Russian President Vladimir Putin signed at their meeting on February 4 on the occasion of the opening of the Winter Olympics. Since the beginning of the invasion of Ukraine on February 24, Beijing has adopted a position of impartial neutrality, in which it has made clear its support for its northern neighbor. China has not condemned the invasion and has described the international sanctions as “illegal”. Although he assures that he respects the sovereignty and territorial integrity of all countries, he considers the United States and NATO responsible for the current situation for not having responded to Putin’s “legitimate security concerns”.

Xi, who in the joint communique he signed with Putin on February 4 endorsed China’s formal opposition to future NATO expansions, indicated that “we need to actively uphold a vision of common, comprehensive, cooperative and sustainable security. China supports France and Germany in promoting a balanced, effective and sustainable European security framework for Europe’s interests and lasting security, and maintains its strategic autonomy.” Beijing, the statement adds, “will welcome a dialogue of equals between the European Union, Russia, the United States and the Atlantic Alliance.”

Chinese Foreign Minister Wang Yi had pointed out on Monday at his main press conference of the year his country’s willingness to play a role as a mediator if necessary in the conflict. But he also stressed that Beijing remains unconditionally behind Moscow, stressing that the relationship between the two governments is “rock solid” and will continue to be so “however grim the situation may be.”

Elon Musk and Bolsonaro, the neocolonizer and the neofascist | Opinion
June 1, 2022

Elon Musk and Bolsonaro, the neocolonizer and the neofascist | Opinion

The EU redoubles its support to Ukraine with a military training mission | International
August 30, 2022

The dead in the Netherlands rise to six in the accident of a truck with Spanish license plates that ran over a picnic area | International
August 28, 2022

Kirchner accuses the Argentine Supreme Court of having “written and signed” his sentence for alleged corruption
July 19, 2022

A terrorist attack on a hotel in Mogadishu leaves at least 10 dead | International
August 20, 2022