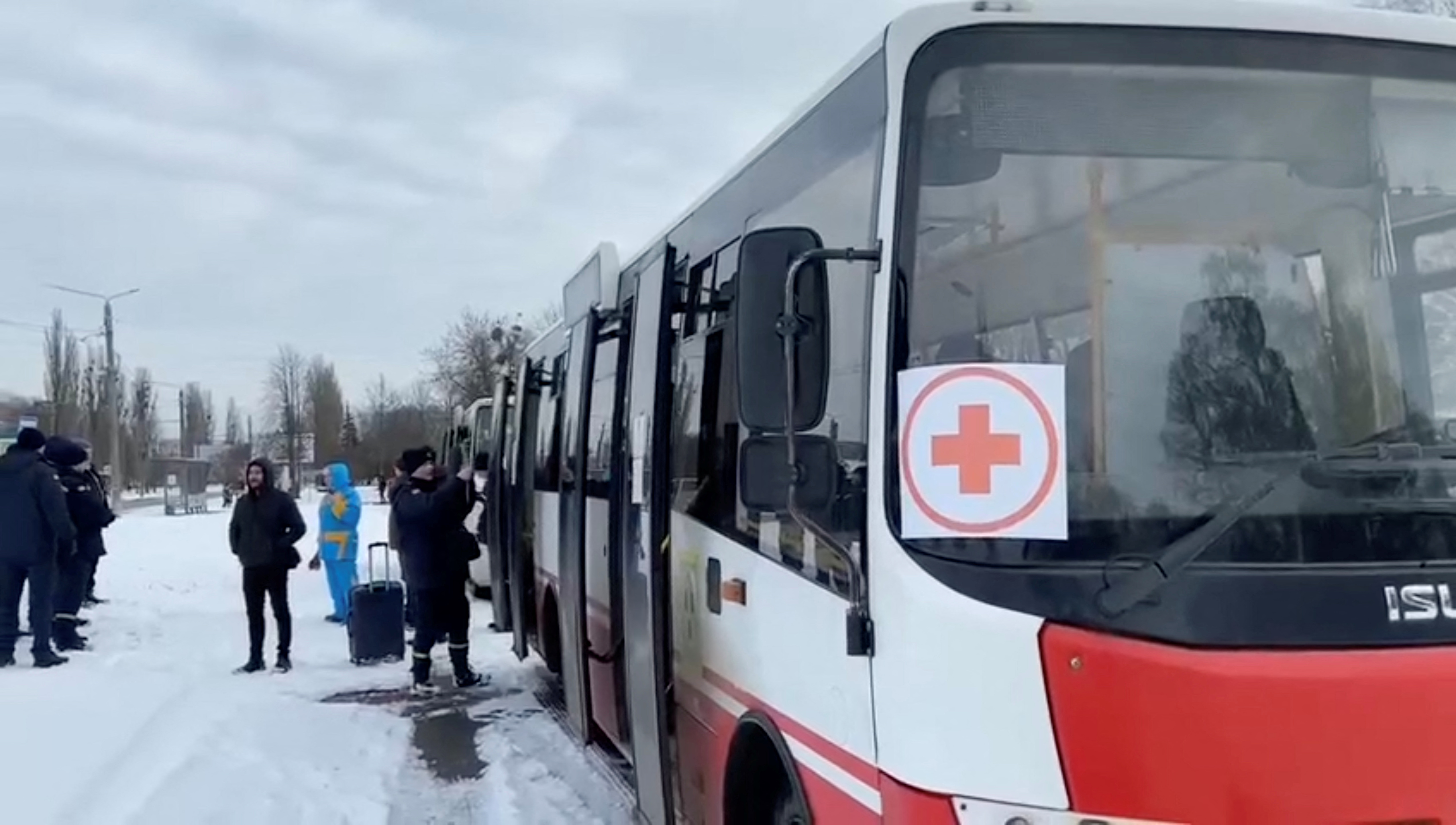 In Ukraine, after three days of unfulfilled ceasefire commitments, the roar of weapons has ceased this Tuesday for the launch of humanitarian corridors, previously agreed by Kiev and Moscow, that allow a safe exit for the inhabitants of the besieged cities of Sumi (northeast) and Irpin (25 kilometers from Kiev). A first group of 150 people managed to escape from these two cities at nine in the morning on Tuesday, as confirmed by Oleksi Kuleba, governor of the Kiev region, who specified that the evacuation of civilians will continue until the fall of the evening. Shortly after, the Ukrainian Foreign Ministry posted a message on Twitter with images of the bus exodus of this first group of Sumi residents. The situation of civilians is more pressing in Mariupol, in the southeast of the country, on the shores of the Sea of ​​Azov, where the evacuation operation has failed: the Ukrainian government has denounced that Russian troops have bombed a convoy of eight trucks loaded with humanitarian aid and 30 buses that were heading to that city under siege for days to pick up civilians, which is the third failure of the ceasefire in three days.

In Sumi and Irpin, the only cities where the Ukrainian authorities have already confirmed the opening of the safe corridors, the evacuation continues slowly and is planned to do so until 9:00 p.m. (local time). If the fleeting agreed ceasefire is respected, the truce for the evacuation of civilians will have lasted 11 hours. “Disabled people, pregnant women and children from orphanages will be given priority,” Sumi Governor Dmitro Yivitskii said in a video statement. The country’s deputy prime minister, Iryna Vereshchuksaid, has pointed out that other citizens of that town accompany the buses of the evacuation caravan in their private cars.

In Irpin, the neighboring municipality of Kiev where a Russian bombardment killed a family of four – parents and two children – on Sunday, the cessation of fighting has allowed, once again, the residents of this punished town to go out again this Tuesday to the streets to try to escape from the bombings. “The city is practically in ruins and in my neighborhood there are hardly any houses left that have not been bombed,” a mother holding her baby in her arms wrapped in a blanket, with another daughter at her side, told Reuters. “Yesterday [por el lunes] it was the heaviest shelling and the lights and noise were terrifying. The whole building was shaking”, recalled this woman, who has embarked on the path of flight that two million refugees have already completed towards neighboring countries, according to data from the United Nations High Commissioner for Refugees (UNHCR).

The tweet from the Ukrainian Foreign Ministry on these first groups of evacuees specifies that the destination of the people who have taken the Sumi humanitarian corridor is Poltava, another Ukrainian city 175 kilometers to the south. On Monday, Ukraine had accused Russia of frustrating the departure of citizens from that same city, as well as from Kiev, Mariupol, Kharkiv, Volnovakha and Mijolaiv, some of the cities most affected by the fire and the Russian siege. In turn, the Ukrainian government rejected, calling it “immoral”, the Russian claim that a large part of these humanitarian corridors were destined for Russia or its ally Belarus.

An obligation of International Humanitarian Law

Humanitarian corridors are used to allow civilians a safe route to escape from war. According to International Humanitarian Law, this is not a concession by the contenders, but rather a legal obligation, established in the 4th Geneva Convention of 1949 and its additional protocols of 1977, which oblige the parties to protect civilians in wartime, facilitate their safe withdrawal and allow the free passage of food, medical supplies and other essential goods. In principle, humanitarian corridors or “safe corridors” consist of a temporary cessation of fighting to allow the civilian population to flee along previously agreed routes. The term was first evoked in the 1990s, during the war in Bosnia, in the former Yugoslavia, when the United Nations established what it defined as “safe areas” for civilians to leave combat zones and, above all, of the cities that, as is happening now in the Ukraine, are under siege. The United Nations General Assembly explicitly mentioned these corridors for the first time in 1990, in its resolution 45/100.

That first attempt by the United Nations in Bosnia soon proved to be a failure. The UN had no means to provide security to civilians and the contenders in that war did not respect their commitments. That failure was the first in a series of them. In one case, that of Syria, in whose war Moscow was involved in support of the Bashar al-Assad regime in 2015, Russia broke its promises to silence the weapons so that civilians could flee in cities such as Homs, Hama and Aleppo, according to Syrian civilians then denounced, an accusation supported by international organizations. Organizations such as the International Committee of the Red Cross and Red Crescent (ICRC), which now mediates between Russia and Ukraine to allow civilians to leave, are in charge of monitoring compliance with the commitment to respect the lives of the population. civil.

That same organization, the ICRC, was the one that denounced on Monday that the supposed “humanitarian corridor” prepared by Russia for the civilians of Mariupol, a city where half a million people live, was riddled with mines. The organization’s director of operations, Dominik Stillhart, said so in statements to the BBC.

After three consecutive failures in three days, this town is one of the points where the evacuation of civilians is most necessary, who have been enduring critical conditions for days: without water or electricity and under bombardment. In this city, a child died of thirst on Monday, the Ukrainian Foreign Minister, Dmitro Kuleba, has denounced, who has assured that 300,000 people “are hostages” of the Russian troops in Mariupol, where witnesses have described scenes of thirsty people drinking water of the puddles. The Russian Defense Ministry assured the Interfax agency on Tuesday that both the Mariupol humanitarian corridor, as well as those in Kiev, Chernigov (north) and Kharkov (east) are already open.

For the ICRC and other international organisations, such as Doctors Without Borders (MSF), humanitarian corridors are a lesser evil and sometimes even a trap. International Humanitarian Law requires the protection of civilians, wherever they are, and the safe corridors place the population before the ultimatum of fleeing when and where they are told or die in attacks that often intensify after the closure of these corridors .

In a statement released on Sunday, MSF recalled that “after its decades of experience working in wars, we know that occasional humanitarian corridors help but are not enough,” said Stephen Cornish, director general of the organization. “Several times we have witnessed civilians being encouraged to leave through time-limited civilian evacuation corridors, only to be met with extraordinary and indiscriminate violence unleashed against all who were unable or unwilling to flee. and all that was left behind.

In Ukraine there are a large number of people who find it difficult or impossible to flee, for example, the elderly. One in four Ukrainians is over 60 years old, according to the humanitarian organization HelpAge, citing official Ukrainian sources. Many of these people have mobility problems, as well as a greater resistance to leaving their lives behind. In its statement on Sunday, Doctors Without Borders recalled that civilians “should not lose their status” as such even if they prefer to stay or are unable to escape. The organization claims that the humanitarian corridors do not have deadlines; that civilians can flee safely at any time. This and other organizations have also reiterated that safe corridors should not serve to whitewash the image of those who commit war crimes.

Finland: Sanna Marin calls for more sanctions against Russia: “Ukraine will win the war with our support. There is no other option” | International

Profile of the Chilean voter: who is behind the rejection and approval of the new Constitution

By admin
Recent Posts
Latest News
Facebook Twitter WhatsApp Telegram
Back to top button
Close
Featured Posts
Cuba, after being excluded from the Summit of the Americas: “Could it be that Spain is in America?” | International
June 6, 2022

Cuba, after being excluded from the Summit of the Americas: “Could it be that Spain is in America?” | International

Davos Forum 2022: Brussels wants to link Ukraine’s reconstruction money to the adoption of reforms | International
May 27, 2022

Bolsonarismo annihilates the traditional center of the PSDB in Brazil | International
October 28, 2022

Bolsonarismo annihilates the traditional center of the PSDB in Brazil | International

Hwasong-17: The US and South Korea doubt the intercontinental missile launched by North Korea | International
March 27, 2022

Hwasong-17: The US and South Korea doubt the intercontinental missile launched by North Korea | International