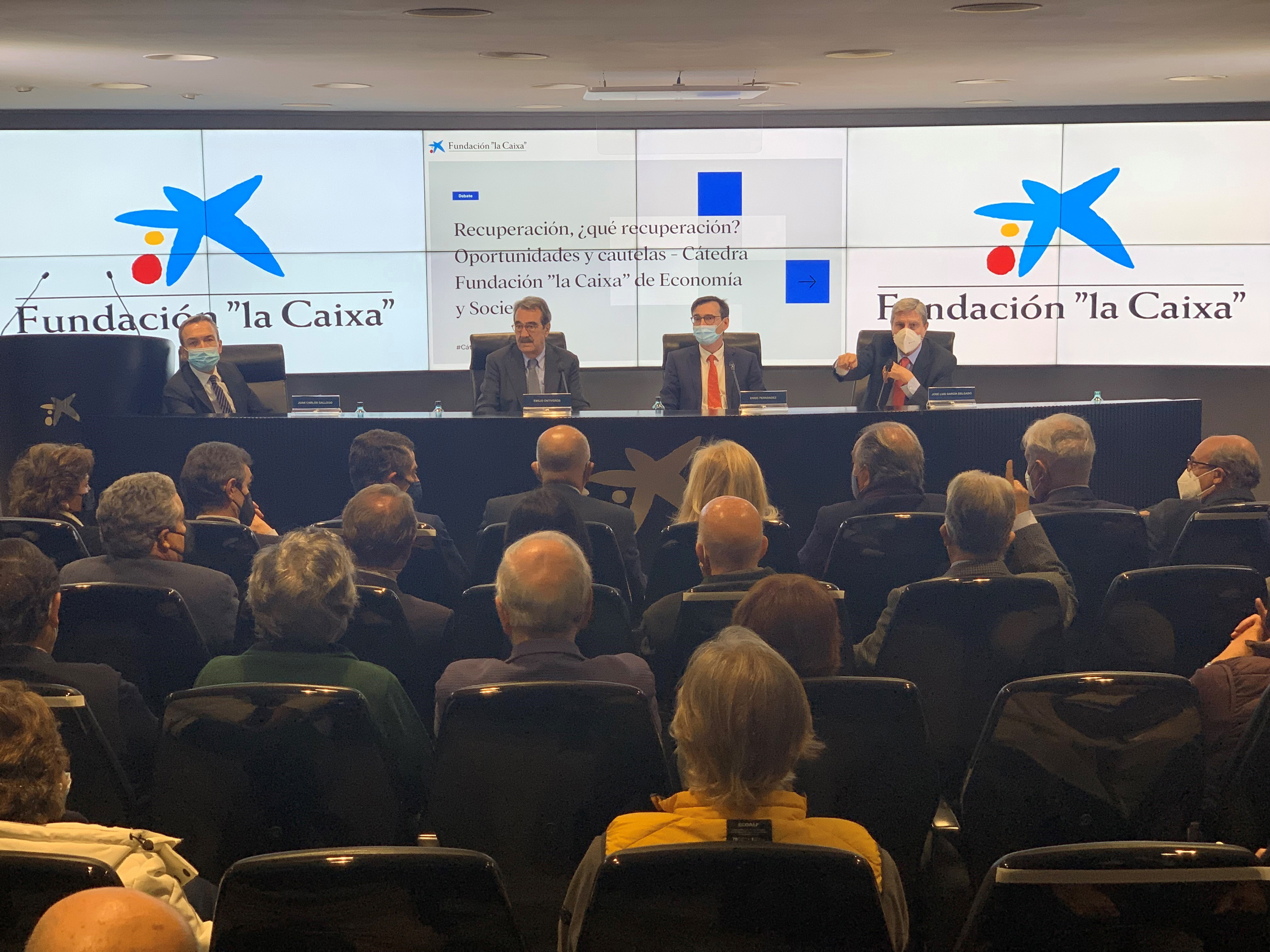 It is difficult to ignore the crisis generated by the conflict in Ukraine and the impact it has on the recovery of economies that, like Spain’s, were established and with a positive tone and outlook before the Russian invasion. Along these lines, the debate among economists inevitably led emilio ontiveros and Enrique Fernandez titled Recovery, what recovery? Opportunities and precautions, with which the La Caixa Foundation Chair restarted its face-to-face meetings this week after the pandemic and that its director, also an economist Jose Luis Garcia Delgado, had been scheduled for well before the Russian tanks entered Ukrainian territory. And that, as the professor pointed out, has caused a new crisis to occur in an already long chain that began in 2008 with the Great Recession and continued with the refugees, Brexit and the pandemic. Five crises, or a continuing crisis, in less than 15 years to which the EU has responded unevenly: from a striking lack of coordination that was about to blow up the euro to the current cohesion that has already been seen in the fight against the pandemic with Next Generation funds.

The situation has caused a new uncertainty in the OECD economies, which grew significantly, as well as employment. Favorable monetary conditions had led to increases in business investment, in the case of the European Union driven by the aforementioned funds and public-private collaboration. The investments and reforms associated with these funds must offer key support to the energy transition and the digital transition and serve not only to grow more in the short term, but to grow more and better in the long term.

In Spain, the concern is the impact that the deployment of these funds may have, the improvement of industry and construction and the recovery of international tourism, as well as the dynamism of the foreign sector. It is true, in any case, that exports of goods from Spain to Russia represented less than 0.2% of GDP in 2021, while Russian tourism had fallen before the pandemic. For its part, the relevance of trade with Ukraine only stands out as a supplier of corn, sunflower and wheat. The problem lies in whether the conflict crosses borders and continues over time, as well as Russia’s response to the sanctions.

Now, the main thing is that the EU continues to show signs of this cohesion to respond to the effects it has on vital issues, such as energy prices and strong inflationary pressures, in both cases run amok for months by the pre-war situation that had originated in the area, above all due to the control of natural gas. There is unanimity in the conviction that the main impact will be on energy prices due to Europe’s dependence on Russian gas, and it seems that the shock plan agreed by the Union’s energy ministers is on the way to detach itself as much as possible her. It is a pity, in this sense, that the connections between the Iberian Peninsula and France, which has always hindered its development, do not currently allow for a greater supply of Algerian or regasified gas in the eight existing regasification plants in Spain and Portugal.

Uncertainty, in short, once again takes hold of economic decisions and, as Ontiveros says, it is not difficult to intuit some consequences: prominence of fiscal policies; changes in the composition and amount of public spending and military spending; possible extension for another year of the suspension of the Stability Pact agreed in 2020; reduction of external dependence on supplies; erosion of the US predicament and China’s leading role on the global scene.

It also conditions, as the speakers in the debate pointed out, the reaction of the central banks. The rise in interest rates in financial markets that were highly volatile before the invasion was taken for granted. Now, as long as uncertainty remains, it is to be hoped that the ECB will not tighten monetary policy despite the fact that inflation may pick up even more in the short term. In this sense, it is foreseeable that it will postpone any decision to raise rates and that it will flexibly implement its asset purchase program with the aim of avoiding a tightening of country risk premiums. . “When the uncertainty is reduced, however, the ECB should return to its plans to start normalizing monetary policy, even more so in a situation in which inflation will have skyrocketed above what was expected a few weeks ago”, he pointed out. the chief economist of La Caixa, Enrique Fernandez.

It was accepted in the parliament! Fakıbaba’s parliamentary seat dropped

Germany worries about the new wave of inflation | Economy

Rafael Grossi: “Putin is extremely focused and knows in detail what happens at the nuclear power plant” in Zaporizhia

The legislative elections in the US will measure the support for union mobilization in two States | International
October 28, 2022

Poland makes its Soviet aircraft available to the US for the defense of Ukraine | International
March 9, 2022

Nancy Pelosi, in Taiwan: “We will not abandon you” | International
August 3, 2022

Why hundreds of thousands of people at the closing of the approval campaign in Chile are not a guarantee of victory
September 3, 2022

Saravena, the city where they don’t steal; they only kill
June 6, 2022

Saravena, the city where they don’t steal; they only kill

New photos of the party in Downing Street aggravate the confrontation between Boris Johnson and Parliament | International
May 24, 2022