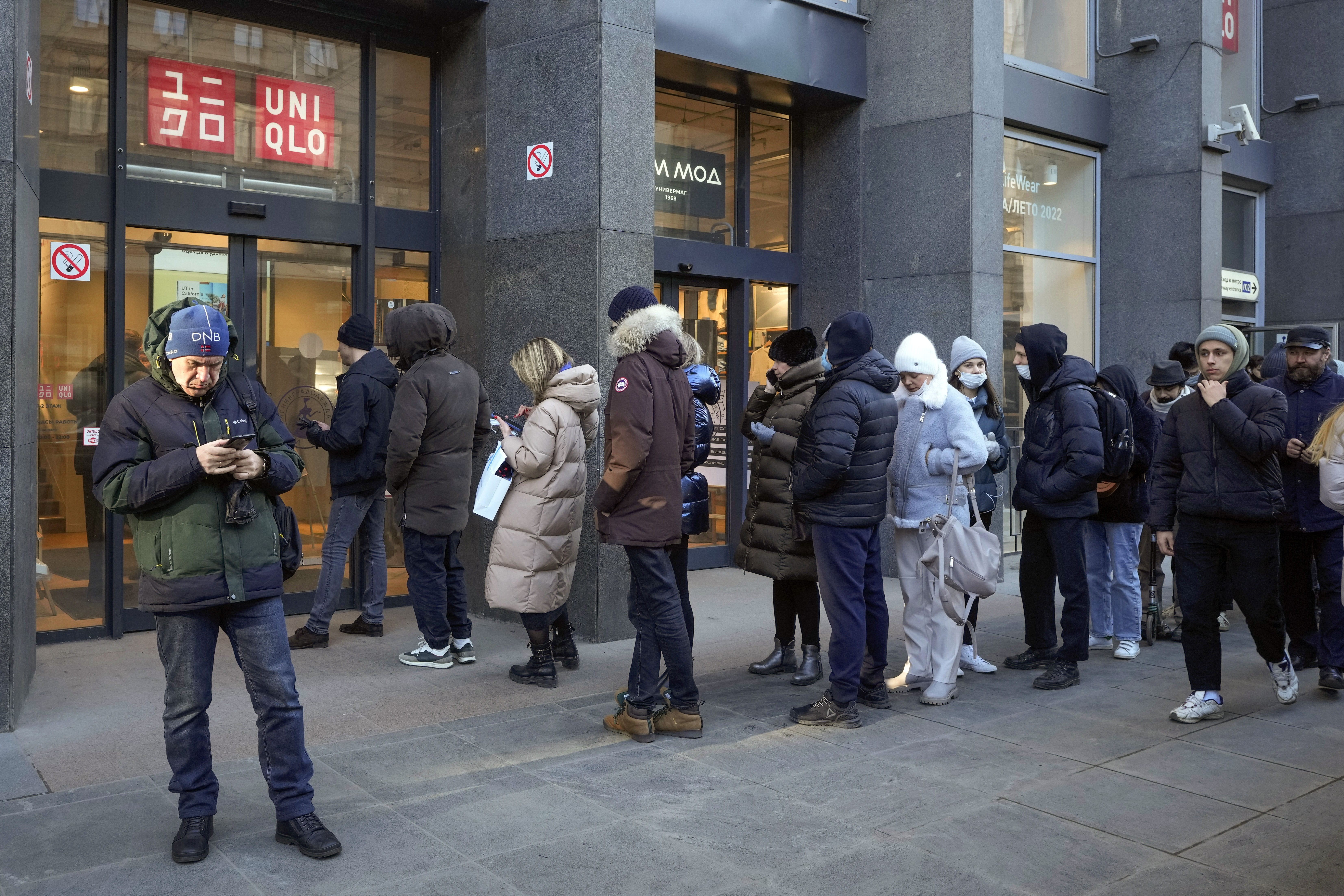 President Vladimir Putin on Thursday threatened international companies that have suspended their activities in Russia after the invasion of Ukraine to freeze their assets. The Ministry of Economy is preparing a series of measures to persuade companies to resume operations or even face possible nationalization. Goldman Sachs announced shortly before that it is leaving the country, the first major Wall Street bank to make this decision. The Japanese Uniqlo has also joined the exodus, although it had recently defended the continuity of its activity in the country, citing logistical problems.

“Regarding companies that plan to close their production plants, we must act firmly,” Putin said in a videoconference meeting with government members. “In no way can we tolerate harm being caused to Russian suppliers,” he added. “If necessary, we will bring in external managers and transfer those companies to those who really want to work.” The Russian president considers that there are “sufficient legal and market instruments for this”, and that it is not necessary to resort to “arbitrary actions”.

The Ministry of Economy has released a statement indicating that it will prepare new measures to be able to take temporary control of companies that leave Russia in which foreign capital is greater than 25%, according to the Bloomberg agency. Thus, a court can respond to requests from members of the company’s board of directors or other interested parties to request that external managers be sent to carry out day-to-day activities. Afterward, the shares of foreign-owned companies can be frozen as part of the Kremlin’s efforts to maintain ownership and employment. The owners will have five days to resume activity or evaluate other options such as selling their stake.

Not many more details are known about the Russian initiative, nor how it will affect companies that have 100% foreign capital. This is the first explicit response to the exodus of Western firms after the invasion of Ukraine, both for reasons of corporate reputation and the logistical difficulties arising from the conflict and the sanctions imposed by the EU, the US and the UK.

The list of Western companies that have suspended their operations, in one way or another, in Russia is getting longer and longer: Coca-Cola, PepsiCo, McDonald’s, Unilever, Volkswagen, Inditex, Mango, Ikea, among many others. The companies that resist are above all international hotel chains and food companies such as Nestlé or Danone. “We have a responsibility to the people we feed, the farmers who provide us with milk, and the tens of thousands of people who depend on us,” Danone CEO Antoine de Saint-AffriqueSaint-Affrique told reporters. Financial Times.

Putin has admitted that the sanctions have had an impact on the Russian economy, but has assured that the economy will adapt over time. He has also said that the sanctions would have been imposed regardless of the war in Ukraine. Russia, he has said, will continue to meet its contractual obligations regarding energy supplies, referring to remarks made this week by Deputy Prime Minister Alexander Novak warning that Moscow had the option of cutting off gas sales to Europe.

But the truth is that the Kremlin needs that money (700 million euros a day) especially now that it is facing the impact of the sanctions, and that the United States and the United Kingdom have also announced the blocking of the purchase of Russian oil. Russia is at imminent risk of foreign debt suspension as sanctions have cut off access to its dollar reserves and other currencies such as the euro to pay creditors, a move that would have devastating effects on its economy. Fitch Ratings downgraded Russia’s credit rating to junk bond level on Wednesday, following similar decisions recently made by Moody’s and S&P Global, the other major credit rating firms. rating.

Bernanke warns of the risks of shadow banking, the strong dollar and the war for financial stability | Economy

Check Also
Close
Pedro Castillo: a year and a half adrift in Peru | International
55 mins ago

Putin is not explained by his reasons. His bad ideas explain it | Kiko Llaneras newsletter

Hurricane ‘Julia’ leaves a trail of destruction in Nicaragua | International

Michelle Bachelet leaves the UN and returns to Chile at a key moment in the constituent process
June 14, 2022

Brussels warns of the serious shortcomings of the European armies in the face of Russia’s capacity for aggression | International
May 13, 2022

Spain and the United Kingdom warn NATO of the risk of neglecting the Russian advance in Africa | International
May 25, 2022

Miners trapped in Coahuila: A week trapped in the mine without knowing if they are alive or dead
August 10, 2022

Miners trapped in Coahuila: A week trapped in the mine without knowing if they are alive or dead

Robert Crimo: Highland Park Killer Had Threatened to Kill His Family and Planned Another Attack During His Escape | International
July 6, 2022

Robert Crimo: Highland Park Killer Had Threatened to Kill His Family and Planned Another Attack During His Escape | International

Vacancy: Political crisis in Peru, live | The president of the Constitutional Court: “There has been a coup d’état in the purest style of the 20th century” | International
5 hours ago

Vacancy: Political crisis in Peru, live | The president of the Constitutional Court: “There has been a coup d’état in the purest style of the 20th century” | International