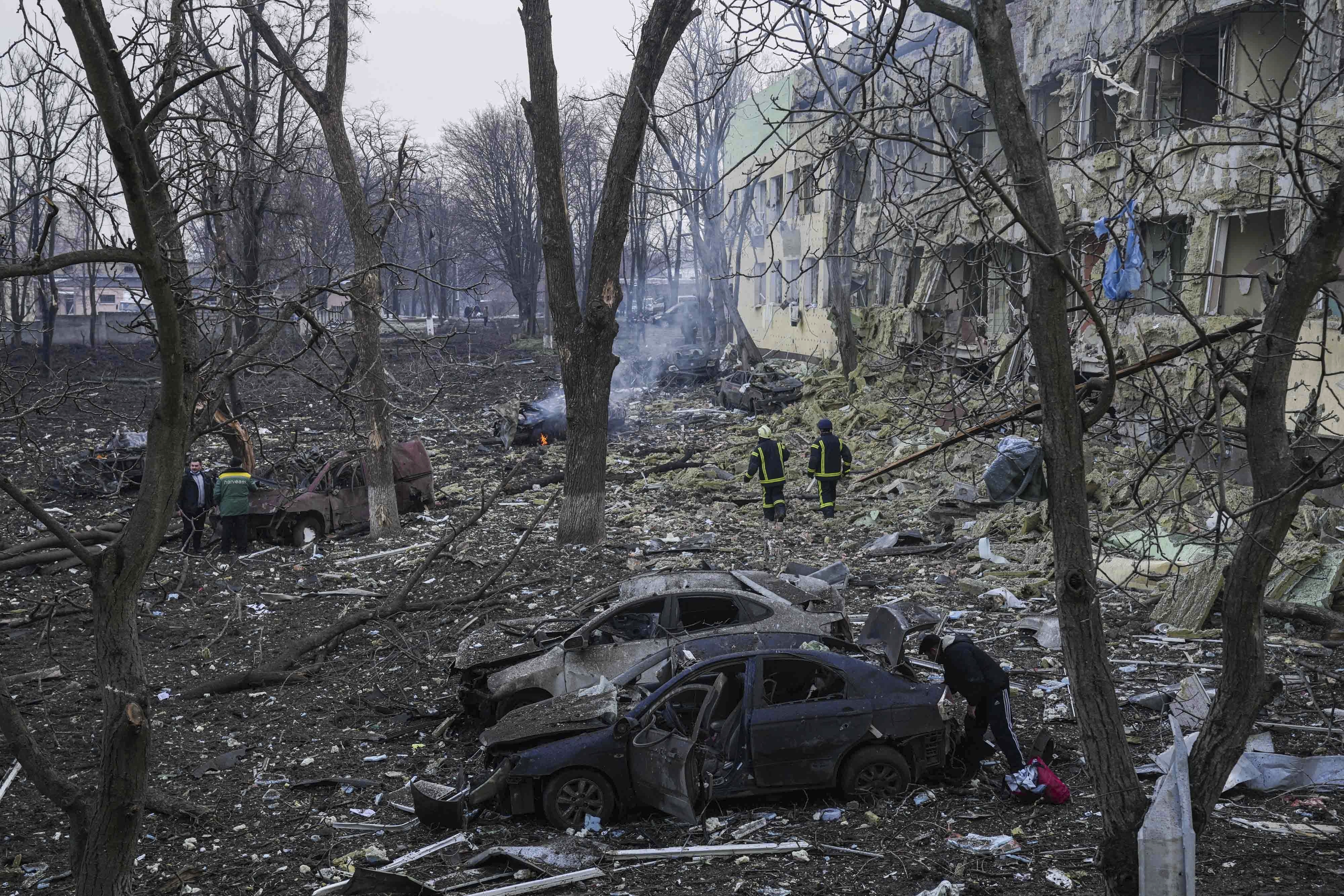 The Russian Foreign Minister, Sergey Lavrov, and the Ukrainian, Dmitro Kuleba, meet for the first time this Thursday in Turkey to try to find a solution to the conflict unleashed by the Russian invasion of Ukraine. The three rounds of negotiations that have taken place so far in Belarus have resulted in few results, including the establishment of several humanitarian corridors that were launched on Tuesday amid complaints of bombings and breaches of the ceasefire. The meeting between the foreign leaders, the highest level so far, takes place 24 hours after the Russian attack on a maternal and child hospital in Mariupol, a Ukrainian town on the shores of the Black Sea that has been besieged for days. The Ukrainian authorities have reported this Thursday that three people, including a girl, died in the bombing, and the mayor reported the death of another 1,200 during the strong siege that the city has suffered for nine days, where they are already opening mass graves for the deceased and where a humanitarian catastrophe is unfolding.

Lavrov and Kuleba arrived in the Turkish city of Antalya —one of the favorite destinations for Russians and Ukrainians for their summer vacations, in the south of the country— on Wednesday night and have held with the head of Turkish diplomacy, Mevlüt Çavusoglu, two bilateral meetings before the meeting between the three, which started around 9:30 in the morning, Spanish peninsular time, and is expected to last at least an hour and a half.

Çavusoglu has expressed his hope that the meeting will be a “turning point” in the war situation and an “important step” towards peace. The Russian Foreign Ministry has said that progress has been made following the three meetings between the negotiating teams of both countries held in Belarus in recent weeks. And indeed, a Ukrainian government representative said on Wednesday that his country could accept Moscow’s demands for “neutrality,” but not for demilitarization. It would be, yes, if sufficient guarantees of respect for Ukraine’s sovereignty are given and Russian troops withdraw. Kiev is also not ready for territorial concessions in Crimea and Donbas, as the Kremlin claims. Thus, before arriving in Antalia, Kuleba explained that he was going to the meeting to negotiate “in good faith” but “without great expectations.”

The director general of the International Atomic Energy Organization (IAEA), Rafael Mariano Rossi, will also hold meetings this Thursday with the Russian and Ukrainian ministers in the Mediterranean town, after the international alarm generated by the Russian attacks on nuclear power plants in Ukraine. . “I hope to make progress on the urgent issue of ensuring the safety of Ukraine’s nuclear facilities,” he said.

The Ukrainian-Russian negotiations take place within the framework of the Antalya Diplomatic Forum, an annual event organized by the Turkish Foreign Ministry that regularly attracts leaders, diplomats and former ministers from around the world. In fact, Lavrov will also hold a meeting with the Vice President of Venezuela, Delcy Rodríguez, at a time when the United States is trying to woo the government of Nicolás Maduro to seek new supplies of hydrocarbons with which to replace the Russians. The arrival of the European Foreign Policy representative, Josep Borrell, is also expected in Antalya, although it will be in the next few days.

The initiative is the result of diplomatic efforts by Turkey, whose president, Recep Tayyip Erdogan, has spoken by phone with some twenty heads of state and government since the start of the war, including a conversation last Sunday with his Russian counterpart. , Vladimir Putin, and several with the president of Ukraine, Volodímir Zelenski. The Turkish Foreign Minister has in turn held 40 telematic meetings with his counterparts to prepare the ground, including six with Kuleba and four with Lavrov.

The talks come a few hours after the Russian attack on a maternity and children’s hospital in the besieged city of Mariupol (on the coast of the Sea of ​​Azov, to the southeast, 446,000 inhabitants). The attack occurred during the ceasefire agreed by Kiev and Moscow so that thousands of people trapped in the city, in a critical situation, could leave through humanitarian corridors. Ukrainian President Volodymyr Zelensky blamed Moscow on Wednesday for the “atrocity.” “There are children, people under the rubble”, he has stated on his social networks. “How long will the world be complicit in ignoring terror?” he added. “Europeans! They will not be able to say that they did not see what happened to the Ukrainians, to the residents of Mariupol,” Zelensky stressed.

As reported on Thursday by the Mariupol municipality on Telegram, at least three people have died in that attack, including a girl. The first balance numbered 17 people injured, mainly members of the hospital staff. The Kremlin has ensured that Russian forces do not fire on civilian targets. The mayor of the city in the southeast of the country, for his part, has assured that 1,200 people have died since the siege of this city began nine days ago.

In the port city the situation is “apocalyptic”, the Red Cross has denounced. There is no clean water supply, hardly any food left in looted shops or medicine, there is no heating or electricity and telecommunications networks are not working properly, and civilians remain huddled in shelters to shelter from relentless bombardment. According to the City Council, the corpses are piling up in the streets and the authorities are making mass graves to bury the deceased since it is impossible to bury them in any other way due to the continuous bombing.

Nearly 3,000 newborns will soon be left without medicine and food in Mariupol, according to the Ukrainian foreign minister. The little information that comes from within the city, surrounded by Russian forces, confirms that its inhabitants are already experiencing a humanitarian tragedy. Some 200,000 people are trying to flee the city, the International Committee of the Red Cross has reported.

Mariupol is one of the cities where one of the six humanitarian corridors agreed between Moscow and Kiev should operate to allow the evacuation of civilians, although for now people have not been allowed to leave that city. The rest of the routes have worked, although with a different degree of compliance. President Zelenski has assured that more than 35,000 people were evacuated this Wednesday through these corridors.

Only about 5,000 civilians have been able to escape from Sumi, in the northeast of the country, where a bomb killed 22 people, according to the Ukrainian authorities. From the town of Enerhodar, where the Zaporizhia nuclear power plant is located, occupied by Russian forces, who are holding their employees, a refugee convoy, made up mostly of women and children, has managed to leave the city, according to the Ukrainian authorities. .

The Bucha City Council, northwest of Kiev with 28,500 inhabitants, assured on its Facebook page that the Russian military was preventing the passage of 50 buses with civilians. In Izium (46,600 registered), in the Kharkov region, in eastern Ukraine, the departure of the inhabitants was delayed by Russian bombing, according to its governor, Oleh Synehoubov, in a message posted on Telegram.

An investment in the EU of 300,000 million as a lever for a better future | International

At least 19 dead when a plane crashes into Lake Victoria, in Tanzania | International

By admin
Recent Posts
Latest News
Facebook Twitter WhatsApp Telegram
Back to top button
Close
Featured Posts
Above and below: who counts and who disappears in the UK’s ‘Truss era’ | International
September 6, 2022

Above and below: who counts and who disappears in the UK’s ‘Truss era’ | International

Or thanks to Anne Rice, the writer who revealed two vampires in her mind and heart | Culture
March 8, 2022

The Dutch Government investigates suspicions that Chinese police are acting on its territory to persecute dissidents | International
October 27, 2022

The delivery of the new Constitution seals the beginning of a new era in Chile
July 4, 2022

A new US delegation travels to Taiwan amid escalating tensions with China | International
August 22, 2022