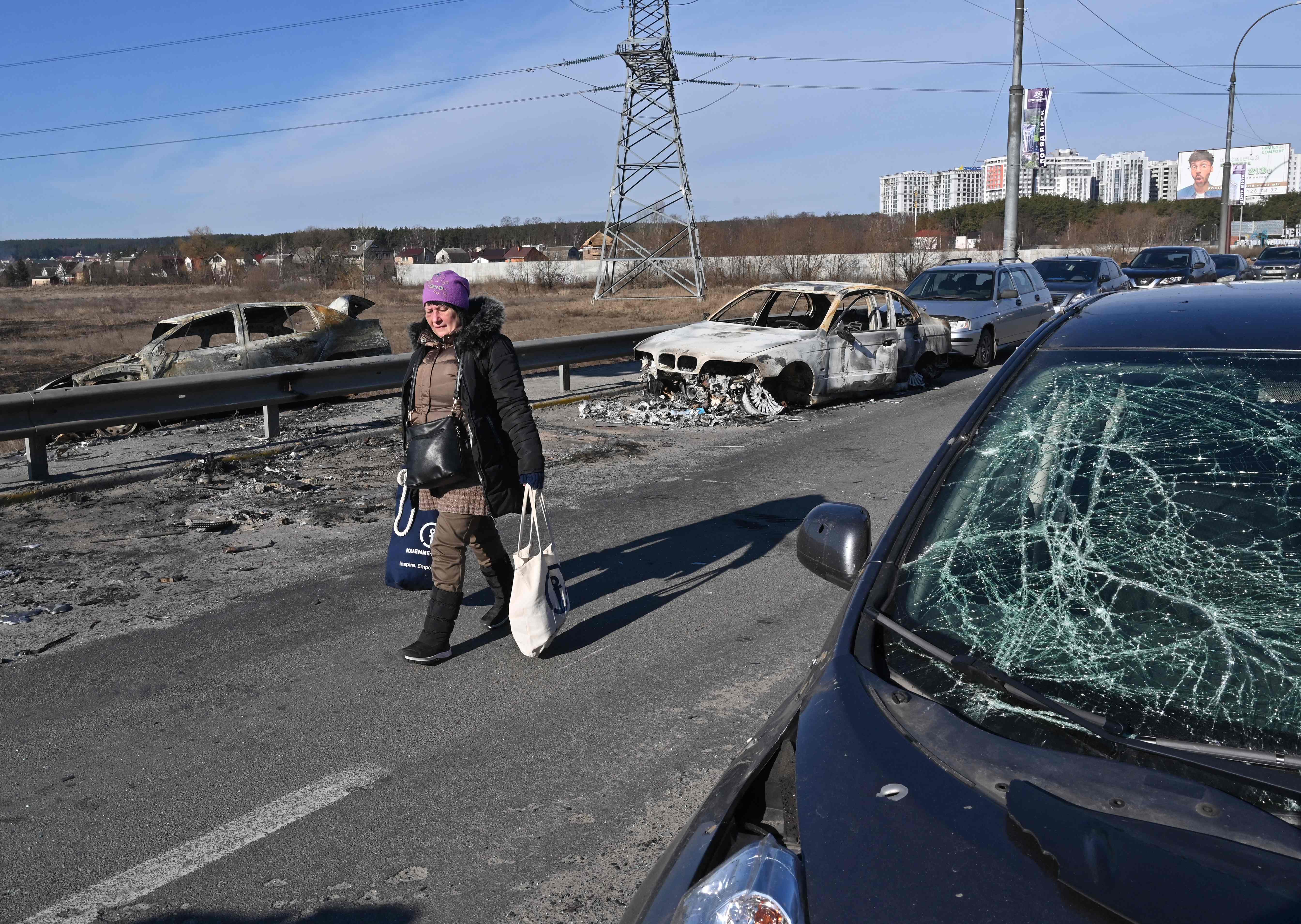 Russia has intensified this Saturday the attacks in Ukraine, with the focus on its strategic infrastructure and cities. At the time, tighten the fence around the capital, Kiev. When Vladimir Putin’s war has already exceeded two weeks, Russian troops have launched several attacks against airfields in different parts of the country and supply warehouses to try to hinder Ukrainian logistics and transport. The Russian Army has made some progress on the eastern flank and is trying to advance in the south, where it seeks to wrest control of the outlet to the sea from Ukraine.

The bombing of Mikolaiv, an important port city on the Black Sea, under attack for days, has caused damage to a cancer hospital and several residential buildings in the town on Saturday, which Russia is trying to occupy to launch and strengthen the assault on Odessa. , the pearl of the Black Sea. It is on this southern flank that the Kremlin has made the most significant advances.

A day after the Kremlin bombed several points in the west of the country, with attacks increasingly close to the borders of Romania and Poland, Moscow has raised its threat against allies that supply arms to Kiev. Any of these convoys will be “legitimate targets,” Deputy Foreign Minister Sergei Riabkov has said, accusing Washington of heating up the conflict. “The thoughtless transfer of weapons such as man-portable anti-aircraft and anti-tank missile systems” to Ukraine could have serious consequences, Riabkov stressed in an interview with a Russian state channel.

The number of civilian casualties is increasing in Ukraine, where several cities, such as the port city of Mariupol, on the Sea of ​​Azov, are in a critical situation due to the Russian siege; The exodus of those fleeing the war is also growing, which according to the UN is now close to 2.6 million. The Ukrainian president, Volodymyr Zelensky, has accused the Kremlin of terrorizing the citizens to break their will and launch “a war of annihilation”.

The Ukrainian leader has assured this Saturday that his Army has inflicted “significant losses” on the Russian forces. In a new video message, Zelensky demanded that Moscow respect the ceasefire agreed to allow evacuations from the besieged Mariupol, and also the release of the mayor of the southern town of Melitopol, Ivan Fedorov, who was allegedly kidnapped by Russian forces who were They took control of the city. The Ukrainian president assured that he was speaking with the French president, Emmanuel Macron, and the German chancellor, Olaf Scholz, about the kidnapping. “I will talk to all the people necessary to free our people. We expect world leaders to show us how they can influence the situation,” he said.

Macron and Scholz are expected to speak again this Saturday with Putin, who also spoke on Friday with the president of Finland, Sauli Niinistö, who asked him for a ceasefire for Ukraine. The path of dialogue, however, has failed and the Kremlin – which calls the invasion a “special military operation” and has prohibited the use of the word “war” in Russia to refer to the offensive against Ukraine – maintains that everything is going according to its plan to “denazify” and “demilitarize” the country of 44 million inhabitants. In his words, Putin launched the offensive to “protect” the Russian-speaking population and the citizens of Donbas, who claimed that they were suffering from “genocide”.

Despite the Kremlin’s rhetoric, the truth is that in the occupied zones the occupiers have not been received with the red carpet of the supposed liberators. This Saturday, despite the fear of Russian forces, dozens of people took to the streets in occupied Melitopol to protest against the mayor’s kidnapping, according to several videos. The city – very close to Crimea, which Russia illegally annexed in 2014 and which the Kremlin has used as a launch pad in its invasion and offensive to the south – was among the first to fall. The protests and anger against the Russian occupiers have been repeated in other cities now controlled by Russia, such as the coastal Kherson or Berdyansk, where Moscow, in addition to offering Russian passports to the population, has already made several arrests and reprisals are beginning, according to various sources.

In Mikolaiv, the Ukrainian troops have resisted the offensive for almost two weeks. This Saturday, the Kremlin forces have hardened the offensive with attacks on residential areas in the north of the city, with 475,000 inhabitants, according to local authorities. The strategic location is the missing piece for Putin to advance along the Ukrainian Black Sea coast and launch an offensive against Odessa, with a population of one million and the country’s most important port. In this city the air raid warning sirens sounded again on Saturday morning.

After the international condemnation for the bombing of a maternal and child hospital in Mariupol, the Ukrainian authorities have tried again this Saturday to send a convoy of medicines and essential goods. The city – key to Russia’s aspirations to control the coasts and to draw a land bridge from the Crimean peninsula and the area of ​​Donbas that it controls through pro-Russian separatists – has been without basic supplies for ten days, according to the few health organizations on the land.

“We have seen people who have died due to lack of medication and there are many such cases within Mariupol,” explains Olexander, a Doctors Without Borders worker, in an audio that EL PAÍS has heard. “There are many dead and injured people, lying on the ground. The neighbors dig the hole in the ground and put their bodies inside,” says the health worker, who explains that there has been no drinking water or medicine for almost 10 days in the city. The population lacks adequate food. They have to use wood to prepare the fire and to cook what little food they have. Also, there is no hygiene available, so we only have a little water to wash our hands,” says Olexander.

At least 1,582 civilians have died in Mariupol from the siege, according to the city council, a figure that cannot be verified by the siege to which the port town is subjected.

The Ukrainian deputy prime minister, Irina Vereshchuk, stated this Saturday that some humanitarian corridors to evacuate civilians are already operating, and that there are plans to expedite the departure of the population that wants it from towns and surroundings of Kiev and Sumi and other areas close to the hottest fights. “I hope that the day goes well, that all the planned routes are open and that Russia fulfills its obligations to guarantee the ceasefire regime”, she said Vereshchuk.

When and what day will the police promotion go to bed? How much is the 2022 EGM police salary promotion, how much is it?

David Trimble, one of the architects of peace in Northern Ireland, dies | International
July 25, 2022

David Trimble, one of the architects of peace in Northern Ireland, dies | International

Ukraine claims to have destroyed a troop landing ship in a port in the Sea of ​​Azov | International
March 24, 2022

What does it mean for Biden to keep control of the Senate? | International
2 weeks ago

What does it mean for Biden to keep control of the Senate? | International

Alberto Fernández confirms by phone to Biden that he will attend the Summit of the Americas
June 2, 2022

Peru temporarily suspends the release of Alberto Fujimori at the request of the Inter-American Court | International
March 31, 2022

Accident at the Lima airport: two dead when a Latam plane hit a fire truck | International
1 week ago

Accident at the Lima airport: two dead when a Latam plane hit a fire truck | International

Xi Jinping strengthens his power in a Congress in which former President Hu Jintao is forced to leave the room before the votes | International
October 22, 2022