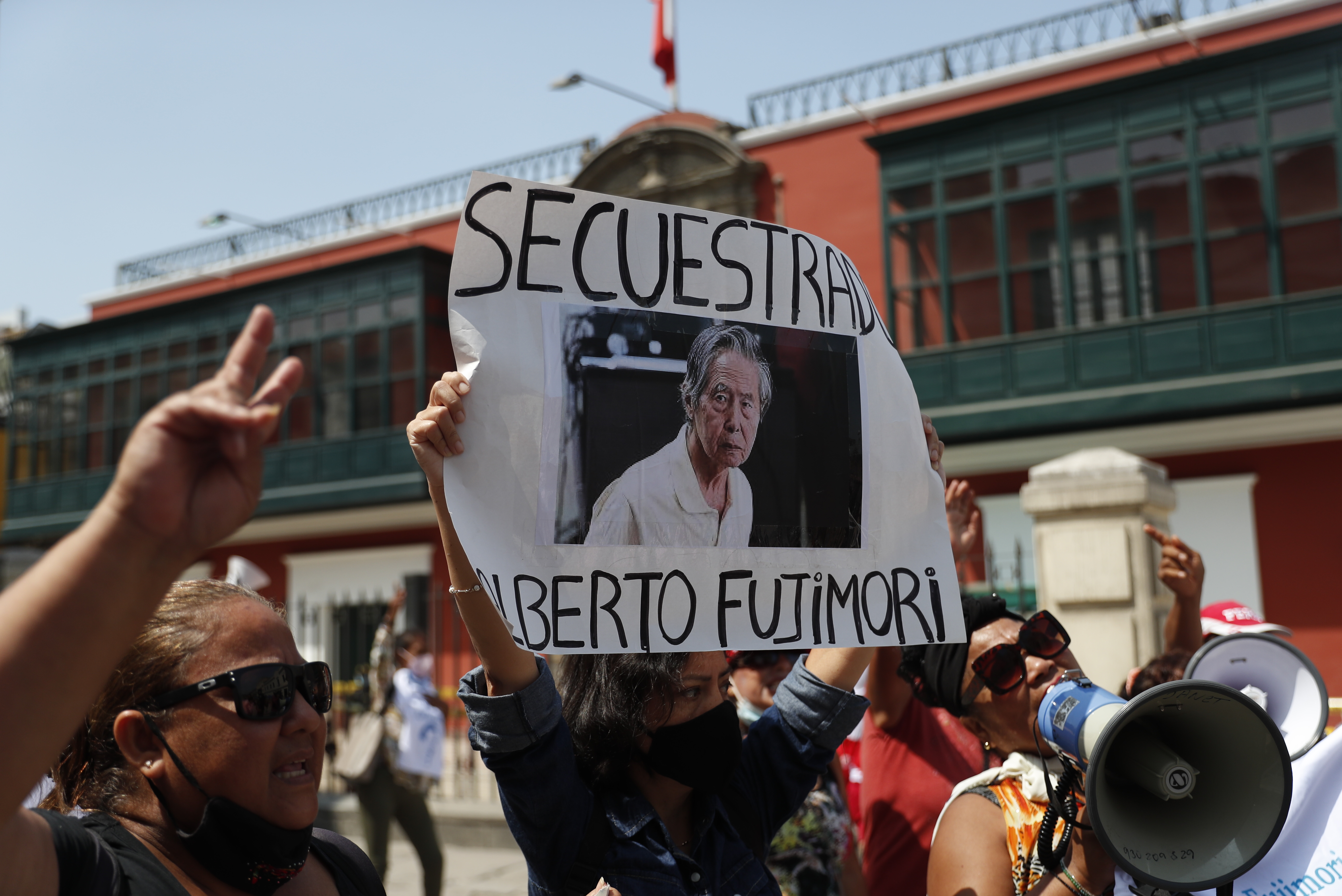 Three magistrates of the Constitutional Court of Peru, with the casting vote of the president of the collegiate, have accepted this Thursday a habeas corpus in favor of the release of former President Alberto Fujimori (1990-2000), sentenced to 25 years in prison for crimes against humanity committed by the Colina military detachment during his Government.

The appeal was filed by the lawyer Gregorio Parco, who questioned the prison because the former president “is an 82-year-old person, in poor health, he is no longer a danger to society.”

The vote was tied three to three, but Judge Augusto Ferrero asserted his casting vote. Human rights organizations yesterday asked the court to refrain from voting in this case because in 2017 he met with Keiko Fujimori – the eldest daughter of the autocrat – and with Fujimorist congressmen who supported Ferrero’s candidacy to the Constitutional Court.

On Wednesday afternoon, the Constitutional Court included in the agenda for the following day the vote of the habeas corpus in favor of Fujimori’s release, even though it was not scheduled. The correlation of forces in that body, in which the convicted person had the decisive vote of the president of the court, mobilized the non-governmental organizations that for almost three decades have defended the victims of the massacres of La Cantuta and Barrios Altos, committed by the Colina group. The NGOs asked the Inter-American Court of Human Rights for measures to guarantee their access to justice, including a resolution annulling Fujimori’s release.

The Colina group -created by the Fujimori regime in the early 1990s- carried out dozens of murders of civilians, some of them opponents of the government, under the alibi of the fight against terrorism. In November 1991, he murdered 15 people, including an eight-year-old boy, in a vacant lot in Barrios Altos (downtown Lima). In July 1992, nine students and a professor from the La Cantuta National University of Education were kidnapped and extrajudicially executed. The following year, some of the bodies were found charred in an eastern district of the capital.

In 2009, the Special Criminal Chamber sentenced Fujimori to 25 years in prison as the direct perpetrator of the crimes of aggravated homicide and serious injuries – in both cases – after being extradited from Chile. The sentence occurred after a long process in the inter-American justice system to which the victims and survivors resorted due to the impossibility of finding her in the Peruvian jurisdiction. The Inter-American Court of Human Rights found the Peruvian State responsible in both cases, and as part of the reparations ordered the investigation and punishment of the crimes, among other measures.

On Christmas Eve 2017, then-president Pedro Pablo Kuczynski granted a pardon to the former president, after negotiating votes with one of his sons, Kenji Fujimori, who was a congressman at the time, and some Fujimori parliamentarians opposed to Keiko Fujimori’s position, who hoped a law for his father to be released, instead of a pardon. Kuczynski offered a presidential pardon in exchange for votes not to be removed from office, in the midst of a Fujimorista loadout.

Weeks later, the Ombudsman’s Office determined that the procedures for said pardon were carried out by officials from the Ministry of Health and the Ministry of Justice. Due to the rulings of the Inter-American Court of Human Rights on these cases, he asked the Peruvian State to respect its international obligations with the victims and evaluate whether the pardon contravened them. Then, the victims’ lawyers asked a supreme judge to assess whether the presidential pardon complied with the Inter-American Convention on Human Rights, a process called conventionality control.

The Supreme Criminal Enforcement Judge Hugo Núñez Julca annulled, in October 2018, the pardon granted by Kuczynski. He questioned the fact that he was the product of a political negotiation, as well as the form, speed and irregularities of the procedure granted. And Fujimori went back to prison.

This time, the relatives of the victims of the La Cantuta and Barrios Altos cases will not request a conventionality control again, attorney Carlos Rivera said by phone. “We have gone directly to the Inter-American Court, to request a hearing on compliance with the judgment (of the inter-American system on the Barrios Altos and La Cantuta cases) and provisional measures,” he said.

Six Peruvian NGOs also ask the Inter-American Court to issue a resolution annulling Fujimori’s release “based on its jurisprudence” and also according to the decision of May 30, 2018, in which it held that the State Peru had not fully complied with its obligations to investigate, prosecute and punish the serious human rights violations indicated by that court.

The decision of this Thursday of the Constitutional responds to one of the three habeas corpus presented to free Fujimori in recent months, one of them being Fujimori’s current lawyer, César Nakazaki. The autocrat’s defender expects the release to take a couple of days, after a supreme criminal judge reviews the decision.

A press release released by the Constitutional Court indicates that the sentence with the three votes in favor of the habeas corpus “Restores the effects of the resolution of December 24, 2017, which granted humanitarian pardon to the applicant, and orders his release.”

Prime Minister Aníbal Torres, in statements to the radio station radio programsHe rejected the referee’s decision. “(Fujimori) has been sentenced for very serious crimes against the life and liberty of people, he is not only sentenced for homicide, but also for aggravated kidnapping. The court is letting the public know that it guarantees the impunity of those who have a certain amount of power, as is the case with Mr. Fujimori,” he questioned.

“Where are the victims of Barrios Altos and La Cantuta? They kidnapped them, burned them alive, dismembered them, clandestinely buried them. Mr. Fujimori has been punished for crimes of this nature and now he obtains this benefit. It is a sentence that must be followed, but that does not mean that it cannot be criticized, because it violates the fundamental rights of a large sector of Peruvians, who are now going to react,” added the Prime Minister.

At night, while a march was taking place through the streets of downtown Lima that lasted for hours, the Foreign Minister, César Landa, spoke on his Twitter account by pointing out that the decision “is not valid” for contravening the decisions of the Inter-American Court of Human Rights. That body, he indicated, “already ruled on this issue in 2018, recalling the international obligation of the Peruvian State to punish those responsible for these cases and that the victims find justice.”

For three hours the demonstration continues in the center of Lima against the decision of the Constitutional Court to release the autocrat Fujimori. The march was led by former Prime Minister Mirtha Vásquez and relatives of victims of the La Cantuta case pic.twitter.com/2YYxLHAAHt

Gisela Ortiz, the former Minister of Culture and sister of one of the murdered students of La Cantuta, rejected the decision of the Constitutional Court. “Justices Blume, Sardón, and Ferrero have prioritized their political preferences over the rights of victims, due process, and the ruling of the Inter-American Court,” she tweeted.

The magistrates Ferrero, Ernesto Blume and José Luis Sardón, who decided to release the former president, have in the past favored the positions of Fujimorism and conservative sectors with their votes. In 2019, the three endorsed a habeas corpus presented by another of Fujimori’s daughters, Sachi, and allowed the release of Keiko Fujimori when she was in preventive detention while being investigated for money laundering and obstruction of justice in the Odebrecht case.

One of the three members of the court that voted against the autocrat’s release, Eloy Espinosa-Saldaña, said that in Thursday’s debate he argued that the ruling -by Supreme Judge Núñez Julca in 2018- accepted by the Inter-American Court did not allow Fujimori released. He also said that due to the 2017 pardon, Fujimori’s youngest son, the then Minister of Justice, former President Kuczynski and the former Minister of Health are being prosecuted for bribery and influence peddling.

A survivor of the bombings in Gaza: “The wounds of the war have healed, those of memory are still open” | International

The political crisis heats the streets in Peru | International

By admin
Recent Posts
Latest News
Facebook Twitter WhatsApp Telegram
Back to top button
Close
Featured Posts
“Neither left nor right: forward”: this is the third party that wants to end polarization in the US | International
October 10, 2022

“Neither left nor right: forward”: this is the third party that wants to end polarization in the US | International

Ángela Vivanco: “If they are going to carry out a judicial reform, it is important to know what those in charge think”
September 23, 2022

Ángela Vivanco: “If they are going to carry out a judicial reform, it is important to know what those in charge think”

Evi Anna Rauter: The mystery of the anonymous body from Girona that her family searched for in Italy for 32 years | International
May 22, 2022

Evi Anna Rauter: The mystery of the anonymous body from Girona that her family searched for in Italy for 32 years | International

Colombia Elections 2022: Álvaro Uribe disappears from the political scene for the first time in two decades | Presidential Elections Colombia
May 26, 2022

Debate Le Pen – Macron: Lie to me, tell me you love me | International

Argentina discusses whether a guerrilla attack that occurred 46 years ago is a crime against humanity
June 11, 2022