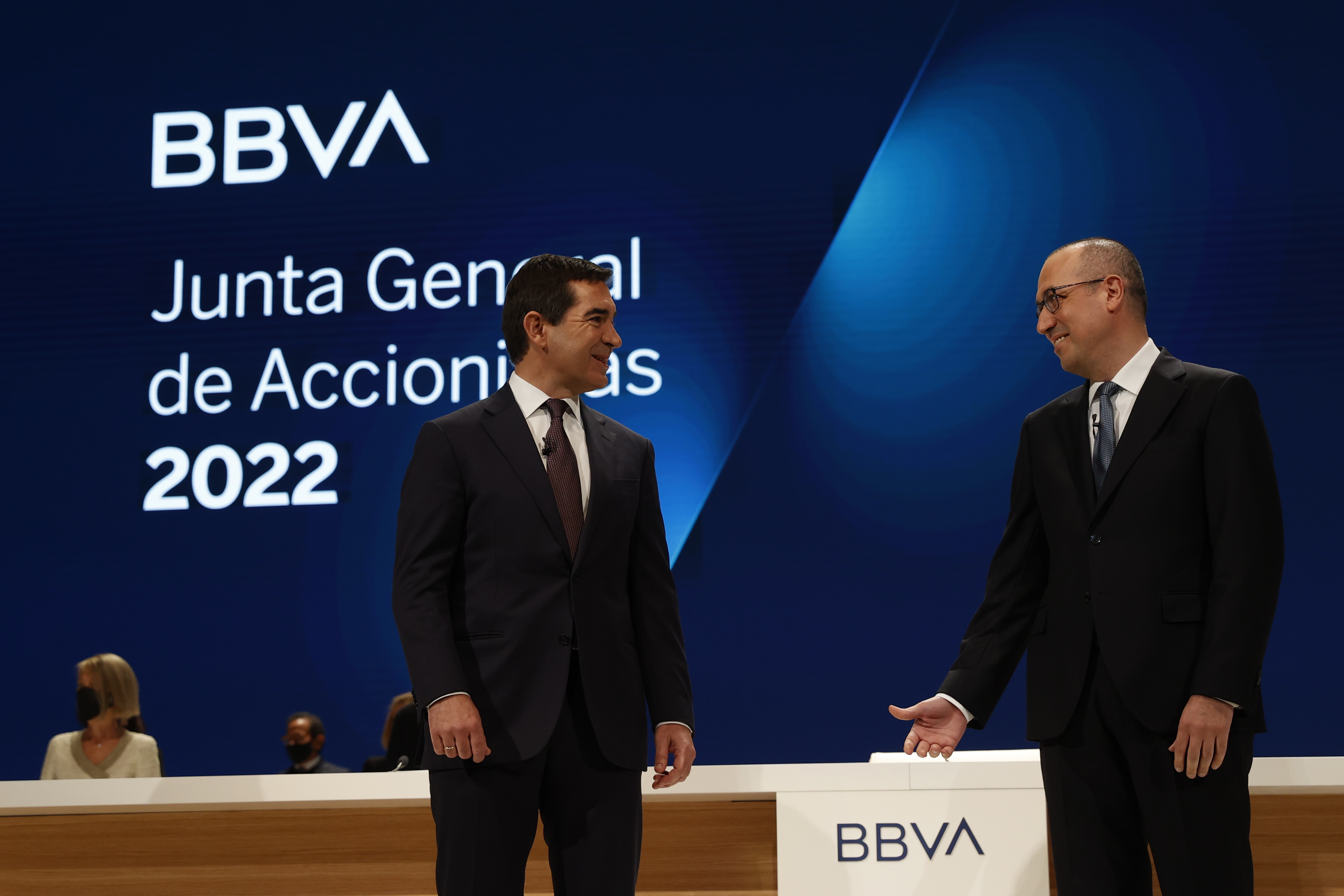 Carlos Torres, president of BBVA, has underlined this Friday at the bank’s general meeting of shareholders, held in Bilbao, the consequences that Russia’s attack on Ukraine will have. Despite the military conflict, the director expects the economic recovery to continue this year, although uncertainty has already risen considerably. “There is no doubt that the war will increase inflation and negatively affect growth, although with important differences between countries,” Torres assured. In addition, he has called for Europe to move towards greater energy independence: “[El conflicto] It should serve to mobilize the economy towards renewable energies with greater speed, if possible”.

As a reflection of the negative impact of the war, the top manager of BBVA has given an example of what happened in the financial markets. “They have seen declines, sharp increases in volatility and sharp rises in the prices of all commodities, especially oil and gas,” he added. The consequences, yes, will not only be economic. In fact, Torres has assured that with the Russian invasion of Ukraine a new world order is entered: “The conflict will have important structural repercussions in geopolitics and in the economy”.

The bank, for its part, faces this situation from a strong position, according to Torres and the bank’s CEO, Onur Genç. Both have highlighted in their speeches to shareholders the positive result of the 2021 financial year, when BBVA obtained its highest profit in the last decade. Thanks to this, the entity has been able to increase the dividend. “This year we propose the highest dividend per share in cash in the last 10 years: 31 euro cents per share, of which 23 cents would be paid next April if approved today. [por este viernes] this meeting, which would be added to the 8 cents already paid on account last October”, explained Torres.

In addition, BBVA is immersed in a share repurchase program for up to 3,500 million: a first tranche of 1,500 million has already been completed and the next one has begun, for another 1,000 million. Then the final tranche will be launched until reaching the total expected figure or 10% of the bank’s share capital. In total, the shareholder’s remuneration could reach 5,500 million if the dividend is added (the payout rose to between 40% and 50%) and the repurchase of shares.

Regarding digitization, Carlos Torres highlighted the company’s good performance in offering digital solutions to its customers. Despite this, he has insisted that these benefits must reach everyone, something for which the Spanish banking sector has had to introduce changes after complaints from those over 65 due to the difficulty in dealing with banks in person. “We have already launched initiatives to facilitate the adaptation of older people or people with special needs, and we will continue working to leave no one behind”, stressed the BBVA chairman. The sector agreed on a series of modifications, among which the increase in office hours and the strengthening of telephone assistance stood out.

Genç, for its part, has added the relevance of the digital channel to boost the bank’s growth. “New customers acquired digitally already represent around 40% of the total, a staggering figure that only amounted to 4% in 2016,” said the CEO. This justifies investments in this line of business such as Atom in the UK, Solarisbank in Europe and Neon in Brazil, as well as the launch of a digital bank in Italy.

Celsa asks creditors for 1,100 million in haircuts to ensure the rescue of SEPI | Economy

By admin
Recent Posts
Latest News
Facebook Twitter WhatsApp Telegram
Back to top button
Close
Featured Posts
The US announces that it will give military aid to Ukraine “until the end” and starts a greater commitment to another 20 countries | International
May 23, 2022

War in Ukraine: Fear returns to the streets of kyiv | International
October 11, 2022

War in Ukraine: Fear returns to the streets of kyiv | International

Violence rebounds in Colombia in the run-up to the elections | Presidential Elections Colombia
May 27, 2022

The DEA recruited relatives of Caro Quintero as informants to capture him
July 24, 2022

Boris Johnson agrees to preserve what was agreed for Northern Ireland in Brexit but calls for changes to the EU | International
May 17, 2022

The tragedy of minors in a war zone: 230 million children live in the bloodiest conflicts in the world | International
1 week ago

The tragedy of minors in a war zone: 230 million children live in the bloodiest conflicts in the world | International

Ukraine – Russia: The blow of the war in Poland tests the response of NATO | International
3 weeks ago

Alex Jones, the conspirator who made business with misinformation | International
October 16, 2022

Alex Jones, the conspirator who made business with misinformation | International