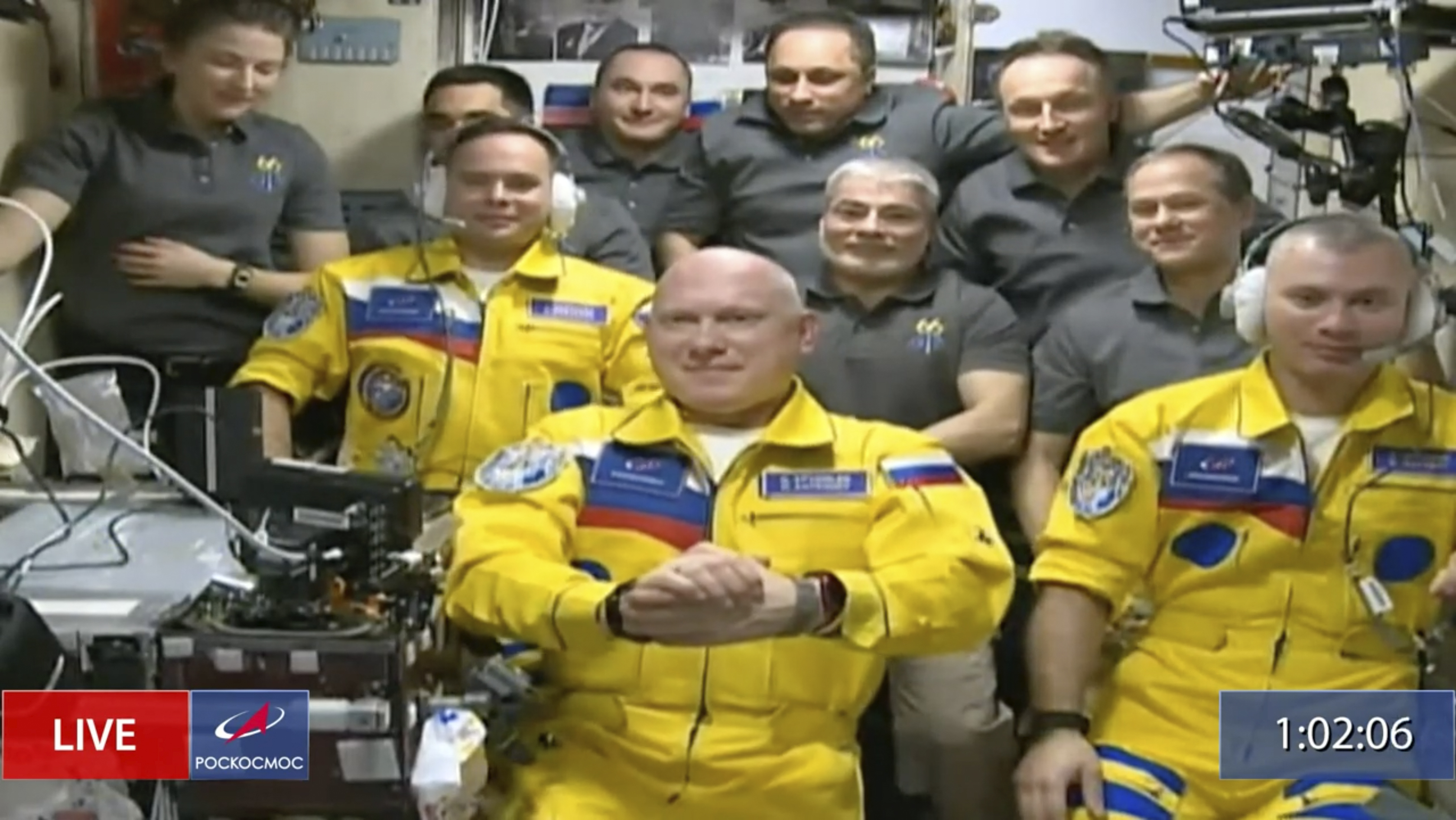 In Russia there are two types of heroes: the military and the cosmonauts. The conquest of space and the Great Patriotic War have been the two great deeds that have marked its recent history, both reasons for national pride for past, present and future generations. For this reason, the appearance of three Russian astronauts in the International Space Station with the colors of Ukraine, while hundreds of kilometers away the offensive on kyiv takes place, has caused a new controversy in the country, still in suspense to know what the future will be. of the Russian television journalist who burst into the live with a sign against the war.

Oleg Artémiev, Denis Matvéyev and Serguéi Korsakov are the first Russian cosmonauts to reach the space platform since the conflict began on February 24. Their yellow suits with blue details and the Russian flag did not go unnoticed, and when they saluted the ground they superficially explained their choice. “It was our turn to choose a color. Anyway, we had a lot of yellow material, so we had to use it, “said Artemiev without clarifying if they even realized that their clothing could be associated with the Ukrainian flag.

The director of the Russian space agency, Dmitri Rogozin, congratulated the cosmonauts without entering into more controversy “for the long mission that they begin” at the station together with two more Russians who were already there, Anton Shkaplerov and Piotr Dubrov.

In addition, the head of Roscosmos published a video right after where he read a monologue from the novel Taras Bulba, by the Russian writer Nikolai Gógol, born in what is now Ukraine. Before, “they heard from parents and grandparents how our land honored everyone,” Rogozin said to the Ukrainians, with different landscapes of that country, including one that emulated their flag with the blue of the sky and the yellow of the fields, in the background. .

More than three weeks after the war began, Rogozin insisted that “there is no bond more sacred than camaraderie.” “There were comrades in other lands, but there were no comrades like in the Russian land,” the manager recited. A few weeks ago, he said, he saw in the invasion of Ukraine “unique opportunities to restore historical cooperation between Roscosmos and Ukrainian enterprises of the former Soviet military and space industry.”

For its part, the Russian press has tiptoed over the colors of the cosmonauts. Most of the media has limited itself to reporting the successful docking of the Soyuz MS-21 spacecraft at the International Space Station “at 10:12 PM, Moscow time.”

Yes, the ultraconservative media addressed the controversy Tsargradwhich in a small editorial pointed out that everything has been a coincidence and criticized the newspaper New York Times for “trying to find a political subtext in everything that happens.”

The controversial appearance of the cosmonauts with the blue and yellow colors has taken place a few days after an editor of the main Russian television, Pervy Kanal, burst in live and in prime time with a poster against the war in Ukraine.

What future awaits Marina Ovsianikova is still unknown. The journalist was sentenced to a fine of around 250 euros for calling the protest in a previously recorded video. However, her action on television could mean up to a prison sentence of several years if she is finally judged with the new law “against disinformation” and “discrediting the army” that the Russian Government approved a week ago. start the conflict.

International space cooperation has also been hit by the war. Launches into space have been canceled and Moscow is threatening not to supply rockets to the United States. Likewise, the European Space Agency suspended the ExoMars-2022 mission, aimed at exploring the presence of past life on the red planet in collaboration with Russia. This country was to provide the Kazachok landing platform while the community block was in charge of the Rosalind Franklin vehicle. “Do we need some kind of rover there? It is not necessary because the lander itself is already a scientific research station, “said the head of Roscosmos, although he acknowledged that the mission would be delayed” a few years.

The wave of fires puts southern Europe on alert | International

Olaf Scholz, the unexpected chancellor of the war, goes through his darkest hours | International
June 5, 2022

Olaf Scholz, the unexpected chancellor of the war, goes through his darkest hours | International

The Kremlin prepares for the escalation in Ukraine with referendums in the occupied territories and mobilizations to go to the front | International
September 20, 2022

The shooting that does not stop in the United States: one and a half every day | International
June 2, 2022

The shooting that does not stop in the United States: one and a half every day | International

Jeannette Vega: Contacts between a minister and a radical Mapuche leader precipitate the first casualty in Boric’s Cabinet
August 26, 2022

Jeannette Vega: Contacts between a minister and a radical Mapuche leader precipitate the first casualty in Boric’s Cabinet

The motion to remove Castillo from office does not reach the votes in the Congress of Peru | International
March 29, 2022

The EU promotes the criminal investigation of war crimes in Ukraine | International
April 11, 2022

Democrats win Arizona, advance in Nevada and caress control of the Senate | International
3 weeks ago

Democrats win Arizona, advance in Nevada and caress control of the Senate | International