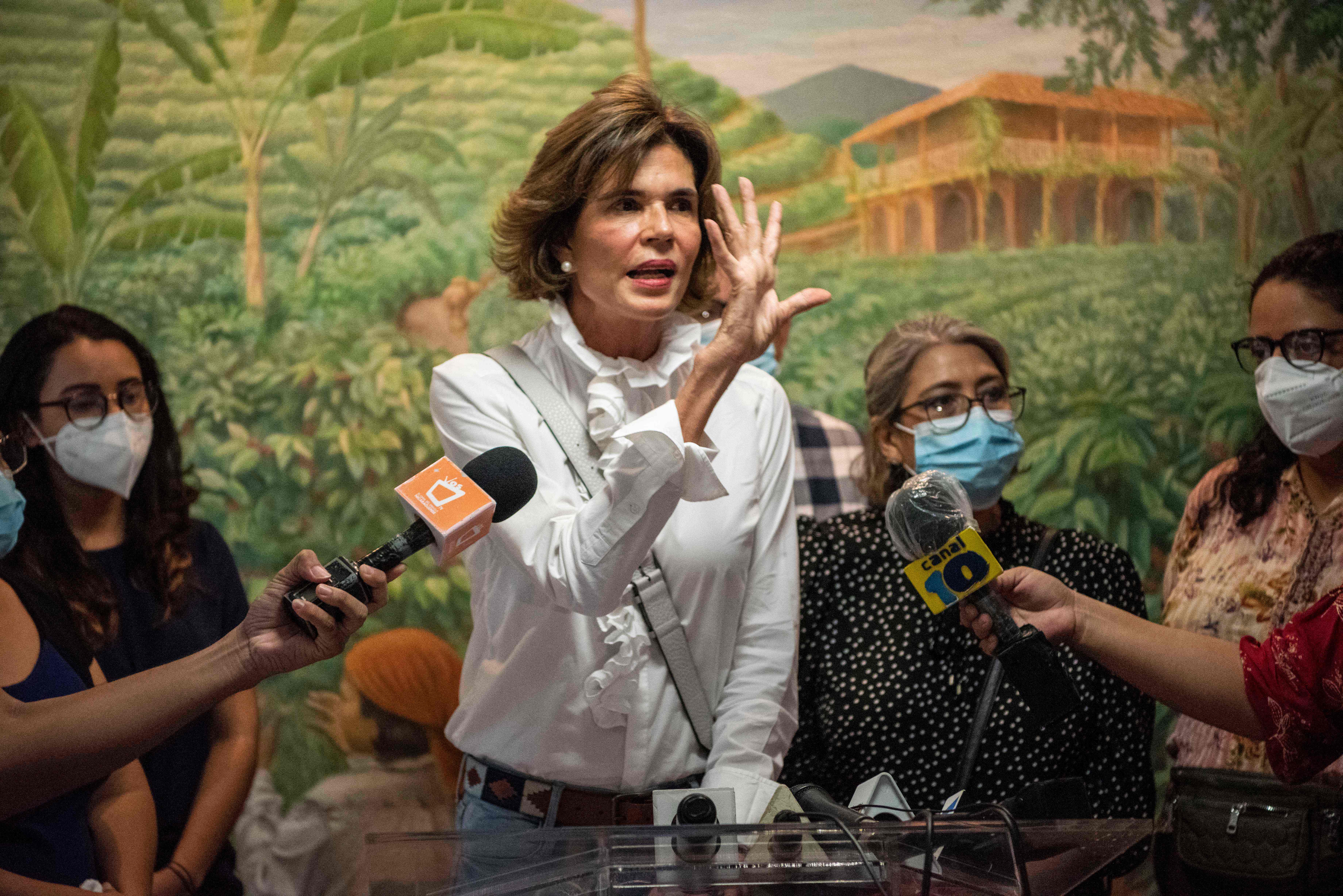 The Nicaraguan justice, controlled by President Daniel Ortega, sentenced the opposition Cristiana Chamorro to eight years in prison on Monday, after carrying out a trial riddled with irregularities. During the process against Chamorro, the Prosecutor’s Office was unable to prove the crime of “money laundering” attributed to the presidential candidate considered, according to polls, the favorite among the Nicaraguan electorate to defeat Ortega and his wife and vice president, Rosario Murillo, in general elections last November. According to judicial sources close to the case and who prefer not to be cited for fear of reprisals, the prosecutors did not even present the expert opinion that would demonstrate the complaint filed against this journalist.

Judge Luden Martín Quiroz, in charge of the Ninth Criminal District Court of Managua and loyal to Sandinismo, ruled guilty and ratified a sentence that the Nicaraguan Center for Human Rights (Cenidh) considers political. At the same time, the agency criticized that the court imposed, apart from the years in prison, “millions of dollars in córdobas and dollars impossible to pay” to Chamorro and the other defendants. “And if they were to commute, it would be equivalent to life imprisonment,” warned the Cenidh.

Chamorro was arrested in June 2021, after she made her presidential aspiration official, based on the citizen support that the polls gave her. He emerged as a figure who could unite the opposition and stand up to the Ortega-Murillo couple at the polls, thanks in part to the moral legacy of his parents: the journalist Pedro Joaquín Chamorro, assassinated in 1978 by the Somocista dictatorship, and his mother , former president Violeta Barrios de Chamorro, who in 1990 defeated Ortega and the Sandinista revolution in historic votes.

Of all the opponents imprisoned by Ortega since June, Chamorro and the former employees of the Violeta Chamorro Foundation —in honor of the former president— that she directed were the only ones to whom the crime of “money laundering” was attributed. In theory, a crime crossed by many international regulations, for which a long trial was foreseen for the Prosecutor’s Office to provide evidence against the NGO that had supported independent journalism for more than 25 years. However, from the stage of formulation of the accusation against Chamorro and the Foundation, the case became a persecution that had, at least, two clear open flanks: to disqualify the pre-candidate and to silence journalism, since almost 60 journalists were called by the Public Prosecutor’s Office to be intimidated during lengthy interrogations.

The trial against Chamorro began on March 3 and concluded with a guilty verdict eight days later, on the 12th of the same month, after Judge Quiroz accelerated the process due to the inability of the Prosecutor’s Office to present evidence. The most disconcerting thing for the consulted lawyers familiar with the process is that the prosecutors did not present the expert opinion carried out on the accounts of the Violeta Foundation with which, supposedly, a money laundering operation would be demonstrated that the official propaganda sold as scandalous.

“Both Judge Luden Martín Quiroz García, Prosecutor Carlos Espinoza and the police officers who testified tried to justify the absence of evidence [la investigación de los peritos] alleging that they did not know her whereabouts, because surely an expert opinion was still being carried out on her”, affirms a source close to the case. For critics of the Ortega government, this and other irregularities show how his regime has turned justice into a theater to punish critical voices in Nicaragua.

One of the last police experts presented as a witness by the Prosecutor’s Office said in one of the hearings that the evidence presented “barely gave reason to suspect money laundering.” However, Chamorro was convicted of “money laundering, goods and assets, improper appropriation and retention, abusive management and ideological falsehood.”

The trial, according to the sources consulted by EL PAÍS, had moments that they call “incredible” when, for example, the policemen who acted as witnesses said they were unaware of the crimes that were being tried. “When questioned by the defense attorneys, the police officers confessed that they had not participated in the acts to which the respective acts signed by them attested, that is, they attested to something of which they were not certain,” he narrates. one of the sources. In addition, all the officers who took the stand assured that the information on which they based their testimony was provided by their bosses. “They also confessed that they did not know about the object of the investigation or what crimes they supposed to be investigating,” he adds.

As in the other political trials in Managua, the trial against Chamorro and the former Violeta Chamorro Foundation was held behind closed doors in the prison of the Directorate of Judicial Assistance, better known as ‘El Chipote’, where political prisoners are locked up. in inhumane conditions and suffering mistreatment, according to family members. The defense attorneys were also unable to exercise an effective defense, since they did not allow their clients to visit.

The others convicted of the same crimes along with the pre-candidate Chamorro were the general accountant and the financial administrator of the Violeta Foundation, Marcos Fletes and Walter Gómez, who were sentenced to 13 years respectively. Chamorro’s personal driver, Pedro Vásquez, was also sentenced to seven years.

The court also imposed a nine-year sentence on Cristiana’s older brother, the opposition Pedro Joaquín Chamorro Barrios, a trial that many interpret as a “revenge” by Ortega against the Chamorro Barrios family, one of the most influential in Nicaragua, especially against Cristiana, the candidate who reminded Ortega his worst electoral defeat of 1990.

Russia starts the school year with a new lesson: “There is no fear of dying for the motherland” | International

By admin
Recent Posts
Latest News
Facebook Twitter WhatsApp Telegram
Back to top button
Close
Featured Posts
“Every conceivable crime” of Trump during the storming of the Capitol | International
July 11, 2022

NATO and EU: Europe is reluctant to completely and immediately corner the Putin regime | International
March 23, 2022

NATO and EU: Europe is reluctant to completely and immediately corner the Putin regime | International

The international community promises more than 6,000 million euros of humanitarian aid to Ukraine | International
May 5, 2022

Tomohiro Kato: Japan hangs the perpetrator of the Akihabara massacre, which shocked the country in 2008 | International
July 26, 2022

Tomohiro Kato: Japan hangs the perpetrator of the Akihabara massacre, which shocked the country in 2008 | International

Who is going to win the US elections according to the polls? | Kiko Llaneras newsletter
3 weeks ago

Who is going to win the US elections according to the polls? | Kiko Llaneras newsletter

Attacks in Israel: Passover of blood in the Holy Land | International
April 17, 2022

Attacks in Israel: Passover of blood in the Holy Land | International

A suicide attack in an educational center in Kabul causes at least 19 deaths | International
September 30, 2022

Results of the elections in the USA 2022, live | Republicans move within 10 seats of controlling the House of Representatives | US Elections
2 weeks ago

Results of the elections in the USA 2022, live | Republicans move within 10 seats of controlling the House of Representatives | US Elections