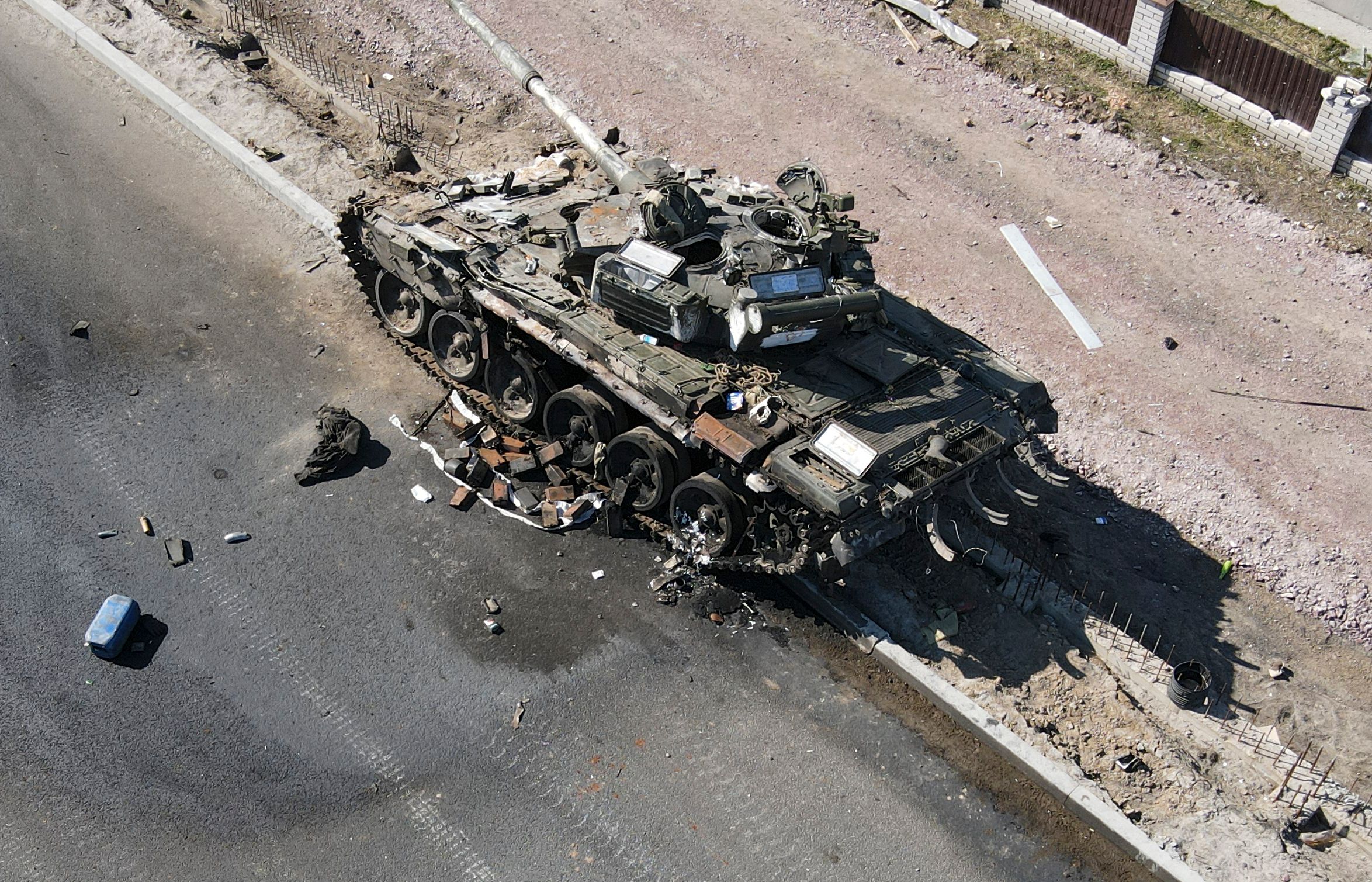 If the military axiom says that beheading the enemy is one of the basic objectives of the war, then the Russian offensive on Ukraine is experiencing significant difficulties after the death of several of its high commands on the front has been confirmed. The Ukrainian government claims to have killed up to five generals and a handful of enemy commanders. About some a sepulchral silence is kept and another risen in a challenging video. Some estimates raise the magnitude of the impact by speaking of thousands of deaths among the Russian military. These casualties represent a serious blow in a campaign that the Kremlin described as “surgical”, despite the fact that it will be a month since the first attack in the coming days.

“Everything is going according to plan,” Vladimir Putin said of the “special military operation for the defense of the Donetsk and Lugansk republics,” a euphemism Moscow uses to refer to this war campaign. The last deceased high command was the deputy chief of the Black Sea Fleet, first-rank captain Andrei Palii. His death was confirmed last Sunday by Telegram by the governor of Sevastopol, Mijaíl Razvozháyev. “He was a friend of Andrei Nikolayevich. He was a very open and kind person, a true officer descended from a military dynasty. He enjoyed great authority in the fleet, he was understanding and attentive, he knew how to be close to anyone, ”said the politician in one of the rare confirmations of senior officers who died in this war.

Palii was born in kyiv in 1971, but after the breakup of the USSR he decided to serve in the Russian navy and refused to take the oath to Ukraine. In addition, during his long career he became deputy head of the Russian Armed Forces in Syria. depending on the medium for post, the captain had received the mission of securing the humanitarian corridor of the port city of Mariupol, the main front in this phase of the war, a city devastated by bombing and where fighting is now going on from house to house, a scenario far removed from what which had been drawn as a quick surgical operation. According to the Ukrainian government, a sniper killed him.

Official sources from the Ukrainian government have also announced the dismissal of eight high-ranking Russian officials, a purge that several media outlets have tried to confirm. The last dismissal that has been added to this supposed list and that has been confirmed is that of the deputy commander of the National Guard Román Gavrílov. The general, previously responsible for his department of internal security and with command over special forces, leaves the direction of the National Guard in full offensive, despite the fact that his forces have an active participation in the war. The Russian authorities attributed the dismissal to his seniority, although Gavrilov, promoted last summer, could have continued to lead the National Guard for another 20 years, according to reports. Kommersant. In addition to the loss of generals, this sudden change in the military hierarchy is another indication that the war is not going as the Kremlin expected.

The first Russian high-ranking officer to be officially killed was Major-General Andrei Sukhovetsky, deputy commander of the 41st Army. Born in 1974, he had been awarded two orders for courage and one for military merit, and his death, announced by the Ukrainians on March 1, was confirmed by an organization of Krasnodarsk officers. Even Putin mentioned him in a speech.

The deaths of other high-ranking Russian soldiers are not clear, but neither has Moscow denied them. The Ukrainian government announced that the Russian 41st Army had been hit again on March 7, when General-Major Vitali Gerasimov, then chief of staff and first deputy commander of this force, was killed. The Ministry of Defense declined to comment on this information to the Reuters agency, and the research portal bellingcat —declared a foreign agent by Russia— published an alleged recording in which two members of the Russian Federal Security Service (FSB) lamented that the soldier had been intercepted because his telecommunication channels were no longer secure in Ukraine.

Another similar case is that of General Andrei Kolésnikov, commander of the 29th Army. The former minister and current advisor to the Ukrainian Ministry of the Interior, Anton Gueraschenko, announced on March 11 that his forces had killed him, although this has not been officially confirmed.

Four days later, on March 15, Gerashchenko also reported on Telegram that the Azov battalion had killed another Russian major-general. Although he illustrated the publication with the image of a dead man, he did not mention his name or his army, and covered his face with various documents and the alleged military insignia.

The Russian deployment includes more than fifty combined arms armies, divisions and brigades. They are joined by other forces, such as the Donetsk and Lugansk militias, the Wagner and Syrian mercenary groups, the Chechen president’s Praetorian Guard and even riot police. In all this time, the Russian Ministry of Defense has only released the official number of victims among its ranks once, 498 dead, and it did so on March 2.

However, local Russian newspapers have subsequently continued to report a steady trickle of burials across the country. During the parliamentary session in which the law that sentences the spread of false information about the war to jail was passed, Tuva Senator Liudmila Narusova asked the Ministry of Defense to confirm whether it was true that 96 of the 100 members of the a company made up of conscripts.

Added to the loss of Russian generals is that of almost a dozen colonels. For example, the commander of the 331st Airborne Forces regiment, Sergei Sukharev, a veteran of the two wars in Chechnya (1994 and 1999) and in South Ossetia (2008). The commander died along with four other officers, according to the Kostroma regional television published on March 17.

Attempts to advance on an increasingly deadlocked front may have increased the risk officers take. Two days before, the newspaper Bashinform published that the commander of the Alkino-2 engineering brigade, Sergei Porojnía, died under mortar fire while personally participating in the construction of a crossing, according to a spokesman for the Russian Union of Veterans of Afghanistan.

“Konstantin’s death is a terrible blow! It hurts to think that he is no longer there, it is impossible to get used to the idea ”, was another of the deaths that the mayor of the city of Nevinnomyssk lamented, on his Instagram account in early March. The commander of the 247th Airborne Forces Regiment, Colonel Konstantin Vizevski, was also killed in this offensive on Ukraine. His father had been a veteran of Afghanistan, and his family decided to bury him in the same place.

The real losses of the war will not be known for a long time. According to US estimates published on February 16 by New York Timesthe Russian troops have so far lost between 3,000 and 7,000 soldiers, while a study carried out by the BBC, which counts the casualties published in a scattered manner, confirms the death of 557 Russian combatants.

The figure could be even higher. This Monday the Russian newspaper Komsomolskaya Pravda published in its digital version for a few minutes that 9,861 Russian soldiers had died and another 16,153 had been wounded, according to screenshots released by several correspondents from The Wall Street Journal. The information disappeared shortly after.

Something similar happens in the case of the Ukrainian forces. President Volodímir Zelenski confirmed the loss of 1,300 soldiers until March 12, although two days before the American estimates multiplied those figures by two and three times.

The Russian press has hardly mentioned in all this time enemy high commands killed by their forces. In one such rare example, Donetsk militia deputy chief Eduard Basurin announced on March 1 that his fighters had killed Ukrainian Brigadier General Dmitry Krasilnikov, the head of the Sever formation. “As a result, the nationalist units of the Donetsk and Luhansk regions were left without a leadership,” he said three weeks ago.

Misinformation abounds and sometimes the Resurrection of enemies left for dead. The Russian press reported on March 10 that former Ukrainian Interior Minister Arsen Avakov had been killed in the siege of Kharkiv. The politician – who assumed the position after the flight of President Viktor Yanukovych following the 2014 Maidan massacre – published a video shortly after in which he denied his own death. “I am in kyiv together with many other people. Propagandists, you will never succeed!” he stated.

Another alleged death was that of Magomed Tushayev, commander of the 14th Special Motorized Regiment of the Russian National Guard, who apparently risen weeks later. The Forces to which this unit belongs are a special case, since they are not attached to the Ministry of Defense, but only answer to the Russian president, and in this particular case they are even more independent: the Chechen units are part of the guard Praetorian of the President of the Caucasian Republic, Ramzan Kadyrov.

Tushayev was declared dead by the Ukrainians on February 27. However, on March 16, he reappeared in a video allegedly recorded that day where he challenged those who claimed that he had been killed in action. “I am Magomed Tushayev. I’m the one the cowardly rabbits of the internet have declared dead. If you are men, tell me where you are, ”he said between laughs, climbing into a military vehicle with an assault rifle in his hands.

However, like all information about this war, this video must be taken with caution: Kadyrov himself published another recording, three days earlier, where he claimed to be in Ukraine, although in the images he only appeared briefly in a basement and the spokesman of Putin, Dmitri Peskov, did not avoid confirming his presence in the combat zone.

Chile: Gabriel Boric asks not to use criticism of Venezuela, Cuba or Nicaragua “to take advantage of internal politics” | International

By admin
Recent Posts
Latest News
Facebook Twitter WhatsApp Telegram
Back to top button
Close
Featured Posts
USA Elections 2024: Trump seeks revenge in the Georgia primaries on those who did not let him cheat in 2020 | International
May 24, 2022

The Pope visits Canada to reiterate the Church’s apologies for abuses of indigenous children in boarding schools | International
July 24, 2022

I approve or reject: six questions and answers about the result of the plebiscite for the new Constitution in Chile
September 4, 2022

I approve or reject: six questions and answers about the result of the plebiscite for the new Constitution in Chile

The five main economies of Latin America will be governed for the first time by the left | International
October 30, 2022

The third anniversary of the social outbreak stirs the political debate in Chile
October 18, 2022

The Johnson Government orders the extradition of Julian Assange to the United States | International
June 17, 2022