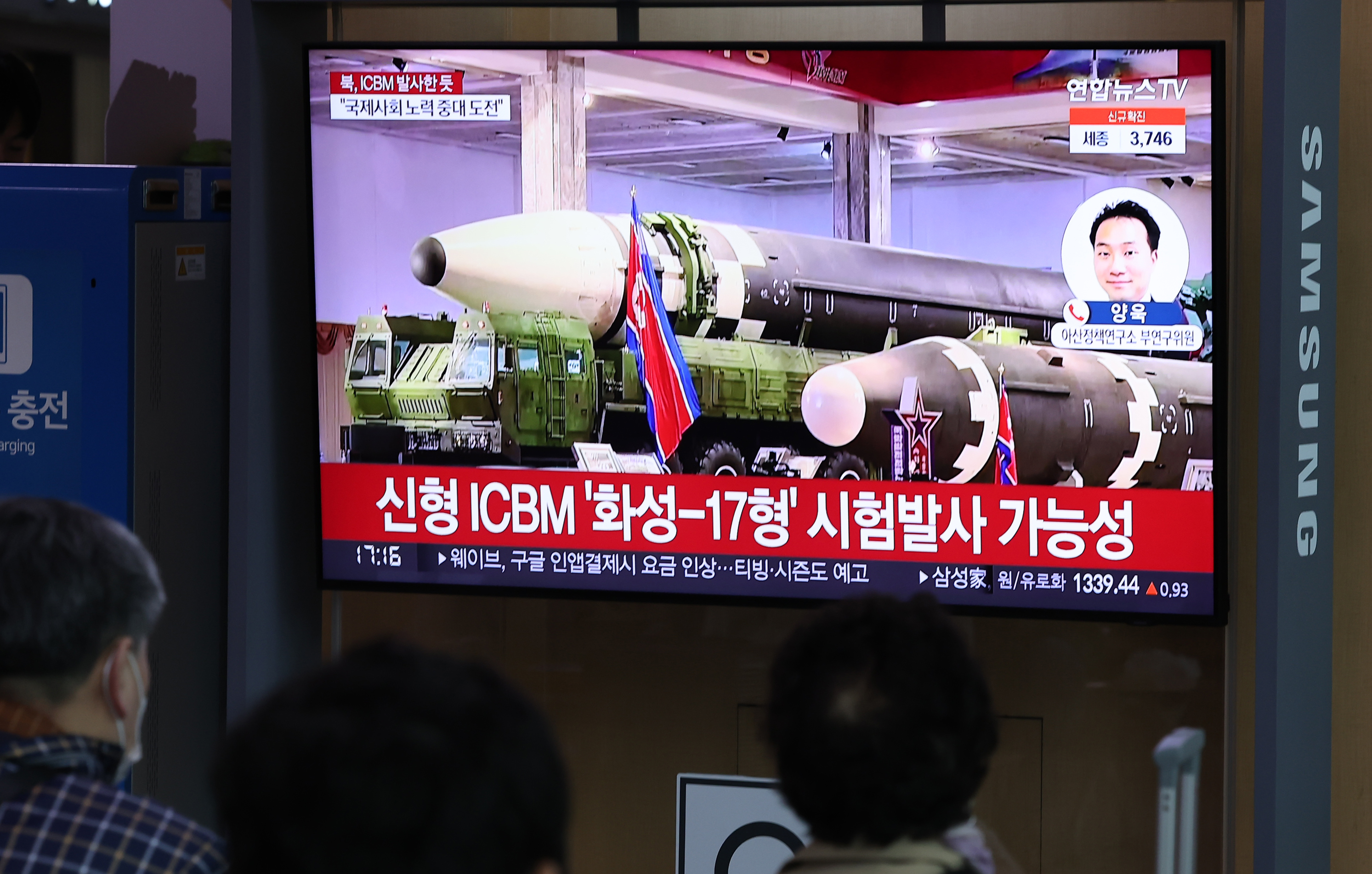 As the world looks to Ukraine, North Korea on Thursday fired what Seoul and Tokyo say is a new model of intercontinental missile (ICBM). The launch blows up the moratorium on long-range missile tests that Pyongyang had declared four years ago and reignites tensions on the peninsula, where denuclearization talks have been stalled since 2019. of Kim Jong-un’s regime of an ICBM, the most powerful projectile in his arsenal and capable of reaching any point in the United States, had taken place in 2017.

The missile, according to the South Korean General Staff, was launched from Sunan, Pyongyang’s airport. It reached a maximum height of 6,200 kilometers and traveled a distance of 1,080 meters before falling into the sea in the waters of the exclusive economic zone (EEZ) of Japan, near the island of Hokkaido, at 3:44 p.m. local time (07:44 a.m., Spanish peninsular time). ). Both Seoul and Tokyo have considered that the one launched this Thursday is “a new type of ICBM”. If confirmed, it could be the Hwasong-17, which Pyongyang presented at a night military parade in October 2020 but had not tested until now. The Hwasong-15 that Pyongyang launched in November 2017 reached a height of 4,475 kilometers and traveled a distance of 906 kilometers.

Immediately after the North’s test, the South’s Armed Forces responded with joint live-fire exercises in which they mobilized some of their main missiles, “in a show of military power against North Korea,” the news agency reported. South Yonhap.

Among the equipment mobilized were a Hyunmoo-2 ground-to-ground, Army Tactical Missile System (ATACMS); a Haesung-II sea-to-land missile and two JDAM air-to-ground missiles, according to the Southern General Staff, quoted by Yonhap. The exercises, according to the South Korean forces, have “confirmed that, if necessary, the Army is capable of a precision attack against the location of any missile launch and its command system.” Both the government in Seoul and the Japanese have called an emergency meeting of their respective security councils. Tokyo has described the launch as a “provocation”, “unacceptable” in the midst of the crisis over the war in Ukraine. Both the United States and South Korea had warned in recent days that Pyongyang could test its new Hwasong-17 by disguising the firing of a space satellite launch.

The launch comes two weeks after the victory in the South’s presidential election of conservative Yoon Suk-yeol, who will take power in May and has promised a policy of toughness against the North after a term of his predecessor, the progressive Moon Jae. -in, in which Seoul tried to build bridges towards its neighbor. In a first reaction, the South Korean president-elect’s transition committee has declared that the ICBM test “represents a serious provocation that threatens our security” and that it is “in direct violation of UN Security Council resolutions.”

Moon, the outgoing South Korean president, has also condemned the launch, recalling that it violates Kim Jong-un’s promise “to the international community” shortly before the first summit between the North Korean supreme leader and then US President Donald Trump. in Singapore in June 2018.

That statement formally ended a streak of near-weekly missile tests — and one nuclear test — throughout 2017 that brought North Korea and the United States to the brink of military conflict.

The thaw process started in 2018 with Seoul and the summit with Trump gave way to a stage of diplomatic negotiations on the denuclearization of the peninsula. But the resounding failure of the Hanoi summit in February 2019 put the process on hold.

With no signs of recovery in the negotiations despite a last summit between Kim and Trump in June 2019, and without the Joe Biden Administration having reactivated them, the North Korean leader gave orders last year to develop new high-tech weapons, a priority that was included in the new five-year plan (2021-2025). In September last year, Pyongyang completed the first test of what it said was a hypersonic missile. Until then, only the United States, Russia and China had this technology, which allows rockets to reach speeds five times higher than the speed of sound and to maneuver their trajectory after firing.

Since the start of this year, North Korea has carried out a dozen missile tests, a pace not seen since the worst of 2017. In January, the regime had hinted that a new ICBM test was being considered. : At a meeting of his Politburo, he indicated that he was studying “the restart of all temporarily suspended activities.”

The resort to launching an ICBM, after a failed shot also from Sunan last week, could represent the prelude to a return to the tensions of five years ago, which put Pyongyang and Washington on a war footing. It could also deal the final blow to Seoul’s policy of rapprochement, when the change of government is about to take place.

North Korea, which is preparing a new military parade for April 15 – the 110th anniversary of the birth of the founder of the regime and grandfather of the current leader, Kim Il Sung – has ordered the modernization of the Sohae space launch center. Satellite images also appear to show the start of construction work at the Punggye-ri nuclear test center, according to experts from the James Martin Center for Non-Proliferation Studies. Pyongyang had closed those facilities during the 2018 thaw, when it invited foreign journalists to witness the blowing up of some of the tunnels and the sealing of the accesses.

In a statement, the White House condemned Thursday’s launch, “a brazen violation of multiple UN resolutions, unnecessarily raising tensions and risking destabilizing the security situation in the region.”

Petro: “Rejecting liberal democracy leads to dictatorship, as has happened in some Latin American countries”

The return of cholera increases the crisis in Haiti

Guayaquil: The levels of violence are boiling in Ecuador | International

Sergio Mattarella: The President of Italy summons Meloni to commission him to form a Government | International
October 21, 2022

Sergio Mattarella: The President of Italy summons Meloni to commission him to form a Government | International

Trained between Russia and NATO and hardened in Donbas: the generals who stopped the invasion of Ukraine | International
2 weeks ago

Trained between Russia and NATO and hardened in Donbas: the generals who stopped the invasion of Ukraine | International

Biden launches a message of unity at a Summit of the Americas marked by absences | International
June 9, 2022

The Italian right crowns Meloni as its new queen | International

The French socialists sign an agreement in principle with Mélenchon that threatens the party’s fragile unity | International
May 4, 2022

The resistance of women in Afghanistan | International
August 7, 2022

The resistance of women in Afghanistan | International

Hurricane ‘Fiona’ hits the Dominican Republic after passing through Puerto Rico, in pictures

Petro: “Rejecting liberal democracy leads to dictatorship, as has happened in some Latin American countries”
3 weeks ago

Petro: “Rejecting liberal democracy leads to dictatorship, as has happened in some Latin American countries”