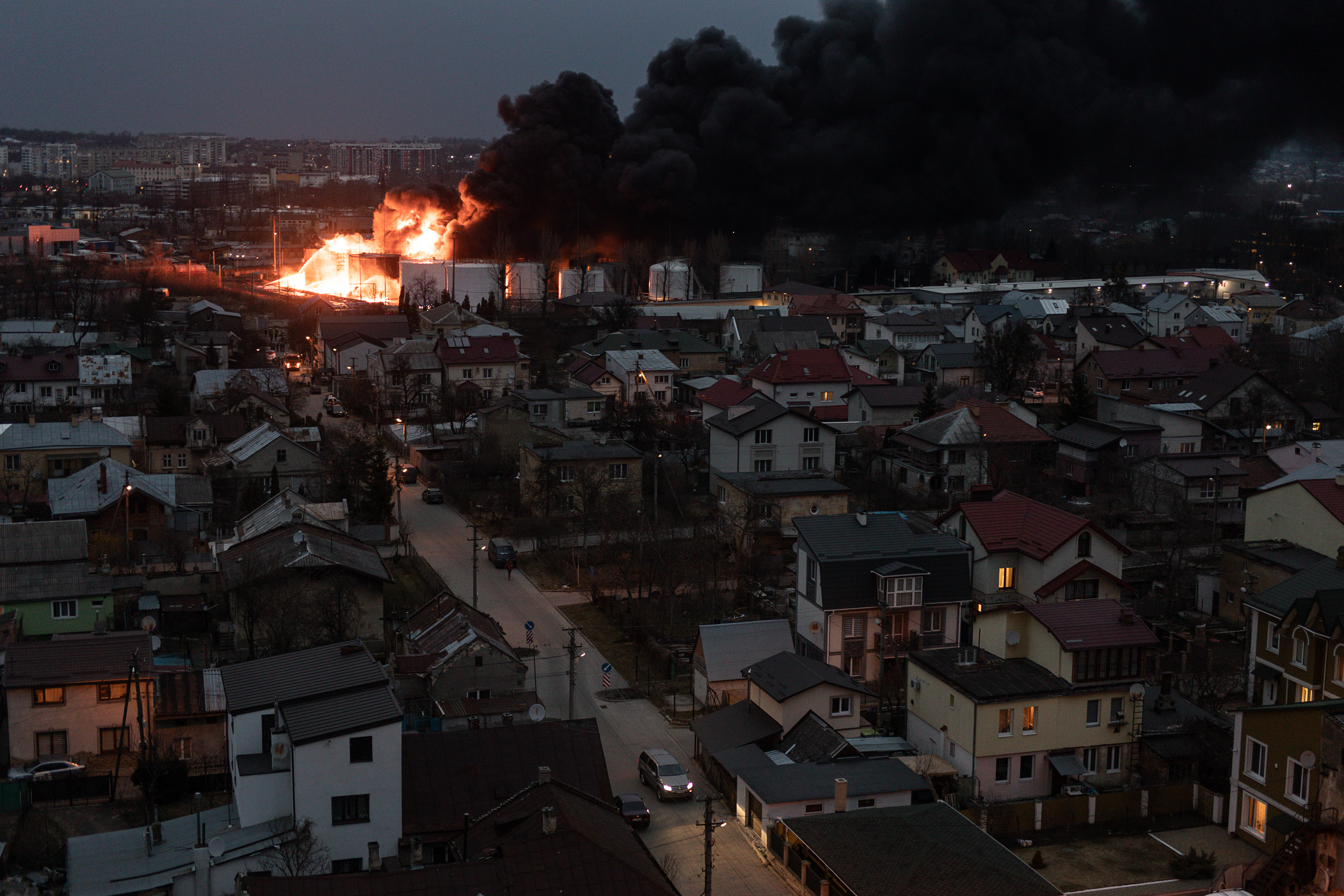 Russia has shaken Lviv, the capital of the Ukrainian rear, this Saturday. Two attacks with Kalibr precision missiles have destroyed one of the main fuel depots in the west of the country and also some military repair facilities for armored vehicles, according to sources consulted by EL PAÍS. Five people have been injured, according to local authorities. The Russian action has coincided with the visit of the president of the United States, Joe Biden, in neighboring Poland.

The Russian aggression occurred when Lviv was beginning to live in relative tranquility, away from the front. The destroyed fuel plant is located within the urban area. The closest houses are located less than 200 meters away. Several residents of the impact zone admitted that they had been confident due to the absence of anti-aircraft sirens in recent days and the retreat of Russian troops on the closest front, that of kyiv – 500 kilometers away. Stanislav and Larissa, a married couple and both 26 years old, said that when the alarms of a possible air attack sounded, they did not leave their apartment, about 200 meters from the destroyed warehouses. “If the sirens had sounded a month ago, at the beginning of the invasion, we would have run to the bomb shelter, but now things seemed calm,” said Stanislav, still shaking after the impact of the three missiles on the doorstep of his home. Both ran after the explosions to a bomb shelter where a hundred people gathered. Some women prayed, others tried to calm the children, who were the ones who were most excited by the situation. The atmosphere was tense and the presence of foreign journalists was a source of constant suspicion and alerts to the police.

The second attack on Lviv targeted an armor repair facility on the outskirts of the city. Both attacks occurred with two Kalibr missiles, according to what the military authorities reported at a press conference. At night there was a third attack in the province of Volyn, north of Lviv, a region that also borders Poland. A missile or a drone from Belarus – the authorities have not yet confirmed it – was shot down near Lutsk. Russian violence in western Ukraine has coincided with Biden’s two-day visit to Poland. The president of the United States was on Friday in Rzeszow, a Polish municipality through which an important part of the weapons from NATO members are supplied to Ukraine.

Lviv has assumed a key role in receiving international aid to Ukraine. Most of the 3.7 million children and women who have left the country for the European Union have passed through this city. It is also the place where deputy ministries of the Government have moved and where the embassies of dozens of countries that left kyiv after the beginning of the Russian invasion of the capital have been established. Hundreds of journalists from media from all over the world meet in Lviv.

Lviv airport was attacked on March 18 with no fatalities. The deadliest blow this province has suffered was on March 13, when Russia killed 35 soldiers and wounded 134 more people in Yavoriv, ​​in the province of Lviv and 20 kilometers from Poland.

The missiles struck Lviv on Saturday a day after Russian military authorities announced they would focus their war efforts on Donbas, in eastern Ukraine, on the other side of the country. In the main city of western Ukraine, the streets of the center were full of families strolling and enjoying the first spring temperatures when the Russian missiles hit. Western Ukraine had become a place of refuge for millions of families fleeing from the front in the East and North.

Natalia Tsiplitska, one of the coordinators of the reception center for displaced people at the Arena football stadium in Lviv, confirmed on Saturday morning that many of her fellow citizens were opting, instead of leaving for Poland and other neighboring EU countries, for stay in Lviv province. “At the beginning of the war, people believed that nowhere was safe from Russia,” Tsiplitska said, “but now they see that the West is safe.” A few hours later, the missiles fell on her city.

United States: The White House announces new sanctions against members of the Duma and a Russian bank | International

The EU is already preparing measures to cut off Russian oil | International
April 9, 2022

Russia: The G-7 warns that it “will never recognize” the borders that Putin wants to impose by force | International
May 14, 2022

Russia: The G-7 warns that it “will never recognize” the borders that Putin wants to impose by force | International

The EU gives the greatest show of support for Ukraine by endorsing its candidacy for the community bloc | International
June 23, 2022

The trickle of new resignations puts Boris Johnson on the ropes | International
July 6, 2022

The cereal war in Ukraine is experienced in the countryside, decided in the ports and suffered in Africa | International
June 5, 2022

The cereal war in Ukraine is experienced in the countryside, decided in the ports and suffered in Africa | International

Venezuela is left out of the UN Human Rights Council | International
October 12, 2022

Venezuela is left out of the UN Human Rights Council | International

Colombia and the ELN officially announce the start of dialogue in Venezuela
October 5, 2022

China Sanctions and Bans Nancy Pelosi After Her Visit to Taiwan | International
August 5, 2022