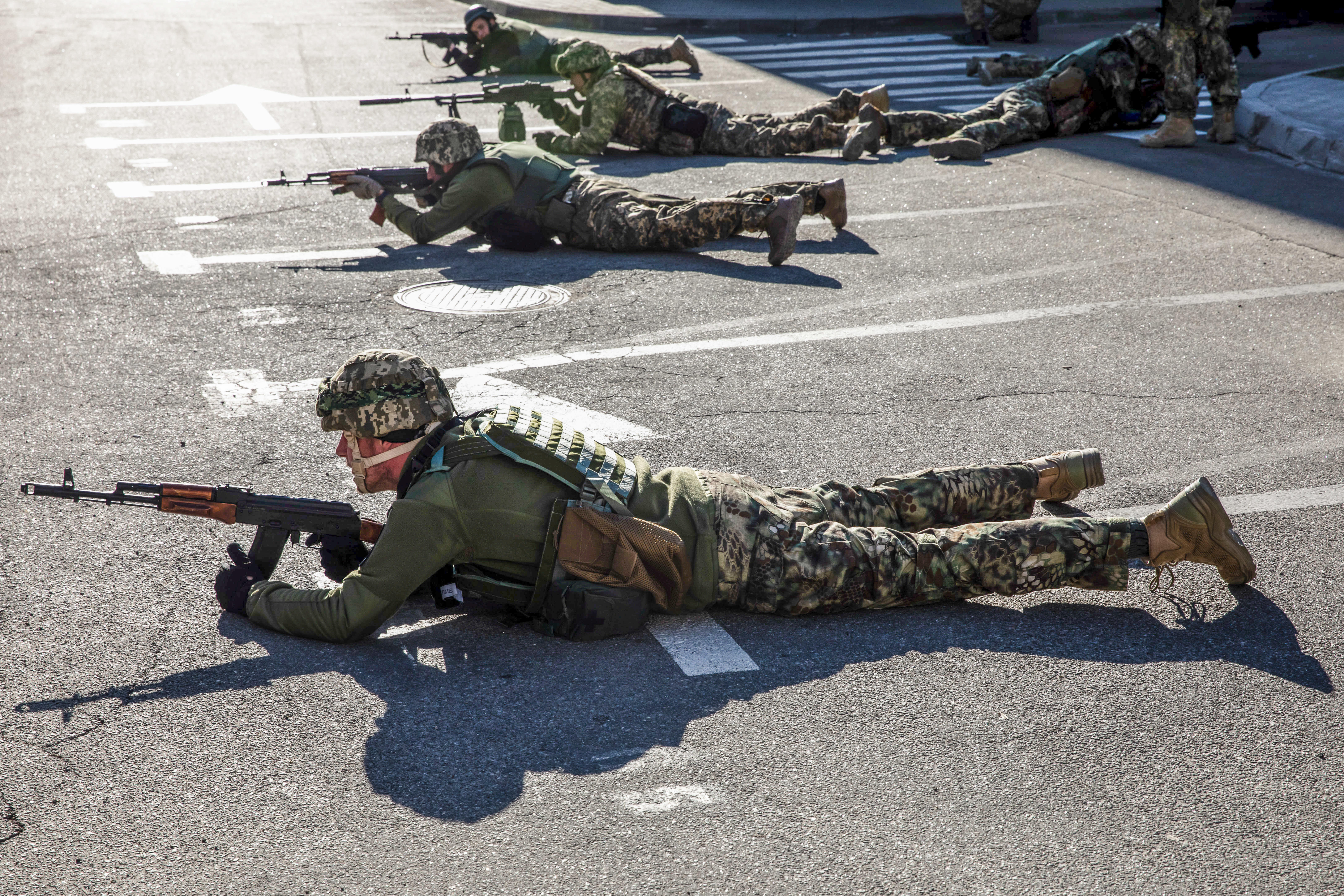 The Ukrainian Armed Forces do not have enough resources to train and arm the hundreds of thousands of people who have wanted to enlist to fight the Russian invader. The Ukrainian Army avoids providing specific figures on the total number of active soldiers, but estimates by experts consulted by EL PAÍS indicate that these would be around 500,000 today, twice as many as those who were in service just before the conflict began. The Ukrainian authorities now choose to distribute the volunteers in other areas that are not strictly military.

At the beginning of the conflict, the Ukrainian Armed Forces officially had 250,000 active professionals, of which 190,000 were military. On paper, Ukraine also had about 200,000 reservists and volunteers in the Territorial Defense Forces, a militarized division that is responsible for local protection and control. We must add the 130,000 police officers and battalions of paramilitary origin that were under the umbrella of the National Guard —the equivalent of the Civil Guard— and now, with martial law, under the orders of the Ministry of Defense. Russia has 900,000 soldiers in service, half a million police or paramilitary units and two million reservists, according to data from the International Institute for Strategic Studies (IISS).

Mijailo Samus, director of the Ukrainian defense studies center New Geopolitics, indicates that the contingent mobilized by Ukraine is much larger today than it was a month ago: there are 300,000 veterans of the war provoked by Russia in 2014 in the Donbas region (east of the country). ) immediately incorporated into units at the front. To this must be added 100,000 more volunteers, according to the Ukrainian press, who were accepted into the Territorial Defense Forces in the first two weeks of the invasion. These units are fundamental in road and municipal access checkpoints, in the search for Russian saboteurs, but also in the armed confrontation, as Samus explains: “The Territorial Defenses were key in the first blow against kyiv, when Russian special operatives They tried to infiltrate the capital and take strategic positions, because they are agile in mobilization and know the city better.”

The war has been raging in Ukraine for a month and one of its immediate consequences is the lack of ammunition and weapons for the national defense forces. This has been made known to its NATO allies by the Ukrainian president, Volodímir Zelenski. Not only the ruler notices it. In the front line of fire, in Kharkov, the member of the Territorial Defense Forces Vlad Hrishenko confirms the same thing in a telephone interview: “Soldiers we already have many, what we need is protection material and weapons”.

Hrishenko is 35 years old and is one of the 400,000 Ukrainians who worked abroad and who have returned to their country because of the war, according to data from the State Border Guard. He had been employed for two years as a security agent in a cruise shipping company. The war surprised him in Panama and he requested a leave of absence to return to the Ukraine. He is serving in a patrol unit of the Territorial Defense Forces. Andrei Demchenko, spokesman for the State Border Guard, stated last Monday at a press conference that the majority of these 400,000 people are men who, once they arrived in their province of origin, have offered to join the ranks.

Sources close to the Ministry of Defense assure that there are not the majority of those who offer to join the ranks once they return to Ukraine, and that many return above all to be with their families. It would be an exaggeration with a propaganda purpose. Despite this, Samus is convinced that there is a majority of men who are willing to fight. His assessment is based on pre-invasion polls in which an estimated 65% of adults said they would take up arms in the event of a Russian attack. “Now there are sure to be more,” he says, illustrating that, even if only 10% of men between the ages of 18 and 60 had volunteered, this would mean a million potential combatants. Adults in this age group cannot leave the country due to the possibility of being mobilized by the Army or required for other essential tasks.

Andrei Shevchenko is a retired military officer and diplomat from the Ukrainian Foreign Ministry. Until 2021 he was ambassador to Canada and now directs the press center of his government in Lviv, the capital of the Ukrainian rear. Shevchenko confirms that recruitment has slowed down, and even stopped dead in kyiv, because there were already enough recruitments in the early stages of the conflict. “What we need now is a period of training for future units to be replaced at the front,” Shevchenko sums up. “What we will not do is, as the Russians do, send untrained people to war as cannon fodder,” he stresses.

Maksim Kozitskii, head of the Lviv military region, provided a figure last Thursday at a press conference that is symptomatic of the mobilization beyond the regular Army: the province has provided 30,000 new soldiers and also has 20,000 applications for join the Territorial Defense Forces. Kozitskii reiterated that they are assigning new applicants to unarmed military training, first aid training or training in strategic economic sectors. The mayor of Lviv, Andrei Sadovii, stated that for the 200,000 displaced people in the city it will be necessary to urgently build new housing. “Now we have entered a new normality, there are already enough soldiers and what we need is to resume productive activity,” Igor Shevchenko, director of international relations at the Vinnitsa Chamber of Commerce, told EL PAÍS on March 15.

Half a hundred recruits loaded with mats waited last Saturday in front of the Lviv headquarters of the Military Prosecutor’s Office of the Western Region of Ukraine. These offices have been set up as one of the registration centers. Several sergeants called the men in platoons of eight or ten to transport them to the training center. The lines of recruits who were accepted were longer in early March, according to an official in charge of dealing with the press.

That same weekend, but in kyiv, 500 kilometers from Lviv, Vladislav Greenberg completed his first week of training. Hours of maneuvers and daily military practice classes, with no time for anything else. Greenberg joined one of the newly minted volunteer battalions that have been regularized since 2014 in the National Guard and are now in the realm of the Armed Forces. He came from Finland, where he is employed as a gardener. There he left his wife and a five month old son. “My wife doesn’t talk to me, she thinks I’ve abandoned them, but she couldn’t stay home while my country burned,” the 31-year-old says on the phone during a break in his instruction, panting from exhaustion. He will be training until he is assigned to combat, a few kilometers from his base. In the worst case, that will be in one or two weeks, “as has happened to other colleagues,” says Greenberg with a tone of concern. He knows that the more time he has in training, the more options he will have to return home.

Rescue work is complicated in the landslide in Las Tejerías, Venezuela

The first big snowfall in Ukraine freezes citizens: “We don’t even have firewood to face the winter” | International

By admin
Recent Posts
Latest News
Facebook Twitter WhatsApp Telegram
Back to top button
Close
Featured Posts
The lesson of the Action Party: the best are missing | Opinion
4 weeks ago

The lesson of the Action Party: the best are missing | Opinion

Jake Sullivan: Chinese and US Security Advisers Meet in Rome as Tensions Rise Over Ukraine | International

Lula da Silva: “They tried to bury me alive and here I am” | International
4 weeks ago

Lula da Silva: “They tried to bury me alive and here I am” | International

Mariano García: Foreign Affairs investigates a complaint about the detention of a Spaniard in Ukraine by the Russian army | International
March 22, 2022