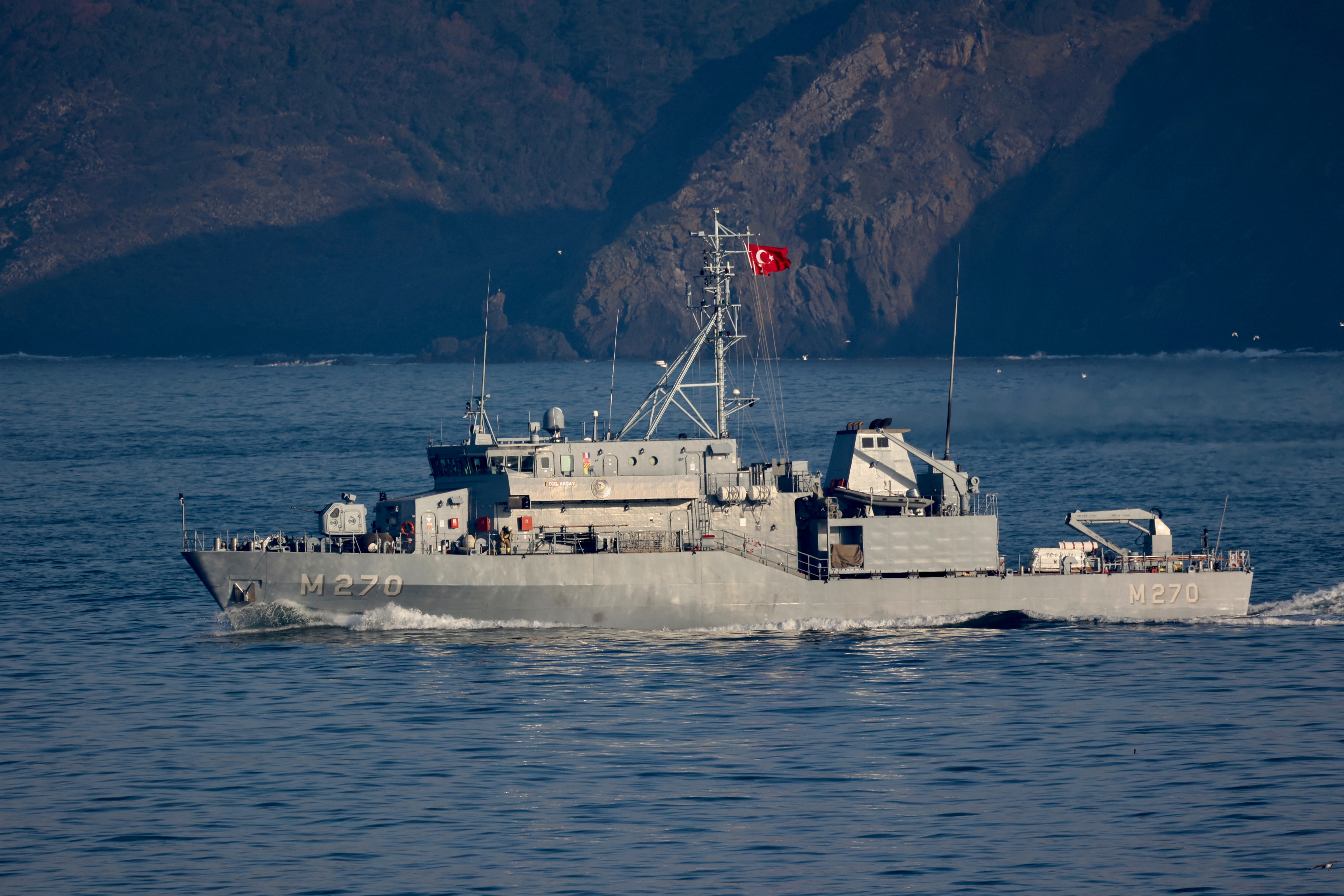 Two naval mines have been found in Turkish waters in the last three days. The first, on Saturday, was discovered by fishermen at the northern entrance to the Bosphorus, which divides Istanbul into two, forcing traffic in this strait to stop for four hours.

The second mine was found Monday morning in the Black Sea, near Bulgarian territorial waters, and fishermen in the area were ordered to take shelter in port. Both mines were removed and subsequently detonated in a controlled manner by Turkish Navy personnel without causing any damage, but these incidents have raised concerns that the Russian invasion of Ukraine will affect traffic on one of the world’s busiest sea lanes. The Turkish Armed Forces have deployed two minesweepers to search for more explosives.

On March 18, the naval station in the Russian port of Novorossiysk issued a message to the ships in the area about the possible presence of “some 420 drifting YAM and YARM-type mines”, and in the following days the naval authorities of Sochi (Russia) and Samsun (Turkey) repeated the alert to ships in their areas. “Due to weather conditions and storms, mines laid by the Ukrainian Naval Forces have been released at the entrance to the ports of Odessa, Ochakov, Chernomorsk and Yuzhni. Ships could explode on contact with drifting mines. Sailors in the northwestern, western and southwestern areas of the Black Sea are asked to navigate with caution,” the message reads.

Then, Viktor Vishnov, deputy head of the Ukrainian Naval Administration, called the announcement “disinformation” by Russia. “This is done to justify the closure of areas of the Black Sea due to the alleged danger of mines,” Vishnov told Reuters. However, the danger of mines has become a fact of life. Not surprisingly, on March 3, a Panamanian-flagged ship owned by an Estonian company sank in waters near the Ukrainian port of Odessa in an incident that has not yet been fully clarified. Experts attribute the explosion either to the impact with a drifting mine or to the fact that the ship was not anchored and hit one of these devices.

Since the beginning of the Russian invasion, there have been unconfirmed reports about a possible mining of these waters by the Ukrainian Navy to prevent an amphibious landing in Odessa. The 1907 Hague Convention prohibits the use of floating mines unless they are anchored and obliges States that use them to notify the placement areas internationally to avoid accidents. In fact, Moscow has denounced that Ukraine has violated this convention.

However, the question of where the mines come from remains open, as Yörük Isik, director of the Istanbul consultancy Bosphorus Observer, specializing in maritime issues, explains to this newspaper: “The Ukrainians have only laid mines in Odessa, since the sea of Azov and Crimean waters are under Russian control. The unknown is: how did the mines get from Odessa to the Bosphorus without mines having also been detected in Romanian or Bulgarian waters? It is also unclear how the Russians can know the number of drifting mines with such accuracy, unless they have dropped them from their anchors or, more likely, are exaggerating the numbers.”

The Turkish Defense Minister, General Hulusi Akar, has explained that the type of mines found are “old models”. In the images of the Turkish televisions it is seen that the surface of the mines is black and clean, which would indicate, according to the analyst Tayfun Özberk, that they are recently placed. “This reinforces the opinion that this mine has not been long in the sea. Because the mines that are in the sea for a long time present some oxidation and a lot of algae ”, he writes in the specialized media Naval News.

The Turkish authorities have prohibited fishermen in the area from going out to fish at night, since the darkness could prevent the sighting of new mines. “We go fishing to earn our bread. Once again, it shows how bad this war is. It even affects us. Without having anything to do with it, we have also become victims, “complained a fisherman from the town of Igneada, near which the second mine was found, in statements to the Turkish Anadolu agency.

Traffic in the Bosphorus has not yet been too affected, said a maritime operator consulted by EL PAÍS, beyond some delays and traffic jams, which are common. About 40,000 ships circulate through this maritime route every year. “During the first five days of the war, we did see a significant reduction in traffic, but now it has recovered. In the direction of the ports of Ukraine there has been a decrease in traffic, but not to those of Russia or the other countries”, assured this source.

Some of the goods destined for Ukraine are being unloaded at the Romanian port of Constanta and from there they are redirected by road or rail to Ukrainian territory. Even American and European companies continue to load Russian and Kazakh oil, as well as other goods, at Russian terminals, explains Isik, who monitors naval movements in the Bosphorus and the Black Sea. This is due to the fact that the sanctions decreed by Washington, London and Brussels have granted a grace period of a month and a half to comply with the current contracts, before the entry into force of the economic retaliation for the Russian invasion. Also, due to the global shortage of containers, since several companies are going to Novorossiysk to load them, even if they are empty. Isik warns that, in the event that mines continue to arrive in Turkish waters and Turkey has to deploy more minesweepers (it has a dozen) or reduce traffic on the Bosphorus, “this would have direct repercussions on the price of raw materials and, in In a certain way, also in the price of oil”.

Minister Soylu: There is no such thing as impossible in Erdogan’s Turkey

The political crisis heats the streets in Peru | International

Check Also
Close
The Venezuelan government and the opposition agree to unfreeze between 3,000 and 5,000 million state funds abroad
34 mins ago

By admin
Recent Posts
Latest News
Facebook Twitter WhatsApp Telegram
Back to top button
Close
Featured Posts
British Labor reconciles with Brexit and promises that the UK will not return to the EU | International
July 4, 2022

The White House anticipates that the US and European allies will agree to new sanctions against Russia | International
March 23, 2022

Gorbachev in his private conversations with Felipe González in 1991: “There are many dangers in every step forward” | International
September 1, 2022

Gorbachev in his private conversations with Felipe González in 1991: “There are many dangers in every step forward” | International

Brazilian elections: Lula against Bolsonaro, the final duel between two titans in Brazil | International
4 weeks ago

A new leader of the Conservative Party of Canada smelling like Donald Trump | International
September 19, 2022

Maria Alyokhina: The leader of the Pussy Riot flees Moscow disguised as a delivery girl: “Putin doesn’t scare me. He is nobody ”| International
May 11, 2022

Maria Alyokhina: The leader of the Pussy Riot flees Moscow disguised as a delivery girl: “Putin doesn’t scare me. He is nobody ”| International

Vandalism harasses Russian communities in Canada after the start of the war in Ukraine | International
March 8, 2022

Andrej Plenkovic: The Prime Minister of Croatia: “It is necessary to clarify if the drone that fell in Zagreb was an intentional act” | International
March 18, 2022

Andrej Plenkovic: The Prime Minister of Croatia: “It is necessary to clarify if the drone that fell in Zagreb was an intentional act” | International