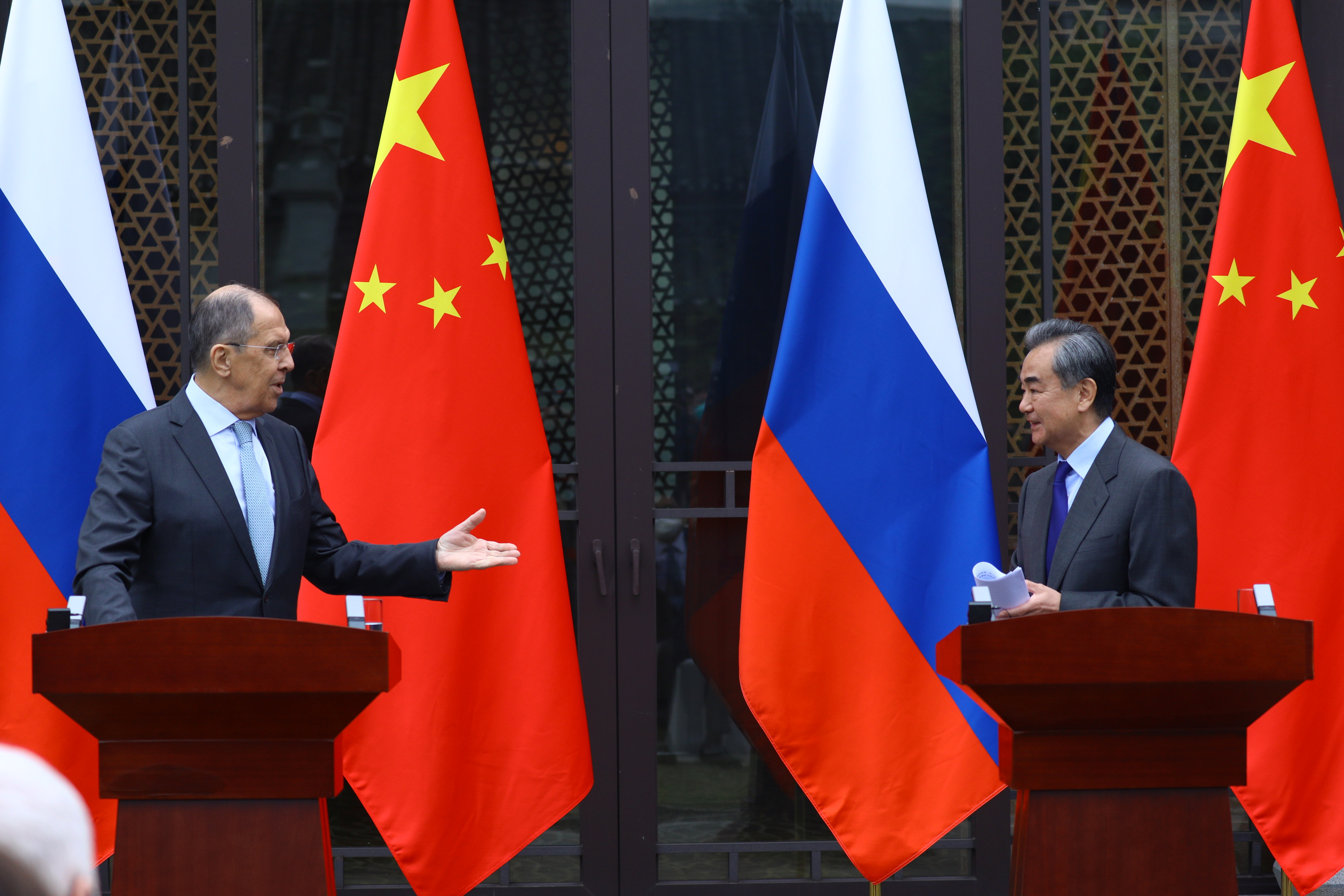 The Russian Foreign Minister, Sergei Lavrov, and his Chinese counterpart, Wang Yi, made a public show of harmony this Wednesday between their governments, strategic partners, one day after the negotiations between Moscow and kyiv in Istanbul gave the first signs of Advance . The meeting between the ministers takes place 48 hours before a key virtual summit is held between Beijing and the European Union, a meeting in which the war in Ukraine will be the absolute protagonist.

Lavrov and Wang have met in person in Huangshan in eastern China for the two-day forum on the future of Afghanistan being held there. According to him, during the conversation between the two foreign ministers, the Russian promised a new “multipolar, fair and democratic” order. Official images of the meeting distributed by Moscow show Lavrov and Wang elbowing each other, both covered with masks, before the flags of their respective countries.

According to the Chinese state television network CGTN, Lavrov had arrived a few hours earlier in the city of Huangshan to participate in two-day meetings with representatives from Pakistan, Iran, Tajikistan, Turkmenistan and Uzbekistan. In the same location, a separate meeting of the so-called “Enlarged Troika” will take place, between the powers with the greatest interests and influence in Afghanistan: China, Russia, the United States and Pakistan. Tom West, the US special representative for Afghanistan, will participate in that meeting, but not Lavrov or Wang.

China and Russia have agreed to intensify their cooperation “in a sustainable and consistent manner” amid “complicated international conditions,” Lavrov told the Russian agency Interfax. That cooperation includes, according to information from the agency, speaking with one voice on global issues, as well as the development of a coordinated foreign policy between the two friendly governments, which had already formalized their strategic partnership at a meeting in Beijing between their respective Presidents Xi Jinping and Vladimir Putin, 20 days before the start of the Russian invasion of Ukraine. The leaders then put forward a proposal for a new world order, an alternative to the one led by the United States and the West.

This Wednesday the Russian minister has reiterated that coordination with Beijing, agreed by Putin and Xi. “We are going through a serious moment in the history of international relations. I am convinced that, after the results, the international situation will become much clearer and, together with you and other like-minded nations, we will move towards a multipolar, fair and democratic world”, Lavrov pointed out.

For his part, Wang stressed that relations between the two countries have “passed the test of international turmoil” and continue to develop steadily, according to Hong Kong’s Phoenix TV. In Beijing, the Foreign Ministry spokesman declared at the department’s daily press conference that “there are no limits to cooperation between Russia and China, there are no limits to our efforts to achieve peace, protect security and oppose hegemony.” The spokesman added: “China-Russia relations are not aligned, do not seek confrontation with others and are not directed against anyone.”

Since the beginning of the war in Ukraine, which China refuses to call an “invasion”, Beijing has adopted a position of neutrality tilted towards Russia, in which it does not condemn Moscow’s aggression, but calls for the lifting of international sanctions – which it considers “illegitimate”. ”—, and blames NATO and the United States for the conflict, for not having responded to Putin’s “legitimate security concerns”. But China has also sent a small humanitarian aid to Ukraine, worth $2.1 million, and is complying with international sanctions.

Beijing has described the situation in Ukraine as “worrying” and has assured that it plays a “constructive” role to support the negotiations between the two governments facing each other on the front. The United States government suspects that Russia has asked its strategic partner for military aid for the war and that China is considering giving it to it, something that Beijing has categorically denied.

Lavrov’s visit comes two days before Chinese President Xi Jinping is due to hold a virtual summit next Friday with European Union leaders, who are calling on China to use its influence with Putin to broker a ceasefire in China. Ukraine. The war will be the main protagonist of that meeting, in which Brussels – China’s second largest trading partner, far above Russia – wants to dissuade Beijing from any temptation to support Moscow in this war through military or economic means. European leaders, according to diplomatic sources, will make it clear to the Xi government that the slightest hint of assistance will be considered intolerable.

In a preparatory conversation with the head of European diplomacy, Josep Borrell, Wang warned the EU that “the old mentality of the Cold War and confrontation between camps is no longer practicable in Europe, and the practice of choosing sides and dividing to the world is even less desirable,” according to the Chinese Foreign Ministry statement.

The meeting between Lavrov and Wang came a day after talks between kyiv and Moscow yielded the most apparent progress to date. Ukraine has offered to seal its neutrality and therefore renounce its entry into NATO, in exchange for guarantees of its security. He has also spoken for the first time of negotiating the situation of the Crimean peninsula, which Russia illegally annexed in 2014, although within 15 years. The situation in Donbas, the Russian-speaking region in western Ukraine, would be addressed in a future meeting between Putin and his Ukrainian counterpart, Volodymyr Zelensky.

Salomón López Smith: Vicious against the Mayagnas in Nicaragua: another indigenous activist murdered in an atrocious way | International

Obama: “Putin is a threat to European democracy” | International

War in Ukraine: Russia launches fierce attacks in Lugansk and bombs a school where dozens of people were sheltering | International

Macron appoints a continuity government with heavyweights from the moderate right | International
May 20, 2022

What are the Kinzhal hypersonic missiles that Russia has launched against Ukraine and how do they work? | International
March 21, 2022

What are the Kinzhal hypersonic missiles that Russia has launched against Ukraine and how do they work? | International

Where do I have to vote? Keys to the elections in Colombia 2022 | International

Ayman Hadhud: The suspicious disappearance and death of an Egyptian economist clouds the regime’s campaign to clean its image | International
May 2, 2022

Zelenski, the best weapon of war in Ukraine | International
March 20, 2022