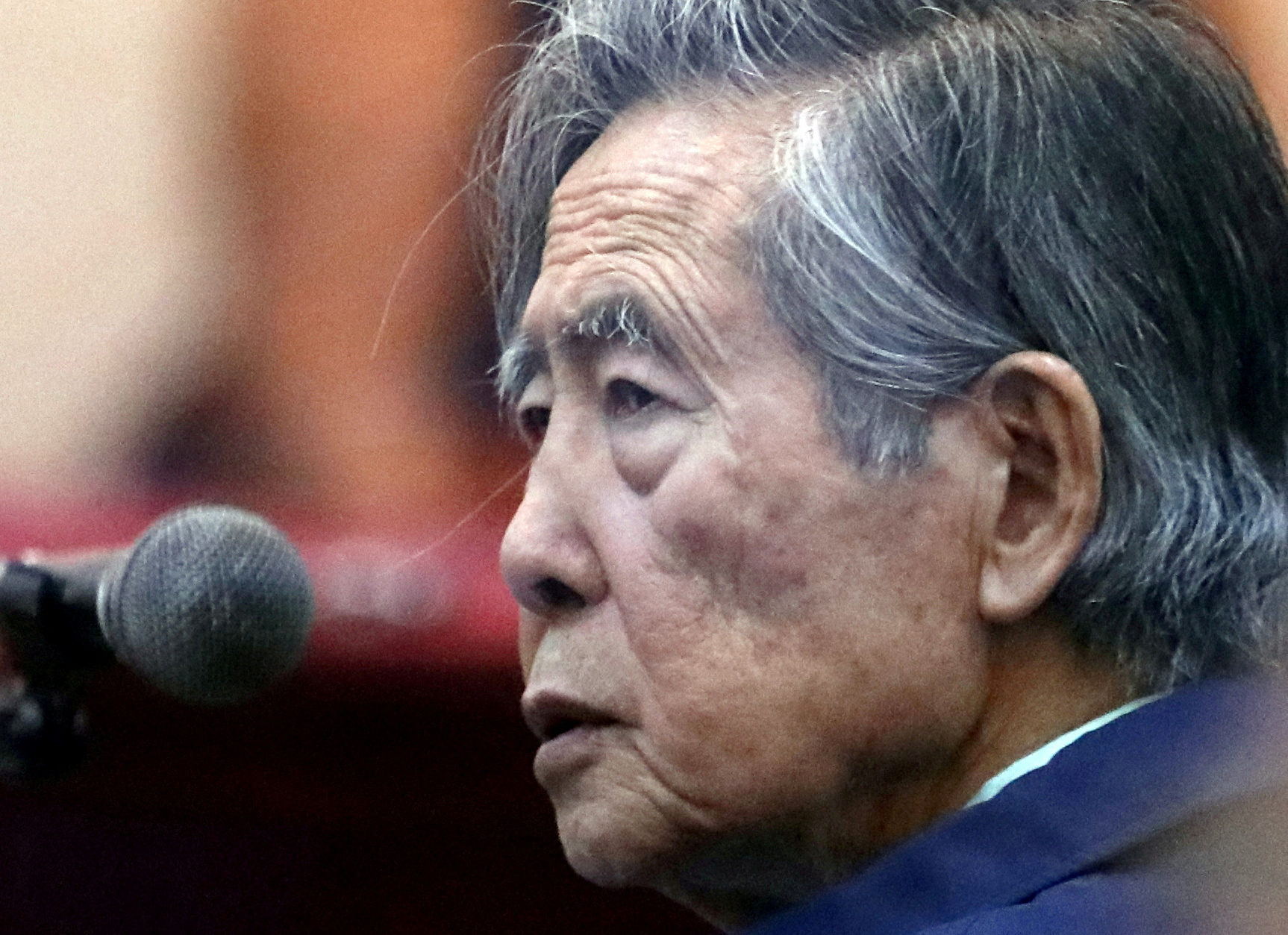 Peru will comply with the request of the Inter-American Court of Human Rights (IACHR) to suspend the release of former President Alberto Fujimori (1990-2000), according to the supranational prosecutor, Carlos Reaño, reported Wednesday. His decision is known two weeks after the Constitutional Court granted that benefit to the former president for humanitarian reasons in a vote that was tied three to three, and which was decided by the president of the collegiate, a lawyer who was a candidate for Fujimorism when he applied for that body in 2017.

The Inter-American Court asked the Peruvian State mid-afternoon on Wednesday to “refrain from executing the order of the Constitutional Court to release” Fujimori until the Inter-American court decides the provisional measures requested by the victims of the La Cantuta and Barrios massacres. Altos upon learning two weeks ago of the sudden decision of the Constitutional Court on a habeas corpus presented in 2020.

In that request, the lawyer Gregorio Parco, despite not being the legal defender of the prisoner, requested his release in the context of the coronavirus pandemic, arguing the advanced age of the detainee (currently 83 years old), the fact that he did not represent a danger to society and impaired health.

In 2009, the autocrat was sentenced to 25 years in prison as the direct perpetrator of aggravated homicide and serious injuries committed by the Colina military detachment, a death squad created during his government that, under the pretext of fighting terrorism, murdered dozens of of civilians, some of them opponents of the regime.

In November 1991, the Colina Group murdered 15 people -among them an eight-year-old boy- in a building in Barrios Altos (downtown Lima), while in July 1992 it kidnapped nine students and a professor from the National University of Education La Cantuta, who were extrajudicially executed. The following year, some of the bodies were found charred east of the capital.

The sentence that found Fujimori guilty in 2009 was the product of a long process in the inter-American justice system to which the victims of the two massacres turned, given the impossibility for the Peruvian jurisdiction to investigate and punish those responsible. The Fujimori government even granted amnesty to the members of the Colina Detachment for the crimes he committed.

In a press release dated March 17, the Constitutional Court stated that by declaring the habeas corpus restored the effects of the humanitarian pardon granted to Fujimori by former President Pedro Pablo Kuczynski on Christmas Eve 2017, and ordered his release. The pardon came after a negotiation with then-congressman Kenji Fujimori, son of the former president, and other dissident parliamentarians from Fujimori in exchange for supporting him with votes to avoid being removed from office, in the midst of an offensive led by the parliamentary caucus that responded under the orders of another of Fujimori’s daughters, Keiko, defeated by Kuczynski in the 2016 presidential elections.

Weeks later, the Ombudsman’s Office demonstrated that the procedures that led to the pardon were irregular. In addition, due to the rulings of the Inter-American Court on the Barrios Altos and La Cantuta cases, said court asked the Peruvian State to fulfill its obligations to the victims and assess whether the pardon violated them. The victims’ lawyers asked a supreme judge to assess whether the presidential pardon complied with the Inter-American Convention on Human Rights, a process called conventionality control. The consequence of this process was the resolution of the supreme criminal judge Hugo Núñez that annulled the pardon in 2018, for having been the product of a political negotiation, and due to irregularities in the process. Fujimori then returned to prison.

On Monday night, one of Fujimori’s lawyers, Elio Riera, stated that since there is still no resolution from the Inter-American Court, but rather a communication sent to the Peruvian State by the secretary of that entity, “it would be unfeasible to execute” the request of the Inter-American court. Hours earlier, Fujimori’s eldest daughter visited her father in the detention center and announced to the press that they expected her father’s release this Friday.

After 9 p.m. on Wednesday, the leader of Fuerza Popular broadcast an audio rejecting the request of the Inter-American Court. “In one more chapter of a series of injustices against my father, an international court that has always been recognized for its ideological bias is now trying to prevent the release of Alberto Fujimori through a simple document,” she commented.

“It is in the hands of the Government to acquiesce or not to a measure as precarious as it is unfair. If there were a minimum of balance in his evaluation, he should not disregard the ruling of the Constitutional Court. If I give in to such a perverse and inhuman maneuver, my family holds this government responsible for the consequences that its decision may have on the life and health of Alberto Fujimori,” added the former presidential candidate, who is facing trial for money laundering. and obstruction of justice in the Odebrecht case.

Positions in the Constitutional

The Constitutional ruling was released this Monday. In it, the rapporteur in favor of the appeal, Ernesto Blume, questions the judicial decisions that annulled the 2017 pardon, alleging that the judges pointed out “subjective assumptions about irregularities (in the process) that are not such” and says that the “objective end of the habeas corpus was to “avoid the death of the inmate in prison”. In addition, Blume considers that the criminal judge who annulled the pardon in 2018 was not competent for said decision.

In one of the three votes against, Judge Marianella Ledesma revealed that the resolutions that annulled the pardon were not in the file. “The three magistrates have annulled resolutions that they have never read,” she said. According to the jurist Úrsula Indacochea, the Constitutional Court contravened its own jurisprudence by ruling on documents that did not work in the case, she commented on Twitter.

For Judge Ledesma, “the sentence has seriously damaged the legitimacy of the Peruvian constitutional justice given the contempt for human rights, especially with respect to those rights that are within the scope of protection of the Inter-American Court,” she maintains in a statement. of the 86 pages of his vote against.

“With this way of proceeding, the three judges make fun of the memory of the deceased, the dignity of their families and the moral conscience of the country,” adds the former president of the Constitutional Court. Ledesma adds that the sentence benefits the youngest son of Fujimori and Kuczynski, who face a trial for a crime against the public administration in the form of bribery for having negotiated the pardon in 2017.

Justices Ferrero, Blume and José Luis Sardón, who voted to release the former president, are known for being close to Fujimorism and conservative sectors. In 2019, the three endorsed a habeas corpus presented by Sachi, another of Fujimori’s daughters, and allowed the release of the leader of Keiko Fujimori when she was in preventive detention while being investigated for money laundering and obstruction of justice in the Odebrecht case. The three chose to accelerate this file because two of them have expired, Ferrero became president in January -with the casting vote- and Congress began the process a few weeks ago to elect the new Constitutional magistrates, and replace those who must go.

Cannibalism, pacts with the devil and less sneaky strategies to win elections in Brazil | International

Brazil Elections 2022: Defeating Bolsonarismo is going to be much more difficult than we imagined | International

North Korea dismisses Biden’s tour of Asia with the firing of three missiles, one intercontinental | International

The woman who grows roses 30 kilometers from the war front in Ukraine | International
June 12, 2022

From the Russia House to the Russian War Crimes House: Ukraine steps up its presence in Davos | International
May 23, 2022

From the Russia House to the Russian War Crimes House: Ukraine steps up its presence in Davos | International

One of the ‘Beatles’ of the Islamic State, sentenced to life in prison for the beheading of Americans in Syria and Iraq | International
August 19, 2022

One of the ‘Beatles’ of the Islamic State, sentenced to life in prison for the beheading of Americans in Syria and Iraq | International

Results of the elections in Brazil: total vote, by regions and municipalities | International
October 3, 2022

Results of the elections in Brazil: total vote, by regions and municipalities | International

Alps: Rescue teams search for at least 15 missing from a calving glacier in Italy with little hope of finding them alive | International
July 4, 2022

Alps: Rescue teams search for at least 15 missing from a calving glacier in Italy with little hope of finding them alive | International

Expulsion of Hu Jintao: Xi and Xiism to the Nth Power | International
October 22, 2022

Expulsion of Hu Jintao: Xi and Xiism to the Nth Power | International

Portugal is facing a wave of fires that have already affected 2,500 hectares | International
July 11, 2022

Portugal is facing a wave of fires that have already affected 2,500 hectares | International

Elections in France: The mystery of Macron: no other French president has been so hated | International
April 19, 2022

Elections in France: The mystery of Macron: no other French president has been so hated | International