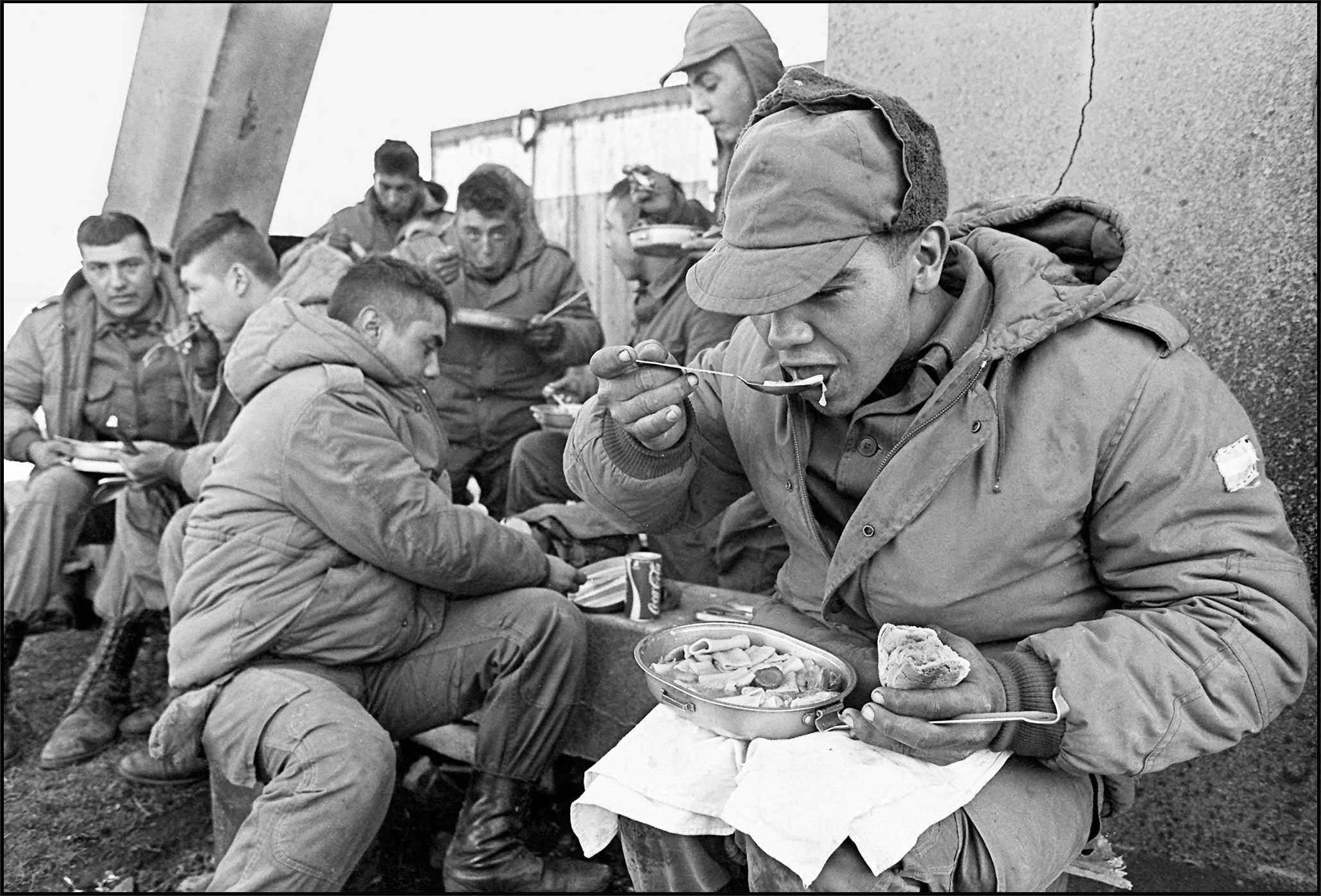 “I propose an exercise,” says Sergio Marocco, a veteran of the Malvinas War. “Imagine that he is 74 days without bathing and with the same clothes. Only that. Do not think about the cold, that he lives wet and that he is very hungry. When I was taken prisoner, I took a bath six times in one day, and I was one of many who threw our clothes overboard. The smell of my own clothes I do not forget. Now I bathe three times a day, and in hot places I change my clothes up to four times. That was the war for me, you don’t forget anymore”. In 1982, Marocco was completing his compulsory military service in the Marine Infantry Battalion No. 5, BIM 5, as it is popularly known in Río Grande, Tierra del Fuego province, 2,500 kilometers south of Buenos Aires. He was 19 years old and they sent him as a private to Malvinas.

Marocco says that in 1982 they were all “young kids, very cute.” “We still played with rubber bands”, he remembers and they did “the colimba”. This is how the obligatory militia was called in Argentina, for “run, clean, sweep”. Young people without military training were free labor in the barracks, and with that symbolic burden they arrived on the islands. “A military institution has a pyramid of command and the largest base was the conscript soldier. The career personnel directed and, for them, we were not part of the institution. You had professional soldiers and kids who came to lend a hand, because we had never had a rifle in our hands”, says Marocco.

40 years after the start of the war against the United Kingdom, the line between professionals and colimbas is what still structures the Malvinas ex-combatant centers. In Argentina there are 254 associations. Only in the City of Buenos Aires there are 11 centers, and 91 in the province of the same name. In the rest of the country, districts like Córdoba have 15. The common denominator is that conscripts and career soldiers do not mix. And that also draws the speeches of each center. The former were born as a shelter among peers, to claim the rights of ex-combatants and, above all, to oppose the “demalvinization” strategy used by the democratic transition to bury the symbols of the dictatorship. The latter raise the flag of military honor, speak of historical deeds and are not prone to self-criticism.

“There are still those disagreements between those who were soldiers and the cadre personnel. The problem is how to separate now that these career personnel were part of a dictatorship”, says Marocco. And he assures that the only exception to the division rule is the Rio Grande War Veterans Center, which he is part of. Both sides coexist there. “There are heroes who were kids who were in their neighborhood and there are also military personnel,” he explains.

Marocco, like many of his companions, knew of the torture and ill-treatment of the soldiers, perpetrated by their superiors. It was the extension of the logic of State terrorism under the figure of friendly fire. The Cecim, one of the first ex-combatant centers in Argentina, founded in 1983 in the city of La Plata (60 kilometers from Buenos Aires), filed legal complaints against the officers from the beginning. “We promote causes so that the soldiers who staked conscripts and Englishmen who committed war crimes are sentenced,” says Mario Volpe, a member of Cecim. Other centers don’t even want to hear about prosecuting their comrades-in-arms.

The Argentine dictatorship sent some 23,000 combatants to the Malvinas, of which more than 12,500 were young people between 18 and 20 years old, generally born in 1962 and 1963. The post-war period was hard for them. In June 1982, the de facto government was tottering. He had failed in his flight forward and the Plaza de Mayo no longer gathered tens of thousands intoxicated with nationalism and shouting ‘vivas’ to the dictator Leopoldo Galtieri. The soldiers caught the general disrepute of the Armed Forces, responsible for tens of thousands of murders since coming to power in 1976. As members of the defeated side, the dictatorship returned them to the continent through the back door.

In the Falklands War, which ended on June 25, 1982, 650 Argentines and 255 British died. Days after returning home, the Argentine soldiers received a written order from the Armed Forces asking them, in the “name of the Homeland,” for a “new effort.” Soldiers were not to talk about their combat experience, nor be “reckless” with opinions about the war. They were also asked not to “get carried away” by alarming news in order to “perpetuate in a heroic way how our soldiers gave their lives for national sovereignty.”

The demalvinization process continued during democracy. It was a strategy to turn the page on the dictatorship, but at the cost of the silence and invisibility of its protagonists. “The only space we found to be able to talk about these issues was in the veterans centers,” says Marocco. “It was the only place where they didn’t look at me like I was crazy. The one next to him starved like me, he froze just like me, they shot him like I did, he killed people. These are difficult things to talk about with someone who hasn’t experienced that.”

The successive democratic governments gradually released the post-war corset. The ex-combatants achieved pensions equivalent to three minimum pensions, in addition to other benefits. The pensions caused another crack, between those who had fought in the Malvinas and the “continental” soldiers, who had participated in the conflict from the rear, without setting foot in the archipelago.

During the last years, the identification of the Argentines buried without name in the island cemetery of Darwin served to heal wounds. In 2017, the Argentine Forensic Anthropology Team (EAAF) and the Red Cross named 115 soldiers who shared a mass grave with 121 bodies. In September of last year, meanwhile, six other bodies were identified, all Argentine soldiers who died aboard a Puma helicopter that was transporting explosives and was hit by a British missile.

Plebiscite 2022 for the new Constitution of Chile, live | Chile closes the polls and begins the counting of votes of the plebiscite

The struggle for power breaks out in Sri Lanka after the resignation of the president | International
July 15, 2022

Four killed in Memphis by the shooting of a 19-year-old | International
September 8, 2022

Doña Maria, 72 years enslaved by three generations of a family in Brazil | International
May 21, 2022

Doña Maria, 72 years enslaved by three generations of a family in Brazil | International

Guy Refitt: US justice sentences one of the Capitol attackers to seven years in prison | International
August 2, 2022

Guy Refitt: US justice sentences one of the Capitol attackers to seven years in prison | International

Boric: “The deep reasons for the Chilean malaise are still present”
October 1, 2022

Boric: “The deep reasons for the Chilean malaise are still present”

Hernán Condori: The Peruvian Congress forces the resignation of the Minister of Health for promoting pseudoscience | International
April 1, 2022

Hernán Condori: The Peruvian Congress forces the resignation of the Minister of Health for promoting pseudoscience | International