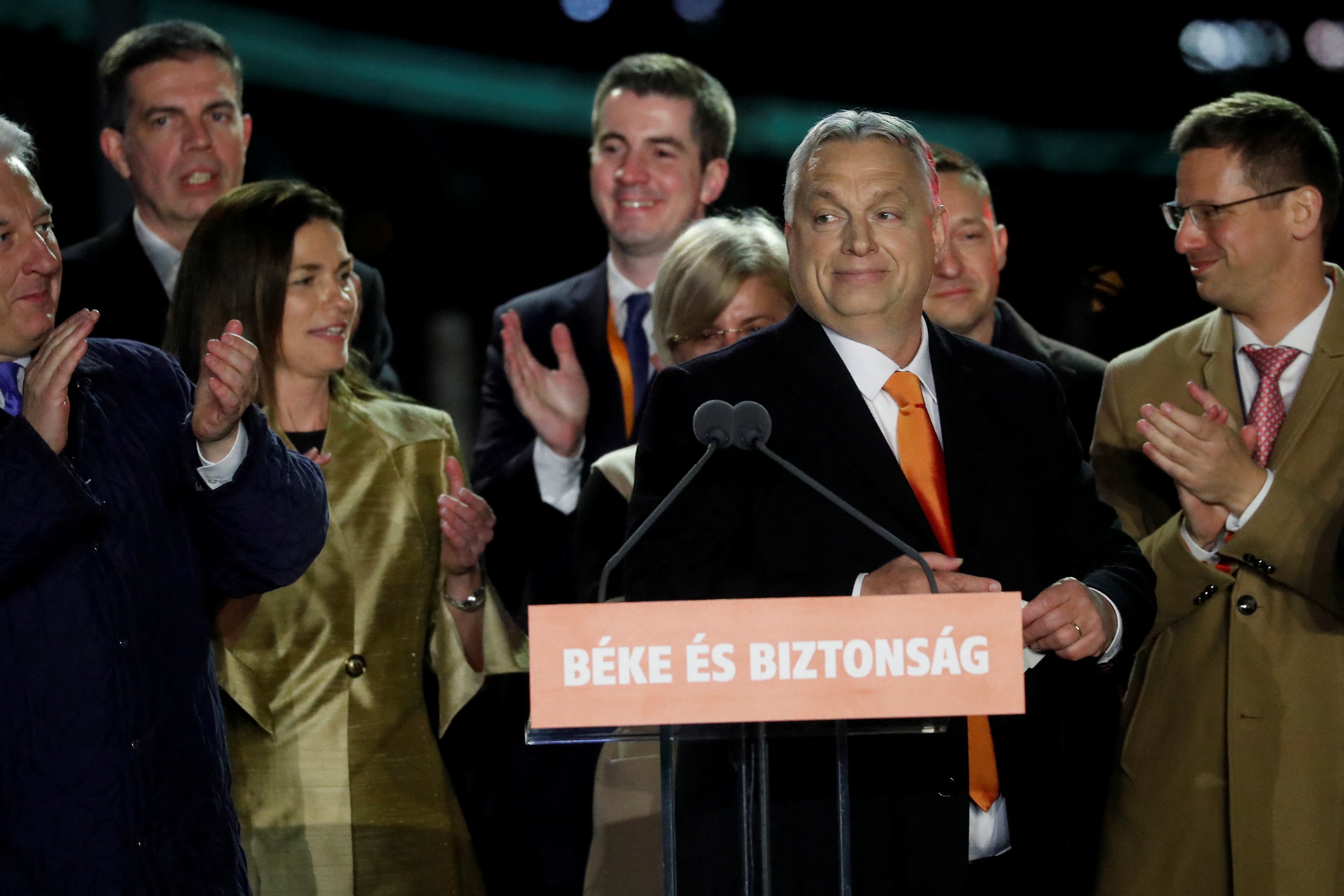 The ultra-conservative Viktor Orbán won this Sunday for the fourth consecutive time – the fifth of his career – the elections in Hungary. The opposition, which had joined as a bloc in the United for Hungary coalition as the only way to evict Orbán, ultimately crashed into reality. “Dear friends, we have had a great victory. So big that it can be seen from the moon, even from Brussels,” Orbán proclaimed.

The prime minister’s victory consolidates the illiberal regime that has been based in the last 12 years on a profoundly nationalist and Christian idea of ​​the homeland. The war in Ukraine went through the electoral campaign, but in the end it did not take its toll on one of the staunchest allies of the Russian president, Vladimir Putin, in the EU.

Around ten o’clock at night, the opposition, with long faces, already took their defeat for granted at their headquarters at the Városliget ice rink in Budapest, where the candidate for prime minister, Péter Márki-Zay, was scheduled to appear. Orbán’s party obtained 54% of the votes in the national lists, which are shared by 93 deputies, and won 88 of the 106 seats that are distributed in direct mandates from each constituency.

A resounding victory that shows that, in the case of Orbán, power does not wear him down. The mobilization fell two points compared to the 2018 elections, with a participation of 68%. Our Country also enters Parliament, a far-right force with former members of Jobbik, the party that turned from the extreme right to the center.

Orbán emerges stronger from these elections before his country and before the European Union. In his search for models to build an illiberal state, the prime minister decided to look further east, especially Russia and China, rather than the west. His voter support, even in a particularly unstable situation with a war across the border, legitimizes his trajectory at home. He will now have to consider whether he wants to rebuild the trust of his partners both in the EU and in his neighborhood, with the Visegrad Group (V4).

It remains to be seen whether the economic situation, with skyrocketing inflation, could force Orbán to seek an agreement with the Union to obtain the recovery funds that the European Commission has not yet transferred due to problems such as corruption and the deterioration of the State of right. In the final stretch of the campaign he wrote to Brussels to request them, including the loans that he had previously rejected, arguing that he needs them to deal with the large flow of refugees, although most of those who arrive in Hungary are on the way.

The biggest concern of citizens in Hungary is the cost of living, according to a study by the think tank Policy Solutions. Inflation is at its highest in 15 years, 8.3% in February, according to Reuters, and consumer confidence has fallen 11 points in March. Orbán announced a spending package before the elections that sought to cushion the loss of purchasing power. Among other measures, the Government returned practically all of the 2021 taxes to families with children and gave extra pay to pensioners. In addition, it placed price limits on basic foods and gasoline, and extended those already in place on domestic energy bills.

Those almost 5,000 million euros invested just before the elections have also contributed to the deficit skyrocketing. With growth affected by the war, some economists believe that the government’s fiscal plans are no longer realistic and that it will have to make adjustments.

Links with the Kremlin

Fidesz voters have not penalized Orbán’s ties to the Kremlin. Maria Szabo, a 72-year-old retiree, sadly recalled the communist era as she left to vote at a school on the Hill of Roses in Budapest. As she has repeated the party during the campaign, Szabo had internalized that the opposition intended to return Hungary to those years. “Orbán’s relationship with Russia is only for gas, but he has criticized Putin and says that he does not want to get into the war,” she defended.

Outside its borders, however, Russia’s aggression against Ukraine has left Orbán more isolated in the EU. Although he voted in favor of the first four rounds of sanctions, he refuses to send weapons or those of other countries through his territory. His position, which in Warsaw is seen as favorable to Putin, has cost him the distance, at least temporarily, from Poland, his great ally in the disputes against Brussels, and the rest of the V4, the Czech Republic and Slovakia.

Orbán has clashed with Brussels over issues such as the rule of law, the treatment of migrants, asylum seekers, civil society and the rights of the LGTBI collective —a referendum this Sunday also sought to legitimize the law that prohibits homosexual content in the school-. But, according to the results known this Sunday, Orbán has managed to maintain the support of his voters. “It’s disgusting how the heads of the EU attack him,” protested the retired Szabo.

OSCE and Vox observers in a polarized country

On the Pest bank of the Danube, neither the snow nor the cold this Sunday morning stopped the high participation in the Hermann Ottó school, in the old neighborhood of the Jewish intelligentsia of Budapest. The center was abuzz with voters, the vast majority of them opposition. Observers from the Organization for Cooperation and Security in Europe (OSCE), which has a mission of more than 300 people who examined the cleanliness of the elections, also passed by. They almost crossed paths with the international counter-mission led by the ultra-conservative Poles of Ordo Iuris. Juan José Liarte Pedreño, spokesperson for Vox in the Murcia Assembly, and Álvaro Berrocal, coordinator of the parliamentary group, were in charge of passing by. From everything they had seen and heard, they claimed not to have perceived any irregularity.

Hungary is deeply polarized. Opposition voters see the country and its democratic institutions as adrift. “What is happening here is morally unjustifiable,” said Blanca Kover, a math student who had just won her right to vote. Gabor Balint, a 34-year-old programmer, considers Hungary’s position regarding “the war, the collapse of the rule of law and the enrichment of friends of the Government with public money” “a shame”.

Some voices from the opposition coalition anticipate that the process of assigning blame for the defeat will begin soon. It seems complicated that parties as disparate as Jobbik, formerly of the extreme right, the Social Democrats of the DK or the Greens and Liberals, manage to work together over the next four years. They saw close the possibility of a change, but everything indicates that Hungary has decided that everything remains the same.

Bombings against the soul: the mourning of those displaced by the war in Ukraine | International

The great replacement, a lethal conspiracy theory with a French denomination of origin | International

Check Also
Close
A serial killer is on the loose in peaceful Moscow, Idaho | International
6 mins ago

Presidential elections: The ghost of the assassination haunts Colombia
May 9, 2022

Presidential elections: The ghost of the assassination haunts Colombia

The new Swedish government sets its conservative agenda: less investment in climate and cooperation and more aid for cars | International
3 weeks ago

The new Swedish government sets its conservative agenda: less investment in climate and cooperation and more aid for cars | International

From hope to fear: Europe during the reign of Elizabeth II | International
September 11, 2022

From hope to fear: Europe during the reign of Elizabeth II | International