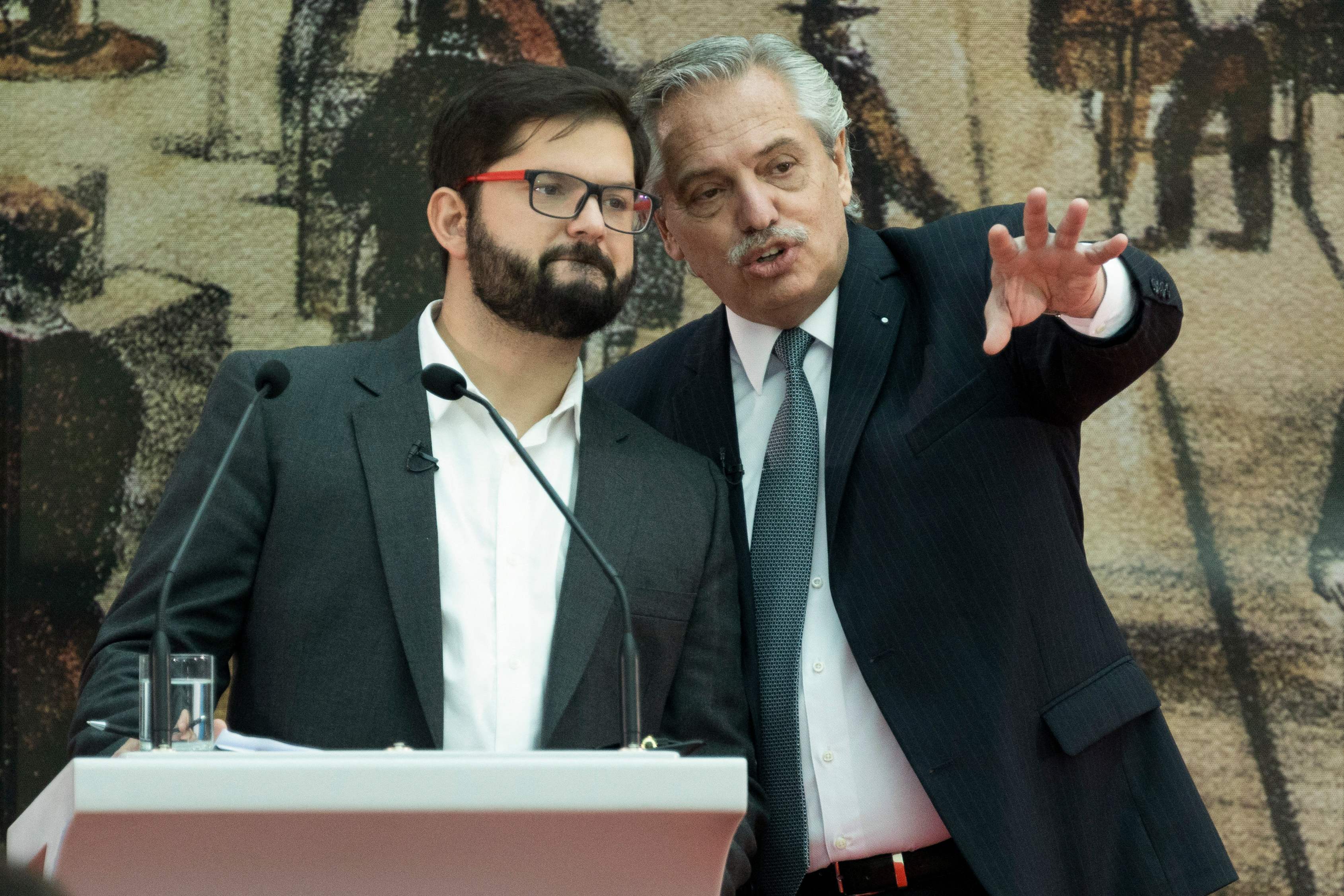 Gabriel Boric has crossed the Andes mountain range this Sunday to fulfill an old diplomatic tradition: each new president of Chile opens his international agenda with a visit to Argentina. Boric had dinner as soon as he arrived in Buenos Aires with his Argentine counterpart, Alberto Fernández, and this Monday he met with him at the Casa Rosada. The agenda is dominated by the need to repair regional relations. The Chilean president has been harsh in his criticism of Nicaragua, Venezuela and Cuba related to Human Rights and this Monday he had to respond to it. “Why do the media ask me about that and not about the human rights violations in our country, in Chile? Or for the murders of social leaders in Colombia?” Boric asked himself. “Let’s not use the suffering of the peoples -whether in the Ukraine, in Yemen, in Palestine, in Chile, in Venezuela, in Nicaragua- to take advantage of internal politics.”

Boric’s criticism of the countries of the Bolivarian axis strained his relationship with the parties to the left of Approve Dignidad, his government alliance. Boric thus sent a message to his internal front, in this case to the Communist Party, but also in Argentina, where there are hard sectors of Kirchnerism that publicly defend the management of Nicolás Maduro or refuse to repudiate the Russian invasion of Ukraine. “Human rights must be fully respected and the State must promote them fully in all parts of the world, regardless of the political color of the Government that violates them,” said Boric, and promised “a single line” in politics Exterior.

Since his arrival at La Moneda on March 11, Boric has promoted the construction of “a single voice for Latin America.” This represents a subtle shift in Chilean foreign policy, focused on the commercial axis made up of the countries of the Pacific alliance (Peru, Colombia and Mexico, in addition to Chile). The good harmony between Boric and Fernández is evident, and the Chilean has already announced that he will feel very comfortable if Lula da Silva wins the general elections in Brazil this year. “Here you have an ally, an accomplice in this battle against inequality and a more dignified world. We will continue to meet,” Boric told Alberto Fernández. The Argentine returned the compliment: “You have a friend to help you in everything that is within my reach. A friend, and an accomplice to modernize everything that needs to be modernized with equality”. Boric declares himself a lover of Argentine rock and Fernández gave him Artaudan album by the late Luis Alberto Spinetta, “which he had treasured since the seventies” in his personal discotheque, said the Argentine.

During the meeting, both presidents closed a diplomatic controversy related to the wallmapu, the ancestral territory that the Mapuche claim as their own. Days ago, the Minister of the Interior, Izkia Siches, used the term without taking into account that it covers a good part of Argentine Patagonia. “None of us here questioned the territorial sovereignty of our countries,” Boric said. For Fernández, it was a “clarified” matter that “did not generate any concern” in the Argentine Executive.

Boric traveled to Argentina with five ministers, the presidents of both houses of the Chilean Congress and a group of businessmen. With Fernández he signed cooperation agreements on issues of gender equality, minority rights, consular affairs and relations with the development of memory spaces in both countries. For Argentina, a point that was left on hold for now is especially relevant: the bilateral energy agenda. The gas bill that the Casa Rosada pays each year to cover its deficit in gas supply has skyrocketed after the Russian invasion of Ukraine, and for this reason it has had to look for less onerous political alternatives. Chile is one of them. Boric traveled accompanied by his Minister of Energy, Claudio Huepe Minoletti. “Our relationship in energy matters is very important, we have discussed it and I have no doubt that we will have good news there,” said Boric, without further clarification.

The Chilean president’s agenda was completed on Monday with a visit to Parliament and the Supreme Court. On Tuesday, meanwhile, he will visit the Museum of Memory that works in the former Esma, the torture center that the Navy set up in the seventies to eliminate leftist activists.

Martín Guzmán: The Argentine Minister of Economy yields to the pressure of Kirchnerism and submits his resignation

Daniel Ortega speeds up the implementation of the single party regime in Nicaragua | International
July 15, 2022

Nuclear deal: Four Arab countries close ranks for the first time in Israel in the face of Iran’s challenge | International

The British Parliament will debate this Tuesday if Boris Johnson lied about the parties in Downing Street | International
April 18, 2022

The last days of prosecutor Marcelo Pecci, murdered on the beaches of Colombia
May 11, 2022

The last days of prosecutor Marcelo Pecci, murdered on the beaches of Colombia

China will stop paying in dollars part of the gas it buys from Russia | International
September 6, 2022