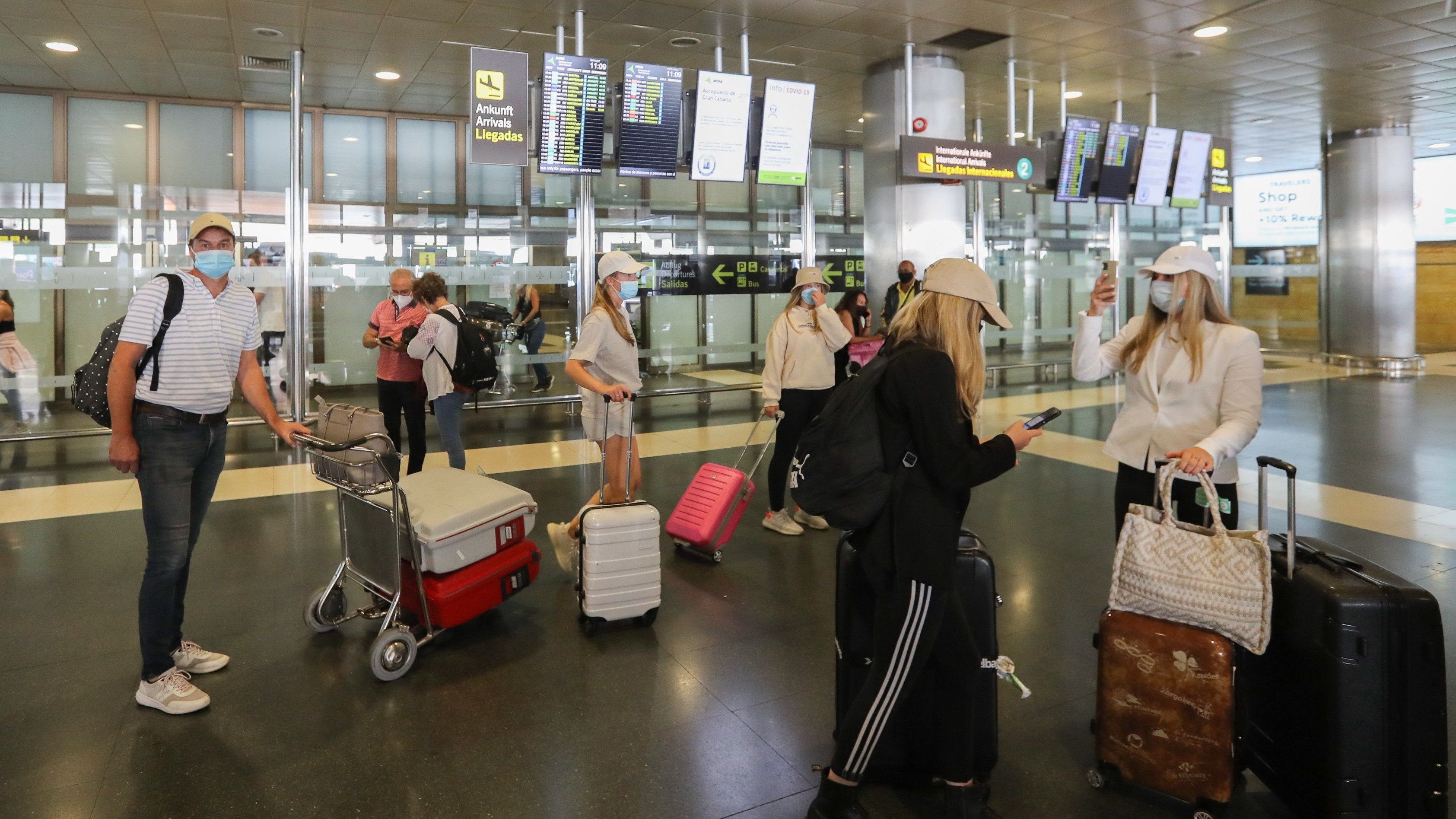 Tourism is facing a key year for its recovery, after the historic blow of the pandemic, with hotel reservations on the rise for the Easter holidays and prospects for improving business. Hotels, airlines and tour operators are currently maintaining their goal of returning to 2019 billing levels after 24 fateful months in which their weight in the economy was reduced by more than half. Cancellations remain at usual levels, far from the falls of 2020 and 2021, depending on the sector, but a certain slowdown can be seen. The forecasts are clouded by the negative effect of inflation and the war in Ukraine at a delicate moment in which half of those affected by an ERTE in Spain (in total, about 105,000) are hotel workers, travel agencies, restaurants and airlines.

The 11 hotels of the Valencian businessman Toni Mayor, owner of Port Hotels, are open, except for one for renovations, and he already has 80% of the beds sold for Easter. “If we also have a strong last hour, it will be a very good few days for us,” he explains by phone. “The year 2020 was horrible, with everything closed, the year 2021 saved us national tourism and now the big difference is that there is British tourism again thanks to the fact that the restrictions of the past no longer exist,” he summarizes. His establishments, spread over Benidorm, Valencia, Elche, Denia and Calpe, employ around 500 people. The businessman compensates for his optimism, which even leads him to downplay the strong impact that the rise in energy costs is having on the business, with a not insignificant fear: “If the war in Ukraine continues… we will see how it evolves everything”.

The end of the armed conflict would probably lead to a reduction in oil and gas prices, the main cause behind the rise in inflation, which not only raises business costs, but also reduces the purchasing power of tourists. Entrepreneurs in the sector are cautious. “We are moving towards the recovery of tourism, but new threats are looming over the sector,” explains Jorge Marichal, president of the Spanish Confederation of Hotels and Tourist Accommodation (CEHAT). “Today we are presented with a complicated scenario again,” he says. “The increase in operational and energy costs continue to put the viability of companies and employment at risk,” he adds.

The forecasts, for now, are encouraging and indicate a recovery in international tourism, key for the sector and which last year failed to recover due to the persistence of restrictions. The Ministry of Industry, Commerce and Tourism forecasts that the arrival of tourists to Spain in April will reach 80% of the pre-pandemic level. Meanwhile, advance bookings for international arrivals for Easter (between April 8 and 18) have improved and are already only 13% lower than 2019 figures, according to data from the analysis firm ForwardKeys.

As for hotel reservations as a whole, the Dingus DataHotel tool, which analyzes data from 1,300 hotels in 25 countries, has registered an increase of 307% for this Holy Week compared to last year, they have grown by 307%. The percentage of cancellations in the entire Spanish group remains at “usual levels” and marks 27%, according to this firm. The public company Paradores, for example, has just announced that it expects occupancy in April to grow by 10% compared to 2019. At Easter, it forecasts an occupancy rate of 75%, compared to 73% in the same period in the previous year to the pandemic.

The agency on-line Destinia points out that significant progress has been seen in the last three weeks, although the total number of reservations that have entered its system is 28% below the same dates in 2019. “At the beginning of the year we were convinced that 2022 It would be a record year for tourism worldwide. With the current inflationary context and the war in Ukraine, it is very difficult to make forecasts, but the reality is that demand remains consistent in general terms,” ​​says Ricardo Fernández, general director of the company. “If fuel prices don’t skyrocket in the next three months and inflation stays in single digits, we could still be talking about an excellent summer as an industry and, specifically, for Spain as a destination,” he says.

The year started well, with the sixth wave over and the increasingly real expectation that the pandemic is coming to an end. After two very tough years, in which the sector reduced its weight in GDP from 12.3% in 2019 to 5.5% in 2020 and only managed to go back to 7.4% in 2021, this year is key to consolidate the recovery that began to be noticed last summer, when the vaccination campaigns made it possible to re-establish a good part of mobility. José Luis Zoreda, Executive Vice President of Exceltur, a thinktank which represents 32 of the most important companies in the tourism sector (such as Iberia, Meliá, Riu or Amadeus), recalls that ómicron already assumed “a stick” in December, but at least it was not high season. “Now, when the sector was beginning to take its lead, the war in Ukraine could complicate the picture,” he warns.

The health fear that broke out in 2020 may be replaced by the fear of the lack of security due to the conflict, especially when traveling to countries closer to the area, such as Germany, Greece and Turkey. At the moment, the sector does not appreciate that these fears are affecting the Spanish market, according to Zoreda.

The problem is that any bump in the road now comes at a delicate time. The years 2020 and 2021 were “catastrophic” years for the industry, according to CEHAT: almost 100,000 businesses were closed and turnover fell between 50% and 80%. Last year, hotel demand grew by 87%, but the sector is 50% below pre-pandemic data. In addition, many businesses are weighed down by debt and have to start repaying the credits granted by the Official Credit Institute (ICO) to deal with the deep crisis in which the sector fell.

Agencies, the most affected

The recovery of tourism is being very uneven. Travel agencies are one of the businesses most affected by the pandemic and the one that is having the hardest time getting up again, with around 10,000 employees (30% of the total) still in an ERTE situation. “When the pandemic started we were in the first car, we were the first to be affected by the restrictions on international travel, already in February 2020; and now we are in the back car, because we are the ones who have the hardest time recovering, “explains Eva Blasco, owner of Europa Travel, a small family business in Valencia founded in 1977 that continues to sell trips at street level, an “agency face-to-face”, as Blasco prefers to call it. “We do not foresee full recovery until 2023, there is even talk of 2024,” she adds.

The employees of the agencies affected by a temporary labor adjustment have gone from 13,121 in October to 10,792 in January, and the large travel agencies are renegotiating these ERTEs to extend them, as is the case of Viajes El Corte Inglés, Ávoris (Globalia) and Nautalia, which shows the doubts about the recovery of the business. In contrast, the tourism sector as a whole has gone from having 116,180 employees in ERTE to 52,756, which represents a much more significant reduction. Since 2020, the agency sector has suffered a 20% job destruction.

“The pandemic has affected us more than other sectors because 75% of the activity of the agencies comes from international tourism, and even today there are restrictions in some Asian countries, or the procedures are so cumbersome that the client gives up”, explains Carlos Garrido, president of the CEAV employers’ association. In addition, business travel has been paralyzed as well.

The new Prime Minister of Britain, Sunak, made the first phone call with the leaders with Zelenskiy

Check Also
Close
Vacancy: The Peruvian military turned its back on Castillo | International
16 mins ago

By admin
Recent Posts
Latest News
Facebook Twitter WhatsApp Telegram
Back to top button
Close
Featured Posts
Last minute of the war in Ukraine, live | Zelenski: “We must defend ourselves and respond to the brutal bombings that do not stop for a day” | International
August 15, 2022

Last minute of the war in Ukraine, live | Zelenski: “We must defend ourselves and respond to the brutal bombings that do not stop for a day” | International

The extreme right in Germany promises unity and renewal at its congress, but elects the same leader | International
June 19, 2022

A fisherman confesses to killing Dom Phillips and Bruno Pereira in the Brazilian Amazon | International
June 16, 2022

A conservatism without leaders or visions | Opinion
October 23, 2022

A conservatism without leaders or visions | Opinion

Armenia asks Russia for help and denounces that Azerbaijan has invaded part of its territory | International
September 14, 2022

The DEA recruited relatives of Caro Quintero as informants to capture him
July 24, 2022