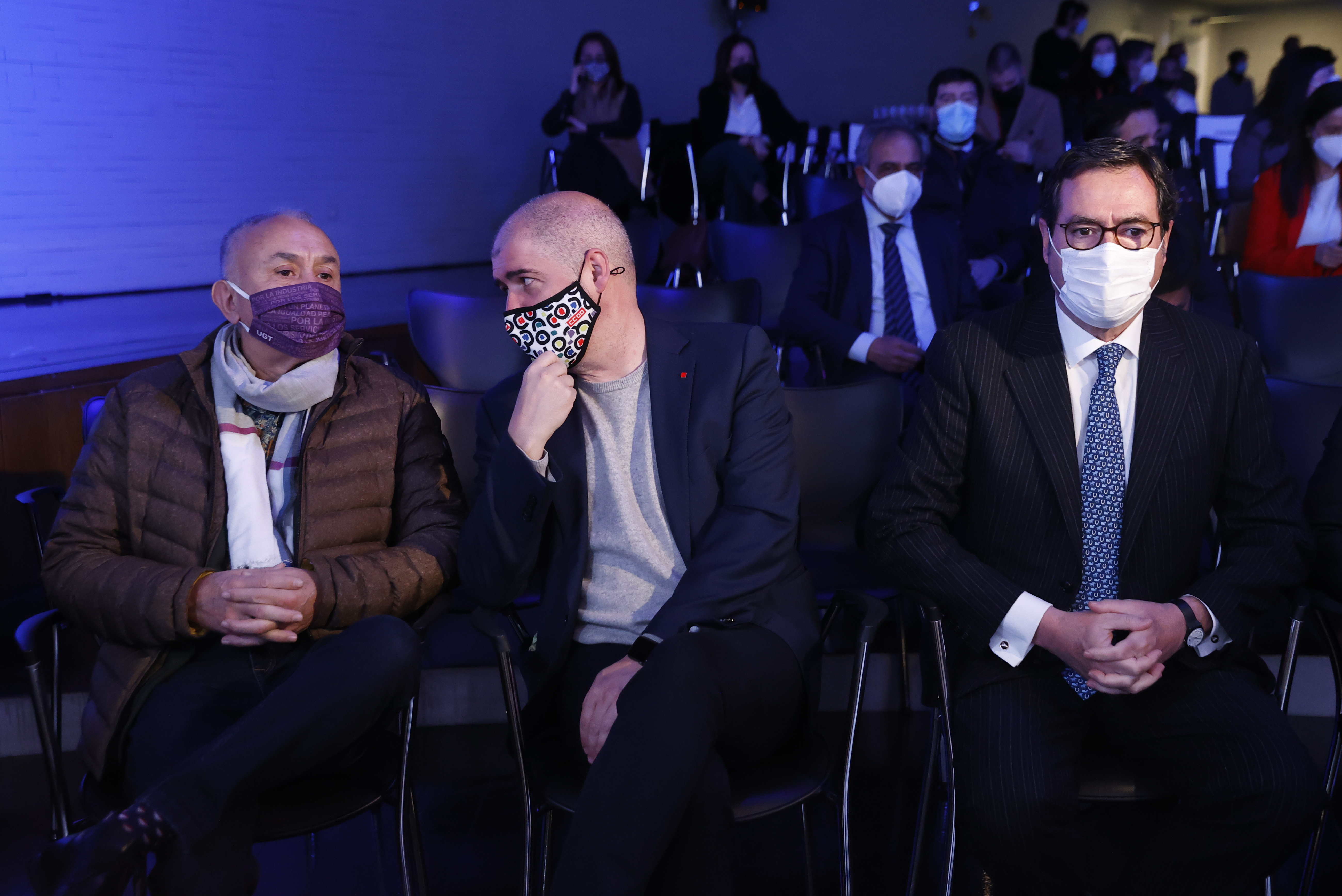 The renewal of the Agreement for Employment and Collective Bargaining (AENC) that settles unions and employers sails through icy waters and does so, moreover, in the middle of a key week. After several crossroads of statements that have cooled the relationship between the social agents, the general secretaries of the UGT unions, Pepe Álvarez, and CC OO, Unai Sordo, met this past Monday with the presidents of the Spanish Confederation of Business Organizations ( CEOE), Antonio Garamendi; and the employers’ association of small and medium-sized companies (Cepyme), Gerardo Cuerva, to try to speed up the pace of the talks, and trace a path of wage growth for the next three years that combats the bite of inflation on payrolls . However, during the meeting the distance that exists between both sides regarding what the percentage size of this rise should be until 2024 was again evident.

After this last meeting, short and without progress, sources familiar with the negotiation point out that the general secretaries of the different employers’ associations have been summoned by the CEOE to an internal meeting this Friday, in which the definitive position of the employers’ body will be established. . These same sources do not rule out that Garamendi raises the rejection of the agreement, and proposes only a series of recommendations, based on the forecasts of the Bank of Spain about the evolution of inflation for the coming years. The reference measure would be linked to subjacent inflation, that is, the one that does not take into account the prices of energy and the price of unprocessed food products.

In its latest projections, the supervisory body forecasts that 2022 will end with an average annual inflation of 7.5%; while for 2023 it is estimated that it will be 2%, and for 2024 1.6%. Calculations that do not convince some businessmen, who consider the projections for the next two years too optimistic, taking into account that it is difficult to predict when and how the war in Ukraine will end, and that the pandemic has not yet completely disappeared .

The last approach that the businessmen had put on the table was to define a diminishing path for the revaluation of wages for the next three years: from 2.5% in 2022; 2% in 2023, and up to 1.5% in 2024. This range could be raised by up to an additional 1%, as long as the productivity per employee and employment rates rise between 2% and 4%. To this, the unions responded by claiming increases of up to 3.5% in 2022; 3.2% in 2023 and 3% in 2024, to which a revision of the CPI would have to be added in each of the years, and the difference added. “What they have to be clear about in the CEOE is that once the agreed three-year period is over, the workers cannot have lost purchasing power,” says a union source, who warns that the establishment of a wage update clause is “a red line”. From the employers’ body they respond that article 82.3 of the Workers’ Statute allows companies to reduce wages when there are economic, technical, organizational or production causes.

The situation of the leader of the businessmen is compromised. Garamendi, whose confrontation with the Vice President and Minister of Labor, Yolanda Díaz, on account of the prohibition of dismissal for reasons related to the rise in energy prices, has damaged their personal relationship, according to various sources, has repeatedly stated that a rise in wages in line with inflation would punish companies, and would suppose the assumption as fixed of an inflationary situation that he considers circumstantial. However, if a reference framework for collective bargaining is not defined, no matter how low the agreed increase was, representatives of different business sectors have expressed their concern about the effects that the breakdown of social peace would cause, and the possibility of a succession of strikes. And on the opposite side, sectors with a greater energy dependency are pressing him so that no increase is carried out, given the uncertainty of the effects that the invasion of Ukraine by Russia, of unknown resolution, may cause.

The signing of a new AENC is key to drawing up the Income Pact that the Government wants to promote, and that the Bank of Spain itself encourages, since without it it is not possible to tackle the distribution of costs in a situation of economic difficulty such as the actual. However, the differences between unions and employers prevent it from developing for the time being. Sources familiar with the negotiation assure that despite the fact that a date for the next meeting has not been defined, the contacts will continue to take place in the coming days to try to reverse the situation.

It was admired for its natural beauty!

Is public transport free on October 28-29?

By admin
Recent Posts
Latest News
Facebook Twitter WhatsApp Telegram
Back to top button
Close
Featured Posts
War in Ukraine: The horror at the Kramatorsk station: “We saw a burned corpse inside a car and many bodies” | International
April 9, 2022

War in Ukraine: The horror at the Kramatorsk station: “We saw a burned corpse inside a car and many bodies” | International

The death of Elizabeth II, the unexpected challenge that has put the new prime minister and the leader of the opposition to the test | International
September 15, 2022

The death of Elizabeth II, the unexpected challenge that has put the new prime minister and the leader of the opposition to the test | International

The United Kingdom begins the festivities for the 70 years of Elizabeth II on the throne | International
June 2, 2022

The protest in Buenos Aires for the economic crisis, in images
August 18, 2022

The protest in Buenos Aires for the economic crisis, in images