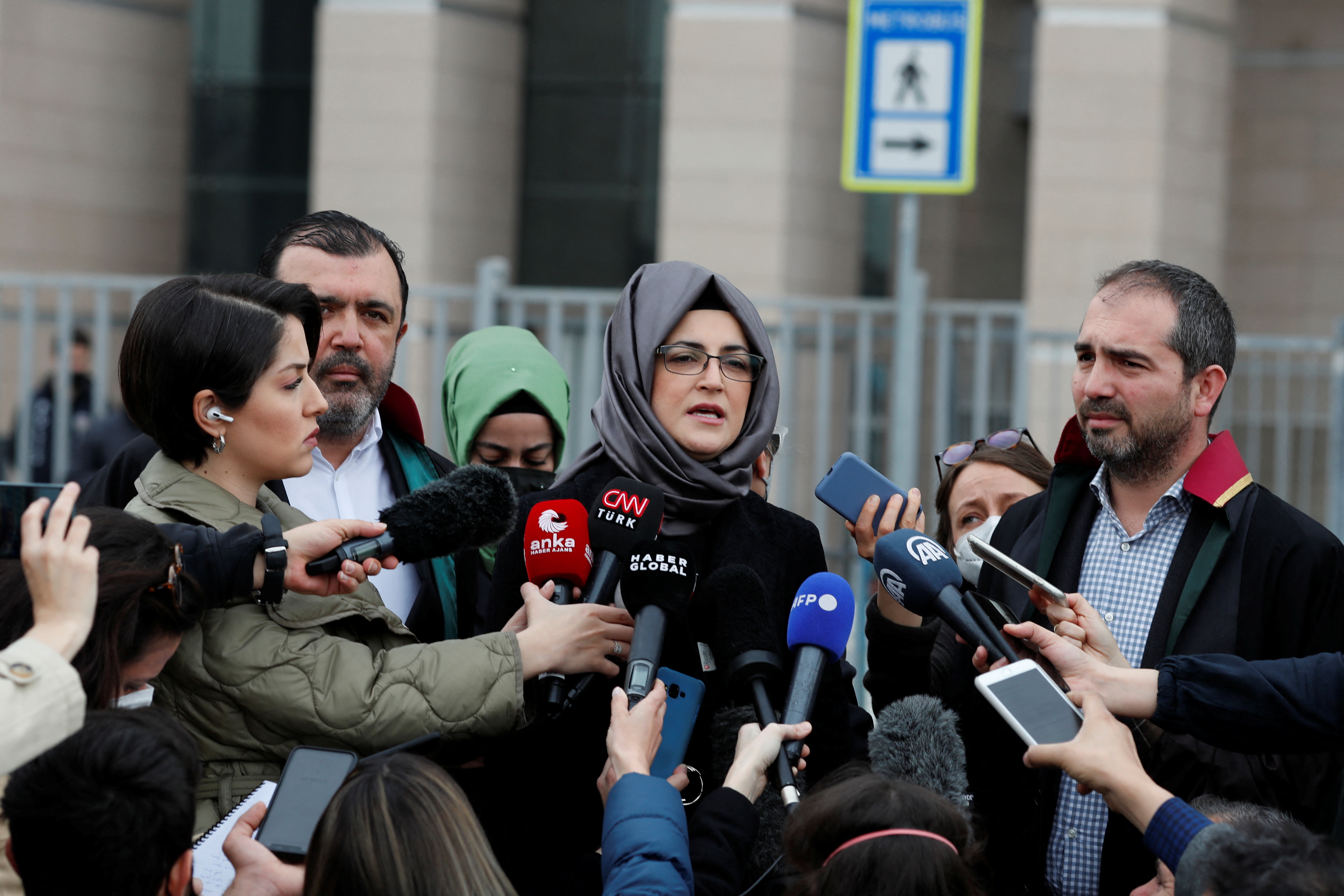 The realpolitik has ended up prevailing in the search for Justice. After almost two years of trial before an empty bench, and when three and a half years have passed since the murder and dismemberment of journalist Jamal Khashoggi in the Saudi consulate in Istanbul – in which the Ankara authorities repeated over and over again that they would not rest until the horrible crime is clarified—, Turkey has ended up throwing in the towel and accepting Saudi Arabia’s demands. The judicial process has been suspended in Turkish territory and will be transferred to a Saudi court. The way is thus opened for the normalization of relations between Ankara and Riyadh, the culmination of which will be a possible visit by the Turkish president, Recep Tayyip Erdogan, to the Saudi monarchy.

This Thursday, the Istanbul court that judged the case decided to accept the prosecutor’s demand to suspend the process and transfer it to Saudi Arabia. On March 31, during one of the hearings of the process, the Prosecutor’s Office —very controlled by the Turkish Executive after the latest legal and constitutional reforms— had made this request to the court alleging that, in the absence of the defendants, the trial could not reach a conclusion. The court decided to ask the Ministry of Justice for advice and, a few days later, it responded that it saw the Prosecutor’s request as “appropriate”, given that “the authorities of Saudi Arabia have not approved the demand” for the extradition of the suspects.

“This system, in which material interests are put above, will end up exploding. Because it goes against human nature,” Khashoggi’s fiancée, the Turkish academic Hatice Cengiz, tweeted on the 31st, upon learning of the prosecutor’s request. On the day of Khashoggi’s disappearance, Cengiz waited in vain for hours for her partner in front of the Saudi consulate, where she had gone to her for some papers necessary for the celebration of their planned marriage. “My fight for justice for Jamal is not over. The courts may have decided to ignore the truth about the case, but I will not stand or remain silent. We all know who is guilty of Jamal’s murder, and now it is more important than ever that it continue. [mi lucha]”, he wrote this Thursday on the social network.

In total, there were twenty defendants in the Turkish court case, fifteen of whom were part of the team sent from Riyadh to assassinate Khashoggi and make his body disappear, which has not yet been found – it is believed that it was cremated in a high-speed furnace. power in the garden of the Saudi consul’s residence—and the rest were members of the Saudi consular legation in Istanbul and high-ranking officials of the regime accused of planning the crime, such as Saud al Qahtani, head of the media area of ​​the Saudi court and close collaborator of the crown prince, Mohamed Bin Salman (MBS), and Ahmed al Asiri, deputy head of the secret services. For all of them, the same Turkish Prosecutor’s Office that is now disregarding the case asked for life imprisonment at the beginning of the process.

Riyadh refused extradition, alleging that it had already judged the culprits in 2019. In December of that year, it announced that five defendants had been sentenced to death and another three to different prison terms, although, as a sign of the opacity of the process, neither He did not even report the identity of the condemned. It was known that Al Qahtani had been exonerated. It later emerged that one of Khashoggi’s sons had “pardoned” those on death row, whose sentences were commuted to prison, although an investigation by Guardian revealed last year that at least three of them live and work in “luxury housing” under the protection of the Saudi state.

“Transferring the Khashoggi case from Turkey to Saudi Arabia will end any chance of bringing him justice and reinforce the Saudi authorities’ belief that they can get away with murder,” said Michael Page, deputy Middle East director at Human Rights Watch.

“By transferring the Khashoggi murder case to Saudi Arabia, Turkey decides to return it to those who are responsible for it. It is a guarantee that injustice and impunity will prevail,” criticized the secretary general of Amnesty International, Agnes Callamard, who investigated the case in her previous position as UN special rapporteur on extrajudicial executions and received threats from Saudi Arabia for it. Callamard’s report, as well as one from US espionage, accuses Saudi Arabia’s crown prince and strongman MBS of having instigated the crime against Khashoggi, who had risen from a well-positioned man in the Saudi royal court to a critic of it in exile.

Khashoggi’s murder led to a virtual rupture in relations between Saudi Arabia and Turkey, already strained by the conflicting positions of both countries in various regional conflicts. In Syria, while Riyadh sought reconciliation with Bashar al-Assad’s regime, Ankara has continued to support the rebels; in Libya, the Turks have supported the Tripoli government and the Saudis, together with the United Arab Emirates, Egypt and Russia, the eastern warlord Khalifa Haftar; In the Eastern Mediterranean, the Wahhabi monarchy has joined forces with the French, Egyptians, Emiratis and Israelis to defend Greece and Cyprus against what is considered Turkey’s “expansionist policy”. And, above all, Riyadh was deeply annoyed that Turkey, with the establishment of an air bridge, saved itself from the blockade that, with its partners in the Gulf Cooperation Council, imposed on Qatar for what they considered an approximation of the Doha government to Iran.

However, in recent months, Ankara has turned its foreign policy towards a more pragmatic stance, given the evidence that it was becoming isolated in the region. Thus, ties with Israel and the Emirates have been restored and negotiating tables have been established with Greece, Egypt and even Armenia. The main reason for this change in position is the delicate economic situation in which Turkey finds itself, which could jeopardize Erdogan’s re-election next year.

Riyadh, for example, decreed an unofficial boycott of Turkish products that has caused Turkey’s exports to the Saudi monarchy to fall by 92% between 2019 and 2021, to an almost insignificant 265 million dollars. This year, the figures have begun to pick up slightly and, in March, Turkey sold products worth 50 million dollars to Saudi Arabia, more than in the previous two months combined, which would be proof that trade is recovering progressively. “The decision to transfer the Khashoggi case to Saudi Arabia means that, in practice, the Turkish authorities close the process against MBS [el príncipe heredero saudí]. It is a big concession, a peace offer from Erdogan. Erdogan is expected to travel to Saudi Arabia during Ramadan and I think he will be rewarded with a large Saudi funding program for Turkey,” financial analyst Timothy Ash opines in an emailed comment.

Turkey is having trouble financing its current account deficit, which is growing on rising energy prices. The war in Ukraine may cause the loss of 27% of its tourism (which is accounted for by Russians and Ukrainians) and thus reduce one of its main sources of foreign exchange income. In addition, it has burned through its central bank’s foreign currency reserves to try to keep the lira afloat, as Erdogan refuses to raise benchmark interest rates. Therefore, the Turkish monetary institution is resorting to exchange programs (swap) with central banks of other countries. Of the 28,000 million dollars (in the equivalent in other currencies) that they have lent to the Central Bank of Turkey, more than half (15,000 million), come from Qatar. The rest, from other countries such as China or the Emirates. Ash believes that Riyadh could now offer Turkey an amount similar to that of the Qataris.

War crimes in Ukraine: the Spanish police and forensic mission will track down videos, photos and traces | International

FILBO 2022: Elísabet Benavent: “I don’t care much about the pat on the back from the literary critic” | International

Russian oligarchs want to be Portuguese like Abramovich | International
July 20, 2022

Russian oligarchs want to be Portuguese like Abramovich | International

Diego Molano: The Colombian Minister of Defense defends the Putumayo operation although he acknowledges an “inaccuracy” about those captured | International
April 27, 2022

Diego Molano: The Colombian Minister of Defense defends the Putumayo operation although he acknowledges an “inaccuracy” about those captured | International

The feminist government of Gabriel Boric

The border is complicated for Biden with the end of Title 42, the measure that allows expelling migrants on the fly | International
2 weeks ago

The border is complicated for Biden with the end of Title 42, the measure that allows expelling migrants on the fly | International

The arrival of Carlos III tests the commitment of Scottish independence with the Monarchy | International
September 12, 2022