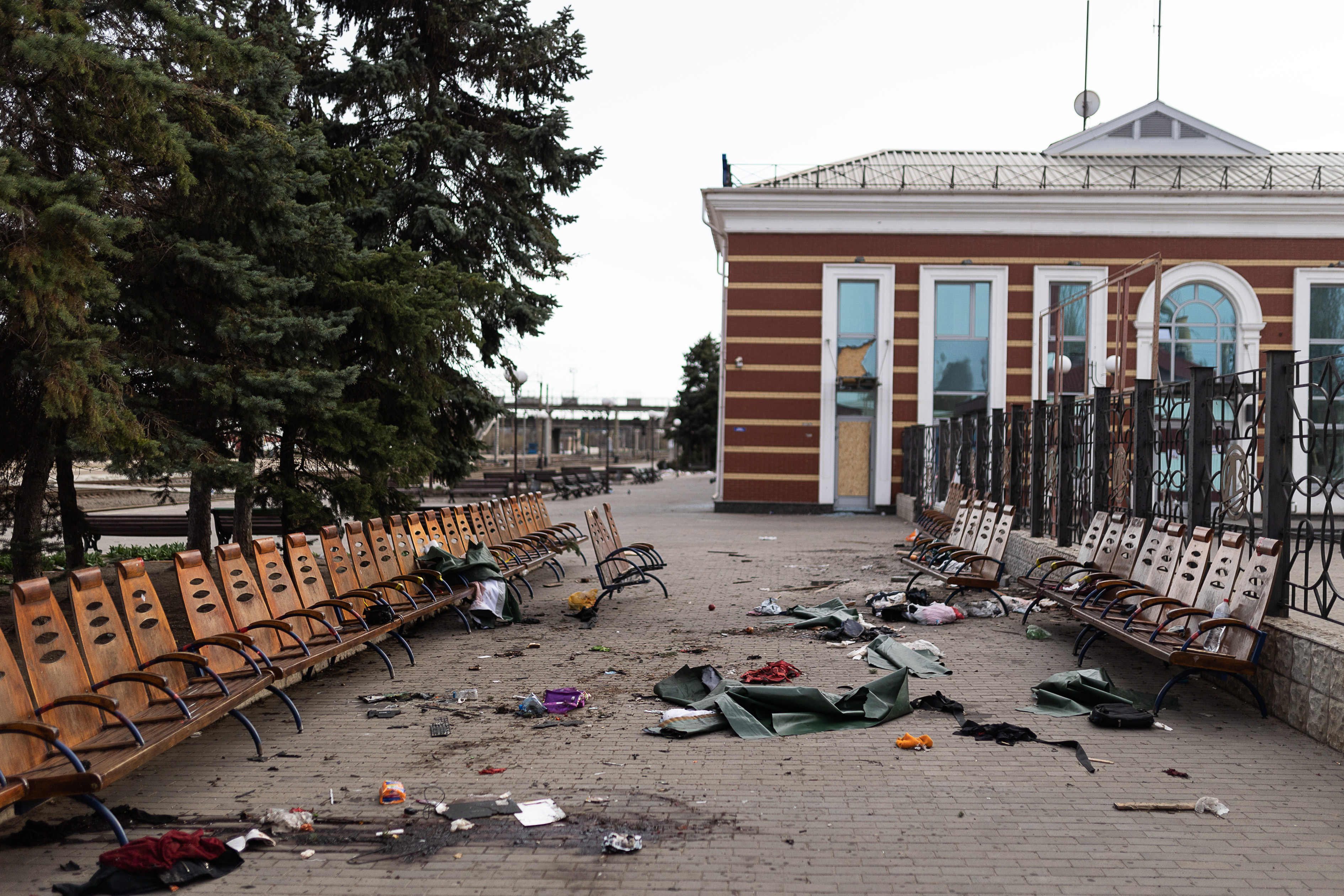 The Kramatorsk City Council, in Ukraine’s eastern Donetsk province, on Wednesday asked its citizens to leave the city. After the massacre caused two days later by a Russian missile launched on the train station from which the civilian population was fleeing, the municipality is today a ghost town, a place with practically no inhabitants. The offensive that Russia is preparing to completely occupy neighboring Donetsk and Lugansk – in the Donbas region – could be hell, says Irina P., a member of a Ukrainian Army unit specializing in ambushes against armored vehicles. “We know what’s coming our way, and we’re prepared for it.” A warning of what is coming upon them is that attack that on Friday caused at least 52 deaths and more than 100 wounded.

Kramatorsk is the main Ukrainian stronghold in the Donetsk province. It is surrounded by areas controlled by Russia and its local separatist allies. Controlling this municipality would mean dominating de facto the province entirely. When the Russian Ministry of Defense announced at the end of March that it was withdrawing from kyiv to concentrate its military efforts in the east of the country, the population that had not yet left their homes did so in a race against the clock. The carnage at the Kramatorsk station, where a cluster munition missile fell, according to the official Ukrainian version, is due to the fact that in the immediate vicinity of the station, according to the mayor, Oleg Honcharenko, there were 4,000 people waiting to leave for the west .

Most of the wounded were transported the same Friday to Dnipro, a large metropolis on the banks of the Dnieper River and four hours by road from Kramatorsk. Little of the trail of death left by the attack remained the day after: a maroon neckerchief abandoned in the grass, a bloody military stretcher, a teddy bear, and a bouquet of flowers leaning against a lamppost.

Irina P., the expert officer in handling anti-tank weapons, believes that more than 90% of its inhabitants have fled. Irina attended EL PAÍS when she was waiting on Saturday afternoon at a closed gas station, near her base, for some acquaintances to bring her a bag with hygiene products bought outside the city. The queue of vehicles leaving the Donetsk area on Saturday was reminiscent of that of the first weeks of the war, when the vast majority of the nearly 11 million displaced by the conflict were counted. The convoys saturated the secondary roads, far from the front and the areas controlled by Russia. The monotonous horizon of the agricultural landscapes through which the last families to leave the province paraded was broken by the columns of smoke caused by the impacts of the artillery.

Friday’s missiles missed the station building, preventing an even worse carnage. The casing of one of the projectiles was kept a day later on a lawn, under an advertisement for a water boiler company. The remains of the rocket were left at the site as a reminder of the horror, as well as an object to be photographed by the international media that traveled to Kramatorsk. The weapon, a Toshka-U rocket, has on one side the message in Russian painted in white letters: “For our children.” Russia accuses Ukraine of having fired this projectile, a model that stands out for its poor accuracy, and reiterates that it is not among its arsenal.

Irina P. has been in Kramatorsk for four years. The city has been a hot spot in the clash between the Ukrainian government and the pro-Russian separatists in Donbas since the armed uprising that Russia sponsored in 2014. The war had remained frozen, without much progress, until Vladimir Putin ordered the invasion of Ukraine on 24 February. Irina P is 48 years old and has a son far from the front. In these years she has seen how the population of Kramatorsk, of 165,000 inhabitants in 2013, was progressively reducing, until on Wednesday a definitive mass exit began: “Perhaps only 5% of the residents have remained.”

Vera Dubrovska and Aleksandr walked their chihuahua around the station on Saturday. Its presence was as unusual as the remains of the missile in their gardens. They took advantage of the last hour before curfew, at seven in the evening, to take their pet for a walk around the city, now an urban setting ready to film a post-apocalyptic movie; the difference is that here the fire will be real. Vera thinks so. She stutters from nerves; her house overlooks the station square. She resides in a four-story building, with a facade painted in cream pink and white colors, from which she and her husband Aleksandr were able to observe the procession of ambulances and volunteers who transferred the wounded and corpses to regional hospitals.

Viktor Surochan arrived Saturday morning from Severodonetsk, near the Russian border, ready to transport refugees to the safer western provinces of the country. He parked the minibus owned by his company in front of the station, but found that there was no one left. On the way he had crossed a column of 40 buses taking out of the city those who had been blocked by the interruption of rail transport. Surochan took pictures of the burned-out vehicles and missile fuselage to share with his friends in his hometown. The emotional impact caused by the Kramatorsk deaths was felt throughout Ukraine, with scenes of panic at train stations in multiple cities when alarms sounded of a possible air attack.

Vera and Aleksandr do not want to leave their house, despite the fear they admit they feel, not even for their two children. They will not even leave Kramatorsk when what they believe is inevitable takes place: the taking of the city street by street. They don’t know how they will survive, they just want to stay on their land. In Donbas there are also citizens who are supporters of the Russian positions. Asked about her opinion on the invasion of Ukraine, Dubrovska says that her only position is that she prays for the war to end as soon as possible.

Only police patrols, military vehicles and units of the Territorial Defense Service circulate on the avenues of Kramatorsk. Some lonely man wanders through the urban center. This is the case of Aleksander Andreyev, an employee of a metallurgical company. His family left the municipality on Wednesday because he closed the store where his wife worked as a clerk. The City Council requested it: commercial life should cease.

Andreyev stayed behind to take care of the house. He came and went through the center, according to him to do a little exercise and disconnect for a few minutes from the obsession he has, like many others in Ukraine, of compulsively looking at the information that appears about the war in the Telegram accounts that he follows . His only wish, he says, was for the war to end as soon as possible. Regarding the Russian attack on the station, he says he has not seen anything.

The chimneys of Kramatorsk and the mountains of coal mines in its demarcation have long since ceased to function. In other provinces, those far from the front, the industry is recovering activity as much as possible. In Ukrainian-controlled Donetsk, only a few tractors dared to go fishing on Saturday. Many grandmothers in the hamlets that the access road to Kramatorsk crosses sat on the shoulder to watch the caravan of vehicles that had yet to flee. Only a few citizens and the Ukrainian troops remained in the city. 50 kilometers to the north and east, the Russian positions were reinforcing to attempt the assault on the largest Ukrainian stronghold in Donetsk.

The end of the bullfighting in France? The fight reaches the National Assembly | International

The women of Malvinas wage their own war against oblivion | International

Armando Cavalieri: Nobody stops the ninth re-election of an eternal Argentine trade unionist

By admin
Recent Posts
Latest News
Facebook Twitter WhatsApp Telegram
Back to top button
Close
Featured Posts
The Conservative Party toughens the rules of the primaries to speed up the replacement of Boris Johnson | International
July 11, 2022

China: Not everyone loves Xi Jinping, the most powerful man on the planet | International
October 9, 2022

China: Not everyone loves Xi Jinping, the most powerful man on the planet | International

Debate Le Pen – Macron: Lie to me, tell me you love me | International

War in Ukraine: The videos that show that Russia is lying about the Bucha massacre | Videos
April 6, 2022

War in Ukraine: The videos that show that Russia is lying about the Bucha massacre | Videos

In the Châteaudun market little is said about the presidential elections in France | International
April 8, 2022