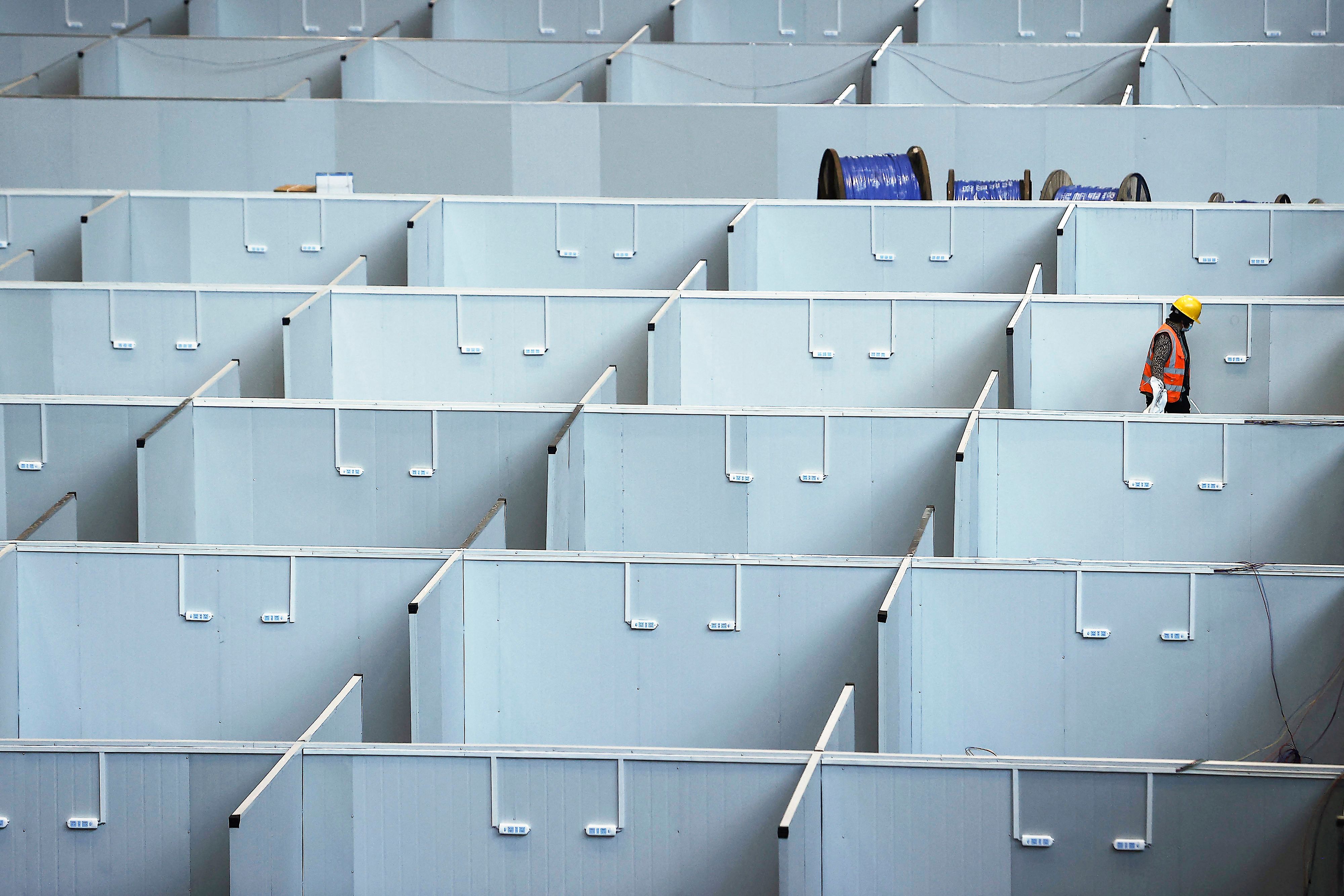 Just a few dozen young people swarmed around Houhai Lake on Saturday night, which with its karaoke for all tastes is usually one of the most crowded entertainment areas in Beijing. A couple of kilometers away, the spicy crayfish restaurants of the nicknamed street of ghostsanother popular meeting point, were only running at half throttle, something unusual on a long weekend in China.

The fear of the new wave of covid is evident throughout China. Almost 200 million people remain under some form of confinement, including the 26 million inhabitants of Shanghai – the financial capital – in absolute isolation. The country chained more than 24,000 daily cases of covid last Friday, an insignificant figure compared to what has been experienced in other nations or its total population, but which in the second largest economy in the world is the largest since the pandemic began. And the indications are increasing that the strict measures to control the new wave are creating a negative impact on the economy of the second world power, which accumulates 18% of the world’s GDP.

“The world is returning to normality (around covid) and China is beginning the crisis, possibly with a delay of two years compared to what other countries suffered,” says Joerg Wüttke, president of the European Chamber of Commerce in the giant. Asian. Throughout March, the omicron variant has forced confinement to be imposed in key cities for the national economy such as Shenzhen -the technological capital-, Dongguan -a manufacturing center-, Changchun, Jilin or Tangshan, the center of steel production, in addition to Shanghai itself.

The country is the last of the major economies to maintain a rigid “dynamic zero covid” strategy, which includes among its measures a near total border closure, massive coronavirus testing and centralized quarantines for positive cases and their contacts. And the European Chamber of Commerce warns that such measures make the daily operations of its companies “unpredictable and unplanned.” A survey by the US Chamber found last week that 54% of those who answered have cut their income projections for this year due to the wave of covid. More than 80% of manufacturers said they have reduced or slowed down production and experienced problems in their supply chains.

Foreign businessmen are not the only ones to express concern about the impact of the new wave. At its weekly meeting, the State Council – the Chinese government, which has set a growth target for this year of around 5.5% – declared this Wednesday that “the recent covid outbreaks have increased the difficulties for entities of the market, and the negative pressures on the economy grow”.

The confinements have affected the operation of the factories, which, faced with the threat of having to stop their work if they are found positive in their facilities, have in many cases adopted the “bubble mode”, in which volunteer workers stay for days, or weeks, without abandoning the plants. The measures also affect distribution and logistics systems: trucks are prevented from accessing isolated locations, and must undergo strict controls to reach those that are not. A single infected person can affect the entire workforce in a factory. A case in a port can force to stop operations to disinfect the area.

Consumer confidence also seems to have been affected: tourism trips during this week’s long weekend only reached 75 million, almost a third less than last year. Box office revenue falls. Car sales have fallen back compared to 2021. And housing sales have plummeted, a sector that continues to have problems since the crisis in the second half of last year: transactions in the thirty main cities of the country have been at the same level as those of 2020, in the midst of a pandemic.

Unprecedented decline in the service sector

The latest sign of a slowing economy came on Wednesday. The purchasing manager index (PMI) for the services sector published by Caixin magazine indicated the greatest contraction in activity since 2020, in the midst of the first wave of the pandemic, falling from 50.2 points in February to 42 in March ( in this index, records below 50 indicate a contraction in economic activity). An “unprecedented” bump, says Wüttke. The general PMI index also fell from 50.1 points in February to 43.9 in March. The manufacturing sector was relatively better off: its decrease was 2.3 units, to go from 50.4 to 48.1.

The ING bank calculates that if the confinement measures continue during April, Shanghai could lose 6% of its GDP. This represents a decline of 2% of GDP for all of China. The financial institution has revised downwards its growth forecasts for the country in the second quarter of the year, from 5% to 4%, and for all of 2022 from 4.8% to 4.6%.

For its part, the French investment bank Natixis calculated a reduction of up to 1.8% of GDP. “Achieving the 5.5% target faces growing difficulties as China’s GDP will come under greater pressure than anticipated in the first quarter and further uncertainties are likely to emerge in coming quarters,” a note at the start of the Shanghai lockdown read. “As if this wasn’t enough, the external climate has deteriorated, something that was probably not fully considered when calculating the annual target.”

While waiting for the figures on growth in the first quarter to be published on Wednesday, on Wednesday, the Council of State has already approved a series of measures to support the SMEs most affected by the measures against covid, from the suspension of compulsory payments to Social Security for companies in sectors such as restaurants, tourism or retail sales, to an increase in financial support for companies that maintain their workforce.

But, according to the consulting firm Trivium, these measures “are not going to be enough to get the economy back on track. If the authorities want to reach their ambitious target of 5.5% growth, they may have to open the doors to stimulus.

Something in which the ING analysts agree, who calculate that Beijing will approve stimuli and other aid around “1 or 1.5% of GDP”. “Measures by the central government such as cuts in taxes on exports are urgent,” point out these experts, who also predict cuts in interest rates “perhaps even this month.”

And to win back consumer confidence — and keep them coming back to Houhai karaoke bars and Ghost Street restaurants — Wüttke recommends putting more emphasis on vaccinations, especially among those over 70, where barely half count. with the full guideline, and in education about the disease. “In China, covid is still thought to be like the plague,” he says. I think the Chinese authorities need to focus a little more on education, to remove fear and make people more comfortable living under this kind of uncertainty.”

Naturgy increases its profit by 37% from January to September, to 1,061 million | Economy

With which treaty was the Caucasus Front closed?

By admin
Recent Posts
Latest News
Facebook Twitter WhatsApp Telegram
Back to top button
Close
Featured Posts
The legislative elections in the US will measure the support for union mobilization in two States | International
October 28, 2022

Biden goes to vote and maintains that those who deny the electoral results generate violence | International
October 30, 2022

The EU is confident that the relationship with London will improve after the departure of Boris Johnson | International
July 8, 2022

Wallonia: At least six dead and dozens injured in a multiple hit-and-run in a Belgian town | International
March 20, 2022