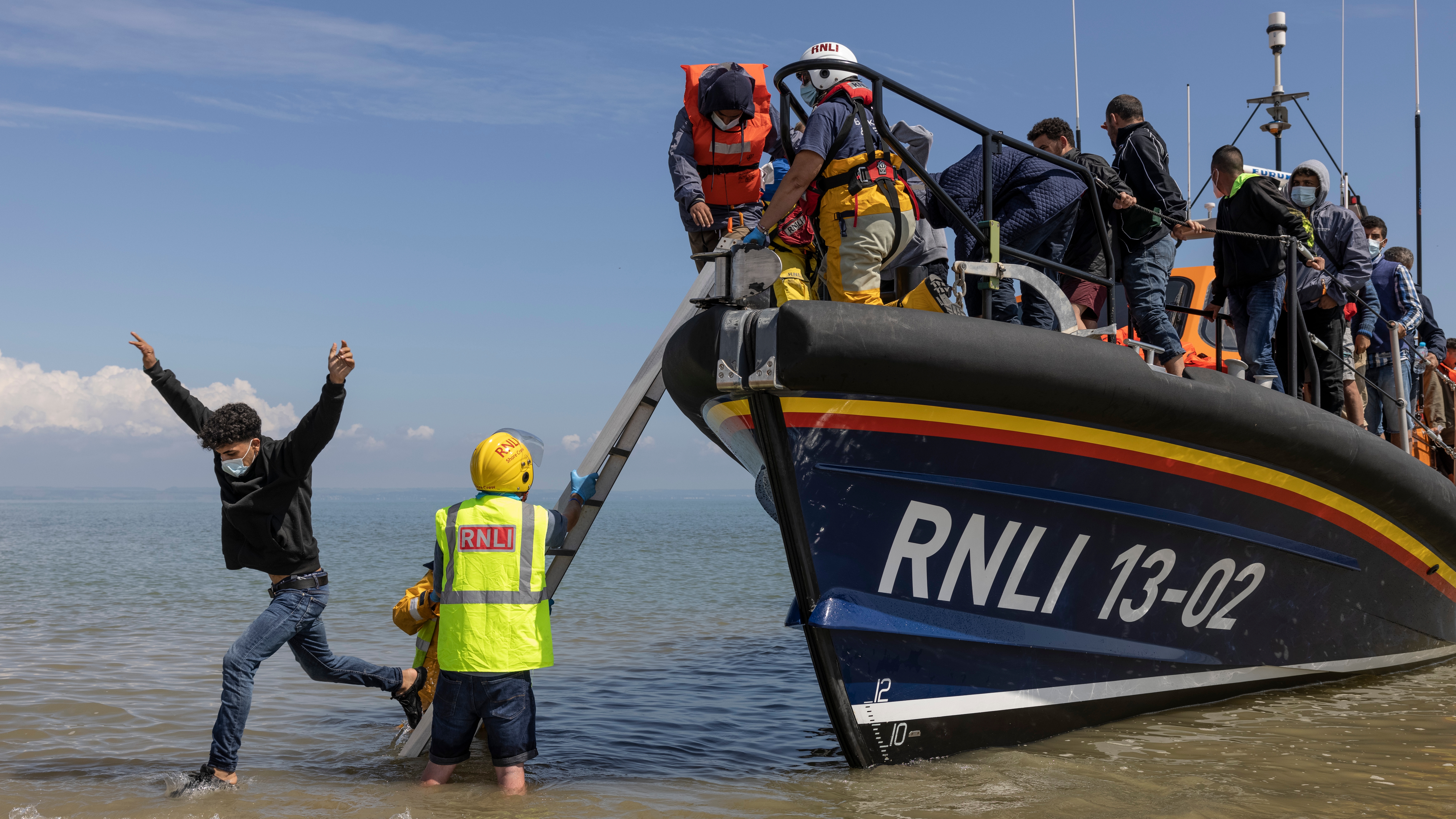 The objective reality confirms that the United Kingdom is facing an increasingly serious problem: if in 2019 there were just 300 people who tried to cross the English Channel irregularly, two years later, in 2021, the figure exceeded 28,500 (according to data compiled by the BBC; the British Home Office does not publish them). Political reality, however, suggests that Boris Johnson’s government plans to recapture the isolationist spirit of Brexit and the tight-border discourse – the Take Back ControlTake Back Control, from the infamous 2016 referendum campaign—to warm up the pre-election mood of its voters and put the Labor opposition in an awkward position.

If the first sounding balloons spoke of Albania or Ghana, the British Executive has finally chosen Rwanda, the East African country that experienced the genocidal massacre of the Tutsi minority at the hands of the Hutu government in 1994. The British Minister of the Interior, Priti Patel, has traveled this Thursday to the capital, Kigali, to sign an agreement that will involve more than 144 million euros and will allow the British authorities to re-send to that country a large part of the irregular immigrants intercepted each year in the Stain. They will be above all adult men, who mostly make up what Downing Street calls “economic migrants”: people who, according to this classification, are not really being persecuted for political, religious or any other reason, but rather aspire to greater opportunities vital.

The Johnson Government wants to make it clear that this aspiration, if it is not carried out through the narrow legal channels of the immigration process, has become a crime. “Our compassion may be infinite, but our capacity to welcome people is not,” said Johnson in the town of Kent, in a speech designed to relaunch the message of toughness against irregular immigration that was promised with the departure of the United Kingdom. from the EU. “In the same way that Brexit allowed us to take back control over immigration by replacing the freedom of movement of people with a points-based entry system, we will also take back control over illegal immigration with a new long-term plan to obtain asylum. in this country”, assured the British prime minister. Immigrants who try to cross the channel are “illegal”, according to the British Government. At no time does he speak of “irregulars”. Words, again, define politics. The new Borders and Nationalities Act, which is in its first legislative steps in Parliament, aims to penalize those who try to enter the United Kingdom illegally (and those who pilot the boats or recruit immigrants with permanent prison). .

So far in 2022, more than 4,600 people have crossed the English Channel. The record figure occurred this Wednesday, with more than 600 immigrants intercepted by the police.

“Rwanda is one of the safest places in the world, and in recent years it has become famous for its ability to relocate and settle immigrants,” said Johnson. “Many lawyers and organizations have dedicated themselves for years to making money by challenging government decisions on immigration in court, and I am sure that there will be new lawsuits in the coming months,” the prime minister anticipated. “But this is not a merciless response. I believe that the Rwandan option will become the new international model of response to the immigration problem”.

The idea of ​​sending irregular immigrants trying to reach the United Kingdom to a third country, of dubious legal security, has provoked harsh reactions from the Labor opposition and numerous refugee aid organisations. Nothing has turned back the Johnson government, which has been flirting with that strategy for months and launching possible destinations, to generate political debate and acclimatize the support of conservative voters. There was talk of Ghana or Albania, but also of abandoned oil platforms in the North Sea or even disused ferries that would remain off the British coast.

“This is a desperate and truly disgraceful announcement by the government, trying to distract attention from the fact that Johnson has broken the law,” said Yvette Cooper, Labor’s spokeswoman for Immigration. Cooper, like many other critics of the Prime Minister, has associated the Rwanda report with a move to displace the fine imposed by the police on Johnson and his Chancellor of the Exchequer from public attention for the banned parties in Downing Street during the lockdown. “It is an impracticable proposal, contrary to ethics and that supposes a clear extortion”, she has written on her Twitter account.

The Rwanda option, where many of the detained immigrants would have to wait for months for their asylum application procedures to be resolved, would be reinforced by the creation of a detention center at the Linton-on-Ouse military air base, which would host to hundreds of newcomers. According to the British Government, in this case the detained persons would be free to enter or leave the facilities, as the thousands of asylum seekers who live in hotels throughout the country already have. But the most controversial decision of the new strategy, which points to new frictions with the French government, is the use of the army to control the arrival of people through the waters of the canal. “Starting this Thursday,” Johnson announced, “the Royal Navy (Royal Navy) will assume control of the borders in the English Channel”. The budget for boats and military equipment will be increased by more than 60 million euros.

Downing Street has unsuccessfully demanded from Paris in recent months the possibility of joint patrols on French beaches, or the readmission by the neighboring country of irregular immigrants from its shores. In both cases, London has received no for an answer. “I believe that a greater effort to intercept people off the coast of France is possible”, Johnson said, “but today we want to show how the United Kingdom has achieved its own solution, in the absence of an agreement with Paris”, he has said. insured.

The British Government hides behind previous decisions such as that of the EU, which agreed with Athens on a series of immigrant reception centers on several Greek islands. Or that of the Government of Denmark, which has already approved in Parliament the decision to send new arrivals to third countries (the option of Rwanda is also on the table). Or from Australia, which retains many of them on the islands of Nauru and Manus. In fact, the Brussels authorities share the same reasoning as the British Executive: sending people back to third countries would be a deterrent for criminal organizations that enrich themselves by smuggling immigrants and would discourage travel in many cases. The EU has also studied the option of Rwanda, in the same way that it has already reached “outsourcing” agreements with Turkey, Libya and Niger.

“We are shocked by the cruel and unpleasant government decision to send to Rwanda those who seek refuge and sanctuary in our country,” said Enver Solomon, of the organization Refugee Council (Refugee Council). “Outsourcing the UK asylum system will do nothing to change the reasons many people embark on such a dangerous journey. It will only serve to increase chaos and human suffering,” Solomon said.

Barroso, from the STF, orders compulsory vaccination of the passport against covid-19 so that we can see abroad | News

Torrential rains cause at least 22 deaths in Venezuela | International

Check Also
Close
Pedro Castillo: a year and a half adrift in Peru | International
40 mins ago

By admin
Recent Posts
Latest News
Facebook Twitter WhatsApp Telegram
Back to top button
Close
Featured Posts
Macron on the abolition of bullfighting in France: “It is not the priority of the moment” | International
2 weeks ago

Russia expels 27 members of the diplomatic mission of Spain | International
May 18, 2022

Russia expels 27 members of the diplomatic mission of Spain | International

Guatemala sinks into the abyss of impunity | International
August 7, 2022

Almost a thousand dead in Pakistan due to torrential rains | International
August 27, 2022

Almost a thousand dead in Pakistan due to torrential rains | International

Payton Gendron: The perpetrator of the racist massacre in Buffalo published a detailed plan of his attack | International
May 15, 2022

Payton Gendron: The perpetrator of the racist massacre in Buffalo published a detailed plan of his attack | International

Trip to the Argentinian base Marambio, the last end of the world in Antarctica | International
October 11, 2022

Trip to the Argentinian base Marambio, the last end of the world in Antarctica | International