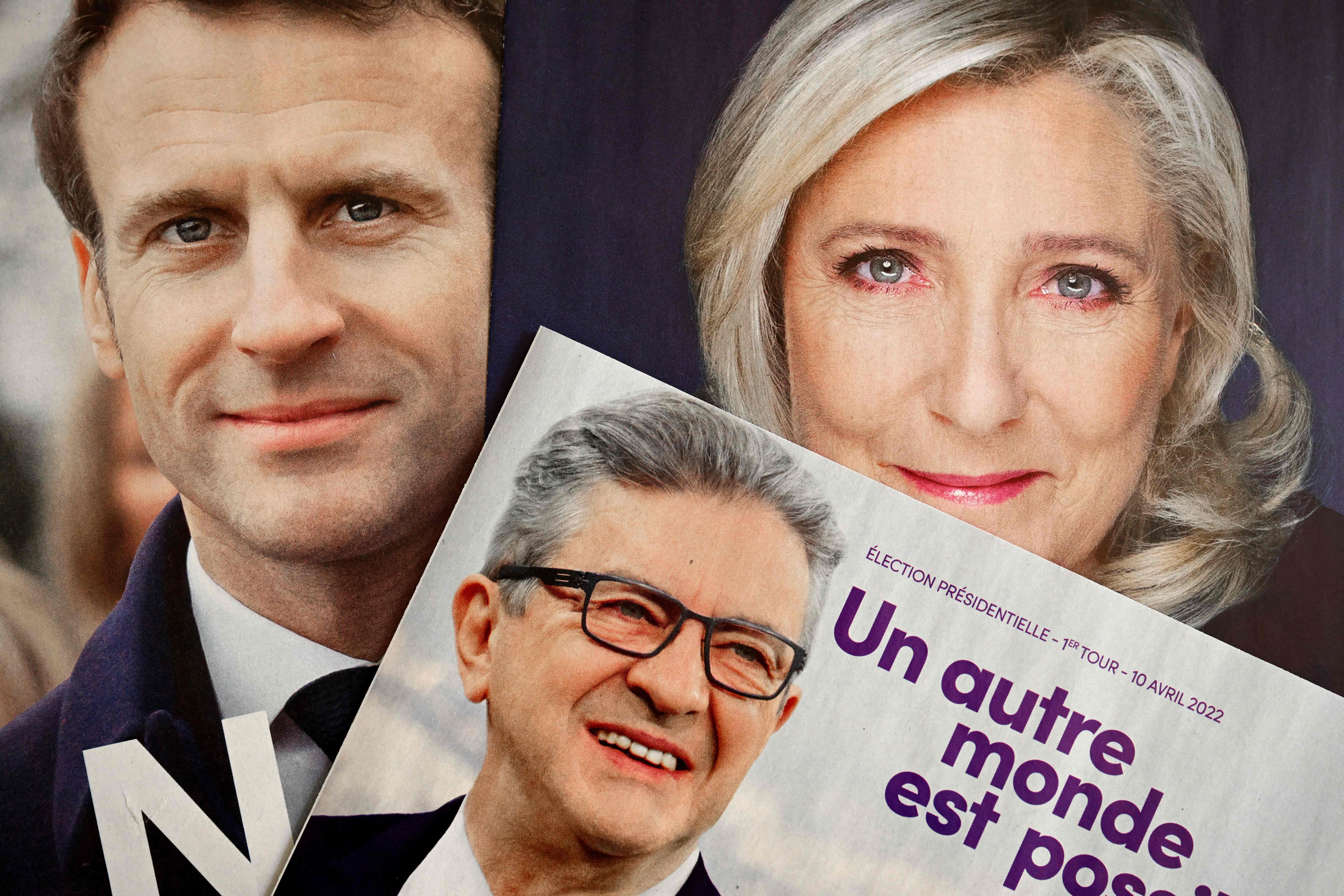 “Be careful with words”, reads one of the posters hanging in the streets of Belleville, one of the most popular and multicultural neighborhoods in Paris. From that beautiful cosmopolitan place, northwest of the French capital, Rachid chooses his own very well: “I will not vote for him. I prefer to prepare the ground for the VI Republic”. He, obviously, is Emmanuel Macron, who will run for re-election with the far-right Marine Le Pen next Sunday. Rachid, a 36-year-old Frenchman, is of Algerian origin, but Le Pen’s invectives against immigration, against Europe and his flirtations with Putin’s Russia no longer provoke the rejection of yesteryear.

A former student at the prestigious school of political studies in Paris —which he entered thanks to a special exam designed for the so-called “priority education zones” where mostly working families live—, Rachid works in Belleville but lives in Romainville, in the department of Seine-Saint-Denis located northwest of the poorest and most conflictive metropolitan area of ​​Paris. Mélechon has devastated there: there are Macron and Le Pen, but Mélenchon’s victory in many areas of the country is a good example of the so-called third France that Professor Jacques Lévy, from the Department of Cartography of the Chair of Space Intelligence of the UPHF, shuffles when analyzing the geographical dimension of the vote after the first round.

According to the study presented this week at the École Normale Supérieure, the presidential election has concentrated the votes on three candidates – Le Pen, Macron and Mélenchon – who would correspond to their “own geographical space, their own France”. This is emphasized by the sociologist Maxime Quijoux, a member of the National Conservatory of Arts et Métiers in Paris, to explain that both Le Pen and Mélenchon speak directly to the most disadvantaged classes. “But they don’t speak to the poor themselves,” he says.

Le Pen addresses the poor whites, has a nativist conception of the nation, and with the rhetoric of distant elites activates the vote in rural areas; Mélenchon speaks of the “Creole Republic”, the multicultural and diverse one, more mobilized this time by the fear that the speech of the far-rightist Éric Zemmour has aroused with his theory of the “great replacement”. “Think what would happen if there was a party in your country called La Reconquista,” says Quijoux. Fear of Zemmour and Mélenchon’s integrative discourse have mobilized a mestizo electorate that did not participate in the previous elections. The third France where the rebellious Mélenchon has reinforced the vote is that of the big cities outside of Paris and the suburbs of Île-de-France, on the outskirts of the capital.

From there, from the very heart of Paris, François speaks. “Right now the anger against Macron is stronger in me than the fear of Le Pen,” says this social worker who was born in the capital and also voted for Mélenchon. “I don’t know what I’ll do yet. Every day I think of one thing.” François feels “scammed” because he entrusted his vote to Macron in 2017 according to a republican conscience that dictated the need to make the cordon sanitaire in front of Le Pen. That awareness seems to blur at the gates of the second round. François has just heard a statement from the president in Denain, in the north of France, in which he affirms, contrary to what he said in 2017, that at that time there was no republican front against Marine Le Pen, that in reality the people voted for the. “Do you think we’re stupid or what?” he snaps. François is one of the many who highlight Macron’s arrogance these days, the distance he projects in his way of exercising power. “And to top it off, he is paving the way for a return to the old seven-year presidential term. Isn’t that what we criticize about populist politicians, who change the rules of the game when they are in power to perpetuate themselves in office?

The echo of those words is heard in other parts of Paris, in many corners of the country. And on social networks: the social and political abyss that exists today in France circulates through the networks through a video where Macron is seen visiting those northern areas that today are Le Pen’s domains. The old mining and industrial territory welcomes a president who has finally become a candidate with boos and applause. A corpulent man stands out from that crowd, with a harsh gesture and rough manners who shouts at him furiously: “I have never seen a president of the Fifth Republic as bad as you.” If there is such a thing as a man of the people, outside of any populist meaning or rhetoric, it is undoubtedly that local who never tires of insulting Macron: “Liar, Machiavellian, manipulator.” The man explains that he voted for him in 2017 and feels disappointed. Macron dares to deal with this kind of situation: he condescendingly grabs his hand to placate him, but he fails. That anger, more than the fear of Le Pen, is the main rival Macron will have to face in the final part of this campaign. And that tremendous anger most likely explains the abstention and part of the transfer of votes that will go from Mélenchon to Le Pen.

It is true that both candidates, Le Pen and Mélenchon, share important points that also explain this confluence of voters despite the fact that they are ideologically at odds. Professor Lévy speaks of a “porosity” in the two protesting families due to their common hatred for Macron, his argumentative populism and some programmatic convergences in terms of welfare state protection policies, a foreign policy close to Putinism, or the idea of a Europe of nations. “But the criticisms that both candidates make of Europe are different, despite the fact that an idea of ​​convergence between the extremes is presented that makes experts speak of a single model confronting Macron’s liberal Europeanist”, argues François. This 32-year-old does not feel comfortable with the figure of Mélenchon, but he appreciates the youth and preparation of the cadres closest to him. The person in charge of his program, the young Clémence Guette, begins to be popular with the rebellious; Adrien Quatennens, 31, is being considered as Mélenchon’s possible successor. From that political space, that generation will have to show if it is capable of rebuilding the alternative for the left in the era postmélenchon and test whether, indeed, there is a different political proposal that fits with the third France. The question they don’t answer is whether that will be possible if Le Pen wins. Perhaps because the answer is obvious. “Be careful with words”, says that Belleville sign. And even more careful with the votes.

Elections: The Brazilian Minister of Defense asks for access to the secret codes of the electronic ballot boxes | International

By admin
Recent Posts
Latest News
Facebook Twitter WhatsApp Telegram
Back to top button
Close
Featured Posts
Gazprom suggests to Germany that it could send gas through the branch of the Nord Stream 2 that was not damaged in the sabotage | International
October 3, 2022

Giuseppe Conte: “If Meloni continues winking at Orbán, Italy will be marginal in Europe” | International
October 10, 2022

Giuseppe Conte: “If Meloni continues winking at Orbán, Italy will be marginal in Europe” | International

Davos Forum: Bill Browder, the financier who stood up to the Kremlin: “The determination to fight Putin is beginning to crack” | International
May 31, 2022

Davos Forum: Bill Browder, the financier who stood up to the Kremlin: “The determination to fight Putin is beginning to crack” | International

Sanna Marin: Does the prime minister have the right to dance? | Opinion
August 24, 2022

Sanna Marin: Does the prime minister have the right to dance? | Opinion

Michelle Bachelet reveals China’s pressure on the UN to hide the repression of the Uyghur minority | International
August 25, 2022

Argentine inflation accelerates in June and reaches 64% per year
July 15, 2022

Argentine inflation accelerates in June and reaches 64% per year