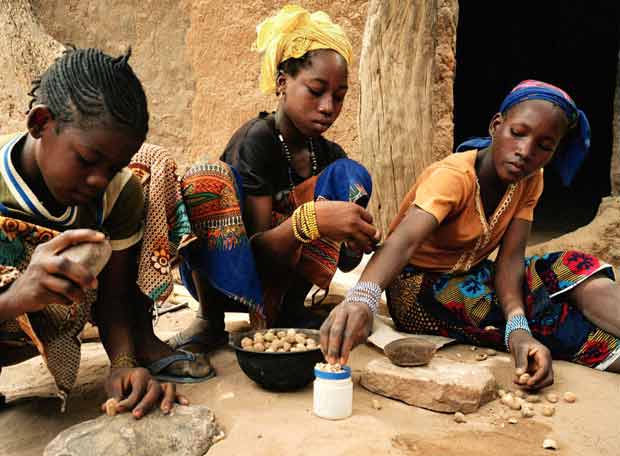 Unlike lovers, they have no past; unlike marriages, they have no future. This is what many of the 74 lowest-income countries in the world feel. This year they must repay some 35,000 million dollars (31,700 million euros), according to data from the World Bank, in loans. 45% more than in 2020 (latest data available). An utopia. Emerging markets and developing economies account for 40% of the planet’s GDP. Before the war in Ukraine, many were already crossing the fenced paths of default. Covid-19 increased indebtedness to its maximum in 50 years, the equivalent of more than 250% of government revenues. “Nearly 60% of these nations” —confirms a spokesperson for the International Monetary Fund, IMF—“are in a high-risk situation or in debt difficulties, although only a handful are facing insolvency.” Despite everything, the debt burden in middle-income countries is at its highest level in 30 years; the oldest in a generation.

The morning darkens. High inflation. Slow growth. Tightening of financial conditions. While the “accounts” of the planet have the fragility of cracked porcelain. In the last two years, the G20 has tried to ease the pressure. In April 2020, the major economies agreed —using the Debt Service Suspension Initiative, DSSI— to delay the payment of $20 billion owed by those 74 countries. The calm was extended until the end of 2021. But only 42 were able to return 12.7 billion.

“These nations need substantial debt relief,” admits Kenneth Rogoff, a professor of economics and public policy at Harvard University and a world reference in this field, by telephone. “The problem is that after the HIPC initiative [rebaja de la deuda a los países pobres con un elevado endeudamiento] that began in 1996, when rich nations drastically wrote off debts to official creditors, many changed course, and fell back into debt to the private sector and China. Neither of which are willing to forget,” he adds. If Europe, the United States, the IMF and the World Bank once again reduced their commitments to zero, it would be of little use in the face of the refusal of the private sector and China. The Asian giant owns —according to the latter institution— 37% of the debt of those 74 lands. In other words, it should receive some 11,800 million euros this year. A similar amount (13,400 million) to that controlled by private creditors.

Nothing in the financial markets is guided by altruism. “Credit and debt – especially between power and a developing country – are never innocent. At a minimum, it creates a link that can be used in many ways. The increase in loans from China to Africa goes hand in hand with its ambitions and the expansion of its economic and commercial footprint”, admits the sinologist and expert on the country, Francesco Sisci. But in the African case — he summarizes — there is a risk. Extending that debt in excess: where does it lead?

China can keep mines or infrastructure for defaults. But states could also respond with nationalizations. “It is common to accuse the country” — underlines the professor of Economics, José García Montalvo — “of ‘the diplomacy of the debt trap’, since it floods a nation with credit to the point of not being able to pay and then it is done with assets strategic (ports, highways)”. However, it is quite inclined to grant cancellations: “Although it is not known for sure in what proportion”, clarifies the teacher. Beijing tries not to fail the adventure. In fact, David Malpass, president of the World Bank, has already warned that “the extraction of resources by lenders” means that “the risk of a disorderly default is growing”.

Few hear the same echoes as in the debt crisis of the 1980s in Latin America, but fire does not get along with splinters. Who imagined a war in Europe? “The situation today in Latin America is different from that of those years. Now in the region there are very diverse situations. They vary quite a bit depending on the country you are analyzing, but we are facing an issue that should concern us a lot”, reflects Daniel Titelman, director of the Economic Development Division of ECLAC (Economic Commission for Latin America and the Caribbean). Two numbers look at each other from opposite sides of the street. The debt to GDP of the 16 main economies was 54.4% in 2021. A social response to the pandemic. However, 6.1% of the region’s wealth is “plundered”. More than 325,000 million dollars (295,000 million euros) are filtered through the tax sink of evasion and fraud.

The danger is great. There are at least a dozen developing economies (Sri Lanka, Tunisia, Belarus, Jordan, Mauritania, Turkey, El Salvador, Malaysia, Djibouti) that could be unable to pay their debt in 2022. “Sri Lanka and Tunisia are already trying to obtain help from the IMF and other countries may follow suit,” predicts David Rees, senior emerging markets economist at Schroders. They are small nations, but Russia is a giant. And a mystery, and an enigma; and a riddle. “It is curious that she has not yet defaulted, as it is not obvious what additional punishments can be imposed on her,” observes Kenneth Rogoff. “However, perhaps, there is a fear that the spectacle of default will strengthen those in Europe who want to stop supporting the Russian war machine through the purchase of oil and gas,” he adds. The country could pay. External debt only accounts for 75% of reserves. Although their subscriptions are blocked. No one, however, seems to have calculated: how, despite its horror, coexist with Russia without cornering it? The great powers of the time did it with Germany and we know what history’s response was.

“Although a systemic debt crisis has been avoided so far, it cannot be totally excluded,” warns a spokesman for the International Monetary Fund (IMF). “You have to admit and address problems early.” The G20 has created the Common Framework for Debt Treatments. This “common framework” forces participating countries to agree terms with bilateral creditors (governments) and the IMF, and then secure debt relief from private lenders. Only Zambia, Ethiopia and Chad have started talks. It’s like raising your hand and admitting, “I’m in serious trouble.” If they do, they know that punishment from the private sector is certain. “You have to watch the unique circumstances of each country,” warns Shaniel Ramjee, manager of the Pictet Emerging Markets Multi Asset fund. Nobody lends for free.

University student who fell from the 13th floor dies

Kate Bedingfield: US believes Putin’s advisers are hiding the reality of the war in Ukraine from him | International
March 31, 2022

Kate Bedingfield: US believes Putin’s advisers are hiding the reality of the war in Ukraine from him | International

Red Cross: Jordi Raich: “We are all overwhelmed by the dimension of the migration problem” | International
March 31, 2022

Red Cross: Jordi Raich: “We are all overwhelmed by the dimension of the migration problem” | International

The Russian invasion of Ukraine cracks the ultra-conservative alliance between Poland and Hungary | International
April 1, 2022

Elections in Brazil: The mystery of Bolsonaro’s political future: what will he do now? | International
October 31, 2022

Elections in Brazil: The mystery of Bolsonaro’s political future: what will he do now? | International

Collaborating with the enemy, the suspicion that poisons the people of Ukraine | International
April 30, 2022

Collaborating with the enemy, the suspicion that poisons the people of Ukraine | International

Putin takes the war to its most dangerous phase after suffering serious setbacks | International
October 2, 2022

Ukraine stops the flow of gas to Europe from a zone occupied by Russia | International
May 11, 2022