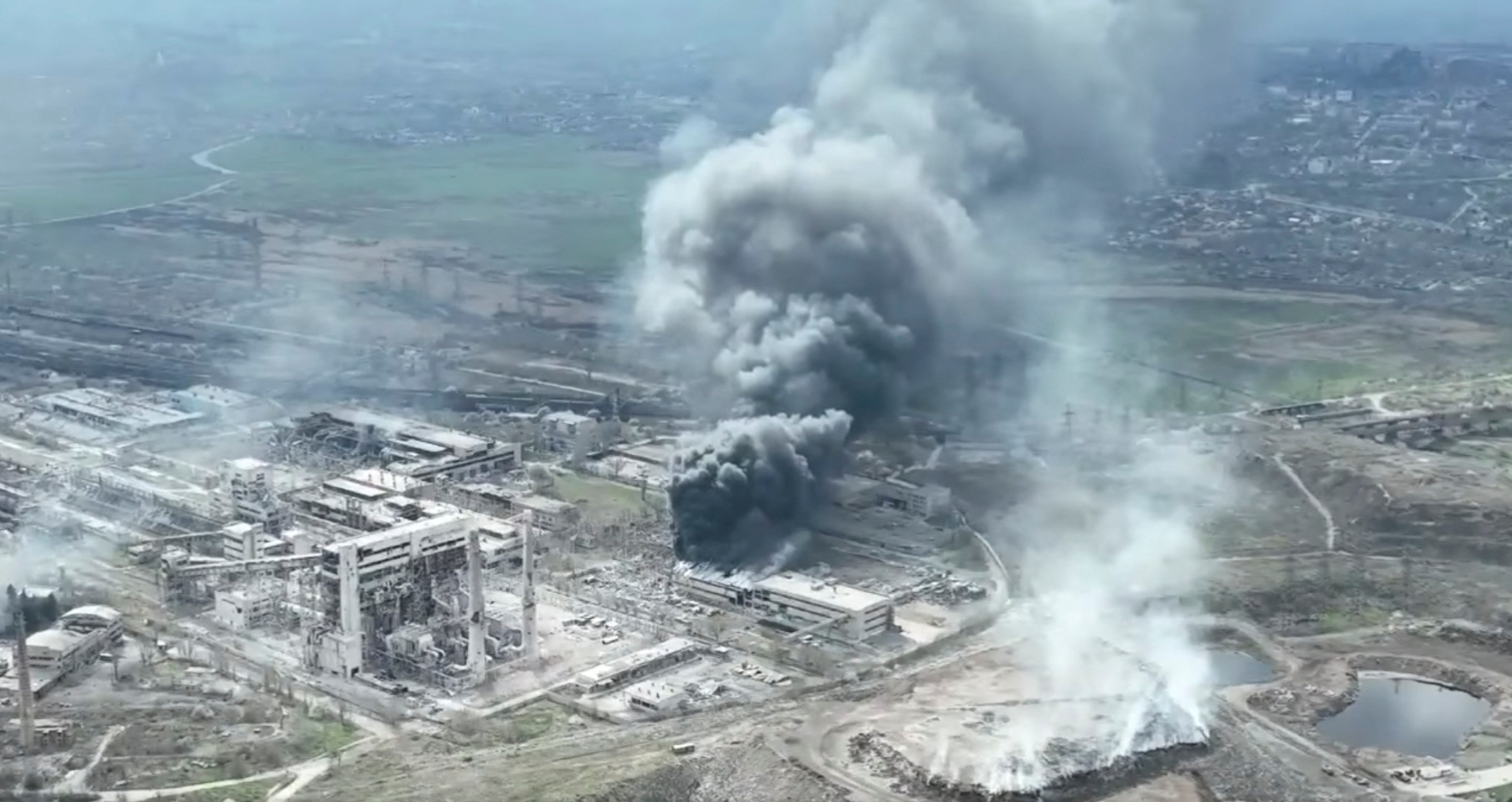 Russia has intensified missile attacks on Ukrainian positions on the Eastern and Southern fronts. Kharkov, in the northeast of the country, Mikolaiv, to the south, on the Black Sea coast, and the few municipalities not yet occupied by Russia in the Donbas region are experiencing increasing levels of destruction. Ukrainian President Volodymyr Zelensky announced on Monday that Moscow had launched the long-awaited new major offensive to gain full control of Donbas. The resurgence of operations with ballistic missiles and grad rocket launchers is causing dozens of civilian deaths in the eastern and southern regions of Ukraine. The night has been particularly violent in two enclaves where Russia is expected to put all the meat on the grill to occupy them: in the province of Mikolaiv, at the gates of Odessa, and in Donbas, where it already occupies most of the region. The priority of the invading power is to take full control of this region to end the military operation that began in 2014 giving support to the pro-Russian separatists in the provinces of Donetsk and Lugansk. The Russian Foreign Minister, Seguéi Lavrov, reported on Tuesday that the new phase of the invasion has begun to achieve the “complete liberation” of Donbas.

The Ukrainian government has confirmed that this Tuesday humanitarian corridors cannot be agreed with the Russian counterpart to evacuate civilians from Donbas due to the danger of the situation. The Ukrainian General Staff has also specified this Tuesday that the ground offensive has not yet begun and that the bombardments they are suffering on their territory are of a “tactical” nature.

In this sense, the four missiles that fell on Monday in Lviv, in western Ukraine, aimed at military logistics centers are framed. One of the rockets destroyed a vehicle repair company. Seven civilians were killed and 11 wounded. Lviv, like other western municipalities near the borders with the European Union, are key to the supply of weapons from NATO member states.

The Ukrainian General Staff has indicated in its daily report that the transfer of Russian ground units to the eastern borders, those of the Kharkov, Donetsk and Lugansk provinces, is still underway. The Ukrainian Armed Forces specified that their enemy is “transferring additional divisions” of short-range and long-range anti-aircraft batteries to the positions that maintain the siege on Kharkov, Ukraine’s second city. Zelensky commented in his message to the population on Monday night that “in the east and south of the country, the enemy is acting in a slightly more planned way” to avoid losses among its troops and armor.

The special envoys of EL PAÍS verified this weekend in Kharkov how Russia reinforced its pressure with missiles on the city. The city center was subject to constant rocket attacks on Friday, Saturday and Sunday. Most destroyed residential buildings and caused multiple civilian casualties. Ukrainian defense batteries also rumbled endlessly, preventing Russian forces from daring a ground invasion.

In Kramatorsk, the last large municipality in Donetsk in Ukrainian hands, there have been harsh artillery exchanges and a barrage of missiles on the Ukrainian defense lines last night. The City Council of this city of 160,000 inhabitants two weeks ago asked the 25% of the remaining inhabitants to leave their homes in the face of an imminent destruction of their urban centers.

The same has happened in Mikolaiv and in the Kherson region. Mikolaiv is of fundamental importance for Russia because it is, together with Odessa, the last city that it does not control on the Black Sea coast. Furthermore, from neighboring Kherson, already in the hands of the invader, Russian artillery is hammering the Ukrainian positions on the border with the Zaporizhia region. This movement seeks to surround this province from the south and from the north, in Donetsk. Zaporizhia is the main exit point for people fleeing Mariupol and Berdyansk, two Russian-controlled cities on the Sea of ​​Azov coast.

In Mariupol, devastated by the war, a bag of Ukrainian soldiers and civilians still resists, around 100,000, completely surrounded and with an uncertain future. The Ukrainian General Staff has reported that the general situation in Mariupol does not present major developments. Despite this, a representative of the City Council has released a video this morning in which smoke caused by missiles that have impacted residential areas where citizens still live could be seen.

Pro-Russians in Donbas, meanwhile, have reported the assault on the city’s Azovstal steelworks, the main focus of armed resistance. “As far as I know, some assault groups, specially selected for this mission, have already started their work and the Russian Federation helps us with its aviation and artillery,” said the spokesman for the militias of the self-proclaimed republic. popular of Donetsk, Eduard Basurin.

According to the Ukrainian authorities, together with the armed forces, there are about a thousand civilians in the Azovstal steelworks, including women and children. The Chechen leader Ramzán Kadírov, a fundamental ally on the battlefield of Vladimir Putin, has stated that this Tuesday, Azovstal will be in the hands of the Russians. Moscow has given the Ukrainian forces until three in the afternoon, Spanish time, to evacuate civilians from these facilities.

The most intense clashes between the two Armies are taking place in Izium, a municipality in Donetsk taken over by the Russians and that the forces of the invaded country want to recover. Also in Avdivka, a town adjacent to the city of Donetsk —dominated by Russia—, the invading artillery has redoubled its activity to expel the Ukrainian resistance. In towns around Severodonetsk, under Ukrainian control in the Luhansk province, the General Staff has stressed that street-by-street fighting is taking place. The head of the Lugansk military region, Serhi Haidai, has demanded that the population that still lives in these municipalities leave their homes to the west.

Zelensky stressed that the Russian autocrat, Vladimir Putin, will not be able to maintain the current rate of missile use for long because the sanctions that the international community has applied to Russia, especially imports, make it impossible for him to resume production of a new arsenal. Regarding the offensive in Donbas, the Ukrainian president stated in his harangue that “no matter how many soldiers Russia sends there, Ukraine will fight and defend itself day by day.” In Dnipro, a city that acts as a defense axis between the enclaves of the Eastern Front, the movement of military convoys and trucks in the direction of Kharkov and Kramatorsk has been developed throughout the night. Units move in groups of at most three vehicles to avoid being an easy target for the greater Russian air power.

An investment in the EU of 300,000 million as a lever for a better future | International

The street escalation of Kirchnerism cracks the opposition in Argentina

Obama, to the rescue of the Democrats in key States: “In these elections we are risking democracy” | International

Draghi, another crack in the European wall | International
July 17, 2022

Draghi, another crack in the European wall | International

Putin threatens to break the agreement on the export of Ukrainian grain | International
September 7, 2022

Rodolfo Hernández’s story about the disappearance of his daughter | Presidential Elections Colombia
June 16, 2022

One last gift from Isabel II to her son Carlos: the title of queen consort for Camila | International
September 9, 2022

One last gift from Isabel II to her son Carlos: the title of queen consort for Camila | International

Video analysis | Who are the mercenaries who defend Putin under the name ‘Wagner’? | Videos
March 18, 2022

Video analysis | Who are the mercenaries who defend Putin under the name ‘Wagner’? | Videos

Sinn Féin’s victory will not lead to the union of Ireland in the near future | International
May 23, 2022

Brazil Elections 2022: Lula and Bolsonaro focus on the voter who most resists them: evangelicals and women | International
October 21, 2022