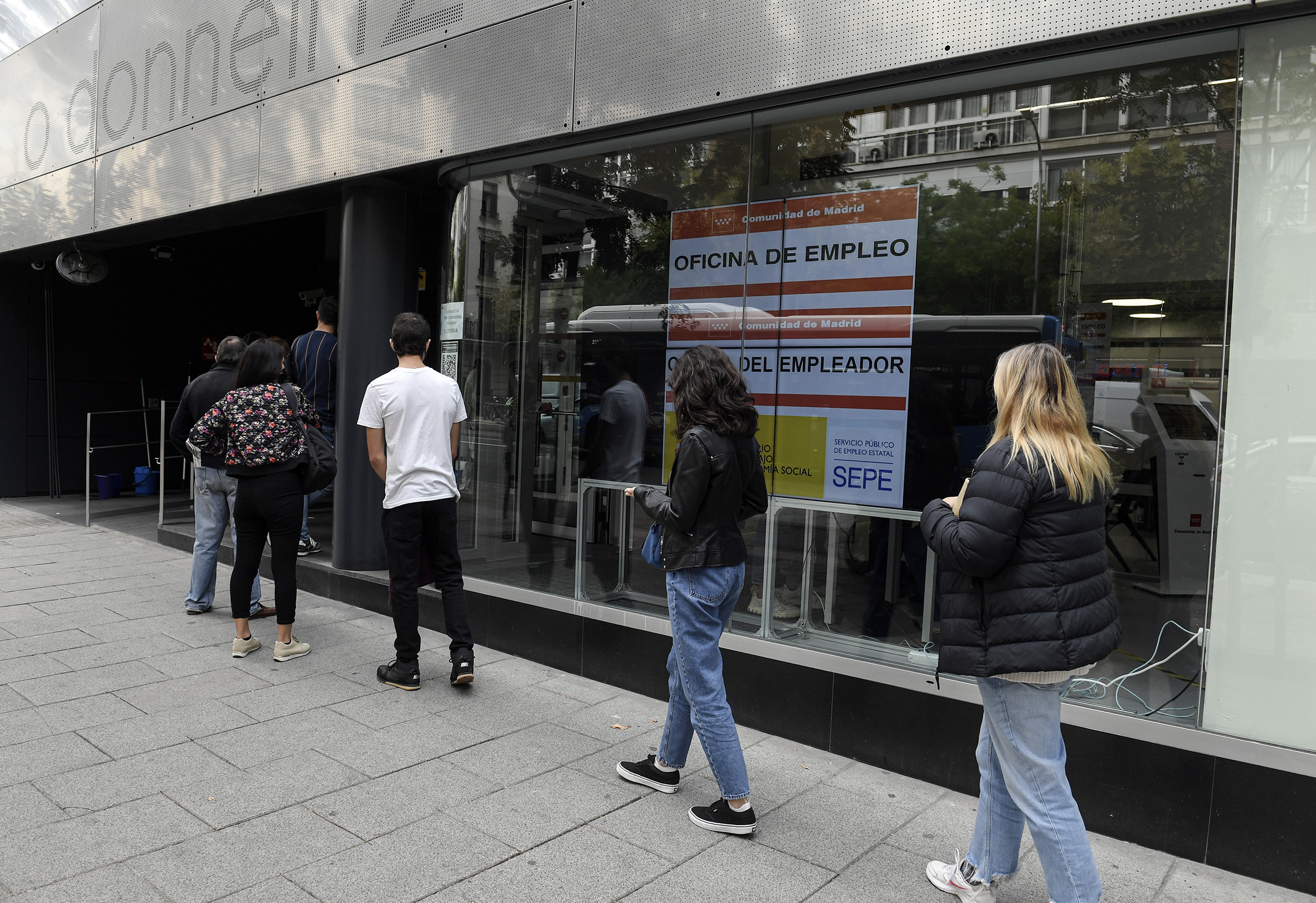 If it is observed that the number of unemployed in Spain has decreased by 897,000 people compared to a year ago, the feeling must necessarily be positive. But a closer look at the 3.1 million unemployed who still persist reveals that, of them, 912,000 (27%, three points more than at the end of 2020) are long-term (that is, they have been looking for a job for least two years), almost seven points above the community average, which is 20.2%. The picture, therefore, is somewhat more worrying, especially if one considers that they represent 30% of the total number of long-term unemployed in the entire European Union: Spain alone adds as many as Sweden, Denmark, Finland, Poland , the Czech Republic, Hungary, the Netherlands, Austria, Romania, Portugal, Belgium, Greece, Croatia, Bulgaria, Cyprus, Latvia and Lithuania combined, according to the latest Adecco Monitor of Opportunities and Job Satisfaction.

It is not simply a question of a population ratio, since countries with a much larger population than Spain (47.4 million) have fewer long-term unemployed: Germany, for example, has 245,900, with more than 83 million citizens; France, 348,900 (and 67.3 million) and Italy, 827,000 (with 59.3 million). “It is a phenomenon that feeds on itself. On the one hand, we are a country that presents, almost endemically, high unemployment rates, around 13.5-14%. And that is combined with a model in which there is no adequate adjustment between the training offer and what the market demands”, says Javier Blasco, director of The Adecco Institute. “We are a country with an important university education (exactly double that of those who study Vocational Training), when FP has twice the employment rate than the other”, he stresses.

For Fernando Castelló-Sirvent, professor at ESIC, it is a lack of harmony that has two aspects: the lack of education and training of the unemployed (and very particularly with regard to their digital skills), on the side of the labor market supply, and the low productivity of companies compared to neighboring countries, on the demand side. A critical situation that he, he points out, has worsened as a result of the pandemic: “In fact, the risk of the new normality is to perpetuate companies zombies that focus their activity on the subsistence and refinancing of the consolidated debt during the first months of the pandemic”.

The situation does not affect the different autonomous communities equally: Andalusia (31.1%) and Asturias (30.5%) are the ones with the highest percentage of long-term unemployed, while the Balearic Islands remain the one with the least ( 18%). Some differences that “are due to the heterogeneity of productivity and competitiveness, and to the differences between the business networks of one and the other”, explains Castelló. In areas of low unemployment such as the Basque Country or Navarra, this unemployment “has to do with people who, effectively, do not have adequate training or who are outside the market because they are neither looking, nor studying, nor working; it is much more marginal. On the contrary, in areas with a high level of unemployment (Extremadura, Murcia, Castilla-La Mancha…), it is related to an inbreeding problem in the productive fabric, and historical unemployment that, it is true, has been improving with time”, explains Blasco. The trend, in any case, is upwards: 15 of the 17 communities (all except Extremadura and Castilla-La Mancha) have increased this percentage.

According to experts, long-term unemployment is centered above all in two sectors: that of senior workers and that of people with few (or inadequate) qualifications, regardless of age. With the aggravating circumstance, Blasco maintains, that the regulations do not adequately protect senior workers: “Protection policies for unemployed people have focused more on certain groups, such as the youngest or those with the most difficult insertion, while, Today, the only solution that older people have is the cost of dismissal… and that only in those cases in which they have a certain seniority and a relatively high salary, which makes the cost of dismissal deter that unwanted exit” from the labor market.

The solution is, first of all, to take advantage of senior talent, “with a labor strategy win-win that values ​​all that experience and training, tutoring junior workers and allowing an improvement in business productivity”, says Castelló. Regarding low-skilled workers, he adds, it is necessary to apply a disruptive change in the supply training system, betting on the development of skills, job reorientation and professional requalification, without forgetting the demotivating factor suffered by all the unemployed long-term: “Each month that passes the reincorporation of these workers becomes less likely, both due to a potential demotivation inherent to issues of self-esteem and personal value, as well as due to their disconnection with respect to work in a company”. The director of The Adecco Institute expresses himself in similar lines: “We must influence, persuade and advise people so that they reorient their academic career to those sectors where there is more employment.”

Opportunities for employment and professional development

What sectors are, then, those that offer more possibilities of labor insertion? “The professions linked to the digital economy, such as data science, artificial intelligence, new technologies based on blockchain, cybersecurity or even cryptoeconomics”, says the ESIC teacher. But it is equally important to ensure that workers acquire the skills and competencies necessary for that labor market, in a context where active employment policies have not been particularly effective, “because, if they have been characterized by anything, it is because they do not exist as such. What has been put into operation the most are passive policies, benefit payments”, Blasco claims. “I believe that specialized personnel are needed to be able to give adequate advice and plan the actions that allow people to return to the labor market.”

For the director, greater public-private collaboration is necessary to overcome the historical distrust that, he says, has always existed regarding private activity, “despite the fact that the rate of intermediation and efficiency is much higher than in the sector public. We are talking about placement agencies, temporary employment agencies…” What, then, is wrong? “Apart from investments in training, the model needs to be aligned. Training contracts, alternating learning contracts, are very rigid, and this has meant that their use is always anecdotal, never exceeding 0.1% of the total number of contracts. And the internship contracts a little more, but in very specific sectors”.

“Why in the new labor reform is it still prohibited for a person over 30 years of age to be given a training contract, alternating, to have a level 1 and 2 access to a certificate of professionalism? It is possibly the most suitable degree”, she assures. “When a person is 45 or 50 years old, you cannot make a contract expecting them to dedicate between 700 and 900 hours to a level 3 certificate, because that is practically a school year and this person could hardly work. These age barriers must be removed. Some limitations that also affect the Red Funds for the acquisition of digital skills, which also exclude those over 30 years of age. “It seems that, from that age, one does not have the right to requalify from the point of view of digital skills.”

For training for employment to be effective, “a job is required bottom up [de abajo a arriba], from the local to the national level; from knowledge of technical and specific training needs, to the development of soft skills such as critical thinking, leadership or teamwork, among others”, Castelló concludes. “I have had the opportunity to participate as an analyst and evaluator of municipal public policies in multiple projects with municipalities of the Valencian Community, in which the detailed advice has allowed taking advantage of the knowledge that local entities may have of the business fabric of their economic area of influence, generating industrial and employment policy synergies for thousands of unemployed people in these municipalities”. Ultimately, it is about improving the granularity of public policies, through better knowledge of companies and employees.

The tax burden on labor grows in most OECD countries | Economy

Fenerbahce Beko won the giant derby! Galatasaray could not protect the advantage…

The decision on Hajj and Umrah travels is in the Official Gazette.

I cannot find a shepherd with a salary of 7 thousand 500 TL!

By admin
Recent Posts
Latest News
Facebook Twitter WhatsApp Telegram
Back to top button
Close
Featured Posts
United States Elections: Hunting for the last vote in Georgia, the hinge state that can decide control of the Senate | US Elections
3 weeks ago

United States Elections: Hunting for the last vote in Georgia, the hinge state that can decide control of the Senate | US Elections

The end of the battle in Mariupol gives Putin his main military victory in Ukraine | International
May 17, 2022

The Argentine crisis: the war at the top of Kirchnerism gives wings to social unrest
May 8, 2022

The Argentine crisis: the war at the top of Kirchnerism gives wings to social unrest

Bolivian coca growers march against a ‘parallel market’ for their product in La Paz
September 10, 2022

Elizabeth II was not born to be queen | International
September 10, 2022

Elizabeth II was not born to be queen | International

João Doria: The soap opera to forge an alternative candidacy to those of Lula and Bolsonaro gets entangled in Brazil | International
May 24, 2022

João Doria: The soap opera to forge an alternative candidacy to those of Lula and Bolsonaro gets entangled in Brazil | International

The possibilities of a debate vanish before the silence of Hernández | Presidential Elections Colombia
June 17, 2022

The authorities try to unravel the “confusing” statements of the author of the Berlin outrage, who has psychiatric problems | International
June 9, 2022

The authorities try to unravel the “confusing” statements of the author of the Berlin outrage, who has psychiatric problems | International