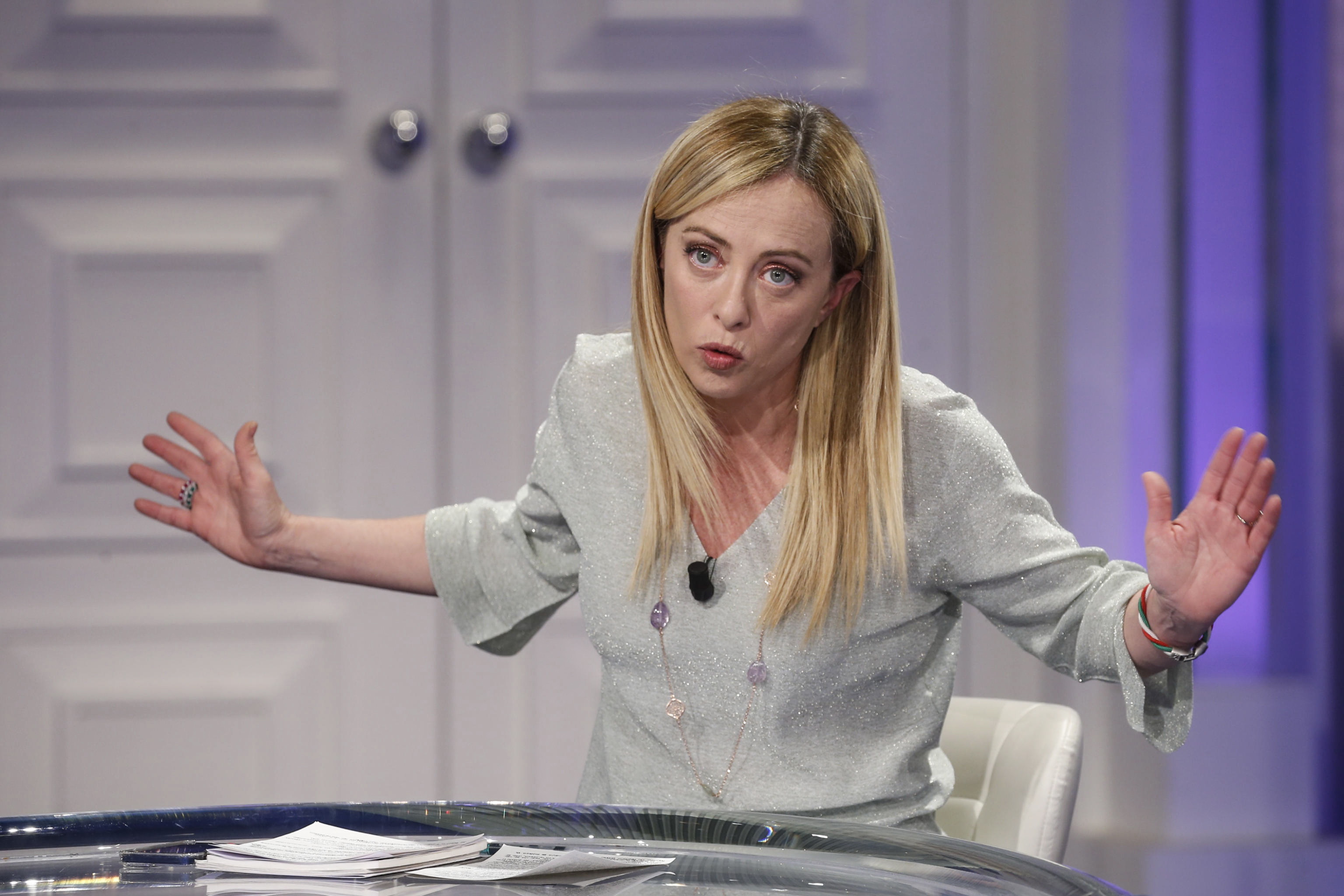 Italy is spending the last months of its legislature in a kind of political mixer where the war and the pandemic have anesthetized the old self-destructive spirit of its Parliament. And, in this unusual context, a figure has grown like no other, becoming the candidate with the most support in the polls and the leader of the only opposition party. Giorgia Meloni, head of the Brothers of Italy poster, a formation born from the embers of the post-fascist Italian Social Movement (MSI) and today converted into a broader ideological mold, is already the reference of the right in Italy. The programmatic congress of her party, held this weekend in Milan, has certified her leadership, a turn towards a certain moderation and an undisguised government ambition that is already translated into a shameless takeover bid to the right. Meloni no longer hides it. If her partners want to maintain the idea of ​​government through a coalition, they will have to get on her bandwagon.

Meloni begins to be seen in the Chigi Palace, seat of the Italian Executive. “The conservative party is born,” he announced in his speech on Friday, which lasted an hour and 10 minutes. “It’s women’s time,” she insisted. The staging of the congress, held in Milan, was already a clear warning to sailors. The Lombard capital, Italy’s economic engine, is the hometown and headquarters of its two coalition partners: Matteo Salvini (Liga) and Silvio Berlusconi (Forza Italia). Brothers of Italy, on the other hand, has always been an eminently Roman party with roots in the central-southern part of the country. But its presence in the north is growing exponentially: in the last municipal elections it was about to overtake the League. Forza Italia, whose leader is 85 years old and has been unable to set up a replacement, is a decomposing formation. And the League is in free fall and without a clear ideological direction after months of lurching and slipping by Salvini. In a scenario of confusion among conservative voters, Meloni presents himself as the only reliable and solid option on the right.

The coalition of the three conservative parties is also made some foxes. The distance is huge. On Friday, Meloni did not even mention his partners. Guido Crosetto, one of the founders of Brothers of Italy and ideological pillar of the more moderate soul of the formation, acknowledges that the battle of the Quirinal a little over a year ago, in which they could not agree with their partners, caused a lot of wear and tear . Since then, sources from both parties explain, they have not seen or spoken to each other. “Right now it is difficult to find meeting points. But this in politics is not a problem. The day before forming a government, the PD [Partido Democrático] He almost said that the 5-Star Movement had to be kicked out of the country. And then they made an Executive together. If they managed to unite, how can people who have been working on the same project for 30 years not do it”, he points out.

The health of the coalition is key if the right wants to win the elections with the majority electoral system (it would not be surprising if it changed from here to the elections). The polls today are clear. If there were elections – in principle they will be in April 2023 – Meloni would win and could govern if he concurs in coalition with his partners. Roberto D’Alimonte, a political scientist and the highest authority on demographic issues in Italy, believes that the trend will give him around 25% of the vote within a year. “Brothers of Italy would be the first party of the right in Italy. And probably also of the whole parliamentary system. Today there are two parties over 20%: them and the PD. But more important for Meloni is to be the first of the Italian right. Salvini, all the polls say, is four or five [puntos] below her. But Meloni has a problem of legitimacy to govern. He comes from a past history of sovereignism and anti-Europeanism. And there are some pieces of the formation that still feel their roots in post-fascism. She tries to get away from that because she delegitimizes it too.” She has a distance from the past that does not prevent her from avoiding celebrating April 25, the day of Italy’s liberation from Nazi-fascism, nor clearly condemning some episodes in history.

The programmatic Congress of Brothers of Italy, Vox’s partner in Europe, confirmed the facelift of the party and tried to show the business community in the north that the party has a broad and prepared ruling class. “If we want to govern, we have to be in Milan and convince that part of society of the robustness of the party,” says one of its leaders. The slogans were clear: government aspiration, somewhat more moderate and clearly Atlantic vision of international politics (although with some criticism of Biden) and traditional values ​​scheme: family, church and nation. “I will fight against surrogacy,” he announced. Or also: “The process of globalization has failed”. The position on the Ukraine issue is very clearly against Russia. “We know who our international allies are,” he said Friday. And also around Europe he has attenuated his critical positions, although with nuances: “We will build a confederal Europe without bureaucrats.” She knows that in order to govern she has to have a democratic legitimacy that leaves behind the ghosts of post-fascism and places her clearly in Europe.

Meloni’s right wants to renew its ideological space and also disputes the vote of the working class with the left. It is no coincidence that the end of the congress, to be held this Sunday, coincided with May Day, Labor Day and a highly symbolic day in Italy. “Well, it’s a coincidence. But the worker’s party is not the heritage of the left. Moreover, the right does more for them today than the left. They are subsidy; we work”, says Crosetto. The expansion of the Brothers of Italy battlefield is now complete. So much so that Meloni had no qualms on Friday about displaying photos of symbols of anti-fascism, such as the director and writer Pier Paolo Pasolini and the philosopher Hannah Arendt as referents of the party.

A party born from the ashes of the Berlusconi project

The origin of Brothers of Italy can be found in the collapse of Berlusconi’s projects. The Cavaliere he had founded a political conglomerate known as Popolo della Libertà (PDL) with which he had managed to govern Italy by uniting the right, including Gianfranco Fini’s National Alliance. This party had juggled to explicitly renounce fascism, but nostalgics survived within it, keeping the flame intact along with another spectrum closer to Christian democracy. A social right and a more liberal one.

With the arrival in 2011 of the technical government of Mario Monti and the support of the PDL —as has now happened with the unity government of Mario Draghi—, a group from that universe decided to found a new device. They called it Brothers of Italy, the unofficial name of the country’s anthem, and placed a young woman who had already been a minister under Berlusconi at the helm. The owner of Mediaset called her “spinning top”, in a sample of her classic elitist macho contempt. But today Berlusconi has to accept his dictate.

Meloni grew slowly, without abusing the ultra strategy of social networks and selfies. She sought coherence and connection with a more rigid and politicized electorate, just as she did in Europe. Today she is the president of the group Party of European Conservatives and Reformists, of which Vox is also a member. The ultra-Spanish party approached the Brothers of Italy, where she found a clearer line than with Salvini, especially on regional and regional issues (the League always favored Catalan independence). “People want clarity, not opportunism. We don’t say one thing and the opposite the next day. And Giorgia has shown it on every occasion,” says a deputy and senior party official who participated with Meloni in its founding in 2011.

Ukraine: One in four Ukrainians has fled their home because of the war | International
March 30, 2022

Ukraine: One in four Ukrainians has fled their home because of the war | International

The Russian threat breaks another taboo: Denmark votes in a referendum if it joins the EU’s defense policy | International
June 1, 2022

The Russian threat breaks another taboo: Denmark votes in a referendum if it joins the EU’s defense policy | International

The Swedish Parliament elects the conservative Kristersson as prime minister with the votes of the extreme right | International
October 17, 2022

The Ukrainian army approaches the city of Kherson with hardly any Russian resistance | International
October 5, 2022

The prosecution drops the charges against Adnan Syed, the protagonist of ‘Serial’ | International
October 12, 2022

The prosecution drops the charges against Adnan Syed, the protagonist of ‘Serial’ | International