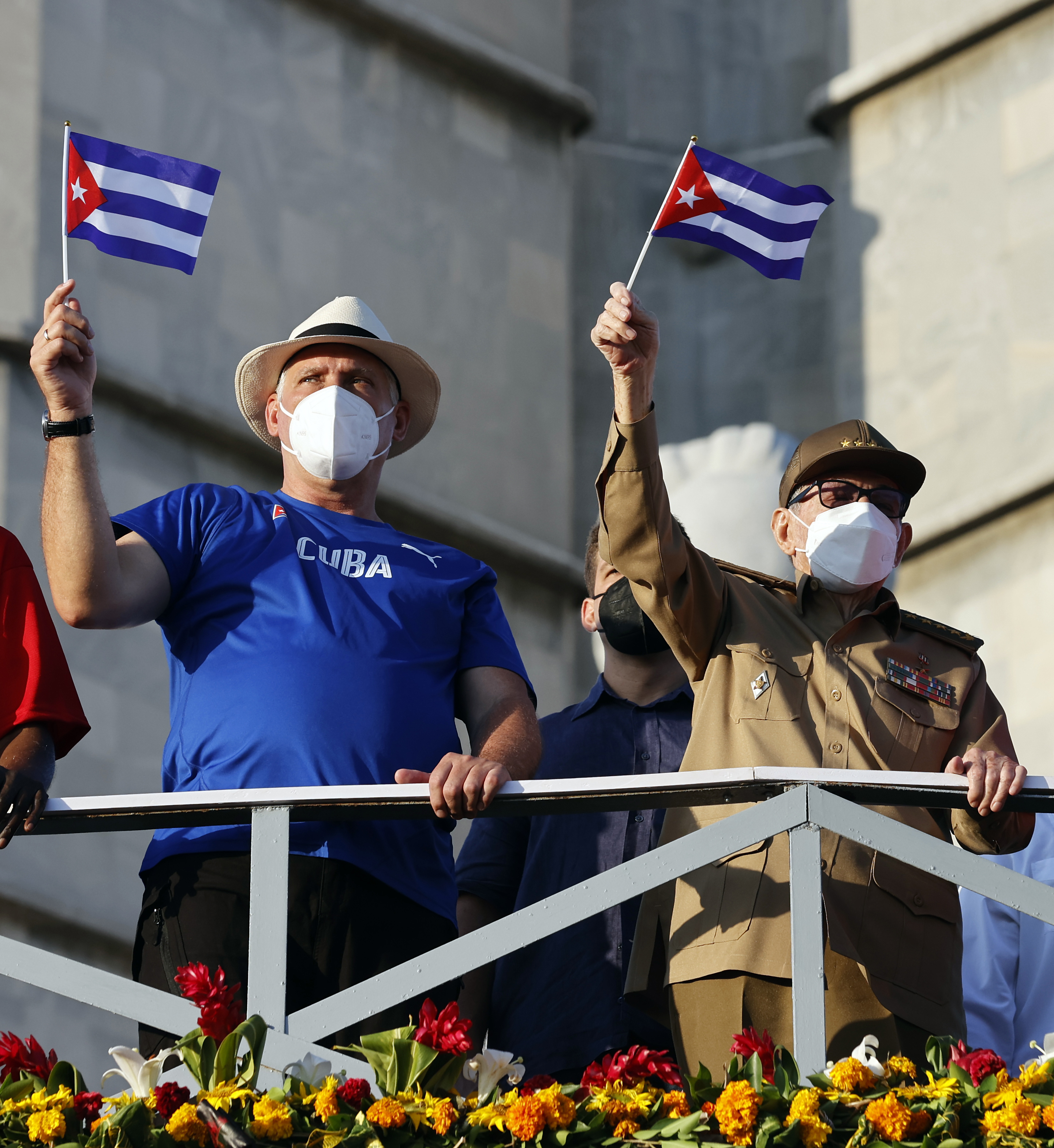 Summoned by the Government “in support of socialism and the revolution,” hundreds of thousands of Cubans paraded this May Day through the country’s main cities and squares, marking a return to massive mobilizations on the island after two years of pandemic. The march in Havana, the largest of all, was led by the former Cuban president, Raúl Castro, and the president, Miguel Díaz-Canel, who in the days prior to the meeting asked the Cubans to demonstrate in the key of resistance. “The Plaza de la Revolución José Martí can be and will be the most beautiful painting of an epic that already has 63 years of non-passive, non-accommodating, non-defeatist resistance. Let’s paint then, together, the landscape of unity and continuity. The landscape of a revolution in power. We are going with everything to this May Day,” said Díaz-Canel.

With this imaginary at the heart of the call, the reappearance of Raúl Castro in the Plaza de la Revolución dressed in the uniform of an army general was also a symbol of the importance given this year to the massive act for Workers’ Day. The last time Castro appeared in a public street celebration was last summer, days after the historic protests that shook Cuba on July 11 and 12, to which the government responded with an “act of revolutionary reaffirmation.”

Although the protests were only touched on in the official speeches this May 1, it was clear that for the authorities this Sunday it was important to show muscle and organize a great mass act in support of the revolution and against the US embargo policy. . The presenter of the parade on television said it clearly before starting: the march represented a “show of support for the socialist project that Cubans have freely chosen” and also a strong message “to internal and external enemies.”

Ulises Guilarte, the general secretary of the Cuban Workers Central, the only one in the country, was in charge of delivering the central speech minutes before the parade began. He considered that the “growing hostility” of the United States and the “strengthening of the blockade” were the “main obstacle” that the country faced in moving forward, spoke of the economic deterioration and the inflationary process that the island is suffering, which is at the base of the malaise that jelled in the protests of 11-J, and assured that this harsh panorama is manipulated by the US to try to create “a matrix of contrary opinion” in the population and divide the people from their leaders.

“Cuba lives and works from creative resistance,” Guilarte emphasized, later highlighting the presence of more than a thousand delegates from dozens of foreign trade union organizations as a sign that “Cuba is not alone,” at a time when Washington “seeks to exclude” to his country from the IX Summit of the Americas, convened by Joe Biden between June 6 and 10 in the city of Los Angeles. This is one of the main diplomatic battles in Havana today.

The march was also conceived as a great tribute to the health professionals who have faced the Covid-19 pandemic in the last two years and to the Cuban scientists who have managed to create several of their own vaccines, with which 100% have already been immunized. % of the population. “The intelligence, creativity, courage, dedication, dedication of our scientific community and of all our health personnel and our people went over all obstacles and saved our lives,” Díaz-Canel said days before, after celebrating the return to the old days of massive mobilizations, read by Havana as an expression of “majority support for the revolution” and a party of resistance. “This small country, without great resources and with a genocidal blockade and brutal financial persecution, has jumped over its own limitations, shortages and uncertainties, to achieve what other nations with greater resources could not achieve,” said Díaz-Canel. before the leadership of the Communist Party when calling the parade on May 1.

Beto O’Rourke: The Democratic Hope in the Closest Race for Texas | International

Trump and Pence stage the division of the Republican Party in Arizona | International
July 23, 2022

Video analysis | “Daniel Ortega remains in power under repression and without the possibility of a change in Nicaragua” | International
March 28, 2022

An eight-year-old migrant girl drowns in the Rio Grande
August 24, 2022

Anti-gun protests in the United States: “We only aspire to survive high school” | International
June 12, 2022

Anti-gun protests in the United States: “We only aspire to survive high school” | International

United States Launches a Proposal to Fight Climate Change at the Summit of the Americas | International
June 10, 2022

Hong Kong Appoints Current Security Chief As New Leader In Elections Without Other Candidates | International
May 8, 2022

Argentina: Kirchnerism shakes up its fight with President Fernández with a large demonstration on the anniversary of the military coup | International
March 25, 2022

Argentina: Kirchnerism shakes up its fight with President Fernández with a large demonstration on the anniversary of the military coup | International