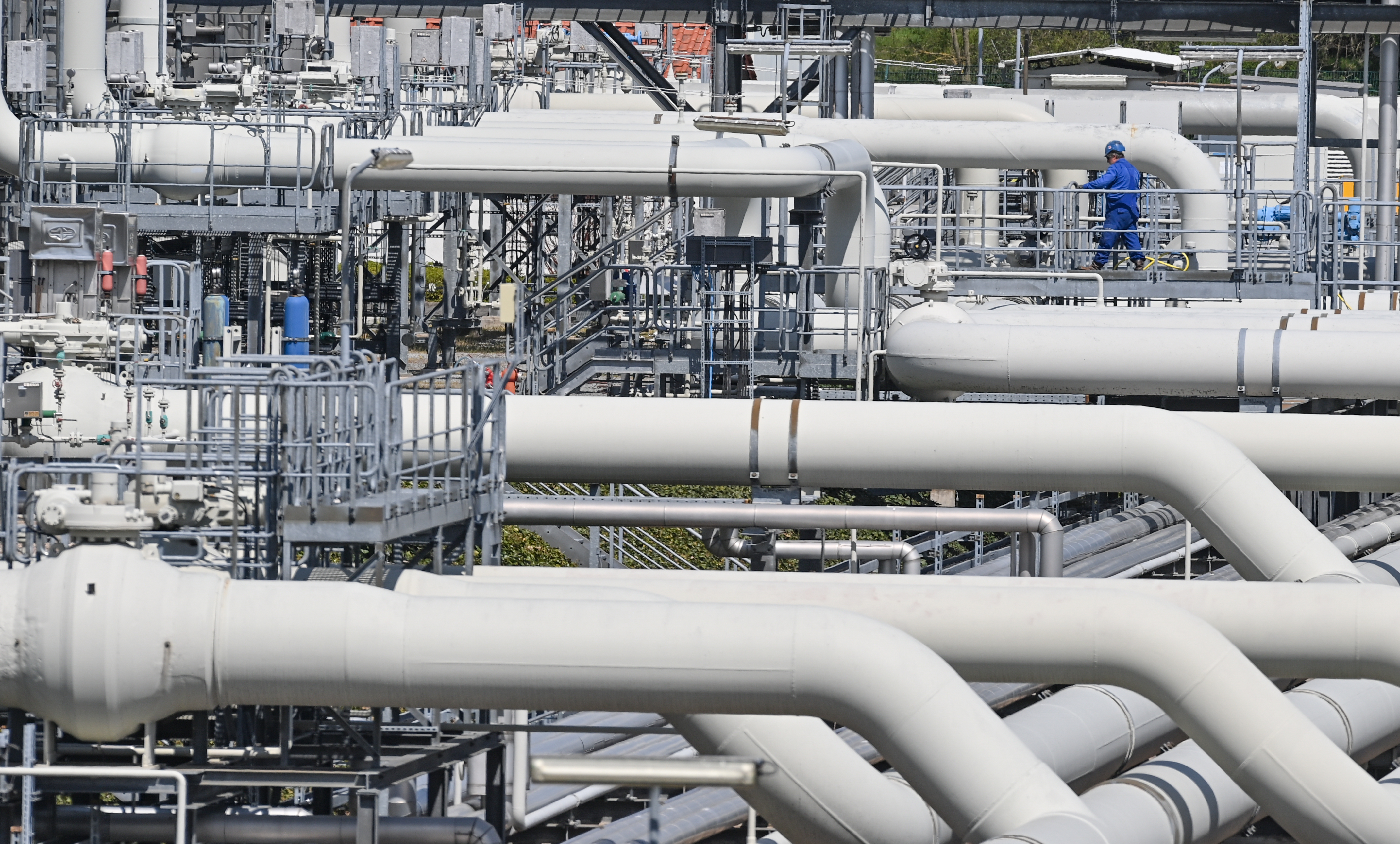 Gas has become the conduit that gauges the tense relationship between Russia and the EU, a double-edged sword that is at the same time an economic weapon in the hands of Brussels – capable of dealing a fatal blow to the Kremlin’s coffers if the EU decides its embargo—and, at the same time, a blackmail lever from Moscow, owner and lord of the flows of this fuel to the Twenty-seven. This week its crude potential has been seen: the Russian energy giant Gazprom decreed on Wednesday the cut off of supplies to Poland and Bulgaria for their refusal to pay in rubles.

The closure has set off alarms in Brussels, bringing the abyss of a possible scenario of total rupture, energy cuts and rationing a little closer. The decision has also deepened the political rifts between the EU capitals more or less likely to pay in Russian currency – Moscow’s ultimate goal, according to fears in the Community Executive – and has returned the debate on how to break energy ties with Russia and put an end to imports, which generate billions with which the Kremlin finances its war machine in Ukraine. Brussels finalizes the sanctions on the import of Russian oil, a package that would already be ripe to put on the table this week, according to community sources. Faced with a scenario of gas cuts by Russia, Brussels wants to respond with a blow where it hurts the most.

Why has Gazprom cut off supplies only to Poland and Bulgaria?

These two countries have refused to follow the mechanism unilaterally imposed by Moscow for Gazprom clients to pay in rubles; This formula, decreed on March 31, requires the client to open two accounts at Gazprombank: one in dollars or euros; the other in rubles. But this second account would imply violating the sanctions imposed on Moscow, according to community sources.

Are these two countries guaranteed supply?

Poland and Bulgaria have so far received 50% and 75%, respectively, of their gas imports from Russia. Both community partners have assured that they are prepared to deal with the supply in the coming months. Polish reserves are at 76%, which covers its demand for the next two months, it has alternative sources from neighboring countries, and it expects to open a connection with Norway shortly. The case of Bulgaria is somewhat more complicated: it has 17% reserves, like for a month of consumption.

What has Brussels proposed to help Sofia?

The European Commission announced on Thursday that it was launching a regional working group in Bulgaria, a kind of pilot system for its joint gas purchasing scheme, a platform created in the heat of the energy crisis. This group “will study the needs, prices and flows of gas and electricity, as well as aspects related to infrastructure”, according to the Community Executive.

Are other countries at risk of a supply cut?

It’s possible. The scheme that Russia demands unilaterally for the payment of gas in rubles leaves a wide margin of action to Gazprom to decree the cuts. In the Community Executive they believe that the Kremlin has turned it into a tool of political blackmail, which the Russian president, Vladimir Putin, can use at his discretion to divide the Twenty-seven.

What does Brussels think?

After the cut to two countries, the European Commission clearly sees where the situation is heading: there is a high risk of more cuts and the EU could move towards a scenario of energy rationing. Brussels hopes that Gazprom decides to play with the cuts in the countries where it can do more damage: in those that are more belligerent against Moscow (such as Poland) or where it can generate greater internal division (such as Bulgaria).

The Oxford Institute for Energy Studies also warns of a scenario of gas cuts in the EU: “An interruption of supply in response to the perception of a breach of the regulations stipulated by the decree [ruso que obliga a pagar en rublos] it is, therefore, eminently possible already in May (when payments for April gas supplies must be executed)”, concludes in a recent analysis.

Is the EU prepared for such a scenario?

The Twenty-Seven have drawn up specific contingency plans in recent months to deal with partial and total cuts in gas supply from Russia. These programs have been drawn up by each Member State, in coordination with the so-called regional risk groups (groups of countries with similar supplies). Brussels has an ultimate role of coordination and supervision. These days the dossiers are fuming on the table of Commission officials.

How can the EU cover gas cuts?

Brussels believes that it can face a scenario of immediate cuts, but it is fearful of next winter: the reserves begin to fill up just these next few weeks. The EU has been negotiating for months with suppliers from around the world, such as the United States, Norway, Azerbaijan and Qatar, to increase the flow of Liquefied Natural Gas (LNG) and pipeline gas for storage.

How much gas can the United States offer?

President Joe Biden promised during his visit to Brussels in March to increase the supply of LNG to the EU by almost 70%, but the amount is far from offsetting Russian gas imports. A high-level delegation from the Commission visited Washington this week to review the evolution of “the diversification of supply to Europe”, according to a statement from the EU Executive.

Have gas sanctions already been imposed?

No. The EU has not yet imposed retaliation of any kind on Russian gas purchases. The debate has been open for weeks, but in none of the five sanction packages approved so far is there any punishment for gas or oil. An energy embargo also has the explicit veto of Hungary, which further complicates its approval.

Are there penalties for fuels from Russia?

Yes. In the latest package of sanctions, the EU vetoed purchases of Russian coal, imports that reach some 4.2 billion euros a year, far from the 42 billion that are spent on oil.

For when an embargo on oil?

Community sources anticipate that the package of sanctions on Russian crude will be put on the table next week. The package is already mature and would be a forceful response to the gas cuts that Gazprom could decree.

How much money has the EU paid to Russia since the war started?

The thinktank The environmentalist Center for Research on Energy and Clean Air (CREA) has published this week a study, with a built-in calculator, that raises the money that Russia has received for the three fuels (oil, gas and coal) to around 50,000 million euros. .

How much gas does the EU import?

How much money is it?

In years with lower prices, the value of what is bought from Moscow in gas amounts to 28.4 billion. Higher is the oil bill, 42,000 million, according to CREA. Despite these figures, Europe depends more on gas than on crude oil from Moscow: this accounts for 25% of total oil imports.

Which countries are most dependent on Russian gas?

To answer this question, we must look at two indicators: the level of Russian gas imports and the dependence on this fuel to produce energy. Looking only at the first indicator can be misleading. For example, Estonia or Finland import 100% of the gas they consume from Russia; instead, with it they only produce 9% and 3% of their energy, respectively. Hence, it can be said that the supply cut in these cases is very manageable.

Nor in Bulgaria is it dramatic, for the moment. 99% of the gas it consumes is Russian, but it uses it to produce 12% of its energy. In Germany, the situation is already more complicated: it buys 54% of the gas it consumes from Russia, but its dependence on this fossil fuel to generate energy is 27%. In Italy the ratio remains at 33% and 31%, respectively.

How much gas does the EU have in storage?

At the end of winter, the season of the year in which more gas is consumed, in the community warehouses there are reserves of 32% of a total capacity of 132,000 million cubic meters, according to data this week from the employers’ association of companies dedicated to reserves. That means that there is an amount available at 8.9% of annual consumption.

Does it affect the Twenty-seven equally?

Not all countries have the same level of provisioning. While Poland has gas to cover 11% of its annual demand, Bulgaria barely reaches 3%. In the cases of Spain and Portugal, their reserves are enough to cover almost 6% and 4% of their annual needs. In contrast, Germany reaches up to 8.85%. The country with the greatest autonomy to resist a Russian gas cut is Latvia, with more than 60% of its demand covered. Far above the next, Austria (17%).

The first big snowfall in Ukraine freezes citizens: “We don’t even have firewood to face the winter” | International

Check Also
Close
The Venezuelan government and the opposition agree to unfreeze between 3,000 and 5,000 million state funds abroad
26 mins ago

Greater Toronto: Hazel McCallion, an icon of Canadian politics, renews her employment contract at the age of 101 | International

The activist who gives voice to those repressed in Russia: “In the country there is a dictatorship in which everything is prohibited” | International
March 30, 2022

The activist who gives voice to those repressed in Russia: “In the country there is a dictatorship in which everything is prohibited” | International

Macron, Sánchez and Costa agree to a meeting in Paris to advance on MidCat | International
October 7, 2022

Macron, Sánchez and Costa agree to a meeting in Paris to advance on MidCat | International

Borodianka: Ukraine warns that the Russian withdrawal reveals massacres greater than that of Bucha | International
April 8, 2022

Borodianka: Ukraine warns that the Russian withdrawal reveals massacres greater than that of Bucha | International

An Italian tourist dies after a shark attack on the Island of San Andrés, in the Colombian Caribbean | International
March 19, 2022

An Italian tourist dies after a shark attack on the Island of San Andrés, in the Colombian Caribbean | International