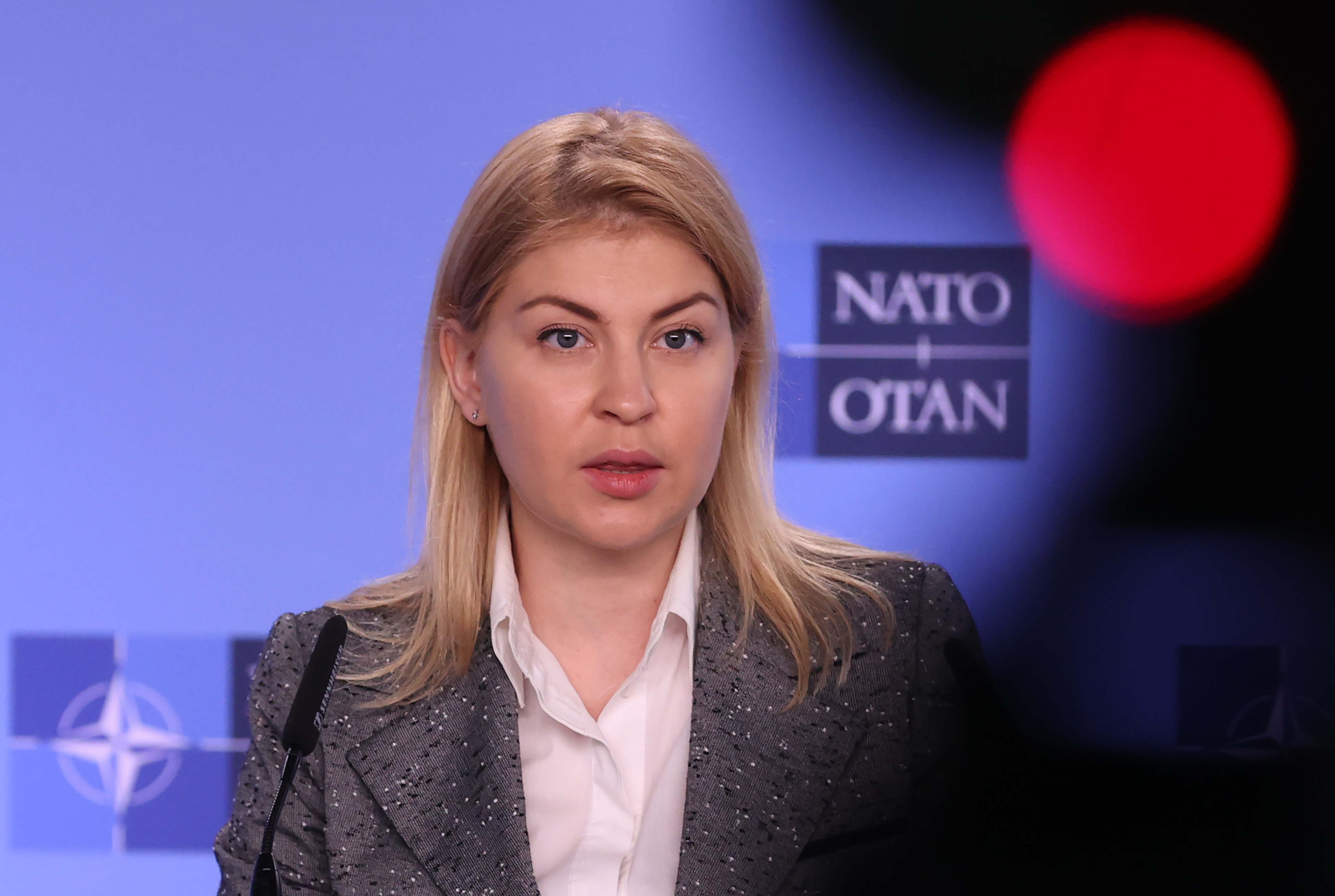 Four days after Vladimir Putin launched the invasion of Ukraine, President Volodymyr Zelensky signed the petition for accession to the European Union, consecrating the intentions of the former Soviet republic. Now, when the war started by Russia has lasted more than two months and the fighting rages in the east in a battle that may drag on and end up moving away from the spotlight of Western attention, the Ukrainian government is striving to pave the community road and secure the support of the Twenty-seven.

“Ukraine’s two priorities are the overwhelming and unconditional victory in the war and returning to the European family, joining the EU,” the Ukrainian Deputy Prime Minister for European and Euro-Atlantic Integration, Olha Stefanishyna, told EL PAÍS in an interview. via videoconference after long days accompanying world leaders —such as the President of the Spanish Government, Pedro Sánchez— on their trip to the Ukrainian capital, visits that Stefanishyna considers key to showing a “deeper commitment” of these countries with the Ukrainian agenda.

Stefanishyna (Odessa, 36 years old) explains that Ukraine is ready to take the next steps towards its candidacy. The country has already completed the first part of the questionnaire to become a member of the EU and will submit the second part later this week. “Geopolitical architecture goes far beyond Ukrainian aspirations. It is part of a larger picture. It is already clear to everyone that without Ukraine this kind of future architecture will not be possible,” she notes.

He hopes that the European Commission will recommend granting the candidate status for Ukraine and that the leaders will make the decision in June. “Making this decision would not require additional legal obligations from EU leaders. It will be just the beginning of the road, but it would be a clear sign that Ukraine will prevail when the war is over.”

The timetable for Ukraine has two main tracks, explains Stefanishyna: the membership track and the financial track, which not only includes sanctions against Russia, but also funding to rebuild Ukraine, a task in which the EU “has taken a clear lead. ”. The deputy prime minister points out that it is key for the country that the sanctions be continuous and “as tough as possible.” “The stronger they are, the more pressure they put on Russia and the less power they will have. [el Kremlin] to continue the war.” He assures that, according to calculations by Ukraine and the world’s four largest consulting firms, even in the case of total financial and economic isolation, Russia could still manage the country with its reserves for six to eight months. “We must calculate by adding that time to the toughest sanctions,” remarks the head of Euro-Atlantic Integration.

Stefanishyna stresses that the gradual imposition of sanctions on Russian oil and gas is also a very important step. “And it’s really a political step,” she says. “We understand that it weighs down national economies. But even so, their confidence will remain strong, the economies prosperous and sustainable. While our country and our economy have been destroyed, our people are being killed. So it’s important that tough action is taken, but it’s even more important to make sure that all the sanctions that have already been imposed are enforced,” she says. And it is impossible to avoid them.

On the relationship of the different EU countries with Russia and its energy policy, the deputy prime minister is clear. “This is really about political leadership. Now, when it comes to Russia, there is no room for tactical decisions. Paying in rubles, or refusing or not gasoline or other contractual issues, are tactical things. And this is exactly what the Russians need and what they do,” she notes. “None of the decisions regarding Russia can be based on tactical issues. They all have to be strategic”, says the Ukrainian head of the European agenda. “Every time we hear statements from European leaders about making the decision to pay [a Rusia] in rubles or not being prepared to refuse their gas, we treat it as a tactical loss, because strategically they cannot say that Russia is an aggressor, that there is a war or all the unimaginable crimes committed for more than 60 days on the territory of a state European,” he says. “For Ukraine, clarity is important. We understand that Russian gas is sponsoring the war against Ukraine, so it is important that this decision is made in time. We see that there is consensus, but we would like that decision to be made sooner and with fewer negative messages about the impossibility of making these decisions”.

Russia’s war against Ukraine and NATO’s response, and its refusal to create a no-fly zone in the country to prevent bombing, has raised enormous criticism in Ukrainian society towards the Atlantic Alliance and has generated disappointment. A few weeks ago, President Zelensky said that NATO is not ready for Ukraine and Stefanishyna considers that the Ukrainian leader has “every right to be critical”. “NATO’s messages on Ukraine have been a bit frustrating, and of course we expected more. It is frustrating that a country that has enshrined in its Constitution the aspirations to join NATO, that has been implementing NATO-oriented national programs and has transformed the security and defense sector based on NATO standards, has always listened the message that the point has not been reached. Or ‘we are not going to make this decision’, he abounds. “We hear the constant message that they don’t want to anger Russia when there is war in my country, and thousands of civilians have been killed. That frustrates much of society,” she insists.

In its proposals for negotiations with Russia, Ukraine has been open to putting aside its intention to join NATO, in exchange for signing that other countries provide Ukraine with security guarantees on a bilateral basis. Despite this, Stefanishyna insists, Ukraine “has not abandoned or postponed” the intention of joining the Atlantic Alliance, of which Spain is also a member, which will host its summit in June. The head of Euro-Atlantic Integration criticizes the “hesitation” of the Alliance in accepting Ukraine —which received the invitation in 2008, at the Bucharest summit—. Hesitancy, she says, that has led to “lousy situations” like the 2008 Georgia war, the 2014 Ukraine war and the current one. “That hesitation has gotten Putin to where he is now,” she remarks. Stefanishyna assures that there is a lesson to be learned from the situation in Ukraine. Sweden and Finland [que estudian ahora unirse a la alianza militar] they will become members of NATO as soon as possible. But I can also guarantee that if these countries waited another 15 years for their membership decision, they too would be in a state of war.”

Regarding the talks with Russia, Stefanishyna explains that they are developing “at a technical level”, but that every time “there is a smaller window” on the path of dialogue. Above all, she points to Russia’s behavior on Mariupol, the evacuation of people, the massive bombing, the inhumane treatment. And also for the bombing against kyiv in the middle of a visit by the UN Secretary General, Antonio Guterres.

With the second phase of Russia’s war against Ukraine focused on the Donbas area in the east of the country, Stefanishyna points out that the conflict is getting tougher and that Russia has learned the lesson from Bucha (one of the scenarios of the horrors of the Kremlin troops against the civilian population) and other areas and assures that he is doing a job to “hide his crimes”. “What they have not learned is that nothing can be hidden from the Ukrainian people and that we live in a free country. And this is not Russia. We don’t care if we have a tank in front of our heads. We have to make sure the whole world knows about the victims, about each and every civilian in our country. So they can never hide anything, no matter how hard they try.”

The infiltrated spies with which China deceived the world | International

María Nela Prada: The Minister of the Presidency of Bolivia: “The organized people are invincible, beyond the economic power of the fascist right” | International
July 1, 2022

María Nela Prada: The Minister of the Presidency of Bolivia: “The organized people are invincible, beyond the economic power of the fascist right” | International

‘Novaya Gazeta’, the last independent Russian newspaper, suspends its publication until the end of the war in Ukraine | International
March 28, 2022

‘Novaya Gazeta’, the last independent Russian newspaper, suspends its publication until the end of the war in Ukraine | International

Refugees from Afghanistan in Spain: “My body is in Salamanca, but my head is still in Kabul” | International
August 7, 2022

Refugees from Afghanistan in Spain: “My body is in Salamanca, but my head is still in Kabul” | International

France withdraws its last soldiers from Mali as it redefines its African strategy | International
August 16, 2022