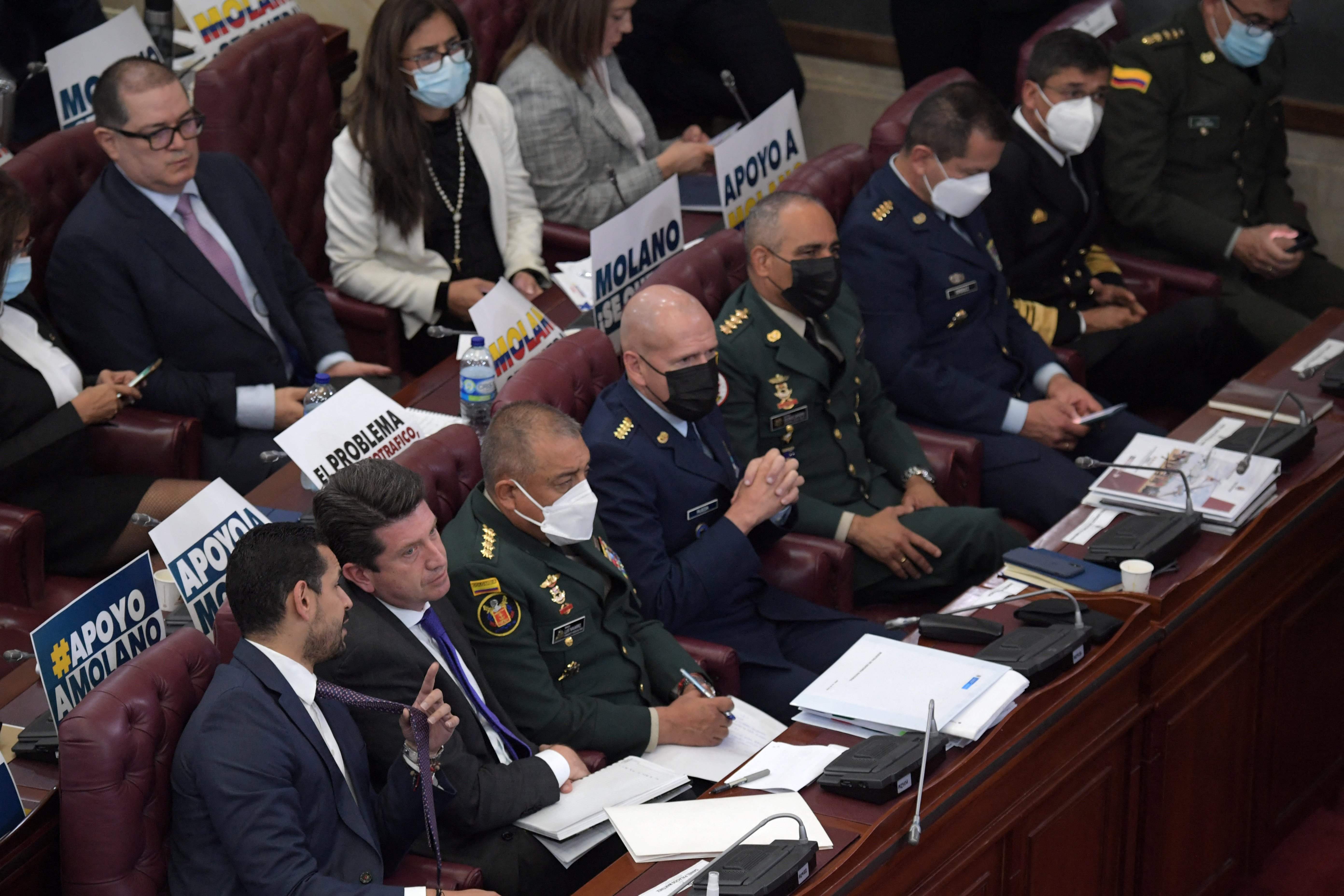 Defense Minister Diego Molano has saved his post for the third time. Less than a month before the presidential elections in Colombia, the minister faced a possible motion of censure this Wednesday: Congress could remove the official from his post for his actions in the face of an alarming complaint in the armed forces. At the end of March, the Army was accused of carrying out a military operation in which 11 people died, several of them civilians, including a minor and a pregnant woman.

But the House of Representatives, in charge of the vote, overwhelmingly supported Molano: 116 votes in favor of the official, and only 28 votes against. Congressmen from the government party, Centro Democrático, and his allies in the Conservative Party, La U and Cambio Radical, voted in favor of the minister. Congressmen from the left and the Green Party voted against. The Liberal Party caucus, as in the elections, was divided between the two poles. A few days before choosing who will be the president of Colombia, the censure of the minister would have been interpreted as a victory for the opposition (led by the favorite in the polls, Gustavo Petro, from the left) and a defeat for the ruling party (represented by Fico Gutierrez, from right).

This is the second motion of censure that the minister has passed. In March 2021, he was questioned after the Army bombed a guerrilla dissident camp, despite the fact that there were minors there. “The discussion here is not about the legitimacy of our security forces to carry out these operations,” he said then, “but how the FARC dissidents continue to recruit these young people.” Do not then there were majorities to call a motion of censorship for the facts. yes it prospered later another motion, in May and June 2021, when Molano was questioned for multiple abuses by the public force against demonstrators during the protests in April. Molano managed to most congressmen will support you with 109 votes in favor and 36 against, in the House of Representatives (The Senate also voted on that occasion: 69 votes in favor of the minister, 31 against).

This latest scandal in which he is involved started in March in a village called Alto Remanso, located in the department of Putumayo, in the south of the country. The Government then presented the deaths as dissidents of the extinct FARC guerrilla and added that they had captured some people. But little by little inconsistencies with that version came out. The Prosecutor’s Office clarified that there were no arrests. The Ombudsman’s Office said civilians were among the dead. The IACHR and the UN demanded that the Government investigate why a military operation was launched at a party where there were children and women. And the reports from the area began to raise doubts as to whether the Army was hiding something more serious.

For example, the Army suspiciously presented the body of one of the dead, a minor named Brayan Santiago Pama. Photographs reveal that the soldiers moved the body from the crime scene on at least two occasions, and installed weapons next to his body. Pablo Panduro Coquinche, an indigenous governor of the Cabildo Kicwa Bajo Remanso, who the authorities presented as one of the dissidents, also died that day. His death alerted the country’s indigenous organizations of which he was a part and which deny the government’s version. Among the dead was also a pregnant woman, Ana María Sarrias. Days after the operation, Army General Eduardo Zapateiro defended himself by saying that this “will not be the first time that a woman and a minor combatant have died.”

The people murdered that day were in a community bazaar, and Minister Molano defended before Congress the version that this was actually an event to traffic drugs. Relatives of the victims, on the other hand, insist that it was a bazaar to raise funds for the town’s expenses. “I have come to tell you that my son was a worker, not a guerrilla, as you have said,” Argemiro Hernández, the father of Divier Hernández, one of the eleven dead, said a week ago in Congress.

The civilians of Alto Remanso are located at the center of a dispute between two armed groups: the Border Commandos and the Carolina Ramírez First Front. This puts them at high risk of being caught in the crossfire or unfairly singled out as armed actors. The Army insists that those killed at the end of March were members of the Border Commandos. The minister says that it was an operation to capture alias ‘Bruno’, a dissident man. Testimonies from people in Putumayo say, instead, that Bruno was not in that bazaar.

“Here no one can have full identification and their relationship with the dissidents,” the minister said last week before Congress when he was questioned for not showing that the dead were all dissidents. The Prosecutor’s Office is the one who must establish this, explained Molano. For now, while the next president is being investigated and decided, Diego Molano will continue in his position.

War in Ukraine: Transnistria looks at itself in the mirror of Crimea | International

Negotiations: Ukraine offers Russia its withdrawal from NATO in exchange for security guarantees on its territory | International

Alfonso Prada: The Minister of the Interior admits that there is a lack of money to protect the lives of “so many people threatened in Colombia”

The complaint against Pedro Castillo deepens the political confrontation and opens an unprecedented chapter in Peru | International
October 12, 2022

Arrested in Mariupol and imprisoned by Russian forces: the 83 days of horror of a Spanish woman | International
July 4, 2022

Arrested in Mariupol and imprisoned by Russian forces: the 83 days of horror of a Spanish woman | International

Hundreds of Puerto Ricans protest against the operator of the electrical network on the island
August 27, 2022

The Polisario clings to the UN self-determination plan after the western drift towards autonomy in Morocco | International
September 5, 2022

Two UN inspectors will stay at the Ukrainian nuclear power plant in Zaporizhia after certifying that it has suffered damage | International
September 2, 2022

Henry Tarrio: The former leader of the Proud Boys, accused of conspiracy in relation to the attack on the Capitol | International
March 9, 2022

Henry Tarrio: The former leader of the Proud Boys, accused of conspiracy in relation to the attack on the Capitol | International