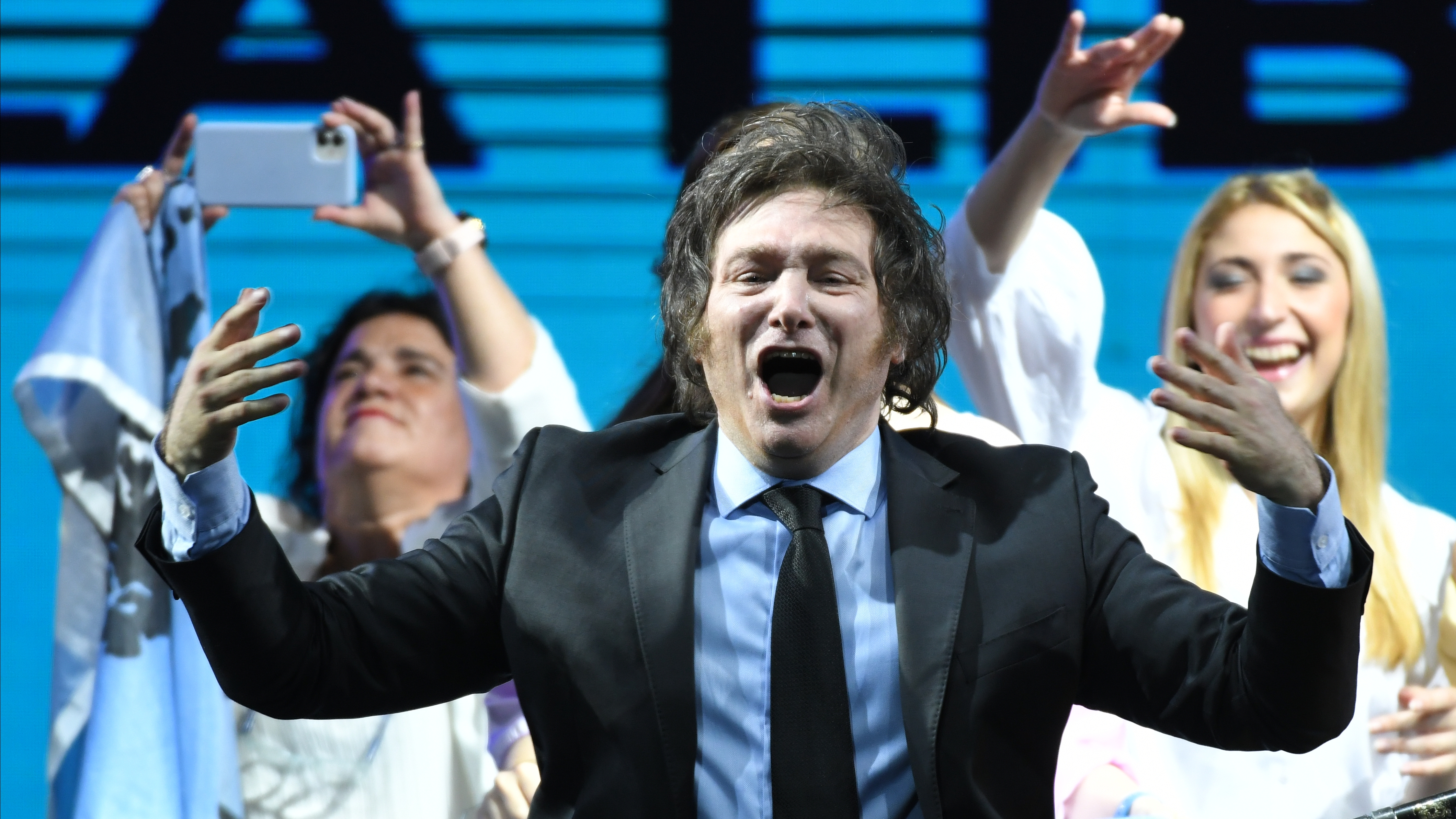 “Hello everyone. I am the lion”: the song by the band La Renga is heard at the rallies of Javier Milei, the Argentine version of the alternative right that travels the world. With an energy and a rock aesthetic and wild hair (he says that the invisible hand of the market combs it), the 51-year-old economist travels the country surrounded by crowds of young people in their twenties who celebrate his harangues against the political “caste” and its threat to remove politicians “to kick their asses”. Some of his followers carry Gadsden flags (a symbol from the United States that includes a snake with the legend “don’t tread on me”), stick the face of Donald Trump on their mobiles and feel that they are leading an anti-collectivist cultural revolution in a “country of lefties (leftists) like Argentina”.

Before launching into politics for the 2021 elections, this mathematical economist -and fleeting ex-goalkeeper for the lower Chacarita club- was already appearing on television talk shows or filling theaters with a monologue on economics. Already on stage, he did not hesitate to give a fuck you to the portrait of the economist John Maynard Keynes, his number 1 ideological enemy. Little by little, Milei grew in popularity outside the radars of political scientists, who despised him for his figure extravagant.

But it is precisely his transgressive eccentricity one of the reasons for his popularity. In the legislative elections of 2021, he obtained 17% in the City of Buenos Aires, with similar percentages in middle, upper and lower neighborhoods, even in the poorest, and thus entered the National Congress. With rock songs from the 90s/2000s such as “the explosion is coming” as the backdrop for his appearances and giving economics classes in the squares, Milei grew thanks to the poor performance of the government of Mauricio Macri, which left room for the emergence of a force to his right.

“Capitalism is resoundingly superior -productively, morally and aesthetically- to socialism”, he repeats as if he were in the middle of the Cold War. And her speeches resonate with something of the heroic capitalism that the Russian American philosopher Ayn Rand embodied in novels such as the best seller Atlas Shrugged, which puts macrismo in an ideological bind. While the “hawks” of Together for Change, such as Mauricio Macri himself or former minister Patricia Bullrich, would like to have Milei as an ally, the “doves” of that center-right alliance, such as the mayor of Buenos Aires Horacio Rodríguez Larreta or the Radical Civic Union, see it as a threat to democracy. (He says that it is a threat, but for “the political caste”). The world, as Rand already said, is a struggle between producers and looting collectivists.

The economist drinks above all from the ideological waters of the American “paleolibertarianism” of Murray Rothbard (1926-1995), a follower of the Austrian school of economics of Mises and Hayek. Paleolibertarians radically reject the State but defend reactionary positions on the social plane. Rothbard differentiated his libertarianism from the anti-authority hippieism of the Libertarian Party of America, which he himself had helped found, and ended up being a right-wing populist avant la lettre.

From these ideological coordinates, Milei can demand the abolition of the State and at the same time vindicate Donald Trump, link up with Jair Bolsonaro and support the Spanish extreme right of Vox. She shares with them a visceral hatred of progressivism.

Sometimes he takes his anti-statism to the limit of the absurd. Like when he said: “Between the mafia and the State, I prefer the mafia. The mafia has codes, the mafia complies, the mafia does not lie, the mafia competes”. Or when he called for the privatization of the streets: “every time I step on a tile, it spits out socialism.” Today he admits that the abolition of the State is not possible in the short term and maintains that, in the meantime, it must be reduced as much as possible. And now he interacts with “the caste” in Congress.

Milei prides herself on having popularized liberalism (“before liberals could fit in an elevator,” she repeats), which is not factually true: in the 1980s and 1990s, there was a liberal-conservative current with ideological influence, even in the movement student. But it is true that Argentine liberalism never had such a disruptive and “anti-system” leadership. Never before has claiming to be on the right been so cool for so many young Argentines as it is today.

One of Milei’s big hits was organizing a monthly raffle for her deputy salary: since she considers that public funds come from theft (taxes), not only can she not collect it, but she can’t donate it either. That’s why he decided to distribute it randomly. Traditional politicians consider it an act of demagoguery but he goes ahead and, to this day, he already has a database of more than two million subscribers who hope to win this unconventional lottery every month.

Eliminate the peso as currency

The pantheon built by Milei may be somewhat curious for those who look at it from the outside: it vindicates liberals from the exporting Argentina of the 19th century (when the Central Bank did not yet exist) but also Carlos Menem, the former Peronist president who in the decade of In 1990, he carried out structural reforms and tied the value of the peso to the dollar by law. Milei directly wants to eliminate the national currency and dollarize the economy. “The peso is the currency of the caste, it is not even useful for payment.”

But beyond his proposals, the economist postulates himself as a sort of liberator of Argentines from slavery at the hands of politicians.

Today the entire country talks about him, for better or for worse, and his image is projected towards Latin America. Every day he accepts dozens of selfies from barely post-teens. And, from the small structure of the Argentine Libertarian Party as a base, he aspires to consolidate himself as a presidential candidate. To do this, he will have to go through a long road that has been mined for a novice politician and try to ensure that his popularity bubble does not burst in the attempt. For now, he continues to shout at the top of his voice: “Long live freedom, damn it,” every time he finishes his speeches and even puts on a bulletproof vest. His latest eccentricity in a country without assassinations.

Pablo Stefanoni is an associate researcher at the Carolina Foundation and author of Has the rebellion turned to the right? (21st Century/Intellectual Key, 2021)

Paul Stefanoni He is a journalist and doctor in History. His latest book is ‘Has the rebellion turned to the right?’

Vera Jourova: “Let’s give Ukraine the possibility of being a candidate to enter the EU as soon as possible” | International

What does it mean for Biden to keep control of the Senate? | International

Chile: Gabriel Boric asks not to use criticism of Venezuela, Cuba or Nicaragua “to take advantage of internal politics” | International

The Buffalo shooting in pictures

The French cement company Lafarge will pay a 778 million fine after admitting that it financed the Islamic State | International
October 18, 2022

Draghi and Meloni seek a quick transition in Italy to comply with the EU | International
September 27, 2022

Boris Johnson resignation: How do you choose a new conservative leader? | International
July 7, 2022

Boris Johnson resignation: How do you choose a new conservative leader? | International

Argentina seizes the Venezuelan cargo plane held in Buenos Aires at the request of the US | International
August 12, 2022

Elon Musk tweets information from a hoax website to talk about the attack on Pelosi | International
October 30, 2022

Macron remodels his Government a month and a half after constituting it | International
July 4, 2022

“Venezuela got it fixed”: the mirage that haunts the national conscience | International
May 10, 2022

“Venezuela got it fixed”: the mirage that haunts the national conscience | International