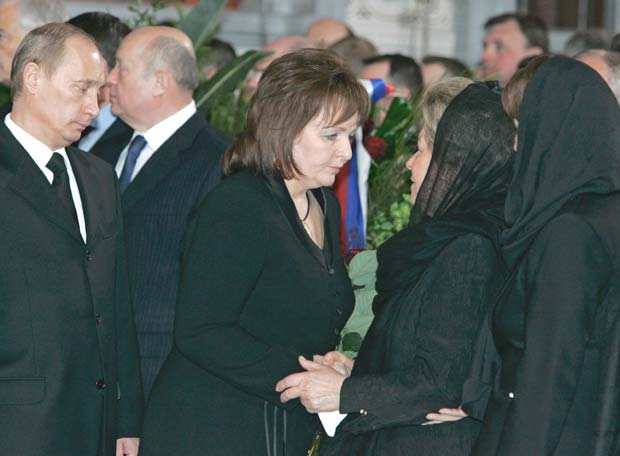 The fastest way to reduce Vladimir Putin’s “luxurious lifestyle” is to go for the “clique” that surrounds him, the United Kingdom Government explained this Friday when announcing a new battery of economic sanctions, which will include the ex-wife of the Russian president, her lover, and a group of relatives. Putin has been linked, through different information, with a yacht valued at more than 650 million euros, or a palace on the Black Sea coast with a cost of almost 1,200 million, although its official owner is Arkady Rotenberg, who already was sanctioned by the British authorities in December 2020.

“Putin’s officially declared wealth is modest, and his lifestyle is financed by a cabal of family, friends and members of the elite. [rusa]”, explains the statement that has announced the names and positions of the new sanctions. According to Kremlin documents, the British Foreign Office says, the Russian president owns a small apartment in St. Petersburg, two Soviet-era cars and a small garage.

The ex-wife of the Russian leader, Liudmila Ocheretnaya, divorced him in 2014. They share two daughters, Maria, 37, and Katerina, 35. Their public appearances are very rare, as they were before the marriage fell apart. . Since then, “he has benefited from preferential business relations with public state entities, and has displayed enormous unjustified wealth”, has assured the British Government, which considers Ocheretnaya “a close associate of Putin, who obtains material or financial benefits from this relationship”. Those of her assets accessible to the Johnson Government will be frozen, and she will be placed under a UK travel ban.

“We are gradually pointing out and exposing to the network that from the shadows he has supported Putin’s luxurious lifestyle, and tightening the screw around his inner circle,” British Foreign Secretary Liz Truss said. “We will continue to punish all those who help or are complicit in Putin’s aggression, until Ukraine wins,” she promised. The UK has already imposed sanctions on more than a thousand individuals and some 100 legal entities. The value of the assets frozen to the Russian oligarchs reaches almost 138,000 million euros.

In that “inner circle” that surrounds Putin, who has become the new target of the Boris Johnson government, is also his lover, the Olympic gymnast Alina Kabaeva. She has worked her way up the ranks to become chairman of the board of National Media Group, Russia’s largest private media company. She was a deputy in the Duma, the Russian legislative assembly, for Putin’s United Russia party. Along with her, her grandmother Ana Zatseplina, is also subject to economic sanctions. She has a close link, according to London, with Gennadi Timochenko, a former Putin associate. Zatseplina obtained from Timochenko a luxury apartment in Moscow.

Igor Putin, Mikhail Putin and Roman Putin, all of them businessmen and cousins ​​of the Russian president, are part of the new British list of economic sanctions. Also included is Mikhail Shelomov, second cousin of the leader and owner of the Akcept company, which shares employees with the firm that owns the palace that Putin enjoys.

Finally, friends of the Russian president such as Alexander Plekhov, Mijaíl Klishin, Vladimir Kolbin, or Yuris Shamalov, all of them placed in relevant positions in Russia’s public economic organization chart, will also suffer a freezing of their assets abroad and a restriction of their ability to to travel.

Hijab: The Muslim veil bursts into the electoral campaign in France | International

António Costa and Helena Carreira: Portugal will have the first joint government in its history | International

The collapse of Anne Hidalgo dynamites the pillars of the French Socialist Party | International
April 10, 2022

Israel expands the wall around the West Bank in response to the wave of attacks | International
April 11, 2022

The woman who grows roses 30 kilometers from the war front in Ukraine | International
June 12, 2022

Martín Guzmán: The Argentine Minister of Economy yields to the pressure of Kirchnerism and submits his resignation
July 2, 2022

Martín Guzmán: The Argentine Minister of Economy yields to the pressure of Kirchnerism and submits his resignation

Joel Hernández, on those detained during the social outbreak in Chile: “There are no political prisoners”
June 4, 2022

Joel Hernández, on those detained during the social outbreak in Chile: “There are no political prisoners”