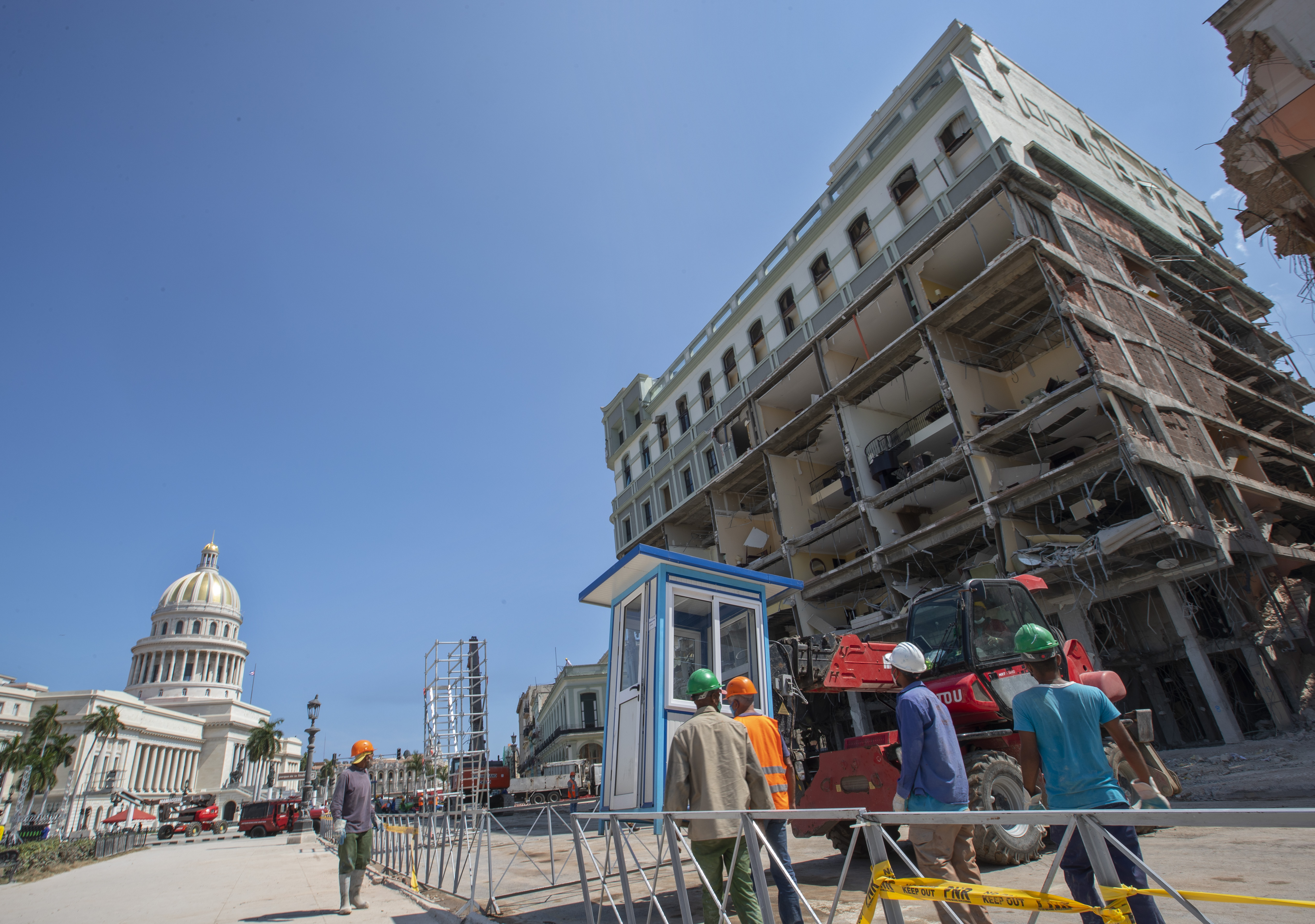 After concluding the rescue and salvage tasks on Thursday, the Cuban government decreed national mourning on the island this Friday and Saturday for the victims of the tragic explosion of the Saratoga hotel in Havana. The balance, after a week of the accident, is terrifying: 46 dead, including four minors, a pregnant woman and a Spanish tourist, in addition to 89 injured, of which 13 are still admitted to hospitals and five are in a critical condition. critical (including two children), so the death toll could grow even more in the coming days. Both the hotel facility and several adjoining buildings have been practically destroyed, and now it is being assessed whether their rehabilitation is viable or whether they should be demolished. The Government convened this Friday a vigil in the Parque de la Fraternidad, in front of the Saratoga, in memory of the victims.

The Saratoga, a 96-room luxury hotel across from the National Capitol in a busy area of ​​the capital, had been closed for two years due to the pandemic and was scheduled to reopen on May 10. The accident occurred while a tanker truck was supplying liquefied gas to the facility and a leak caused the storage tanks to explode. One of the survivors, who worked in the kitchens, said that during supply operations he noticed a crack in one of the hoses through which the gas was escaping, and moments later the explosion occurred, exploding the building’s fuel tanks and caused the collapse of several floors of the six-story building, leaving dozens of people, cars and buses buried under a mountain of rubble that in some places reached almost the height of one floor of the building.

At the time of the accident, 51 employees were working at the hotel, of which at least 24 have lost their lives as a result of the explosion. The search for the bodies of 13 workers, who were buried on the ground floor and in the basement of the establishment, was extremely complex due to the instability of the building. Firefighters spent nearly six days clearing debris before they could find the bodies of those reported missing, said authorities, who have opened an investigation to determine whether the ultimate cause of the accident was due to technical or human error.

The hotel, built at the end of the 19th century and renovated in 2005, was one of the most luxurious in Havana, and music stars such as Mick Jagger, Beyonce and Madonna had stayed in its suites in the past. The consequences of the explosion would have been much greater had it occurred a week later, when the facility had already been open and with tourists. The tragedy occurred on May 6 at around 11 in the morning, local time, when hundreds of people were walking around the Saratoga, in the vicinity of which there are numerous shops and a school, which was affected but in which no accidents occurred. victims. Since the diffusion of the first images, it was appreciated that the damage, human and material, would be immense. The explosion knocked down part of the façade and caused part of the facility to collapse, severely affecting two neighboring residential buildings, and causing damage of varying degrees to another twenty.

The Spanish tourist Cristina López-Cerón Ugarte, 29 years old and a native of Viveiro (Lugo), died in the accident, whose remains have already been repatriated to Galicia. Her boyfriend, César Román Santalla, from Coruña, a year older, is still in serious condition, but after undergoing surgery in a hospital in the Cuban capital, he is stable, conscious and recovering favorably, said consular sources, who reported that his relatives They are with him in Havana.

The government initially assessed the possibility that it was an attack, but the Cuban president himself, Miguel Díaz-Canel, dismissed it shortly after. “It has not been a bomb or an attack, it has been an unfortunate accident,” confirmed the president, who pointed out that the families affected by the damage caused by the explosion have been transferred to “safe places while recovery actions are carried out.” “We are focused on caring for people, the relatives of the deceased and also those who are hospitalized. The work of the health institutions and rescue and rescue teams has been immediate,” said Díaz-Canel, noting that the country was “shocked.”

Yesterday relatives of the fatal victims of the Saratoga attended a mass in their honor at the Havana cathedral. On Wednesday, another gas leak in a private home in Havana caused an explosion that left three injured, a fact that generated even more uncertainty. The authorities reassured the population and asked that anyone who detects the smell of gas in their homes report it immediately. The mayor of Old Havana, Alexis Acosta, reported that, once the rescue tasks have been completed, they are now moving on to the phase of determining the state of the damaged adjoining buildings, including the Martí theater, to undertake the recovery tasks in the cases where this is possible.

Roberto Méndez: “In Chile, a conflict is waged between generations rather than between left and right”
August 6, 2022

Election results: Brazil undertakes the transfer of power from the Bolsonaro government to Lula’s team | International

Brussels launches its grand plan to disconnect from Russian energy | International
May 18, 2022

“Neither left nor right: forward”: this is the third party that wants to end polarization in the US | International
October 10, 2022

“Neither left nor right: forward”: this is the third party that wants to end polarization in the US | International

The electoral victory in Israel depends on the Arab minority: “Our vote is worth the same as that of a Jew” | International
October 29, 2022

The electoral victory in Israel depends on the Arab minority: “Our vote is worth the same as that of a Jew” | International

Liz Truss vows to go ahead with her UK economic plan ‘even if it causes disruption’ | International
October 5, 2022

Rishi Sunak, a politician of Indian origin destined to prevent the collapse of the ‘tories’ | International
October 24, 2022

Rishi Sunak, a politician of Indian origin destined to prevent the collapse of the ‘tories’ | International