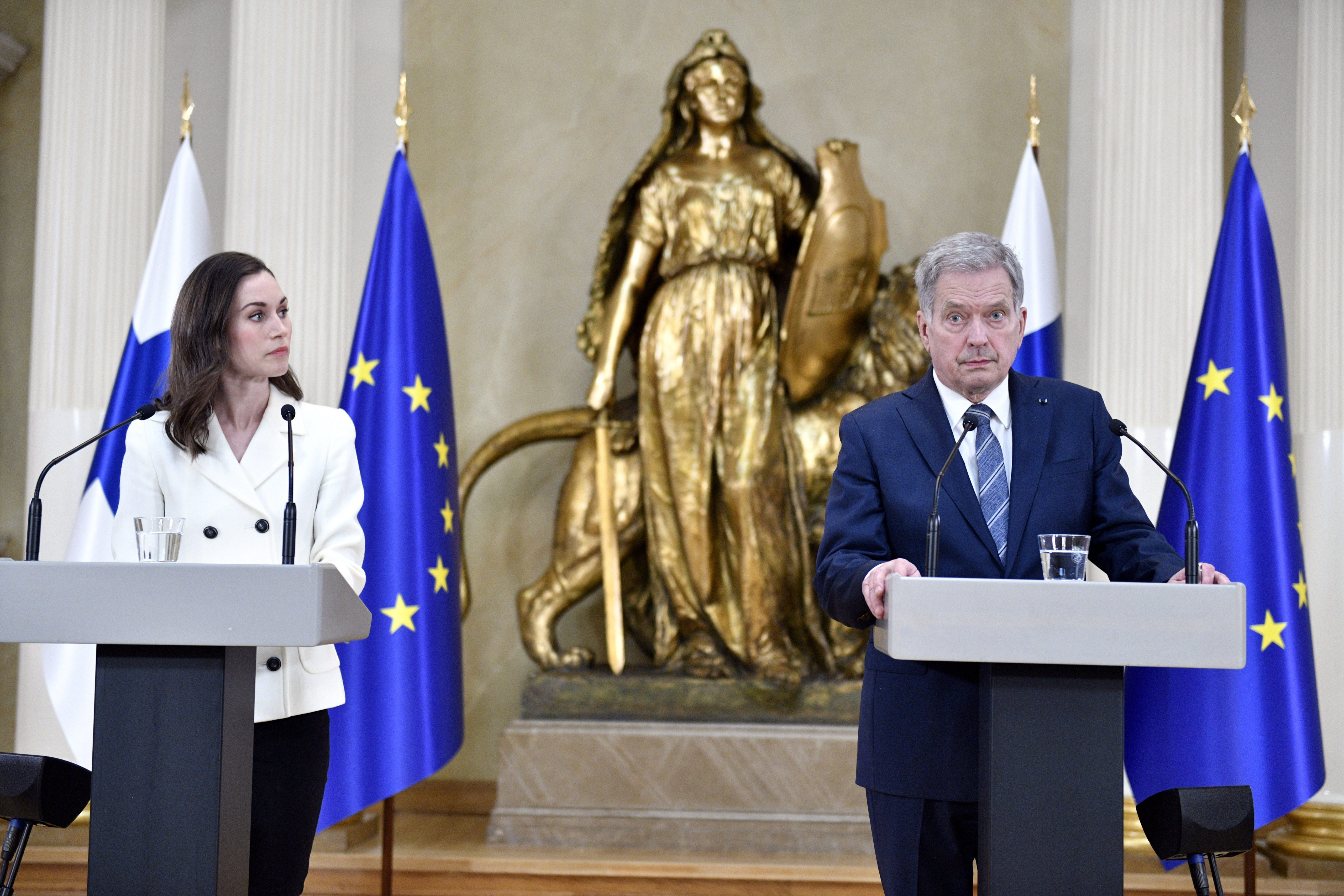 Finland has taken the step before Sweden. The Finnish president, Sauli Niinistö, and the Nordic country’s Foreign and Security Committee have formally approved this Sunday the NATO membership application, the head of state and the prime minister, Sanna Marin, announced at a press conference in Helsinki. “Today is a historic day. We are starting a new era”, Niinistö highlighted. The decision still has to be ratified in the Eduskunta (Parliament) during the next few days, although all the forces of the parliamentary arch have already announced that they will give the green light to entry.

President Niinistö, 73, a member of the National Coalition (Liberals), made the announcement in Finnish, Swedish (co-official language) and English. Social Democrat Marin has expressed her wish for the ratification process to be “as quick and smooth as possible”. This Sunday’s statement comes three days after Niinistö and Marin issued a joint statement in which they personally urged to apply for membership “as soon as possible” to guarantee the security of the Nordic country.

Niinistö, 73, leads the Nordic country’s foreign policy in cooperation with the Executive, as well as being Commander-in-Chief of the Finnish Armed Forces. The Foreign Affairs and Security Committee of the Finnish Executive is made up of the head of government and the ministers of Foreign Affairs, Defense, Finance, Foreign Trade, Justice, Education and the Environment. Marin, 36, leads a coalition government made up of five parties — Social Democrats, Green League, Center Party, Left Alliance and the Swedish People’s Party of Finland —, among which is not the liberal formation of the head of state .

On Monday the debate will start in the Eduskunta to ratify the request. All the Finnish political forces —including the ecologists and the ex-communists, whose sister formations in Stockholm continue to position themselves against the accession of the Scandinavian country— have already announced that they will support integration into the Alliance. The last to do so was precisely the Prime Minister’s Social Democratic Party, which endorsed the entry this Saturday after a meeting of its leadership. However, it is expected that the parliamentary process for ratification could probably last for two days, since, as announced last Thursday by the Foreign Minister, Pekka Haavisto, a member of the Green League, “more than a hundred deputies will want to intervene during the discussion.”

Turkish President Recep Tayyip Erdogan on Friday expressed his disagreement with the accession plans of Finland and Sweden. Niinistö has acknowledged his “confusion” about Ankara’s position and has assured that the Turkish president had been “pleased” and “in favor” of the incorporation in recent weeks. “On Friday we heard something different and on Saturday it was open to incorporation again. We want a clear answer on this and we look forward to talking with Erdogan about the issues he raises,” he added. Turkey’s army is the second largest in the entire Alliance, only behind that of the United States. The process of ratification of Finland’s accession – which requires the approval in Parliament of the 30 members of the Alliance – could take between six and 12 months, according to sources from the organization founded in 1949.

Finland, which shares a border of more than 1,300 kilometers with Russia, has been militarily non-aligned for 75 years. But after the start of the Russian offensive on Ukraine in late February, political consensus and public opinion spiraled in favor of calling for membership. At the end of last year, barely 20% of the Finnish population was in favor of joining the Alliance, but a survey by a public body released last Monday shows that only 11% of citizens today prefer that the Nordic country join stay out of NATO. The change has also been drastic among the political forces: the Social Democrat Marin assured in an interview with this newspaper at the end of January that the possibility of joining the Atlantic Alliance was not an option in the short term.

On Saturday, the Finnish president called his Russian counterpart, Vladimir Putin, to inform him that his country would imminently ask to join the military bloc. Russia has repeatedly warned that there will be “political and military” consequences if Helsinki joins the Atlantic Alliance, although the Kremlin released a statement after the phone call stating that “the end of the traditional policy of military neutrality It would be a mistake, as there is no threat to Finland’s security.” Niinistö stressed this Sunday that “membership in NATO does not change the geography” between the two neighboring countries, and that during his conversation with Putin he urged the Russian president to “maintain in the future” certain aspects of bilateral cooperation that do not have any relation to joining the Atlantic Alliance.

Niinistö and Marin’s announcement puts more pressure on Sweden, which with the entry of Finland would become the only country of all the Nordic and Baltic countries that would remain outside NATO. However, the Swedish Social Democratic Party – winner in all the general elections that the Scandinavian country has held since 1914 – will announce this Sunday if it breaks with its traditional position against integration into the Alliance and gives the green light to accession. In case of doing so, only the ecologists and the ex-communists (who add up to just over 10% of the seats) would be the only two Swedish parliamentary forces that would maintain their refusal to apply for membership. Support for joining the military bloc has also increased in Sweden in recent months, but less strongly than in Finland, and in Stockholm the dissenting voices still sound much stronger than in Helsinki.

From Maria to Fiona: the nightmare of the hurricanes repeats itself in Puerto Rico | International

International rejection of the attack against Cristina Kirchner in Buenos Aires
September 2, 2022

Fear and unease await in the Russian prelude to the war in Ukraine | International
September 18, 2022