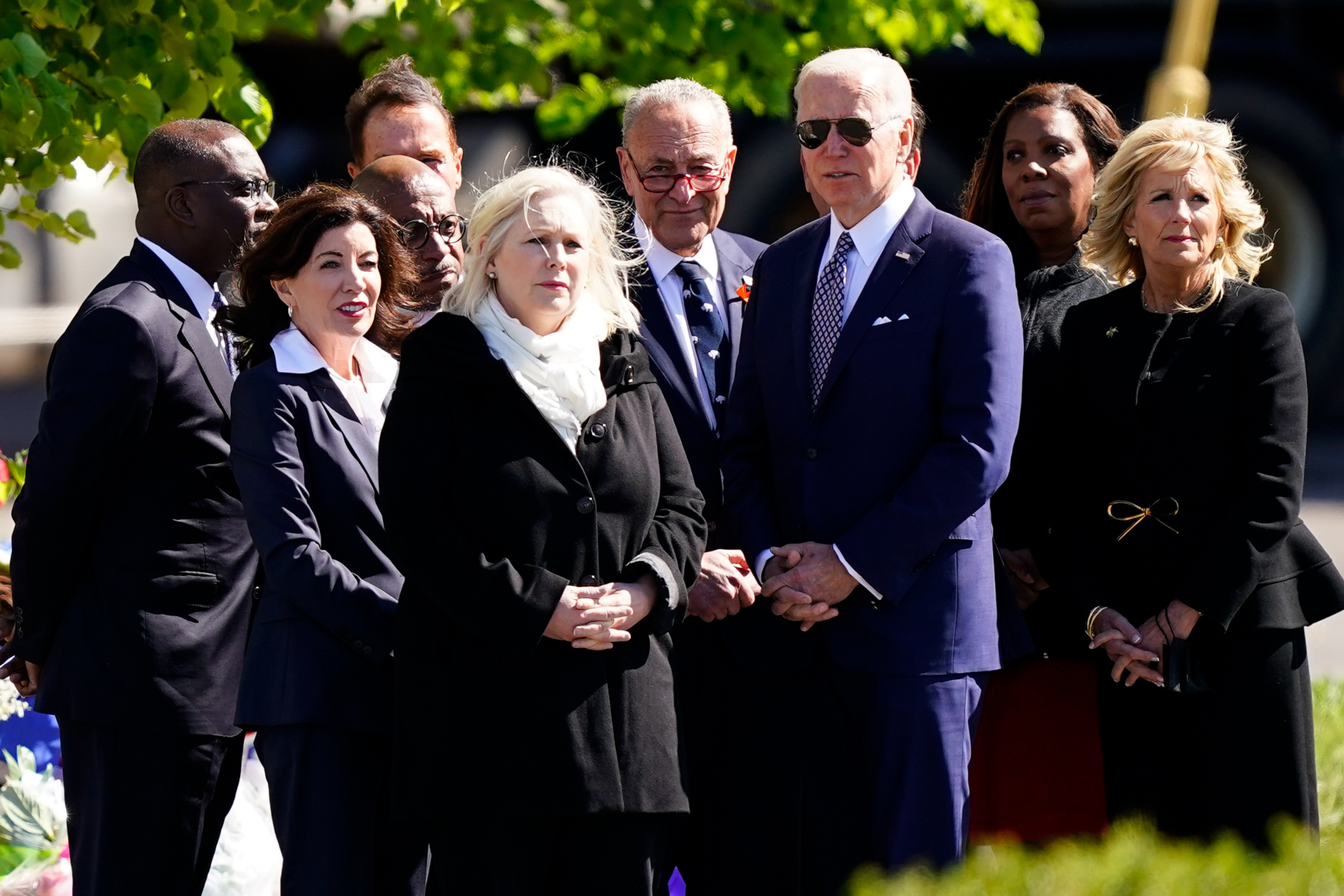 “We are not used to seeing presidents in this neighborhood,” says Rhonda, stationed behind the several-block police cordon with which the Buffalo police have encapsulated the horror that took over this New York State city last Saturday. So an 18-year-old white supremacist named Payton Gendron, armed to the teeth and intoxicated with racist hatred, extreme nationalism, and wild conspiracy theories, drove three hours to reach a popular supermarket on Jefferson Avenue, the social epicenter of one one of the most disadvantaged neighborhoods in the East of the city of 278,000 inhabitants, famous for being the gateway to Niagara Falls, on the border with Canada. Gendron chose it because of the percentage of its black population. Before police apprehended him, he shot 13 people, 11 of them African American. He killed 10. Three days later, President Joe Biden, accompanied by the first lady, Jill Biden, has come here to comfort the families of the deceased and to meet with the leaders of a community torn between mourning and rage. .

“The devil came to Buffalo on Saturday,” he has said. “What has happened can only be defined as domestic terrorism. White supremacy is poison. We cannot remain silent in the face of these massacres”, he added, referring to tragedies such as “Charlottesville, Atlanta or El Paso”. Biden has charged on several occasions against “those who spread those lies in search of power, political gain or simple benefit.” He was referring to the conspiracy known as the Great Replacement Theory, according to which the elites of the left are disempowering whites by allowing the uncontrolled entry of immigrants or by facilitating access to the vote for minorities. That belief has found an echo with some Republican lawmakers of late, as well as with Fox News host’s powerful speaker Tucker Carlson.

The president of the United States has arrived at around 10:00 at the place where the shooting began, the parking lot of the Tops Market, which has been closed since the weekend, like the rest of the shops in the area.

Dozens of residents of a neighborhood of dilapidated wooden houses, vacant lots and barbershops and beauty salons were waiting for him behind the yellow and black “Do Not Enter” tapes. Some carried handwritten “Black Lives Matter” or “Stop the Hate” signs. One of them, Derek Reese, explained to EL PAÍS that on Saturday he lost two friends: “the policeman and the taxi driver.” People in Buffalo, between desolation and stupor, already refer to the victims like this, by their professions. The retired cop was named Aaron Salter. The taxi driver, Heyward Patterson, who was also a deacon at the local church. “Those guys were really good people. It could have been any of us. It is going to be very difficult to recover from this blow, ”says Reese. “Just now that we were beginning to overcome some of our problems, this tragedy happens … This area is eaten away by drugs.”

After the scene of the crime, Biden went to a nearby gym, where the relatives of the victims were waiting for him, whose disconsolate cries could be heard on the other side of the curtains, from the area set up for the press. Biden has shown in his 15 months in office that he is comfortable in his role as “comforter-in-chief.” He has taken his time with them. Dee Davis, daughter-in-law of one of the murderers, Celestine Chaney has explained that “his empathy was noticeable.” She has not come just to take the photo.

Before Biden, who has reviewed the names of all the victims, Kathy Hochul has spoken, who in addition to being the governor of New York is “daughter of Buffalo”, and that is why she asked for the victory for a local neologism: buffalove (which results from adding Búfalo and amor, in English) before “that hatred that is no longer residual, but rather spreads in the corridors of Congress and in the prime-time cable television programs.

After Hochul, there was also time for, among other speakers, Chuck Schumer, representative from New York and leader of the Democratic majority in the Senate. “I advocated a lot for the construction of the Tops Market [lugar del tiroteo]. It was important to guarantee access to healthy food for the residents of a particularly hard-hit area. We could not imagine to what extent it was going to end up being a social meeting place”.

Nor could it have been imagined that Saturday would become the scene of one of the most tragic racist massacres of recent times in the United States. The author of it, a boy who was able to buy an AR-15 rifle without problems, which he manipulated so that he could load more ammunition than the factory allowed, will appear again this Thursday before the judge.

Two other high officials of the Government of Boris Johnson, accused of sexual harassment | International

By admin
Recent Posts
Latest News
Facebook Twitter WhatsApp Telegram
Back to top button
Close
Featured Posts
The votes that he already adds and what Petro would lack to win the Presidency | Presidential Elections Colombia
June 4, 2022

Ukraine: On the Kherson Front: “We need much more artillery fire for an offensive against the Russians” | International
August 1, 2022

Ukraine: On the Kherson Front: “We need much more artillery fire for an offensive against the Russians” | International

Keys | The European veto on Russian oil: an important step, but not definitive | International
May 5, 2022

Keys | The European veto on Russian oil: an important step, but not definitive | International

Boric and time to adjust all his dreams
September 6, 2022

Boric and time to adjust all his dreams

The death in prison of a Corsican nationalist leader fuels the risk of unrest in Corsica | International
March 22, 2022

Rishi Sunak takes advantage of the calm in the markets to delay his long-awaited fiscal plan | International
October 26, 2022

Cristina Kirchner: The attack against Fernández leads to a review of the security of Lula and Bolsonaro in Brazil | International
September 3, 2022

Cristina Kirchner: The attack against Fernández leads to a review of the security of Lula and Bolsonaro in Brazil | International