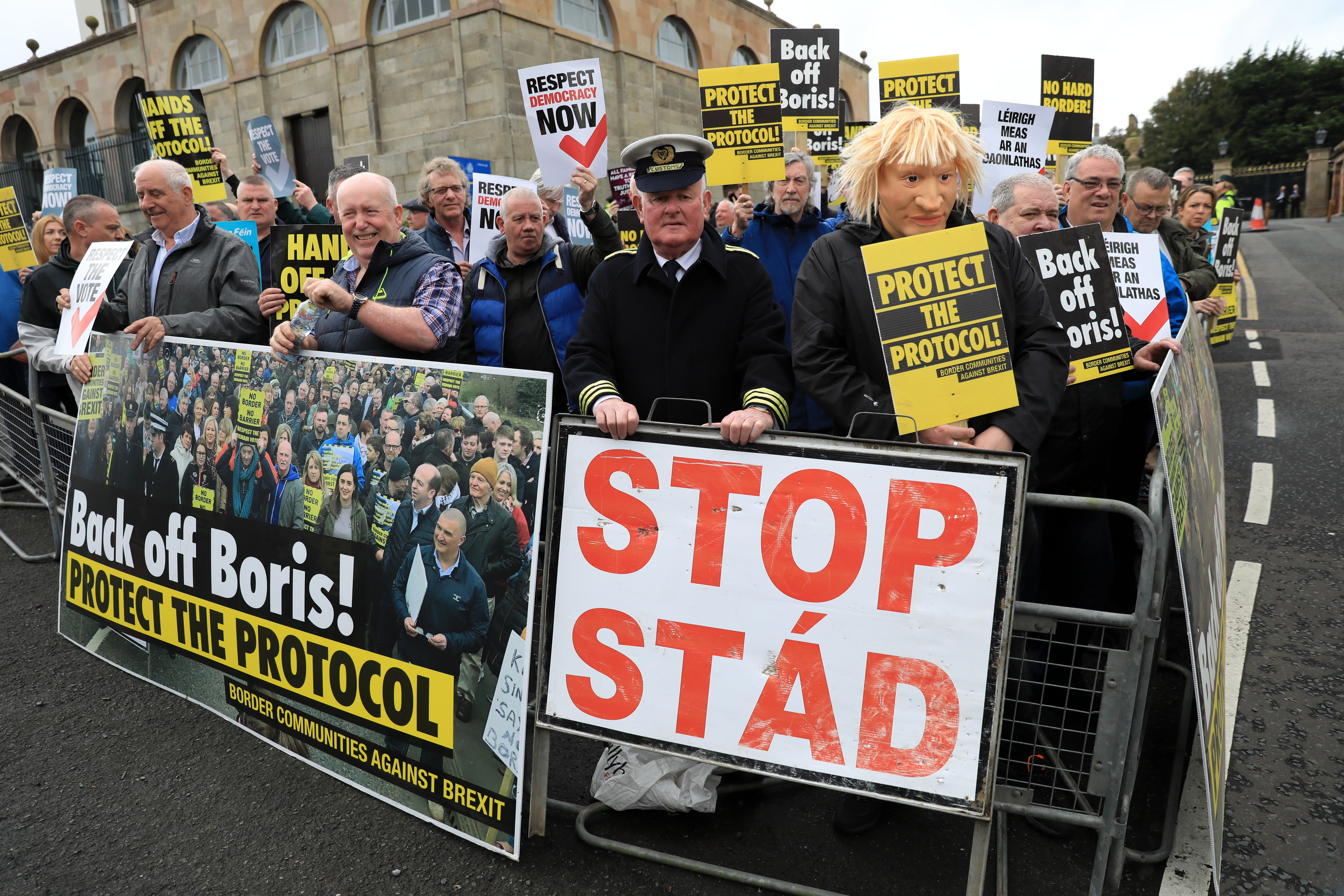 Boris Johnson once defined himself as a shopping cart: no matter how hard you push it in one direction, it swings both ways. It was a way of admitting his limited ability to focus to the end on a goal. For this reason, his strategy for Northern Ireland has been met with skepticism by allies – the Unionists – and by rivals – the European Union. The prime minister has traveled to Belfast on Monday to meet with Protestants and Catholics, and try to collaborate in resolving a crisis that once again threatens to block sine die the autonomous institutions of the region.

The Democratic Unionist Party, from which the Sinn Féin republicans have snatched the first position in the Stormont Assembly (Northern Ireland’s autonomous parliament) in historic elections, is determined to block the formation of a government until London does not get rid of the Protocol of Ireland, the document annexed to the EU Withdrawal Agreement that Johnson signed to carry out his desired Brexit. The Good Friday Agreement of 1998, which brought peace to this territory, imposes a distribution of power between Protestants and Catholics so that the autonomous institutions work. If the unionists do not collaborate, the result is paralysis.

Johnson has carried commitments and good words under his arm to satisfy all the political parties, with which he was going to meet, in addition to softening – not withdrawing – his threats towards the EU. Even so, there have been acts of protest throughout the territory, with signs that could read “Stay away, Johnson” or “Protect the Protocol”.

His visit was preceded by a lengthy article in the Belfast Telegraph, that Downing Street spokesmen attribute exclusively to the handwriting of the Prime Minister, written without the help of advisers. “We will always keep the door open for a sincere dialogue. And we will continue to protect the internal market [de la UE], as it has been protected since the existence of the Irish Protocol. In the same way that we will protect the open border with the Republic of Ireland, something that has always been of the utmost importance,” Johnson wrote.

That was the carrot. The stick came two paragraphs later. “I trust that the position of the EU will change. If not, action will be necessary. The Government has a responsibility to ensure consumers, citizens and businesses in Northern Ireland that they will be protected in the long term. In the coming days, we will provide Parliament with more details of what the next steps will be, when I return [a Londres] at the end of my discussions with the local parties”, warned Johnson.

This same Tuesday, the British Foreign Minister, Liz Truss, could present to the House of Commons the outlines of a law that would unilaterally repeal substantial parts of the Irish Protocol. The purpose of this treaty was, in its day, to avoid a new border on the island of Ireland. The peace agreement diluted, until it became invisible, the territorial demarcation that separated the Republic of Ireland (member of the EU) from the British territory. Any sign of a new division, even if its purpose was mere customs control, to protect the Internal Market of the European Union, could revive tensions and sectarian violence. Instead, it was decided that Northern Ireland would continue to be within the EU’s customs and trade space, and that customs and health controls would move — symbolically; in practice they had to be carried out at inland port facilities—to the Irish Sea.

In a region that has advanced remarkably economically and politically, there are still mutual misgivings between its two main communities. What benefits one, arouses the fears of the other. And the unionists began to suspect, rightly or wrongly, that the Protocol further distanced them from the United Kingdom and became the umpteenth stab in the back of London. Result: episodes of sectarian violence in the streets and, once again, paralysis in the institutions. “We cannot hide the fact that the delicate balance that could have been created in 1998 has been upset. A section of the Northern Ireland political community feels that their aspirations and identity have been threatened by the implementation of the protocol,” Johnson wrote.

DUP leader Jeffrey Donaldson has made it clear to the British Prime Minister that words were not enough for him and he needed action. They will not return to the autonomous institutions until the new legislation that the Government promises, to revoke parts of the protocol, is approved.

The EU on alert

The announcement that Minister Truss will make in Parliament will be very vague, British government sources anticipate. It will hardly be the beginning of a long legislative process —it could take up to a year— that will undergo many amendments along the way. For this reason, the general interpretation coincides in seeing the strategy more as a negotiating pressure weapon than as a fait accompli. In the midst of the current crisis, with the Ukraine war, rampant inflation and a faltering economy, the last thing Johnson wants is a trade war with the EU.

The Foreign Minister of the Republic of Ireland, Simon Coveney, has called for temperance. He is the EU member that would most directly suffer a new crisis between Brussels and London. “It is time for calm, dialogue and compromise between two partners like the United Kingdom and the EU, to solve all these important issues,” said Coveney on Monday. The minister wanted to emphasize the important nuance that the law with which London threatens to undermine the Protocol had not even started. “The alternative [al diálogo] is to carry out unilateral measures that generate tension, resentment, confrontations, legal actions, and that, of course, would call into question the application of the Trade and Cooperation Treaty, because this treaty and the Withdrawal Agreement are interconnected, and one depends on of the other”, explained Coveney. A relatively subtle way of making it clear to Johnson that a trade war was possible.

United Kingdom: Labor Starmer raises the flag of budgetary rigor against the “irresponsibility” of the Conservatives | International

Check Also
Close
The cap on Russian oil: one more blow to Moscow, but far from lethal | International
9 mins ago

Nancy Pelosi’s visit is a problem for Taiwan too | International

War in Ukraine: When Putin told me that he never trusted anyone | International
March 9, 2022

War in Ukraine: When Putin told me that he never trusted anyone | International

Petro and Maduro announce the opening of the border and the reestablishment of flights between Colombia and Venezuela
September 10, 2022

Video analysis | What scenarios are there for Brazil after the elections? | International
October 1, 2022

Video analysis | What scenarios are there for Brazil after the elections? | International

Victims of the tornado in Kentucky: “My house, my business, I saw my whole life disappear in an instant” | International
March 8, 2022

Victims of the tornado in Kentucky: “My house, my business, I saw my whole life disappear in an instant” | International

France: The end of the socialist party in Épinay | Opinion
May 8, 2022

France: The end of the socialist party in Épinay | Opinion

The civilized treatment between Lula and Bolsonaro and other keys to the electoral debate | International
October 17, 2022