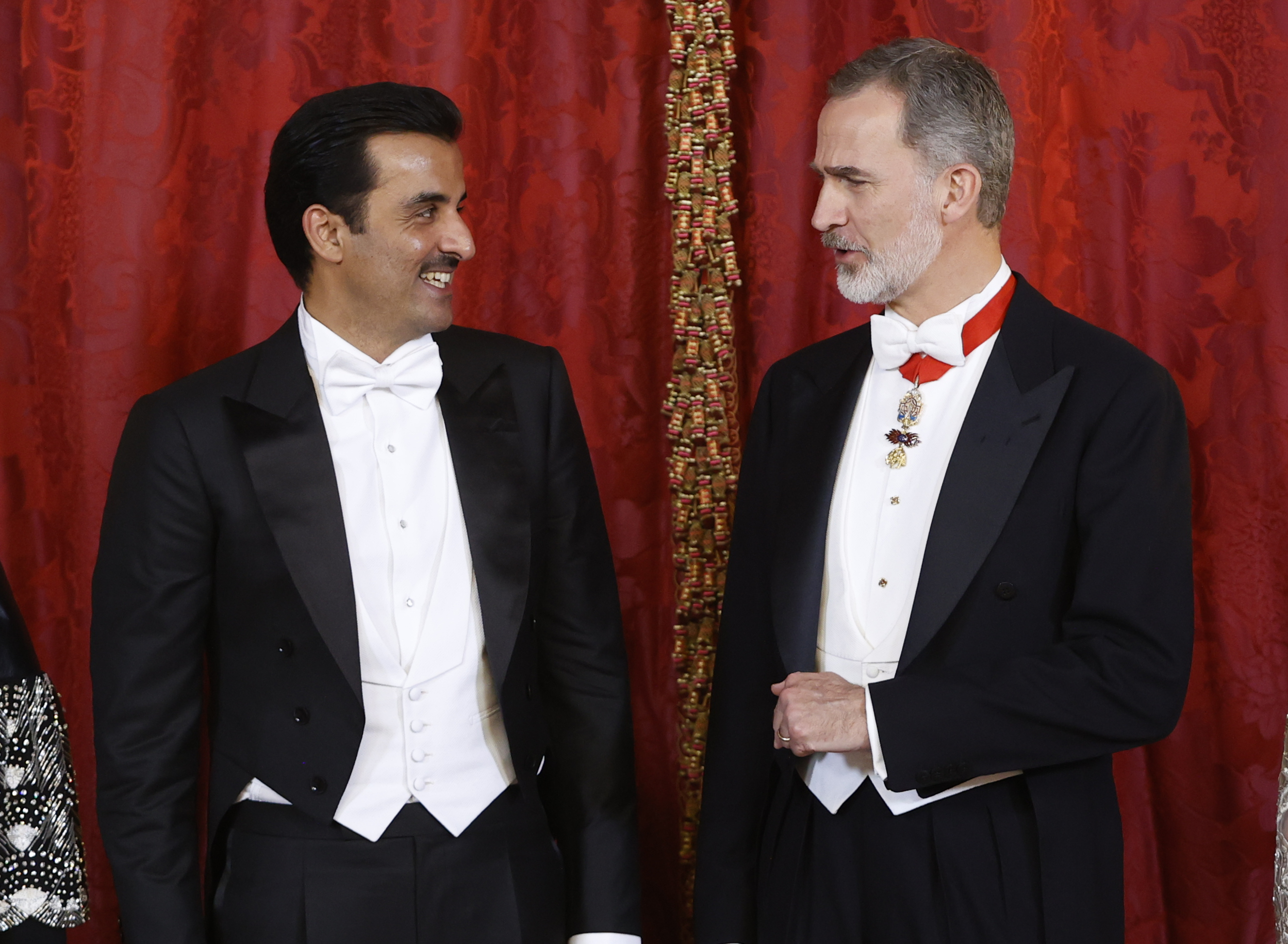 The emir of Qatar, Tamim bin Hamad Al Thani, has reaffirmed tonight in Madrid his country’s confidence “in the soundness of the Spanish economy” and has announced that Qatari investments in Spain will increase by 5,000 million dollars (4,720 million euros). The sheikh made this announcement during the gala dinner offered by Felipe VI at the Royal Palace, at the end of the first day of his first visit to Spain. Previously, his host had thanked him for the confidence of the emirate of the Persian Gulf in the Spanish economy and his “determined will to continue being one of the first investors [extranjeros] in Spain”.

The deputy foreign minister of the emirate, Lolwah Rashid Al Jater, already announced last week to a group of Spanish journalists in Doha, the country’s capital, that there would be a “big announcement” on the occasion of the emir’s visit, without further details, while the manager of the office for the promotion of Qatari investments abroad added that this would be related to “renewable energies and sustainability”.

The emir has arrived in Spain accompanied by the deputy prime minister and foreign minister of his country, in addition to the ministers of Finance, Energy Affairs and Trade and Industry, as well as the head of the Diwan (the Royal House) and the director of the QIA, the Qatari sovereign fund, with resources estimated at 425,000 million euros.

Qatar is already a major investor in Spain, with a stock accumulated of more than 6,000 million, and presence in important companies, such as Iberdrola, of which he is the main shareholder and with whose president, Ignacio Sánchez Galán, the emir plans to meet during his stay in Spain. It is also the second largest gas exporter in the world, after the United States, which makes it a key country for Europe at a time when it tries to cut its dependence on Russian gas. However, the Qatari authorities have already warned that their supply contracts, including those with Spain (where gas from the emirate accounted for 11.4% of the total in 2021), are long-term, so they do not strong increases can be expected, despite its plans to increase production capacity.

The President of the Government, Pedro Sánchez, attended the dinner at the Royal Palace, with whom the emir plans to sign an agreement on Wednesday that elevates bilateral relations between the two countries to the category of strategic association with Spain. It will be the most important of a dozen agreements that include numerous issues, including military cooperation.

“This year we celebrate the 50th anniversary of the establishment of diplomatic relations between our two countries, which have been characterized by continuous development and growing cooperation in all fields, particularly in education, health, investment, energy and economy,” he said. the emir said. “All this is proof of our confidence in the strength of the Spanish economy. Today I have given instructions to increase investments by 5,000 million dollars, which will have added value to our already existing successful investments in Spain, taking into account that Qatar is considered one of the largest Arab investors in Spain”, he assured.

Al Thani has not specified on which land these investments will be carried out, but the head of QIA is expected to sign an agreement this Wednesday with the state development financing company Cofides, in which investment opportunities will be identified under the umbrella of the funds. EU Next Generation. The emir has also congratulated Spain for qualifying for the World Cup in Qatar and has invited the King and Queen to its inauguration, on November 21 in Doha.

The gala dinner was the culmination of the first day of Al Thani’s state visit, the first he has made to Spain since he assumed power in June 2014. Among those invited to the dinner were the presidents of Iberdrola , Ferrovial, Acciona, Banco Santander, El Corte Inglés and Naturgy, among other companies.

In the morning, Felipe VI received Tamim bin Hamad Al Thani with a hug and two kisses on the cheek, in the courtyard of the armory of the Royal Palace of Madrid. Then, following the customs of his guest, he shook hands with Sheikha Jawaher bint Hamad bin Suhaim Al Thani, as did Queen Letizia. The warm welcome to the emir, on his first state visit to Spain, had its prelude on Monday afternoon when, in an unusual gesture of friendship, Felipe VI approached the Palacio del Pardo, the residence of foreign leaders visiting Spain , to greet him and chat informally.

After the official reception at the Royal Palace, the Qatari head of state visited the Senate, where, in a brief address to deputies and senators, he assured that the two countries “have a lot in common” and that the objective of his visit is ” Strengthen relationships in all areas. The presidents of the two Chambers, Meritxell Batet and Ander Gil, awarded him the medals of honor of both institutions. Next, the emir met with Felipe VI in La Zarzuela, where the two royal couples had lunch. In the afternoon, he attended an equine exhibition at the Hípica de La Zarzuela and received the gold medal from the Madrid City Council, whose mayor, José Luis Martínez-Almeida, assured that Spain and Qatar are “the definitive arguments against which they believe that monarchies are things of the past”. The visit of the emir of Qatar to Spain is part of a European tour that will also take him to France, the United Kingdom or Davos (Switzerland).

Last minute surprise in gold prices! 12 November 2022 how much is gram gold, quarter gold prices today, how much is it? The current gold buying and selling figures in the Grand Bazaar

Do not occupy the guideways

Lidl closes two supermarkets in Gijón in a timely manner due to the transport strike, which is entering its sixth day | Economy

‘Ilhan’s life is in danger!

China’s double response to the protests: accelerating vaccination of the elderly and leading the demonstrations | International

German Christian Democrats win elections in North Rhine-Westphalia, according to polls | International
May 15, 2022

Guide to the G20 in Bali: the first summit of the confrontational era | International
3 weeks ago

Guide to the G20 in Bali: the first summit of the confrontational era | International

The unsung heroes of the Chernobyl resistance against the Russians | International
June 3, 2022

The last mission of Raúl Castro: that Cuban socialism survive its founders | International
May 8, 2022

The last mission of Raúl Castro: that Cuban socialism survive its founders | International

Elizabeth II: The world bids farewell to a “queen of hearts” | International
September 8, 2022

Elizabeth II: The world bids farewell to a “queen of hearts” | International

The United States will send more military aid to Ukraine in the face of the Russian offensive in Donbas | International
April 19, 2022

Kirchnerism leaves Alberto Fernández alone in the war against inflation in Argentina
May 24, 2022

Testimonies, forensic analysis, satellite images: this is how evidence of war crimes is sought in Ukraine | International
April 14, 2022

Testimonies, forensic analysis, satellite images: this is how evidence of war crimes is sought in Ukraine | International