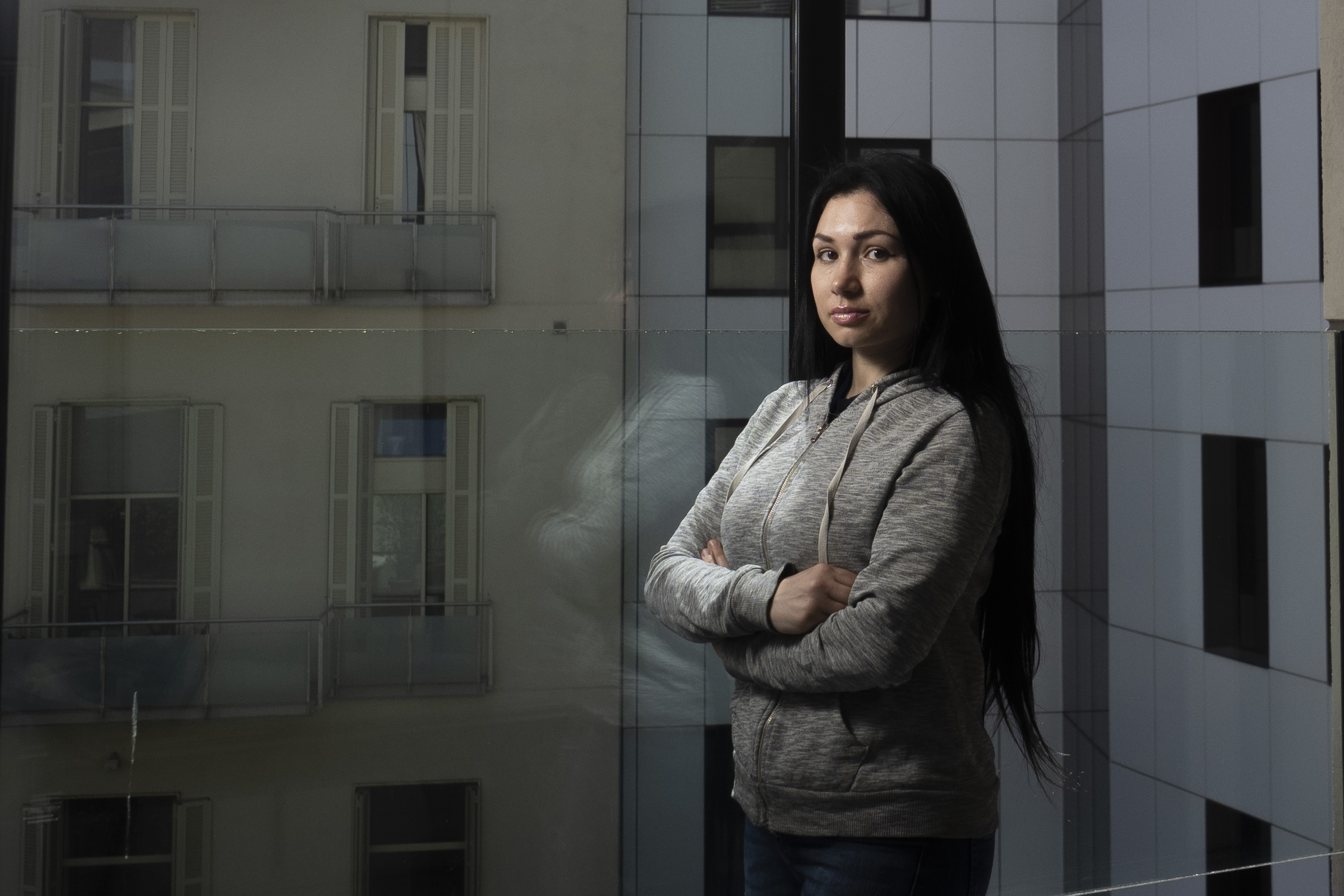 — When did you start working with Clintu?

María (not her real name) still has a working relationship with Clintu, the platform to contact cleaning workers founded in 2015, and prefers to remain anonymous. She is Latin American, like the majority of women who find work this way: she is about forty years old, an age that is also common among these employees. She soon recognizes that the platform, which has gotten her out of trouble in the past, is now doing her harm. “Clintu tells her clients that Social Security pays us, that’s why they prefer to contact me through the platform, they feel calmer in case something happens to us, but I tell them no, I’m not hired. I charge in black and I don’t pay”, she criticizes, while her voice is lost on the other end of the phone.

It’s not the only one. “We are talking about a completely feminized group, historically little valued, where the workers are mostly migrants and do not have a social and economic network, which makes them very vulnerable,” says Irene Galí, responsible for a recent report by Comisions Obreras (CC OO) that has collected testimonies from those affected. The study, titled Precarious the precarious. Home care and cleaning workers on digital platforms. The cases of Clintu, MyPoppins and Cuideo, advocates that the employment relationship between cleaning workers and the first two platforms referred to in the document be recognized.

These platforms allow you to hire cleaners by the hour with a very similar operation to that of food delivery or transport websites. The price is set by the company, as well as the hours and type of service, but it avoids establishing an employment relationship with the cleaners. The commission that the platform receives on the total payment of the client can reach 50%.

-How much do you usually charge?

— Between seven and eight euros an hour. It depends on whether it is superficial or deep cleaning. Before, I earned more: a month I could make between 800 and 900 euros. Clintu also keeps a commission.

María answers now by WhatsApp. She doesn’t have time for any more calls. In the messages she also states that the platform gave her an extra two euros if the client did not have the necessary products, even if they cost more; or that the displacement was not paid. This newspaper has contacted the platform, but has not received a response.

In the first pages of the CC OO study, an important distinction is made: “The legal framework for cleaning and home care workers does not depend on the type of work they perform, but on who hires them.” If a person is hired by a family to perform tasks at home, then they will become part of the Special System for Domestic Workers (SETH), which is not fully integrated into the General Social Security Regime (RGSS), a historical claim among the unions.

This exceptionality, which according to the study allows the platforms to present themselves as “intermediaries” between the worker and the person receiving the service, also implies deficiencies in terms of dismissal, health, risk prevention or protocols against harassment, among others.

However, unions and those affected defend that, in the case of cleaning platforms, they should hire the workers, with which they would become part of the General Social Security Regime, with the social protection that this entails. “Not doing so constitutes fraud,” says Galí.

The study argues that there are numerous indications to justify the employment relationship. For example, companies channel payments and determine the frequency with which workers receive their remuneration; or that the prices are set by these platforms, which also serve as a mandatory communication vehicle with customers (not doing so can lead to a penalty of up to 150 euros).

“The evidence of an employment relationship is as clear as that found in the case of the sentence of the riders, the food deliverers”, maintains Epifanio Alocén, labor lawyer at Pardo Abogados. The 2020 Supreme Court ruling in favor of the riders, according to Alocén, could be applied in this case; as well as, he adds, the EU rulings that defend subcontracted workers.

For now, the Court of Justice of the European Union (CJEU) ruled earlier this year that the special legal framework that governs cleaning workers in Spain is discriminatory on the basis of sex, as it is a group made up mostly of by women. The consequences are more pressing in the labor limbo of platform workers.

“They feel alone. They are often afraid to speak. Employers used to be known by word of mouth. Now they don’t know where they are going,” says Galí. The lack of protocols in these cases can lead to defenselessness in extreme situations such as sexual harassment by clients. The CC OO report makes reference to this, and this has been denounced by a victim, a former Clintu worker, a few weeks ago in Radio Barcelona.

More than 500 workers throughout Spain are awaiting a macro trial, postponed until January 2023, to determine the employment relationship between them and the Clintu platform. It is an ex officio demand from the Social Security Treasury after a labor inspection that has detected an employment relationship between the parties, and that has not been recognized by the platform, as described by Montse Arcos, CC OO lawyer and representative of some affected. Union sources recall that Clintu is not the first cleaning platform subjected to an unfavorable inspection: MyPoppins had to retroactively discharge female workers after a labor inspection, according to a resolution to which EL PAÍS has had access. According to Arcos, both cases are “the same”, because the existence of an employment relationship whose indications are “clear” was claimed.

— MyPoppins is like a shell company: They don’t have physical offices. And when I wanted to contact them to complain, a bot appears, you can’t talk to a person. They take half of your land and don’t get involved in the service.

It is the voice of Lucia C., a 31-year-old Spaniard who started working with MyPoppins in 2019 and who explains experiences similar to Maria’s. In her case, moreover, she had another problem. The company discharged her due to her inspection, although she was not notified and later found out about it. Lucia points out that the registration document records that she has worked for the platform “much longer” than she actually did. This, she claims, has harmed her.

“They seized what little I had, which was about 400 euros,” says this mother, referring to the help she received from social services at the time. MyPoppins has also not responded to inquiries from this newspaper. For her part, Lucia, who has now returned to her old job as a salesperson, frequently returns to an idea: “These platforms play with people’s needs”.

According to the latest data from the Active Population Survey, there are some 542,600 domestic workers in Spain, of which almost 90% are women (487,100). In April, Social Security registered some 378,349 employees. “How do we get them out of precariousness?” asks Irene Galí, who recognizes that there is no coercion to work with these companies. And then she reflects: “In a context of work and life restriction, we should really ask ourselves to what extent these women can make a voluntary decision.”

I take care, a “special” case

The CC OO report also includes the case of Cuideo, a care platform for the elderly or dependents that operates as “a digital placement agency”. Her case, according to the study, is “different” because there is a recognized employment relationship: the workers are hired under the Special System for Domestic Workers. “We cannot speak categorically of fraud since, despite being a deficient and unfair system with the workers, it is apparently legal,” the document states. Irene Galí, the author of the study, points out that “the findings are not as conclusive as in the other platforms”, although she advocates that the employment relationship be with the platform and not with the families.

Carmen, who has preferred to identify herself by this name to maintain her anonymity, has been working with Cuideo since 2015. The caregiver, a Central American woman in her fifties who has been working in the sector in Spain since 2010, says that before joining the platform she was in charge of an elderly person for 24,000 euros a year, in addition to vacations and extra pay. “Since the platforms have become a monopoly, I can no longer continue to work by word of mouth, people have more confidence in these companies, and I can no longer negotiate the hours or prices of my work,” he laments. Carmen.

The worker criticizes the lack of follow-up by Cuideo once she has been assigned to a family. In this sense, he recalls the “threats” he received for months in a service, from which he was able to get rid, he stresses, “thanks” to the fact that he was infected with coronavirus: “The client wanted me to be with her until three in the morning, He yelled at me, telling me that if I didn’t do it, he was going to report me to the platform.” As Carmen recalls, the possibility of accessing new jobs depends largely on positive comments.

Consulted by this newspaper, Cuideo defends that a coordinator with training in psychology is in charge of giving “continuous monitoring” to families and caregivers, who represent 80% of the care workers of this company. In the event that both parties do not fit together, they add, “we offer mediation and solutions”, which may consist of the replacement of the caregiver.

The care platform, which has 100,000 validated professionals and its own staff of 50 caregivers, maintains that “it is the family who pays a monthly fee to Cuideo for taking care of all the hiring procedures” for the workers. The company’s annual turnover, they say, is 35 million euros.

Armament in Cyprus will not benefit anyone

12.5 kilograms of cannabis caught in the stopped truck in Ankara

Israel and Lebanon reach an important agreement on the maritime border for the exploitation of gas | International
October 11, 2022

Trump enters the clash against “DeSantis, the prude” for “playing” to run for the White House | International
3 weeks ago

Trump enters the clash against “DeSantis, the prude” for “playing” to run for the White House | International

Charles III and Queen Camilla will be crowned on May 6 at Westminster Abbey | International
October 11, 2022