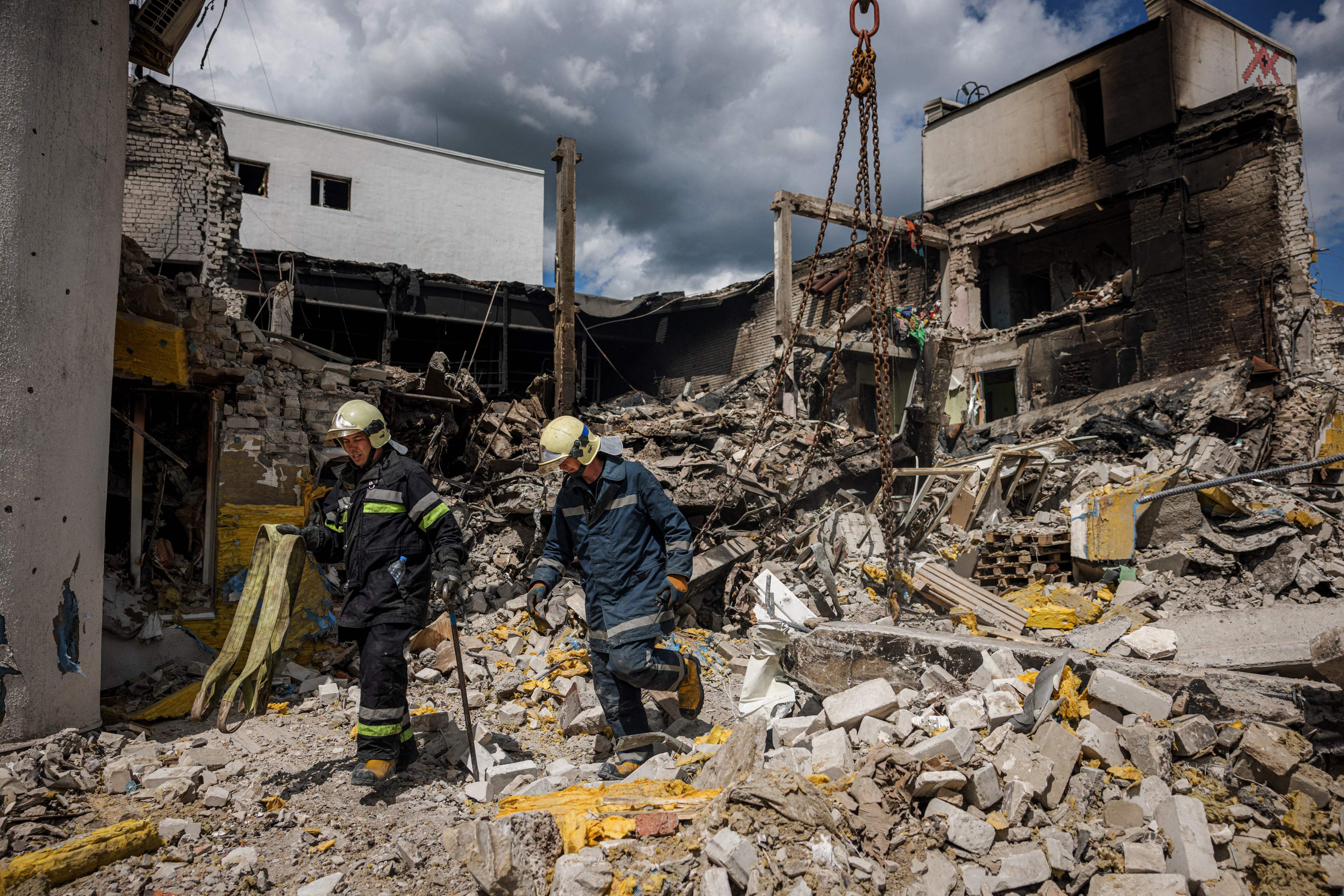 The European Commission announced this Wednesday that it will increase macro-financial assistance for the functioning of the Ukrainian State by 9,000 million euros. But the Executive chaired by Ursula von der Leyen is no longer satisfied with emergency aid and has proposed reserving part of the community budget for the reconstruction of a country devastated by the Russian invasion. The community organization also defends that the EU should lead international aid and assume a large part of a bill that already amounts to hundreds of billions of euros.

The objective of the Commission is that the reconstruction be oriented from the beginning towards the integration of the country with the European Union. And Brussels prefers to start the effort as soon as possible, without waiting for the end of the war, because “the day may never come when the Russian invaders allow Ukraine to have a clean peace,” said the Commission’s economic vice president, Valdis Dombrovskis.

The President of the European Council, Charles Michel, has also announced that the review of the enlargement process will be addressed at the European summit in June, with the intention of allowing partial and reversible accessions. The summit will also discuss the idea of ​​the French president, Emmanuel Macron, to create a confederation that brings together both the Union’s partners and all the surrounding countries that share the same values ​​and principles.

Michel supports Macron’s idea because, in his opinion, “there is a geopolitical community that extends from Reykjavik to Baku or Yerevan, from Oslo to Ankara…”. And the President of the Council proposes to provide that territory with a political structure that he calls the European geopolitical community. In that space is Ukraine, a country that has asked to join the Union, although all sources agree that it will take years to achieve it.

The plan on Ukraine approved this Wednesday by the Commission calls for underpinning the reconstruction on four pillars that put the country on the path of the Union: the reconstruction of civil infrastructure and the adaptation of electrical and digital networks to European standards; the modernization of the Administration and its alignment with a rule of law; the application of a regulatory agenda that deepens Ukraine’s integration with the EU; and support for the economic and social recovery of the country.

To finance such an enormous effort, the Commission proposes to create an international support platform, led by the Ukrainian Government and the community body. And channel EU aid through an instrument called RebuildUkraine (rebuild Ukraine), integrated into the EU budget and intended to finance grants and loans.

The operation of this item would be similar to that of the Recovery Fund created as a result of the pandemic to help EU partners, so that the aid would be granted in exchange for reforms and investments. “Our idea is to help Ukraine create the foundations of a free, democratic and prosperous country,” Dombrovskis pointed out during the presentation of the document at a press conference.

Brussels has not yet put an exact figure on the cost of rebuilding the first European country that has been invaded by a neighbor since World War II. But he calculates that “the estimated joint damage already reaches hundreds of billions of euros, with more than 100,000 million in damage to infrastructure alone.” The Commission believes that given the extent of the damage caused by the war so far, “the reconstruction effort would potentially cover more than a decade.”

Von der Leyen’s Executive wants to assume the leadership of the essential international aid to guarantee that Ukraine emerges from the war with a recovery and reform agenda clearly oriented towards its integration with the European Union. “Since this war is being fought on the borders of Europe, the EU is ready to lead the international effort alongside Ukraine itself and provide a significant part of the financing,” Dombrovskis said.

The Commission assures that the aid granted for years to Ukraine, in particular since the Russian invasion of Crimea in 2014, had already resulted in the modernization of the country. In seven years, kyiv received almost 8,000 million euros from the community budget between macro-financial assistance loans (which was the bulk), subsidies or humanitarian aid.

The injection of resources accelerated as of February 24, with the Russian invasion. And since then, the Government of Volodímir Zelenski has received 4,100 million euros from the EU, to which Brussels wants to add 9,000 million throughout this year. Military support from public coffers has been 1,500 million, with another 500 million about to be approved.

But Brussels warns that aid from now on, and after the war, will acquire another dimension, to the point that it will be necessary, in all probability, to seek financing formulas beyond the community budget. The Commission suggests additional contributions from the Member States and from third countries that want to collaborate or, even, joint debt issues such as those of the recovery fund or guaranteed by the States.

By admin
Recent Posts
Latest News
Facebook Twitter WhatsApp Telegram
Back to top button
Close
Featured Posts
Guterres warns of “a winter of discontent” due to the war in Ukraine, inflation and inequalities | International
September 20, 2022

Guterres warns of “a winter of discontent” due to the war in Ukraine, inflation and inequalities | International

Where do I have to vote? Keys to the elections in Colombia 2022 | International

Izkia Siches: The new Chilean Minister of the Interior is greeted with shots in the air in the red zone of the Mapuche conflict | International
March 15, 2022

Izkia Siches: The new Chilean Minister of the Interior is greeted with shots in the air in the red zone of the Mapuche conflict | International

The constitutional referendum divides even the Discalced Carmelite nuns in Chile and unleashes a religious debate
August 27, 2022

Brazilian goalkeeper was expelled from Paraguay, due to VAR, before the game began | Sports
March 8, 2022

Brazilian goalkeeper was expelled from Paraguay, due to VAR, before the game began | Sports

China warns that it does not want to be affected by sanctions against Russia | International
March 15, 2022

The UN fights to unblock the trade of Russian fertilizers, essential to alleviate the food crisis | International
24 hours ago

The UN fights to unblock the trade of Russian fertilizers, essential to alleviate the food crisis | International

Elections 2022: The left bursts into force in the Colombian Congress | International
March 14, 2022

Elections 2022: The left bursts into force in the Colombian Congress | International