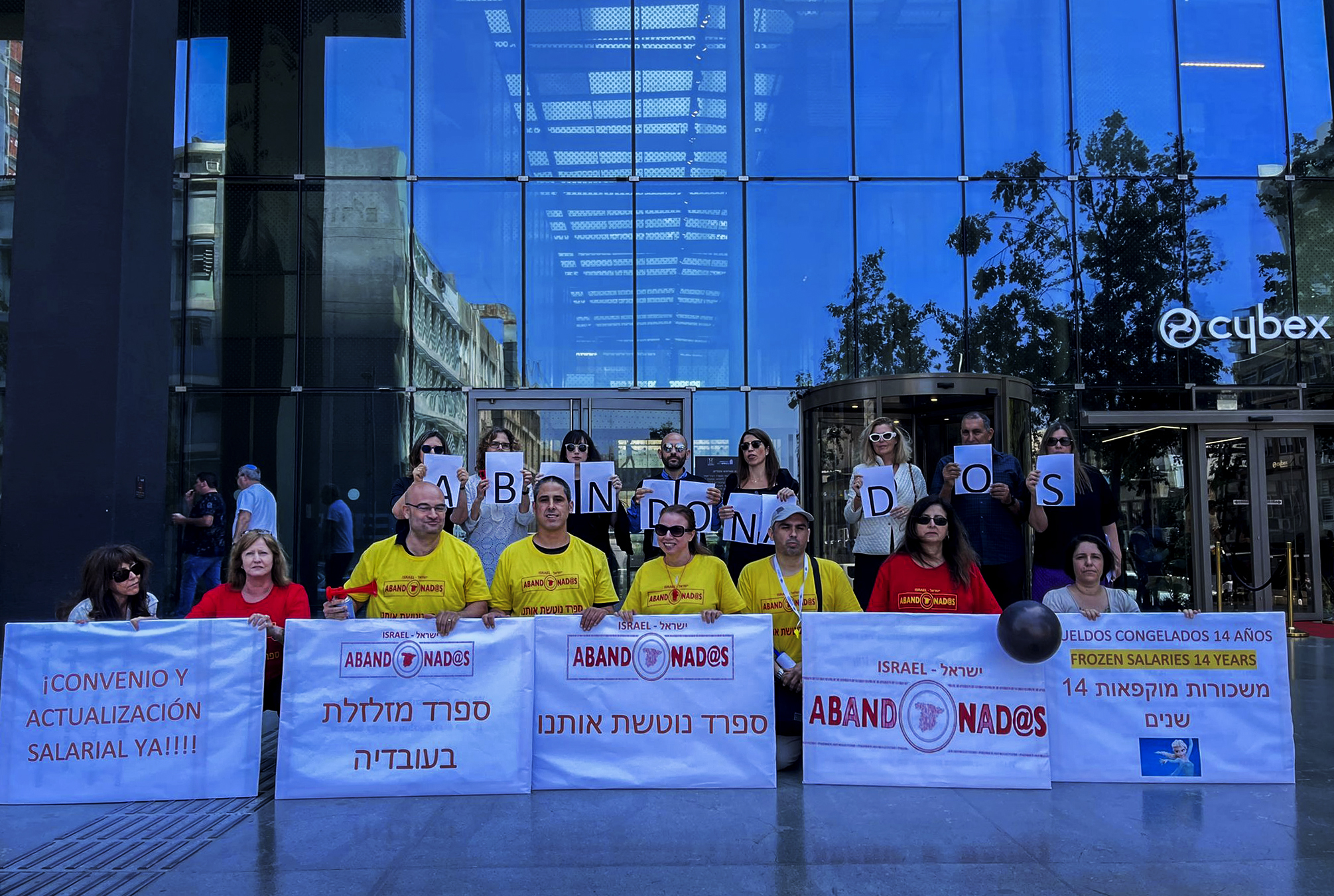 The Government of Pedro Sánchez faces an unusual labor conflict in the diplomatic sector, usually identified with salaries and bonuses that generously reward destinations outside of Spain. But the embassies also have local labor personnel who have put themselves on a war footing to denounce that in certain cases they live in labor destitution because neither the rights of Spanish legislation nor those of the country where they have been hired are recognized. . The protests of this staff, made up of some 5,000 people, are gaining strength both in Brussels, where the largest Spanish embassy is located, and in other capitals, from London to Tel Aviv.

The germ of the problem dates back to 2009, “when, in the midst of the economic crisis, the salaries of public workers were frozen,” recalls Osmany Llanes-Melo, head of CC OO in the Foreign Service. Until then, the salary of foreign labor personnel was subject to an annual salary review that took into account the fluctuations of the CPI in each country. “This declined in 2009. But it is that in 2016, when public wages began to rise in Spain, the workforce was ignored.” To add fuel to the fire, this freeze affects the workforce, but not the 2,500 officials abroad, whose salaries have grown in recent years.

The conflict began to become visible in the United Kingdom. “We went on strike on March 14”, explains a spokesman for the workforce in the United Kingdom, employed in the chancery of the embassy in London. “We did it because we can’t do it anymore. The freezing of our salaries has devalued them by almost 30% in the last 10 years. Conditions are so poor that we cannot find staff: we have gone from 120 to about 100 workers. In addition, the Brexit crisis multiplied our workload”. He charges 12 pounds an hour (the minimum wage is 9.5, about 11 euros to change), “a salary well below what is necessary to survive in London,” he criticizes. They feel “abandoned”, a word repeated by workers at Spanish institutions in many other countries.

Asked about the labor conflict in the United Kingdom, the Foreign Minister, José Manuel Albares, promised on May 9 a solution “in weeks”. “I take it very seriously,” he said, while acknowledging that the working conditions of these workers “are not good.” This commitment by the minister put an end to the British workers’ strike. Foreign and union sources indicate that the salary increase in the United Kingdom will be between 8% and 10%, “insufficient” according to the union representatives.

The same sources point out, as advanced The Newspaper of Spaina, that the salaries of the workforce of seven other countries will also be reviewed “soon”: Australia, Canada, Denmark, the United States, Finland, Norway and Sweden. The situation in these countries will be addressed after that of the United Kingdom, “the most urgent case”, according to Foreign sources. The same sources point out that “in the next few days” the issue will be discussed at a meeting of the Executive Committee of the Interministerial Remuneration Commission (CECIR). “What I ask of all the labor contractors that Spain has in the world is tranquility, patience, because it is up to us at this time to recover a situation that has been deteriorating for 13 years. A solution will be found, but it cannot be solved in one day”, added Albares at the same press conference.

In the largest delegation, waiting

Among the delegations whose salaries will improve, in principle, there is not that of Brussels, the flagship of Spanish diplomacy because it is the largest in the world. There the spark of the protests jumped on May 10, with a first mobilization in the Permanent Representation of Spain before the EU. Complaints in the community capital have also spread this Tuesday to the bilateral embassy in Belgium and to the consular services in that country. The Representation alone is a behemoth with some 300 employees, almost a third of whom are locally hired staff.

Elisa Marín, a member of the UGT and president of the PLEX Works Committee, a body that represents foreign labor personnel, points out that the demands are almost identical in all countries. “It is about reviewing salaries in the face of the evident loss of purchasing power and the increase in the cost of living; that local labor legislation is applied as it is indicated in the contracts, especially the indexation of salaries [en Bélgica, Luxemburgo, Chipre y Malta]; and the reimbursement of transport costs, which are already paid by the Ministry of Foreign Affairs [pero no otros ministerios]”, lists the president of the Works Council.

In the Representation before the EU, in charge of the negotiations that take place every day in the community institutions, 90 local employees have suffered a salary freeze since 2009, despite the fact that Belgian legislation provides for an automatic update of salaries according to the annual level of inflation, according to the representatives of the workers. The workers complain: “We cannot resort to the Spanish labor inspection because we are subject to Belgian legislation,” according to a statement from their representatives. “And we cannot resort to the Belgian labor inspection because embassies enjoy diplomatic immunity and there is no inspection by third States,” they add. Sebastián Trenado, head of UGT Public Services Abroad, assures that this same limbo occurs in many other countries.

No man’s land from the point of view of labor rights has resulted, in the Belgian case, in a loss of purchasing power of 30%, according to the workers. In 13 years, they have only had, according to the same source, an upward salary revision of 3.22% in 2019. During that time, Belgian legislation has imposed five salary increases, with a cumulative increase of 10.4% to adjust the purchasing power of workers to rising prices. The most recent call for a staff position at the Representation in Brussels, with an official category and open to people with a bachelor’s degree, provides for a full salary of 3,115 euros per month. Another, for a driver’s contract for 12 months, sets 2,380 euros per month. Belgian statistics show that the median salary in the country is 3,486 euros gross per month, and only 10% of workers receive less than 2,295 euros per month.

The current situation of labor personnel abroad has led to the reduction of consular services staff due to the departure of workers who “have come to request social subsidies in the different countries where they reside to make ends meet,” according to Marín. In the Netherlands, for example, “the Spanish colony has some 50,000 residents, who must be cared for by a staff of 46 people, counting the workers of the Cervantes Institute.” In Belgium, “there are 21 people for 75,000 Spaniards”. Without forgetting that not all the delegations have adequate services for the access of people with mobility problems. Solving it is another claim.

Trenado believes that until 2009 working in an embassy was “something economically interesting”, but “that disappeared 10 years ago”. “The stalls have ceased to be attractive, the places that are convened are deserted… It is very alarming. The clueless one that appears does not last more than six months. He realizes that for a job that requires him to be educated and speak several languages, he earns the minimum wage or even less”, he adds. He points to the embassies of more developed countries, “where life has become much more expensive,” as those that offer a worse outlook for labor personnel.

An important factor in all this conflict is the judicial derivative. In 2018, CC OO filed a collective dispute claim for the “violation” of the negotiation that updated salaries every year taking into account the CPI of each country, until 2009. In 2020, the Social Court number 8 of Madrid agreed. to the union, but there was an appeal against the ruling. CC OO hopes that the appeal will be resolved before the end of the month.

The movement of labor personnel is reproduced in many countries. In the Netherlands, the staff protest began on May 3 and is repeated every week. The same is happening in the United Kingdom, Germany, Uruguay and Australia, and it is already being prepared in France and Italy. “There is a budding mobilization in many countries. It is unstoppable”, says the person in charge of CC OO in the Foreign Service.

At the beginning of May, the protests also began in Tel Aviv (Israel), where this Wednesday they demonstrated together with some 15 colleagues Cristina Cardiel, a 50-year-old administrative worker at the embassy in the city, and Patricia Macías, a 51-year-old employee of the section politics and media. “We, the workforce, are the ones who know the countries, the ones who can help the Spanish colony the most. We are the engine of the foreign service, but we are not treated as such. Public officials are updated salary and we nothing. We don’t earn enough to live here,” laments Cardiel. Macías repeats the words of her partner in London: “We are abandoned.” They protest mid-morning, during the sandwich break, in front of the embassy.

They live in the most expensive city in the world, according to the classification of The Economist. “After taxes I charge about 2,400 dollars (2,283 euros). A normal and current nursery costs 1,200 dollars a month (1,141 euros). And in other departments they are even worse: at the Cervantes Institute they are around 1,800 dollars (1,712 euros), in a city where any coffee costs about five euros, ”adds Cardiel. “We have reported the shortage we are suffering to Foreign Affairs. We have provided economic reports, but it does not seem that we are going to be included in the first salary increase,” says Macías. They believe that UK workers have managed to get to the top of the list because they went on strike. “All measures are on the table. There is already a part of the staff that wants to take charge and be more aggressive”, adds Cardiel.

Carolina Alguacil, the first mileurista, is now a 44-year-old mother with a permanent job | Economy

29 October Republic Day was celebrated with enthusiasm on Vatan Street.

Putin’s war pushes the EU into even greater reliance on NATO | International
June 30, 2022

Russia admits that it will not resume supplies to Europe through the Nord Stream gas pipeline | International
September 5, 2022

Shinzo Abe’s killer alleges he was moved by former prime minister’s support for a church that bankrupted his mother | International
July 15, 2022

The EU will assume legal custody of evidence on war crimes in Ukraine | International
April 26, 2022

Elections Brazil 2022: Bolsonaro stays with the State of São Paulo and the right controls the territorial power | International
October 31, 2022

Elections Brazil 2022: Bolsonaro stays with the State of São Paulo and the right controls the territorial power | International

Portugal closes the political crisis that opened seven months ago with the approval of the 2022 Budgets | International
May 27, 2022

United Kingdom: Tax punishment for the middle classes turns against the Sunak government | International
2 weeks ago