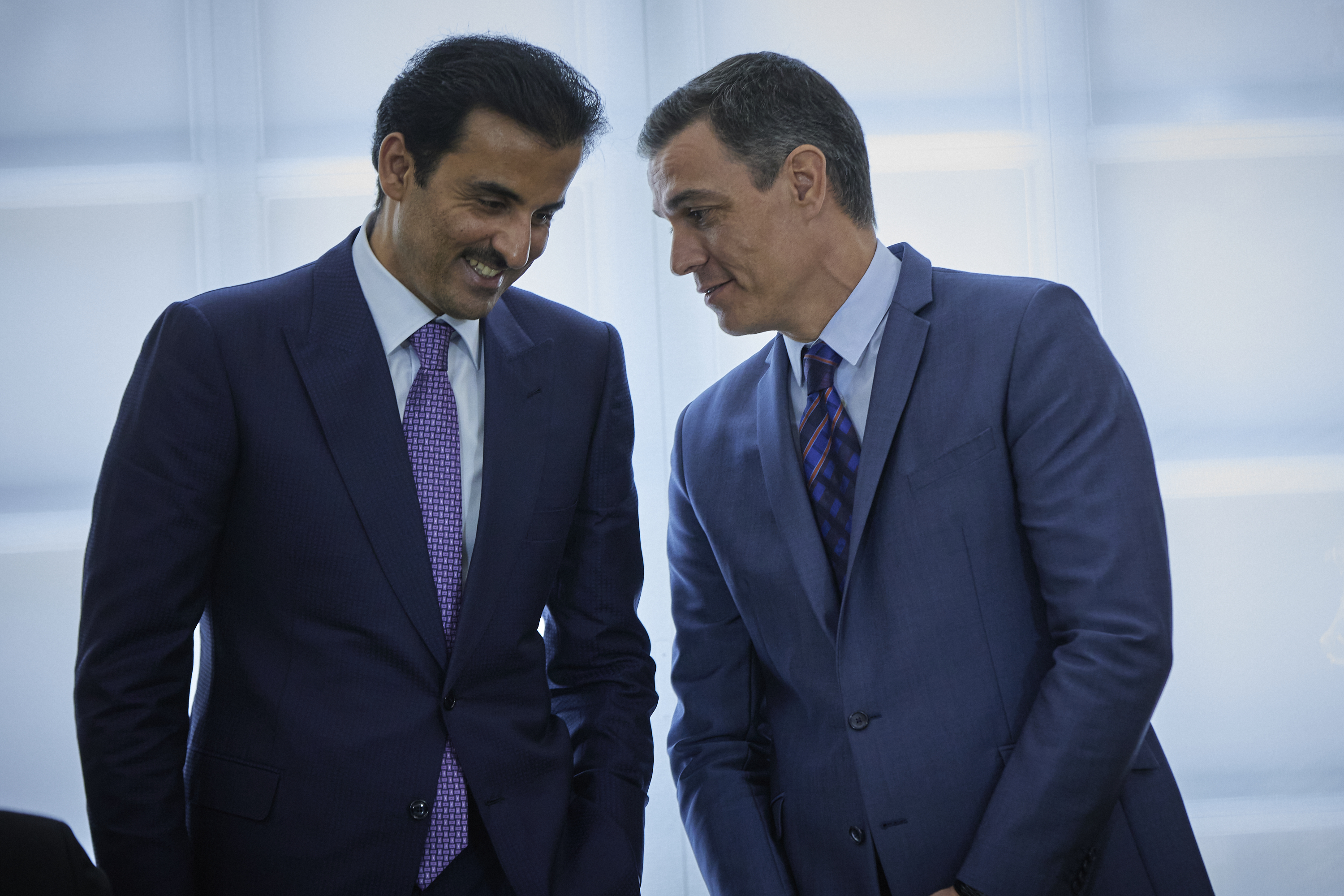 In times of energy shortages and rising interest rates, few things are more motivating than a promise of guaranteed long-term supply and an investment boost. Aware of this, and with a full checkbook thanks to the rise in prices, a large Qatari delegation – commanded by Emir Tamim bin Hamad Al Thani – has taken over a good part of the five-star hotel rooms in Madrid this week on a state visit in the one that has presented its credentials for the future: more than 4,700 million in renewables and digitization, and a tempting offer to depend less on Algeria and give Russian gas a definitive slip.

The moment chosen for the first trip —at least, in the form of an official visit— of the Qatari leader to Spain could not be more propitious. First, because Europe is desperately seeking formulas to square the intricate energy circle after making clear its ambition to cut ties with Moscow. Second, because the relationship with Algeria —until recently, the leading Spanish gas supplier— is not exactly going through its best moment and any alternative is viewed favorably both in La Moncloa and in the main centers of energy power. And third, because after the bitter pill of covid —and with a weaker recovery than initially expected— investment manna has a special meaning.

The announcement came during the gala dinner held on Tuesday night at the Royal Palace. In the speech that he had written, the emir assured that he had given immediate “instructions” “to increase our successful investments in Spain, taking into account that Qatar is already one of the largest Arab investors in Spain.” However, when he read it, he added a figure (5,000 million dollars, 4,720 million euros) that did not appear in the text distributed to the press and that went unnoticed at first: his words were in Arabic, without translation into English nor to Spanish. Until a member of his entourage spread the news.

Geopolitics, energy and money have never been synonyms as perfect as they are today. Qatar plays the game of the energy crisis with the best possible cards. The small and very rich Arab country —less than three million inhabitants; almost three times the per capita income of Spain—has to its credit the third largest natural gas reserves in the world, only behind two infinitely larger nations—Russia and Iran—and plans to increase its export capacity by ship. Being the second largest seller of liquefied gas in the world is not enough.

The lifesaver, however, will not be immediate. In the midst of a Western flight from Russian energy, official Qatari sources acknowledge in statements to EL PAÍS that, in the immediate term, their ability to increase sales is limited: “In the short term we can only export 15% more.” After Madrid, Al Thani has passed through Berlin, the great European capital most in need of alternatives to Russian gas. His commitment to them has been clearer: Qatari gas will start arriving in Germany in just two years.

European and Qatari interests, however, are not entirely aligned: knowing that the energy transition will necessarily reduce the demand for fossil fuels, the former want short-term contracts. Doha, on the other hand, is looking for “very long-term” agreements: gas, they consider, will continue to be present in the energy matrix for longer than initially planned. And the investments necessary to export gas on a large scale require a long horizon of sustained cash flows over time.

Although energy and investment accounted for most of the talks between the two countries, it was by no means the only topic that was touched upon. The Qatari sources consulted by this newspaper confirm that there was also talk of the nuclear agreement with Iran. Unlocking this negotiation, stalled in recent months, is a condition sine qua non for the return of its oil to the international market.

All Spanish institutions turned to Tamin bin Hamad Al Thani. In an unusual gesture, the king approached the Palacio del Pardo on Monday afternoon, the residence of foreign heads of state visiting Spain, to greet him before the official reception took place the next day. The Government awarded the Collar of the Order of Isabella the Catholic to the emir and the Grand Cross (a lower grade of the same distinction) to the sheikha, Jawaher Bint Hamad Bin Suhaim Al Thani. And the Madrid City Council handed him the golden keys to the capital, while its mayor, José Luis Martínez-Almeida, assured that Spain and the emirate are “the definitive argument” against those who consider the monarchical regime to be a vestige of the past. .

Faced with the rain of millions, the Spanish authorities have chosen to mute criticism of the human rights situation in the guest’s country, which led Amnesty International and other NGOs to sue FIFA for 440 million dollars (about 420 million euros) to compensate the migrant workers who have built the infrastructure for the World Cup in Qatar —which will be held in November— for the “mistreatment” they allegedly suffered.

The only discordant note was put by Pablo Echenique, spokesman in the Congress of Podemos, the minority partner of the coalition government, who described the emir of Qatar as a “theocrat” and accused his regime of “massacreing” the rights of the LGTBI community and women. The King, for his part, in his speech at the Royal Palace encouraged his illustrious guest to “advance towards ever greater horizons of civil rights and public liberties”, while congratulating him on “the reforms aimed at improving the conditions of workers or the significant level of integration of Qatari women in the world of work”.

In the last long decade, the footprint of Qatari money in the Spanish economy has grown exponentially: the sovereign fund of the emirate is, since 2011, a reference shareholder of the electricity giant Iberdrola, the largest listed company on the Ibex; and since 2015 it is also from El Corte Inglés. It also has control positions in Colonial and in the Spanish-British group of airlines IAG —the owner of Iberia, British Airways or Vueling—. A Qatari investor also owns 5.1% of PRISA, the publisher of EL PAÍS.

Diesel more expensive, but guaranteed: this is how the veto on Russian oil will affect the Spanish | Economy

Where Is Sumac Used In Which Meals? How to Consume Sumac?

2 killed in shooting at hospital

Oppositions 2022: These are the 45,000 public employment positions that the Government puts out to tender | Economy

The number of people fleeing violence exceeds 100 million for the first time due to the war in Ukraine | International
May 23, 2022

The five main economies of Latin America will be governed for the first time by the left | International
October 30, 2022

Germany, on guard against the dreaded ‘winter of rage’ | International
September 12, 2022

Germany, on guard against the dreaded ‘winter of rage’ | International

Derek Chauvin: The agent who killed George Floyd, sentenced to another 21 years in prison for violating his civil rights | International
July 8, 2022

Derek Chauvin: The agent who killed George Floyd, sentenced to another 21 years in prison for violating his civil rights | International