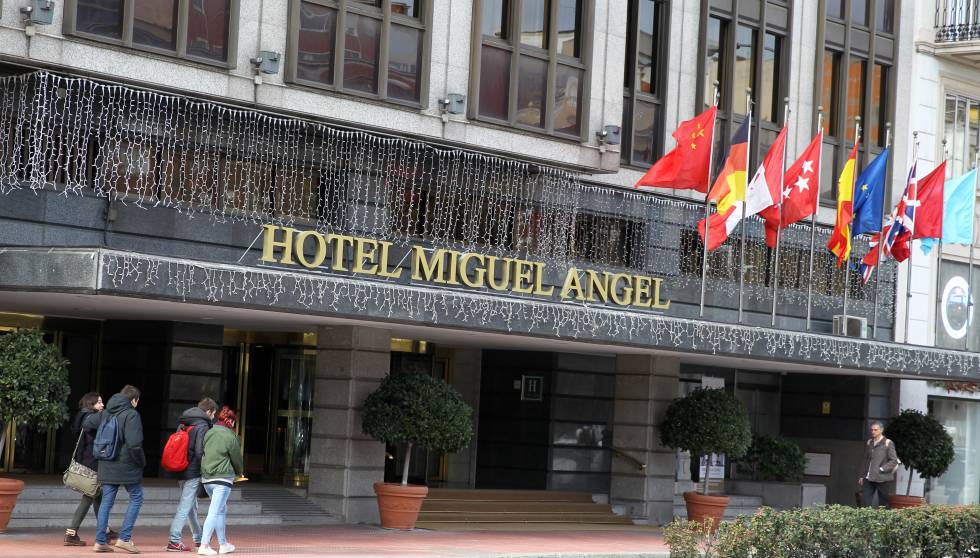 One of the great five-star hotels in Madrid, the Miguel Angelmay change hands shortly, becoming one of the major operations in the hotel sector for this year, both because of how emblematic the asset is and because of its size. Bain Capital and Stoneweg currently exclusively negotiating the purchase of the establishment from the British-Iraqi businessman nadhmi auchias confirmed by sources familiar with the process.

The purchase of the hotel, which could be closed in the coming weeks, will also entail the change of the current operator, the chain of Balearic origin Bluebay, since Bain and Stoneweg will arrive from the hand of another brand that manages the luxury hotel.

The amount of the transaction is, at the moment, unknown, but the sources consulted speak of a figure that is close to 200 million of euros. This hotel, opened in 1977, has 267 rooms. Nearby, the Mexican investment vehicle RHL paid 1.4 million euros per room at the Villa Magna hotel, in a 2018 operation valued at 210 million.

It is not expected that these figures will be reached in the Miguel Ángel, since the property needs a strong investment in reforms, according to sources in the tourism sector. Even so, it could reach 800,000 or 900,000 euros per room, which due to the size of the hotel would become one of the largest operations for a single asset, exceeding 200 million in the transaction. Other sources lower the figure below that threshold.

The hotel currently belongs to Auchi, a businessman born in Baghdad and naturalized British in the eighties. He is a billionaire who develops various types of businesses through General Mediterranean Holding, such as hotels, real estate, health, energy or banking.

In recent years, it was known in the real estate sector that the British-Iraqi businessman was open to the sale of the Miguel Ángel hotel, but without fruiting any operation.

Located at number 31 Calle de Miguel Ángel, next to Paseo de la Castellana, in the Almagro neighbourhood, the hotel has traditionally been a tourist and business destination, with a similar profile to its neighboring Wellington and Intercontinental. The arrival of the partners Bain Capital and Stoneweg would allow one more renovation in the main luxury hotels in the city. The Mexican firm RLH has refurbished the nearby Villa Magna, following its purchase from Dogus, and is now operated by the US firm Rosewood. RHL was also made last year with Velázquez’s Bless Collection for 115 million.

Likewise, Mandarin Oriental has been operating the historic Ritz since last year after a major refurbishment. In the new five-star offer, the Four Seasons in Canalejas also stands out; the Hyatt on Gran Vía, and the reopening of the Santo Mauro as a Luxurt Collection, also in the Almagro neighbourhood.

Another acquisition for the partners

The US firm Bain Capital partnered with the Swiss Stoneweg -promoted by the Spanish Jaume Sabater and Joaquin Castellvi– in a joint vehicle that acquires hotel assets. They have already bought the Andalucía hotel, with 400 rooms, in Puerto Banús, which after its renovation will be operated by Hard Rock. In 2022 they have acquired Los Monteros in Marbella, Mimic in Barcelona and recently Don Carlos (168 rooms) in Ibiza. In the alliance, Bain acts as majority shareholder and Stoneweg as manager and sole owner.

In Spain, Bain also has interests in real estate through its developer Habitat and, for its part, Stoneweg in various projects such as the two towers called Skyline, designed by Touza Arquitectos, on Paseo de la Dirección in Madrid.

An expert team of 50 people works for the Old City of Van.

The lessons of Afghanistan: the change of strategy of the foreign policy of Washington | International
August 15, 2022

The lessons of Afghanistan: the change of strategy of the foreign policy of Washington | International

Germany: Schröder sues the Bundestag for cutting his privileges as former chancellor in response to his closeness to the Kremlin | International
August 12, 2022

Germany: Schröder sues the Bundestag for cutting his privileges as former chancellor in response to his closeness to the Kremlin | International

Netanyahu tries to monetize his rejection of the gas agreement with Lebanon at the polls | International
October 13, 2022

Moroccan women speak out against the stigma of prostitutes suffered in other Arab countries | International
July 23, 2022

Disappeared on the front line of a war in the Amazon | International
June 12, 2022