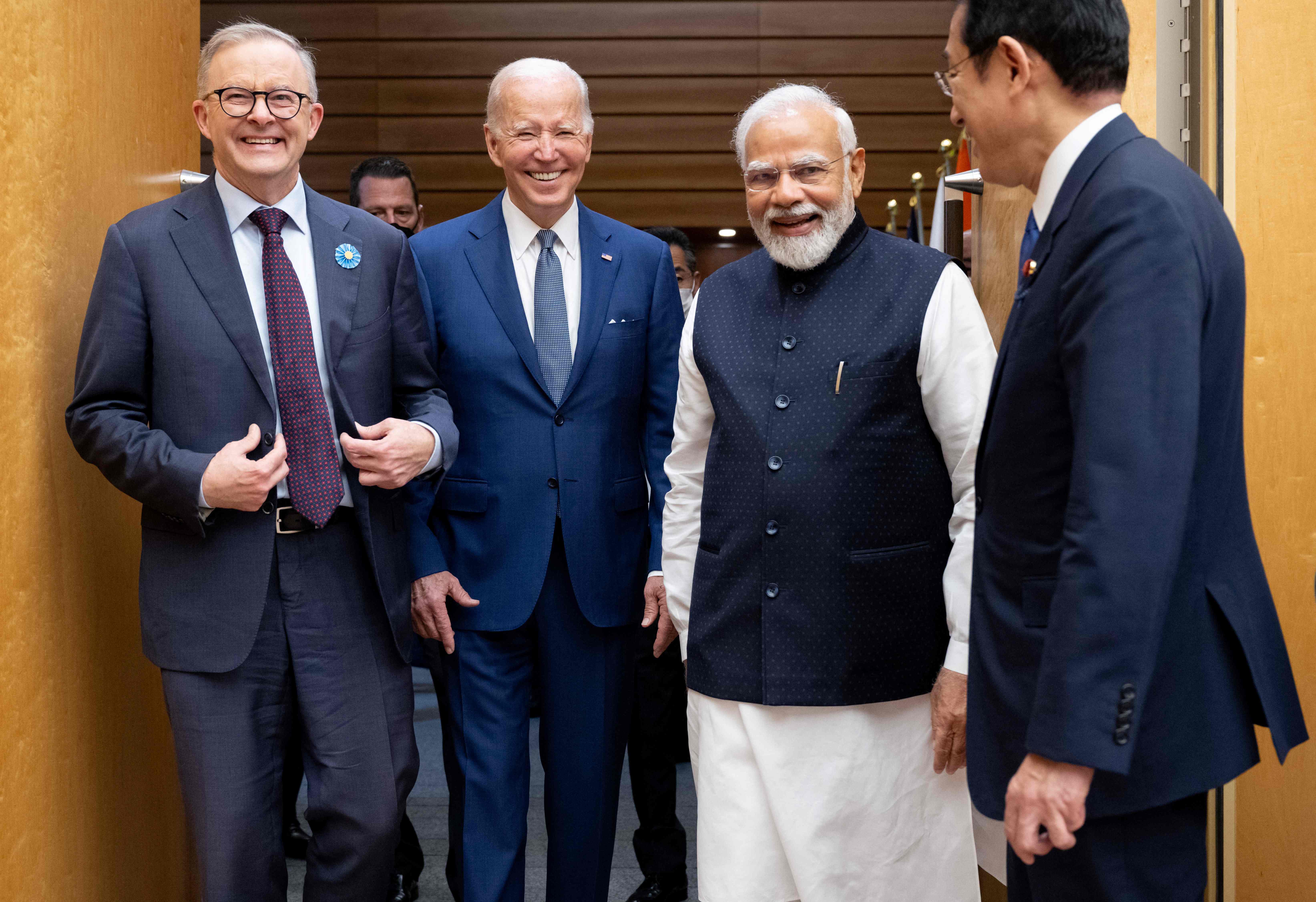 The echoes of the war in Ukraine have been felt this Tuesday in Tokyo. The four leaders of the Quad, the informal alliance that brings together democracies as disparate as the United States, Japan, Australia and India, have had the Russian invasion in mind to warn that they will not tolerate a repetition of a similar act – or their steps previous—in the Indo-Pacific region. They are opposed, they have assured in the final statement after the meeting, to “any coercive, provocative or unilateral action that tries to change the status quo” in the zone. The recipient of the alert was not mentioned by name, there was no need. Everyone knew it: China.

The Russian invasion came to the fore again and again at the summit, the second in person of this informal alliance created in its day to respond to the 2004 tsunami in Southeast Asia, and rescued and reconverted almost three decades later into a cooperation mechanism between four democracies in the four corners of the Indo-Pacific region and who share their concern about Beijing’s growing influence in the area.

“This is about democracies against autocracies, and we have to make sure that we comply,” said US President Joe Biden at the beginning of the summit, which concluded with the holding of this event and bilateral meetings with each of the partners, a five-day tour of Asia. “The Russian assault on Ukraine underscores the importance of the fundamental principles of international order, territorial integrity and sovereignty. International law and human rights must always be upheld, regardless of where they are violated,” he stated. The host of the meeting, Japanese Prime Minister Fumio Kishida, joined the thesis. The war in Ukraine, he stressed, represents “a serious incident that has fundamentally shaken the international order based on the rule of law.” “We must not allow things like this to happen in the Indo-Pacific.”

The brand new head of the Australian Government, Labor Anthony Albanese – winner of the elections on Saturday and arrived immediately after his investiture on Monday – agreed. “Our Quad alliance is more necessary than ever to respond to the challenges and threats of a world with less certainty; to transform that world for the better and build a stronger Indo-Pacific region, with more collaboration, that respects sovereignty”.

Indian Prime Minister Narendra Modi was the only one who did not speak out explicitly against the Russian occupation. His country has important defense ties with Moscow and, like China, systematically avoids condemning the actions of the government of Vladimir Putin. The New Delhi representative chose to highlight the Quadrangle’s “mutual cooperation” in other, less contentious areas, from bolstering supply chains to vaccine distribution, to “continue to strengthen the Quad’s image as a force for good.” . Later, the White House indicated that in the bilateral between the two, Biden emphasized to Modi the global consequences of the war in Ukraine.

In an apparent deference to India’s position, the final statement does not explicitly mention Russia. Instead, the text maintains that the four leaders “addressed their respective responses to the conflict in Ukraine and the ongoing tragic humanitarian crisis.”

But the great protagonist in absentia, and the reason for the summit, was China. Many of the initiatives agreed upon at the meeting have been agreed with her in mind, from greater cooperation for the distribution of vaccines – which counteracts what Beijing is carrying out in other Asian countries – to a fund of 50,000 million dollars for the infrastructure development in the region, a response to the projects that China undertakes within its New Silk Road initiative.

The final communiqué devotes special attention to Chinese maritime activities, one of the main sources of friction between the Asian giant and the components of the Quad, and mentions the “challenges to the maritime order based on laws, including in the South Seas and the East China”. In the East, Beijing and Tokyo claim sovereignty over the Diaoyu/Senkaku Islands. In the South, China, which claims control of 90% of the waters and has disputes with half a dozen countries, has built a series of artificial islets that it has turned into military bases.

The conclusions of the meeting refer to “the militarization of disputed points, the dangerous use of coast guard ships and maritime militias, and attempts to interrupt the activities of exploitation of marine resources by other countries.” All of them practices of which China has been accused. The four countries have agreed to create a mechanism that will monitor the activities of fishing fleets and possible Chinese maritime militias via satellite, and that will also be used for humanitarian purposes.

The question of Taiwan, which China considers part of its territory and does not renounce to unify by force, also hung over the meeting. A day earlier, Biden had appeared to end the strategic ambiguity that his country had maintained for four decades, by assuring that it would come to the island’s defense militarily if China invaded it. This Tuesday, on the other hand, he answered a journalist’s question about whether he had put an end to that policy with a resounding “no”. “The policy has not changed at all. I said it when I made my statement yesterday,” added the US president.

Following Biden’s statement on Monday, the second since October in which he appeared to confirm the change in US policy, China warned Washington that it is “playing with fire.” The United States “uses the Taiwan card to subdue China, and it will burn,” said Zhu Fenglian, the spokeswoman for the government’s Taiwan Affairs Office in Beijing.

By admin
Recent Posts
Latest News
Facebook Twitter WhatsApp Telegram
Back to top button
Close
Featured Posts
The first trip to Easter Island after the pandemic: “We were in bad shape, tourism blinded us” | Culture
August 9, 2022

The first trip to Easter Island after the pandemic: “We were in bad shape, tourism blinded us” | Culture

War in Ukraine: kyiv asks refugees not to return in winter due to energy crisis caused by Russian attacks | International
October 26, 2022

War in Ukraine: kyiv asks refugees not to return in winter due to energy crisis caused by Russian attacks | International

Spain and Germany withdraw their troops from Mali while NATO warns of the risks in the Sahel | International
July 1, 2022

The first ship with the Ukrainian grain blocked by the Russian invasion departs from Odessa | International
August 1, 2022

The note from the author of the Virginia Walmart shooting: “They laughed at me and said I was a serial killer” | International
6 days ago